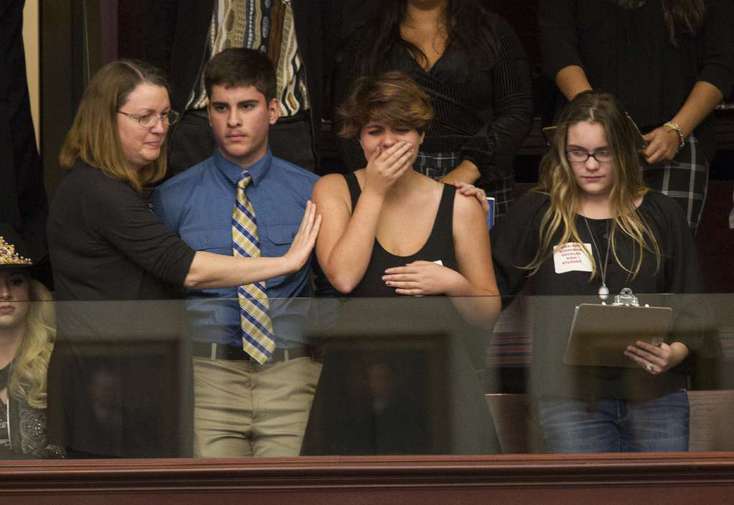 FLORIDA REPUBLICANS RUSH TO DEFEAT ASSAULT WEAPON BAN.  “Less than a week after 17 people were fatally shot at a Florida high school, the state House has voted down a motion to take up a bill that would ban assault rifles, effectively killing the measure for this session,” the AP reports.

The motion failed by a 36 to 71 vote, with 13 not voting.   Every NO vote came from a Republican. Every one.  And they voted no in front of 100 students from Parkland who had traveled to Florida’s capital today in the hopes that the state legislature would act on an assault weapons ban in the wake of the school shooting last week.

Meanwhile, Newt Gingrich told Fox News that the only long-term solution to school shootings is to train teachers and administrators in the use of guns.  Said Gingrich: “I think the only long-term solution, depending on the size of the school, is a minimum of six to eight teachers and administrators who are trained in the use of firearms and have conceal carry permits and are prepared to defend the kids.”

“The device was used by the shooter who opened fire on a country music festival in Las Vegas in October, immediately prompting calls for lawmakers to take action and ban such devices. At the time, the White House and the National Rifle Association made clear that they were open to the idea, but no action was taken.”

I will want to commend Trump until I actually see the regulation enacted.  A Memo ordering Sessions to come up with such regulations is not the same as an Executive Order banning them outright.

First Trump did everything in his power to help Russia interfere in the election. Now he's blaming Obama for failing to stop it. https://t.co/izpCFbVqad pic.twitter.com/tciXwcctLn

TOOMEY TO INTRODUCE BACKGROUND CHECK BILL.  Sen. Pat Toomey (R-PA), who once spearheaded an unsuccessful bipartisan agreement to strengthen gun laws, told the Washington Post that “he plans to introduce legislation in the coming weeks that would expand background checks on firearm purchases, giving a jolt to gun-control efforts in the wake of last week’s mass shooting in Florida that killed 17 people and left scores injured.”

Said Toomey: “It does feel like we have a shot at getting a little bit of momentum on background checks. We’re going to take a swing at that and I’m hoping we’ll be able to do it.”

PENCE AND NORTH KOREA ALMOST HAD A SECRET MEETING. Vice President Pence “departed for a five-day, two country swing through Asia earlier this month having agreed to a secret meeting with North Korean officials while in South Korea at the 2018 Winter Olympic Games,” the Washington Post reports.

“But on Saturday Feb. 10, less than two hours before Pence and his team were set to meet with Kim Yo Jong, the younger sister of North Korean leader Kim Jong Un, and Kim Yong Nam, the regime’s nominal head of state, the North Koreans pulled out of the scheduled meeting, according to Pence’s office.”

Over the long run, the new Pennsylvania map is worth only 1-2 seats for Democrats. But there could be additional upside in blue-leaning environments like the one we'll probably get in November. https://t.co/hCrdi1H5G6

First Read: ” This new map is the most consequential midterm development of 2018, and it’s going to produce a chain of events (members hunting for new districts, member-vs.-member races, possible retirements, even more lawsuits) that we’ll be following all year long.”

DEMS MAINTAIN MASSIVE LEAD, AND LARGE MAJORITIES WANT ACTION ON GUNS. A new Quinnipiac poll finds American voters prefer Democrats in control of Congress by 15 points, 53% to 38%, including independent voters by 47% to 36%.  For comparison, the FiveThirtyEight polling average shows Democrats with a 48.3% to 39.7% lead.

The same Quinnipiac poll also finds American voters disapprove of President Trump’s plans for a military parade, 61% to 26%.  Every listed party, gender, education, age and racial group disapproves except Republicans, who approve 58% to 24%.

Further, the poll finds American voters support stricter gun laws, 66% to 31%, the highest level of support ever measured by the poll, with 50% to 44% support among gun owners and 62% to 35% support from white voters with no college degree and 58% to 38% support among white men.  In addition, Americans support a nationwide ban on the sale of assault weapons, 67% to 29%, and a mandatory waiting period for all gun purchases, 83% to 14%.  Support for universal background checks is itself almost universal, 97% to 2%, including 97% to 3% among gun owners.

A new Washington Post-ABC News poll finds that 77% of Americans say Congress is not doing enough to prevent mass shootings and 62% say the same of President Trump.  But Americans are roughly split on an assault weapons ban, with 50% in support and 46% opposed, a stark contrast from the 80% support for the ban in 1994, the year it was enacted. The current level of support is little different from 51% in 2016.

WHY TRUMP ENDORSED ROMNEY. Jonathan Swan: “He could either endorse Romney, stay silent, or oppose the man he likes to say ‘choked like a dog’ in the 2012 election. Either of the latter two options would have resulted in cable news blaring “Utah rejects Trump” headlines after an eventual Romney win. Now Trump can claim credit for Romney’s victory, and be on the side of a winner.”

Said a GOP source: “This was totally predictable.  The President who (usually) has good political instincts got ahead of any stories (which press is dying to write) about a Romney victory (primary) being a repudiation of Trump, by endorsing him so now Trump can take credit for win and say it’s because he endorsed!”

In light of the Mueller indictment, it's time to revisit that episode where leading Republicans refused to show a public, bipartisan united front against Russian sabotage.

By blasting Obama, Trump has unwittingly invited this inquiry.

STOP BLAMING WASHINGTON OR CONGRESS.  Catherine Rampell: “Dysfunctional Washington refuses to work out its differences to solve problems that matter to Americans. So say pundits and policy activists, perhaps hoping that diffuse criticism, rather than finger-pointing, will yield a government willing to govern. But the problem isn’t ‘Washington.’ It isn’t ‘Congress,’ either. The problem is elected officials from a single political party: the GOP.”

THE MIDTERM BATTLEGROUND. Ron Brownstein: “The clearest opportunity for Democrats is the relatively few remaining Republican-held districts in blue metro areas with large populations of college-educated whites, and in many cases substantial minority and youth populations as well. These are places crowded with voters who tilt toward liberal positions on social issues and recoil from Trump’s volatile persona, particularly the way he talks about race.”

“The next bucket of seats is demographically similar to the red pockets but politically distinct because they are in metro areas that lean much more reliably toward the GOP. I call this group of seats Romneyland because they are filled with voters who resemble Romney demographically and ideologically: professionals and corporate middle managers who want a president who will shrink government and even pursue a center-right social agenda, but also exude professionalism and decorum.”

“The third key test for Democrats is the districts I call ‘blue-collar blues.’ These are the blue-collar, exurban, small town and rural seats in states that generally lean Democratic.”

JUST LIKE NIXON’S FINAL DAYS. Former Nixon speechwriter David Gergen told CNN that President Trump’s erratic tweeting “reminds me very much of the last days of President Nixon when he became deeply, deeply insecure, lashed out in all sorts of ways and didn’t remain focused on the job at hand. But this, I’m afraid, has been President Trump’s pattern for some time.”

He added: “I don’t know why he is so insecure. It certainly suggests that as Mueller closes in more, that there is he very much does not want us to know, and he is very afraid that Mueller is going to get there.”

MOSCOW PAGEANT WAS THE PRELUDE. Jeffrey Toobin looks back at Donald Trump’s decision to hold the 2013 Miss Universe competition in Moscow.  “Trump has long viewed his businesses as mutually reinforcing, with all the products—from hotels to steak, vodka to golf resorts—complementing one another… Today, the Miss Universe pageant in Moscow looks like a harbinger of the Trump campaign and Presidency, featuring some of the same themes and characters. Miss Universe represents a paradigmatic example of Trump’s business style in action—the exaggerations that teeter into lies, the willingness to embrace dubious partners, the hunger for glamour and recognition.”

MANAFORT TRANSACTIONS UNDER NEW SCRUTINY.  “Federal law enforcement officials have identified more than $40 million in ‘suspicious’ financial transactions to and from companies controlled by President Donald Trump’s former campaign manager Paul Manafort — a much larger sum than was cited in his October indictment on money laundering charges,” BuzzFeed Newsreports.

“The vast web of transactions was unraveled mainly in 2014 and 2015 during an FBI operation to fight international kleptocracy that ultimately fizzled. The story of that failed effort — and its resurrection by special counsel Robert Mueller as he investigated whether the Trump campaign colluded with Russia to interfere with the 2016 election — has never been fully told.”

"They were all lying" – Fmr. Trump aide @NunbergSam on Pence, Conway and Manafort denying Trump campaign meetings with Russia: pic.twitter.com/u8Q8KHBi3u