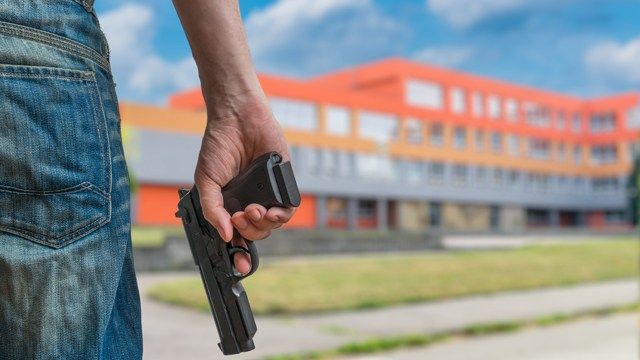 Spoiler: There’s nothing is his column saying that “Red America” needs to show respect for “Blue America”, or that “Blue America” has a role or a say in stopping gun violence.

*His framing of Blue and Red America is something I (and polling) disagree with, since over 70% of Americans support some sort of gun laws (88% for background checks). Those numbers make Brooks’ stereotyping of Red and Blue America lazy and untrue, but I’ll use his framing throughout this post for consistency.

The column, titled: Respect First, Then Gun Control, is actually two columns, fused together under the banner of “Blue America” needs to be nicer to misunderstood “Red America”. Column 1 starts off with:

Many of us walked this emotional path. But we may end up doing more harm than good. If there’s one thing we’ve learned, it is that guns have become a cultural flash point in a nation that is unequal and divided. The people who defend gun rights believe that snobbish elites look down on their morals and want to destroy their culture. If we end up telling such people that they and their guns are despicable, they will just despise us back and dig in their heels.

So if you want to stop school shootings it’s not enough just to vent and march. It’s necessary to let people from Red America lead the way, and to show respect to gun owners at all points. There has to be trust and respect first. Then we can strike a compromise on guns as guns, and not some sacred cross in the culture war.

That’s it. That’s pretty much all of the first half of his column. People who believe in some form of gun laws get no say. Brooks tells us to sit down and shut up, respectfully, and let “Red America” take the lead.

I have no idea what that “lead” would look like. Given the poll numbers, I’d say the majority of Americans have been stating, quite clearly, that they support stricter gun laws.

A majority of Americans, including of Republicans, have supported stricter gun laws for some time. A survey conducted in October of last year by Morning Consult and Politico found that 88 percent of respondents backed the idea that all gun purchases should require a background check. Almost the same number, 84 percent, said that private gun sales (including those at gun shows) should also depend on a background check.

A significant majority, 76 percent, supported a waiting period after a firearms purchase, and an identical proportion supported creating a national database of gun sales. Those numbers are especially remarkable when you consider that, according to a June 2017 Pew Research Center poll, 41 percent of Americans either own a gun or live with someone who does. In other words, a significant proportion of gun owners appear to support increased regulations.

Self-identified Republicans also support many proposed restrictions. In Pew’s survey, 77 percent of Republican respondents favored background checks for gun sales at shows or for private transactions. An even larger number, 85 percent, supported not allowing people whose names appear on the federal “no fly” list to own guns.

A majority of Pew’s Republican respondents, 56 percent, also supported the creation of a national gun sales database, and 54 percent supported a federal ban on “assault weapons” (a term with no fixed legal definition).

So who, exactly, is Brooks demanding we show respect to on all points? And why isn’t he calling for respect all around?

I’ve been blogging since 2008, and there’s nothing that generates hits like a gun post. They are usually completely predictable. There will be endless comments over the exact – and I mean exact – make and model of guns. Do not follow them down that deflection rabbit hole. There will be lots of talk, with very few links, of the need for a “good guy with a gun”, which is complete fantasy and a favorite NRA talking point because… gotta sell more guns! There will be talk about the 2nd Amendment and they’re 100% certain of what it means, even though Constitutional scholars disagree. There will be talk about inner city gun violence without ever acknowledging the people fighting to fix this problem (they’ll pretend that we don’t care about this), or admitting how guns end up in cities with tight gun control laws (Hint: porous borders and a black market enabled by not knowing who is buying all these guns and reselling them). There will be attempts to frame people who support stricter guns laws as people who want to take everyone’s gun away. There will be talk about protecting themselves and their family, even though statistics show that you and your family are less safe with a gun in the home. There will be fear. Lots and lots of fear, camouflaged in a super hero cape.

The gun culture has changed in my lifetime. Gun owners use to never lead with their owning a gun. They simply owned one, and it never mattered to them if you knew about it. Many of today’s gun owners employ tactical/military language while sitting in their white, suburban communities. They talk endlessly about their guns and their fantasies of how and when they’ll use them. Their selfies are full of them posing with their guns. (WTF is that about?) It’s also why every time people say, “We never expected this to happen here” I say, “It always happens there.”

The second part of Brooks’ column doesn’t tie in with his stated premise in the first half.

So I’ve been thinking about a group that’s in the trust and respect business. Better Angels is a nonprofit led by David Lapp, David Blankenhorn and a prominent family therapist, Bill Doherty. The team members travel from town to town finding members of the Red and Blue Tribes and bringing them together for long, humbling conversations.

I have no problem with Better Angels or their work. I do have a problem that this is Brooks’ response to 17 dead children and teachers. Make no mistake, this is his response. His opening paragraphs tell us exactly who he sympathizes with. It’s his view that “Blue America” is mean to “Red America”, that “Blue America” needs to show respect. That isn’t a two-way street for Brooks, btw.

We don’t really have policy debates anymore. We have one big tribal conflict, and policy fights are just proxy battles as each side tries to establish moral superiority. But just as the tribal mentality has been turned on, it can be turned off. Then and only then can we go back to normal politics and take reasonable measures to keep our children safe.

The ultimate both-siderism argument. Not to mention that he doesn’t discuss a single policy, or what reasonable measures he’d suggest be taken – Let alone what “Red America” should compromise on, or do to take the lead. Be respectful to them, or another child gets shot?

The first half of his column tells you all you need to know. “Red America” are victims. They are misunderstood, and until “Blue America” gives them respect on all points then children will keep dying, and that will be “Blue America’s” fault, cause we’re mean, or something.

14 comments on “David Brooks: “If you want to stop school shootings… It’s necessary to let people from Red America lead the way, and to show respect to gun owners at all points.””