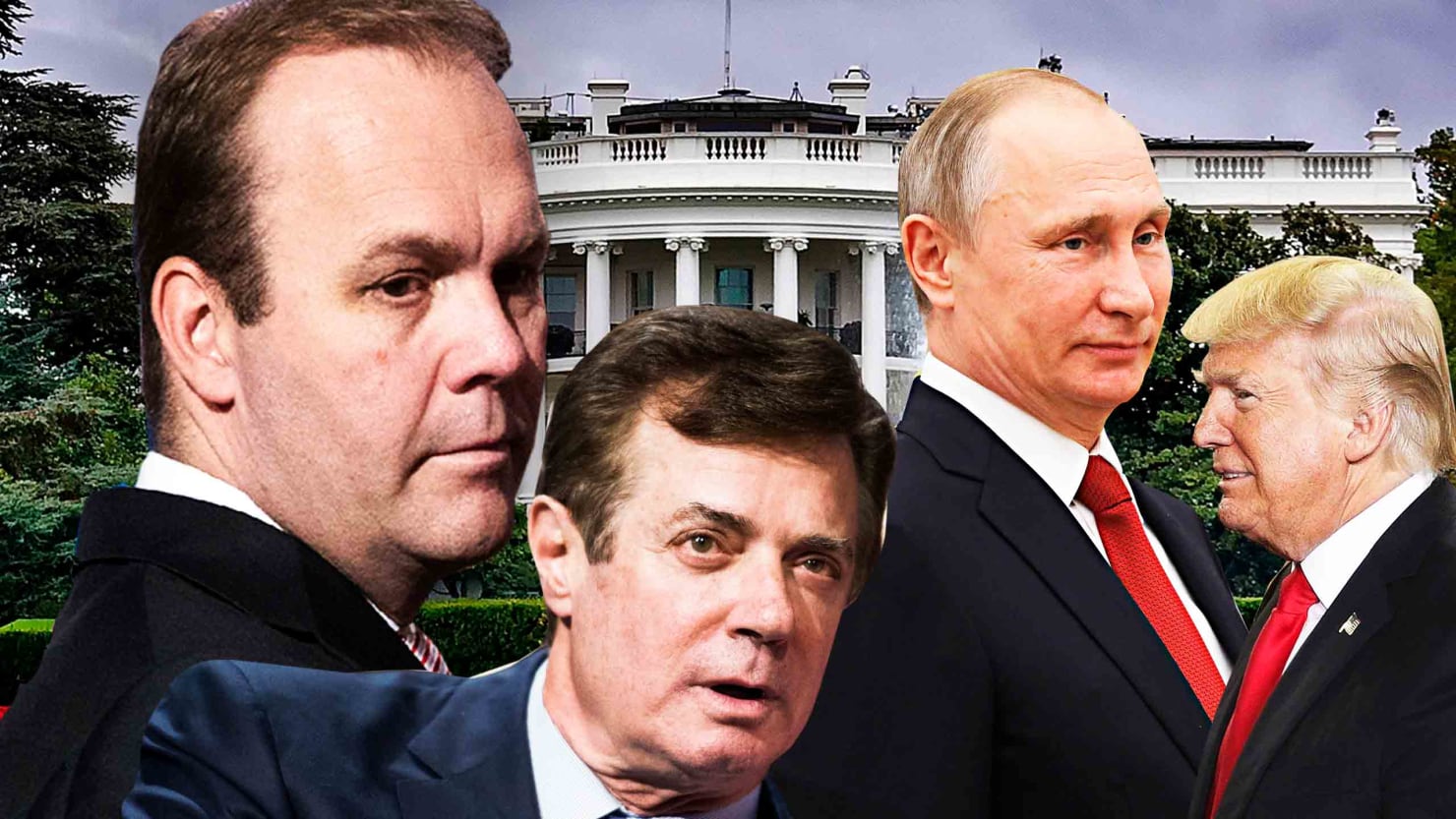 Rick Gates “will plead guilty to fraud-related charges within days – and has made clear to prosecutors that he would testify against Paul Manafort,” the Los Angeles Times reports.

According to a person familiar with those talks, Gates, a longtime political consultant, can expect “a substantial reduction in his sentence” if he fully cooperates with the investigation. He said that Gates is apt to serve about 18 months in prison.

Josh Marshall says this is very bad news, but for who?  “We don’t know much about what cooperation Gates has promised. We shouldn’t assume any more than that he has agreed to cooperate in helping the special counsel get guilty verdicts on the crimes Manafort has already been charged with – again, various kinds of financial crimes. Perhaps Gates knows about Russia/collusion stuff himself – the investigators may not know the full details themselves yet. But that doesn’t seem to be what’s going on here.

In any case, the case against Manafort appears to strong. Having his top deputy cooperating only makes it stronger. We’re still back to what does Manafort know? Does he know anything that he can use to avoid a lengthy prison terms? And if he does, will he reveal it to save himself?’

As the idiocy squirms … 45* desperately tries to trigger his base https://t.co/Bw4vyQNsoW

“President Trump, in a series of angry and defiant tweets on Sunday morning, sought to shift the blame to Democrats for Russia’s virtual war to meddle in the 2016 election, saying that President Obama had not done enough to stop the interference and denying that he had ever suggested that Moscow might not have been involved,” the New York Times reports.

Tweeted Trump: “If it was the GOAL of Russia to create discord, disruption and chaos within the U.S. then, with all of the Committee Hearings, Investigations and Party hatred, they have succeeded beyond their wildest dreams.”

Politico: “He did not criticize Russia, or voice concern over Vladimir Putin’s attempts to undermine U.S. elections.”

Washington Post: “Trump, ensconced at Mar-a-Lago, has so far stayed away from the golf course even though the weather has been sunny and almost 80 degrees — in what aides describe as showing respect for the 17 killed in a mass school shooting in Florida this week. The president has instead, spent much of his time watching television and tweeting.”

Karen Tumulty: “Imagine how history would have judged Franklin D. Roosevelt in the aftermath of Pearl Harbor, if he had taken to the radio airwaves to declare that Tokyo was “laughing their asses off.” Or if George W. Bush had stood in the rubble of the World Trade Center with a bullhorn and launched a name-calling tirade against the Democrats.”

“There was no loss of life or destruction of a city in the Russian actions described in a sweeping indictment secured by special counsel Robert S. Mueller III. But it was an act of war nonetheless, a sneak attack using 21st-century methods.”

“These are the moments that test a country — and a president. They call for bringing people together in a sense of national purpose against a common adversary. Once again, Trump has failed that test.”

Cameron Kasky, a junior at Marjory Stoneman Douglas High School: “My message for the people in office is: you’re either with us or against us. We are losing our lives while the adults are playing around.” (via CNN) https://t.co/ShcPmXgXJR

Former Vice President Joe Biden “is tiptoeing toward a potential presidential run in 2020, even broaching the possibility during a recent gathering of longtime foreign policy aides,” the AP reports.

“He said he was keeping his 2020 options open, considering it a real possibility. He insisted he had made no decision, and didn’t need to yet, according to five people who either attended the meeting or were briefed on it by those who did.”

“Biden also expressed interest in bringing those in the room onto his team if he decides to launch a campaign. At the same time, he gave them an out: There would be no hard feelings if they decided they were content in their current roles outside of government, said the people, who demanded anonymity to discuss a private meeting.”

"Our job is to go to school, learn and not take a bullet. You need to figure this out. That's why you were unfortunately elected." pic.twitter.com/BJ3et4rKrI

“Teen survivors of the school shooting massacre in Florida last week are calling for a march on Washington to demand action on gun control,” ABC News reports.

Washington Post: “The Trump administration’s extraordinary 11th-hour strategy to sabotage the bill showed how, after weeks of intense bipartisan negotiations on Capitol Hill, it was the White House that emerged as a key obstacle preventing a deal to help the dreamers.”

“The episode reflected President Trump’s inability — or lack of desire — to cut a deal with his adversaries even when doing so could have yielded a signature domestic policy achievement and delivered the U.S.-Mexico border wall he repeatedly promised during the campaign.”

“Along the way, Trump demonstrated the sort of unpredictable behavior that has come to define his topsy-turvy tenure, frequently sending mixed signals that kept leaders in both parties guessing.”

“For months, Republican leaders watched in horror as hordes of their most sought-after midterm recruits passed on running, spooked by what increasingly looked like an electoral beatdown in the making,” Politico reports.

“But leading GOP officials in recent weeks have seen their fortunes brighten — if only slightly — and the party is now scrambling to take advantage by luring otherwise reluctant candidates back into targeted races across the country.”

Rick Scott’s state agency called the Parkland mass murderer low risk. By his own cynical standard, he should resign. Will he? https://t.co/QXqGIE4786

Leonard Pitts on why even people who have never cared about a superhero movie, care about Black Panther.

It’s not that there have never been must-see black movies before, or even black movies that shook the Zeitgeist like a tree. In 1967, African Americans crowded into theaters to watch Sidney Poitier, as Det. Virgil Tibbs, slap a racist white Southern cotton planter who had slapped him first. In 1971, they turned out big to see Richard Roundtree as John Shaft redefine black movie masculinity, strolling through Times Square in a brown leather coat as the wah-wah guitars of that Isaac Hayes theme buzz-sawed behind him.

But no one ever bought out a movie theater to make sure little black kids saw Poitier’s “In The Heat of the Night.” Actress Octavia Spencer is doing just that in Mississippi; Detroit Free Press columnist Rochelle Riley and ESPN’s Jemele Hill are doing it in Motown; businessman Rodger Jackson is doing it in Chicago; and other philanthropists, churches, businesses and civic groups are doing it around the country.”

“Every day, the American public hears new stories of sexual assault and other forms of violence against women, some detailing decades of threats and abuse. How many more women must come forward before this country gets serious about this problem?

Things can be different. I have seen the possibilities. More than 25 years ago, I wrote a bill called the Violence Against Women Act. The law accomplished many good things: a national hotline for battered women; money for local shelters; new programs on campus assault; temporary housing for survivors; more education for victim advocates, judges and prosecutors. Remedies created by the Violence Against Women Act have saved lives and saved billions of taxpayer dollars. It helped to change America.

But often people forget that the law originally included more: a revolutionary civil rights remedy that gave victims the power, on their own, to sue wrongdoers for violations of the act.

Six years later, the Supreme Court killed it. In a 5-to-4 vote, the court struck down the civil rights remedy on the basis of the strange argument that adding a federal option usurped the role of the states. Then-Chief Justice William H. Rehnquist, who wrote the opinion, had lobbied against the law in Congress, demeaned it in speeches as a pointless “symbolic” effort, and implied that women would use the new law to extort money in divorces. Think about that: The idea was that women would make up stories about being violated to fatten their bank accounts.”

Thomas Friedman: “President Trump is either totally compromised by the Russians or is a towering fool, or both, but either way he has shown himself unwilling or unable to defend America against a Russian campaign to divide and undermine our democracy.”

“That is, either Trump’s real estate empire has taken large amounts of money from shady oligarchs linked to the Kremlin — so much that they literally own him; or rumors are true that he engaged in sexual misbehavior while he was in Moscow running the Miss Universe contest, which Russian intelligence has on tape and he doesn’t want released; or Trump actually believes Russian President Vladimir Putin when he says he is innocent of intervening in our elections — over the explicit findings of Trump’s own C.I.A., N.S.A. and F.B.I. chiefs.”

“In sum, Trump is either hiding something so threatening to himself, or he’s criminally incompetent to be commander in chief.”

The painful question: to what extent is helping for more Russian help next time part of Trump's political strategy for the 2018 elections? https://t.co/6acGH4QCwm

“President Trump began the weekend believing that something good had just happened to him. An indictment leveled against 13 Russians for interfering with the 2016 election had not accused him or anyone around him of wrongdoing. ‘No collusion’ was his refrain,” the New York Times reports.

“But once ensconced at his Florida estate on Friday, Mr. Trump, facing long hours indoors as he avoided breezy rounds of golf after last week’s school shooting a few miles away, began watching TV.”

“The president’s mood began to darken as it became clearer to him that some commentators were portraying the indictment as nothing for him to celebrate… Those commentators called it proof that he had not won the election on his own… What followed was a two-day Twitter tirade that was unusually angry and defiant even by Mr. Trump’s standards.”

Washington Post: “In a string of 10 Twitter messages — which began after 11 p.m. Saturday and ended around noon Sunday, and which included profanity and misspellings — Trump opened a window into his state of mind.”

Read this. Then question every scandalous story or conspiracy you believed about Hillary. You were the target of psychological warfare whether you believe it or not. https://t.co/1xBHC1IyRT

The Washington Post spoke to Marat Mindiyarov, one of the 13 Russians indicted by special counsel Robert Mueller last week, who described what it was like at the “troll factory” where he worked:

“I arrived there, and I immediately felt like a character in the book 1984 by George Orwell — a place where you have to write that white is black and black is white. Your first feeling, when you ended up there, was that you were in some kind of factory that turned lying, telling untruths, into an industrial assembly line. The volumes were colossal — there were huge numbers of people, 300 to 400, and they were all writing absolute untruths. It was like being in Orwell’s world.

My untruths amounted to posting comments. I worked in the commenting department — I had to comment on the news. No one asked me my opinion. My opinions were already written for me, and I had to write in my own words that which I was ordered to write.”