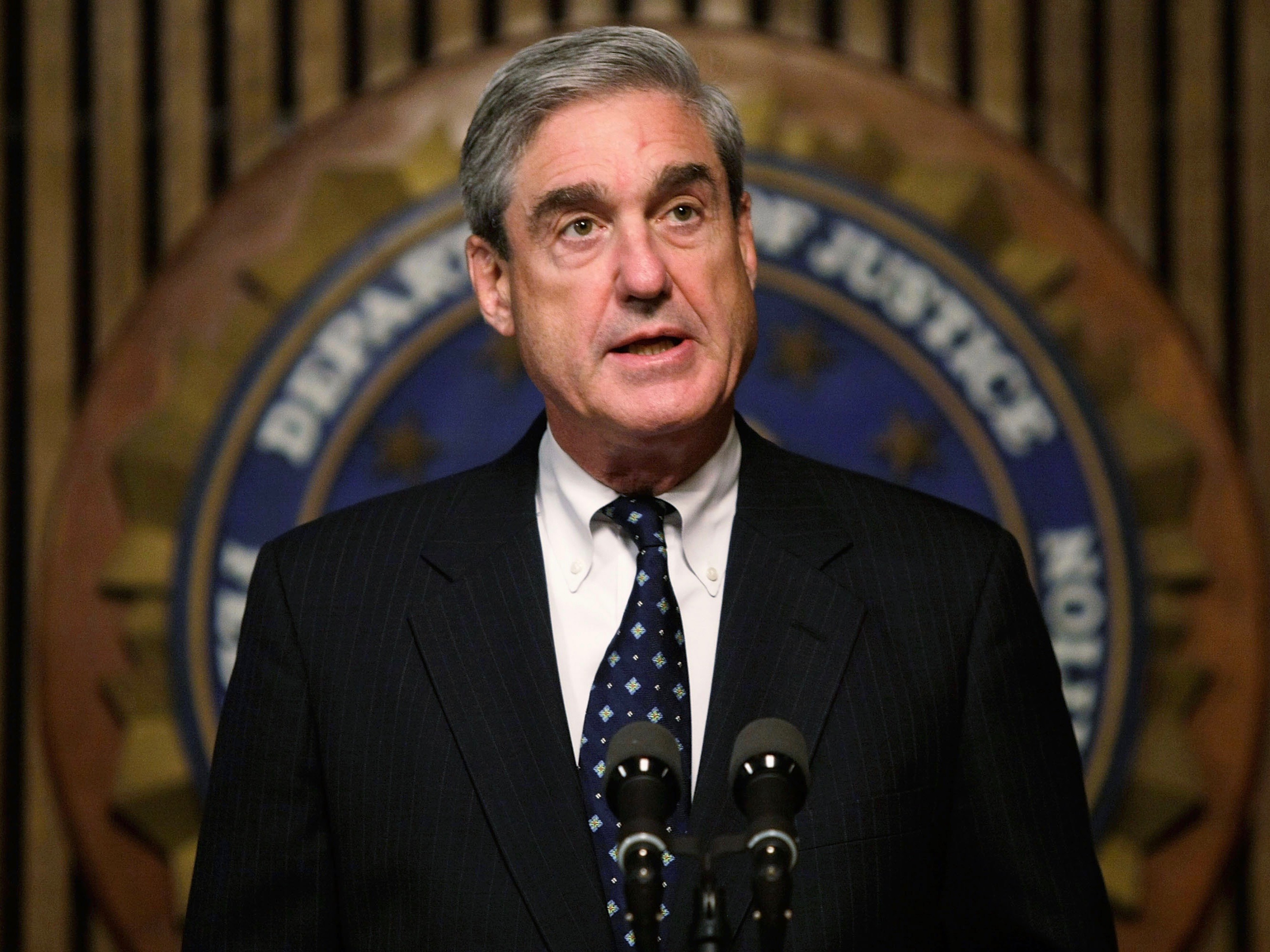 UNDERLYING CRIME NOW PROVEN.  The Justice Department announced the indictment Friday of a notorious Russian troll farm — naming more than a dozen individual suspects who allegedly worked there — as part of the special counsel’s investigation into criminal interference with the 2016 election.

Lawfare: “The indictment is yet another reminder of something that’s been made clear over the past several months repeatedly: Mueller and his team know much more than is public, and they are unusual in Washington in being fully capable of keeping secrets.”

“The special counsel’s office not only appears to be decidedly leak-resistant, everything that has emerged of the investigation so far suggests that the special counsel’s office has information well beyond that which it has made public. This is another reason to avoid making predictions about the innocence of the Trump campaign—or its guilt, for that matter—based on the limited scope of the indictment. Nobody knows how much more to come there is, and anyone pretending to, either by way of claiming vindication for those not yet indicted or by way of asserting confidently what the next shoe to drop will be, deserves a healthy measure of skepticism.”

Mueller has the goods now, and Trump knows it https://t.co/mkb7OFmC72

“A California man pleaded guilty to identity fraud in a second case unsealed Friday by special counsel Robert Mueller in his investigation into Russian interference in the US presidential election,” CNN reports.  “Richard Pinedo’s guilty plea was unsealed by the federal court in DC on Friday, minutes after the Justice Department announced charges against 13 Russian nationals.”

Also, “Special counsel Robert Mueller’s office has told a federal judge it has found evidence that Paul Manafort, the former Trump campaign chairman, committed bank fraud not addressed by the indictment last October in which he was charged with money laundering and failure to register as a foreign agent,” Politico reports.

“As legal wrangling continues over a $10 million bail package for Manafort, prosecutors this week accused him of submitting false information to a bank in connection with one of his mortgages.”

Trump's favorite defense is to claim anything that doesn't address his guilt is proof of his innocence https://t.co/TmQtD0Ze9w pic.twitter.com/HgdaTuq9Rc

TRUMP HAS HELPED PUTIN COVER UP A CRIME.  David Corn: “This means that Mueller’s probe could yield additional information regarding the details and breadth of the Russian campaign to intervene in the election to assist Trump. The president, who has yet to say anything in public showing he is committed to preventing Russian meddling in this year’s election, can continue to dismiss such material as ‘fake news’ produced by a ‘witch hunt.’ (According to the Washington Post, in his first year as president, Trump said the Russia probe was a Democratic hoax 44 times.)”

“Hours after Friday’s indictment, Trump issued a statement once again dismissing the Russia investigation for producing ‘outlandish partisan attacks, wild and false allegations, and far-fetched theories.’  But with this indictment—and possibly others—Mueller has demonstrated that Trump, by refusing to acknowledge fully the Russian assault of 2016, has been helping Putin cover up a crime. “

“White House Chief of Staff John Kelly announced that beginning next week, the White House will no longer allow some employees with interim security clearances access to top-secret information — a move that could threaten the standing of Jared Kushner, President Trump’s son-in-law,” the Washington Post reports.

“Kushner, a senior adviser to the president, has been able to see some of the nation’s most sensitive secrets even as his background investigation has dragged on for more than a year.”

“White House officials have privately discussed concerns that Kushner’s clearance faces obstacles… Among the potential problems: repeated amendments that he had to make to a form detailing his contacts with foreign officials. Two U.S. officials said they do not expect Kushner to receive a permanent security clearance in the near future.”

Vivieca Wright Simpson, the third most senior official at the Department of Veterans Affairs, “is stepping down amid findings she misled ethics officials to secure approval for VA Secretary David Shulkin’s wife to accompany him on taxpayer-funded trip to Europe,” USA Today reports.

Jonathan Swan: “The Department of Commerce will recommend tariffs on steel and aluminum that, if applied, would be the first shots in a global trade war.”

“The fight over whether to use the Section 232 law to impose tariffs has already become the hottest trade fight inside the Trump White House. Gary Cohn, Steven Mnuchin, Rex Tillerson and James Mattis have all been fighting against these tariffs on steel and aluminum — arguing they would harm the global economy and damage relationships with allies.”

A new Greeenberg Quinlin Rosner survey shows that Americans believe Russia meddled in the 2016 election, is concerned about it, and is prepared to support Trump’s impeachment if the investigation produces evidence of illegality.

The survey also shows that, if there is evidence of crimes, members of Congress who attacked the Mueller inquiry could pay a high price in the midterm elections.

The pollsters conclude: “Such evidence of a likely public swing against Trump and the Republican Congress, if clear wrong-doing emerges, helps explain the intense, coordinated attacks they have launched on Mueller and his investigation. These attacks may be having some impact; although a 57-43% majority say they have high confidence in Mueller’s investigation, that margin is relatively narrow.”

“The predictability of deadlock testifies to the power of the intertwined cultural, demographic, and economic divide now separating urban and non-urban America—and how closely the nation’s partisan split follows the contours of that larger separation.”

Politico: “The Senate’s spectacular failure to address the plight of the most sympathetic batch of immigrants in the country illegally — a group that President Donald Trump once declared he had ‘great love’ for — was the latest display of legislative ineptitude in the upper chamber. This account, detailing the demise of the months-long immigration push, is based on interviews with more than a dozen senators and aides who’ve worked on the issue since Trump announced last fall he was rescinding the Obama-era Deferred Action for Childhood Arrivals program.”

“While senators vowed to try again, there’s no apparent reason to think the next time will be any different. Immigration has always been polarizing and difficult to tackle, but Trump’s ascendance has made it that much more so, diminishing trust and depleting the group of dealmaking senators it would take to clear the chamber’s 60-vote threshold.”

James Risen: “One year after Trump took office, it is still unclear whether the president of the United States is an agent of a foreign power. Just step back and think about that for a moment.”

“His 2016 campaign is the subject of an ongoing federal inquiry that could determine whether Trump or people around him worked with Moscow to take control of the U.S. government. Americans must now live with the uncertainty of not knowing whether the president has the best interests of the United States or those of the Russian Federation at heart.”

Martin Longman offers his thoughts on whether Trump committed treason or not.

Eli Lake: “If you’ve been listening just to the Kremlin and the Pentagon, you probably didn’t know that Russia attacked American forces and their allies in Syria last week, suffering heavy casualties.”

“Yes, all sides admit that there was an incident at a U.S. base in Deir Ezzor. And that elements of the Syrian regime and Shiite militias participated in the assault. The Pentagon and Kremlin both acknowledge that Russian “mercenaries” participated, too. But the line for now is that those contractors had gone rogue, and Moscow didn’t know anything about it.”

“But make no mistake: There is overwhelming evidence that those Russian contractors were working at the behest of the Kremlin.”

The New Yorker reports that in 2006, Donald Trump and Karen McDougal, a former Playmate of the Year, “began an affair, which McDougal later memorialized in an eight-page, handwritten document provided to The New Yorker by John Crawford, a friend of McDougal’s. When I showed McDougal the document, she expressed surprise that I had obtained it but confirmed that the handwriting was her own.”

“The interactions that McDougal outlines in the document share striking similarities with the stories of other women who claim to have had sexual relationships with Trump, or who have accused him of propositioning them for sex or sexually harassing them. McDougal describes their affair as entirely consensual.”

“Her account provides a detailed look at how Trump and his allies used clandestine hotel-room meetings, payoffs, and complex legal agreements to keep affairs — sometimes multiple affairs he carried out simultaneously — out of the press.”

"Ultimately, it all comes down to Waukesha County." A cartoon by Paul Noth, from 2016. pic.twitter.com/MrjubqHeUH

“President Trump came to Washington promising to ‘drain the swamp.’ But after less than 13 months, more than 40 percent of the people he originally picked for Cabinet-level jobs have faced ethical or other controversies. And the list has grown quickly in recent weeks,” the Washington Post reports.