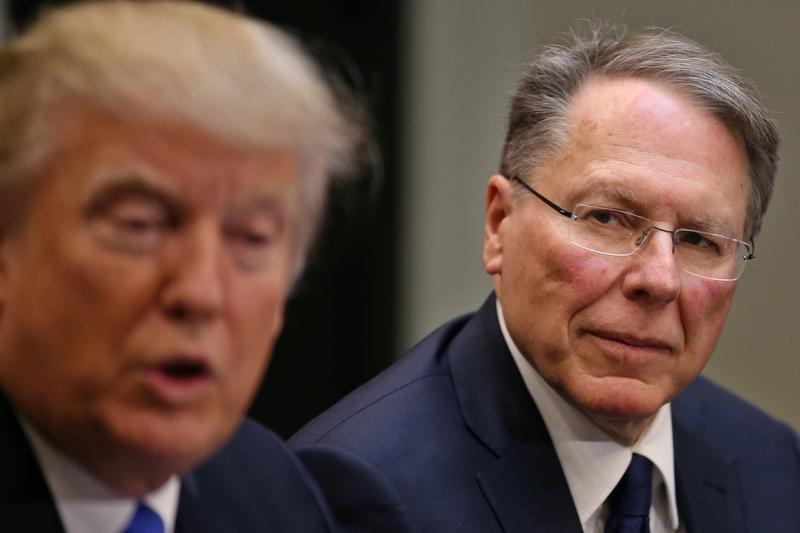 It happened yet again, as it does every week: Another mass shooting, this one at a Parkland, Florida, high school.  Multiple deaths were reported Wednesday as gunfire broke out at Marjory Stoneman Douglas High School in Parkland, Florida, with a suspect in custody.  There are 17 dead.

The suspect, who has been detained, is a 19-year-old former student from the school who reportedly  was previously known to the school for threatening students and who, according to a student, “had guns at home and talked about using them.”

Remember America, Republicans totally support school shootings. They love them.  If they didn’t, they would do something, anything, to make it more difficult for the wrong people to get a gun, or make guns more safe.  But they haven’t.  They love that the mentally ill, terrorists and criminals can buy as many weapons as they want with little to no background checks or obstacles.

Reince Priebus goes into striking on-record detail on incidents @nytmike and I reported on last year involving Sessions resigning and being talked out of it @peterbakernyt https://t.co/2FJmtHCFZw

Former White House chief of staff Reince Priebus confirms to Vanity Fair the media’s portrayal of a White House in disarray and riven by conflict: “Take everything you’ve heard and multiply it by 50.”

Here’s how he describes the aftermath of President Trump’s firing of FBI Director James Comey:

While Priebus and Bannon watched the fiasco explode as the pundits excoriated the Trump White House on every cable news show, Kushner did a slow burn. He was livid, furious that the communications team could not defend Comey’s firing. Bannon blew his stack. “There’s not a fucking thing you can do to sell this!,” he shouted at Kushner. “Nobody can sell this! P. T. Barnum couldn’t sell this! People aren’t stupid! This is a terrible, stupid decision that’s going to have massive implications. It may have shortened Trump’s presidency—and it’s because of you, Jared Kushner!”

The screaming matches and white-knuckle showdowns continued. Eight days later, Priebus got an unexpected visit from the White House counsel—a story he has not told publicly before. “Don McGahn came in my office pretty hot, red, out of breath, and said, ‘We’ve got a problem.’ I responded, ‘What?’ And he said, ‘Well, we just got a special counsel, and [Attorney General Jeff] Sessions just resigned.’ I said, ‘What!? What the hell are you talking about?’ ”

The piece is an adaptation from the forthcoming paperback edition of The Gatekeepers by Chris Whipple.

Rep. Adam Schiff (D-CA) said that the House intelligence committee had seen an “abundance” of evidence of collusion with Russia and obstruction by Donald Trump’s campaign and administration that is not yet public, the Guardian reports.

Said Schiff: “It is a tried and true maxim. As a former prosecutor, you follow the money. We have not been able to adequately follow the money. And I think the allegations on money laundering are credible enough that we ought to, in the exercise of due diligence, see if this was one of the other vectors of the Russian active measures campaign.”

He added: “We know that in other places they use money laundering as a way of entangling people, as a way of compromising people. To me that is far more potentially compromising than any salacious video would be.”

Unlike the past 50 years, Washington is pursuing its interests in the Middle East from the edges, rather than the center of the action. @natsecHeather writes https://t.co/P2BkmO0by9

Vice President Mike Pence told Axios that U.S. intelligence has determined that Russian meddling in the 2016 election did not affect the outcome.

Said Pence: “Irrespective of efforts that were made in 2016 by foreign powers, it is the universal conclusion of our intelligence communities that none of those efforts had any impact on the outcome of the 2016 election.”

Jonathan Chait: “This is unequivocally false… If you think about this question, it’s completely obvious that they couldn’t rule in or out the possibility that Russia changed the election outcome. It’s not just impossible for an intelligence agency to determine this. It’s impossible for anybody to determine it.”

Gov. John Kasich’s (R) “brand is built around the idea of ‘two paths’ for the Republican Party: one for center-right pragmatists like him, the other for flamethrowers like Donald Trump,” BuzzFeed News reports.

“But as the Ohio governor considers a rematch with Trump in 2020, he is weighing two more-tactical paths. Does he challenge Trump, the sitting president, in primaries where Kasich won’t find much institutional GOP support? Or does he leave the party, go down a route littered with ballot-access hurdles and fundraising challenges, and run as an independent?”

“Sources close to Kasich’s political team have told BuzzFeed News in recent weeks that both options are in play.”

This sounds like a great plan to reelect Trump.

Here are the members of Congress who take the most money from the gun lobby https://t.co/FW5Z4Da5me #Parkland #GunControlNow

The @GOP has a HUGE PROBLEM and BLOOD on their HANDS! pic.twitter.com/m628ZgJN5u

EPA Administrator Scott Pruitt “has broken months of silence about his frequent premium-class flights at taxpayer expense, saying he needs to fly first class because of unpleasant interactions with other travelers,” the AP reports.

Said Pruitt: “We live in a very toxic environment politically, particularly around issues of the environment. We’ve reached the point where there’s not much civility in the marketplace and it’s created, you know, it’s created some issues and the (security) detail, the level of protection is determined by the level of threat.

Ex-FEC chairwoman Ann Ravel asks a good Q on Stormy Daniels: "How did Michael Cohen know about the relationship if not from either the candidate himself or the campaign?” https://t.co/2YeajtDNgC

When Sen. Angus King (I-ME) asked CIA Director Mike Pompeo if President Trump had asked him specifically “to try and stop the Russian meddling in the midterm elections, Pompeo dodged, feigning an inability to understand the question,” Defense One reports. Said Pompeo: “I’m not sure how specific.”

Adm. Michael Rogers, the outgoing head of U.S. Cyber Command and the NSA, agreed: “I can’t say that I’ve been specifically directed.”

Budget Director Mick Mulvaney revealed on Wednesday that a military parade requested by President Donald Trump could cost as much as $30 million — enough to fund food stamps for over 20,000 people each year.  Watch Barbara Lee destroy him.

George David Banks, a senior official on the National Economic Council, “resigned after being informed that he would not receive a permanent security clearance, as the White House faces increasing scrutiny over the number of high-ranking officials allowed to work on interim clearances,” Politico reports.

Banks “was informed by the White House counsel’s office Tuesday that his application for a permanent clearance would not be granted over his past marijuana use.”

A new Public Policy Polling survey finds Democrats have a solid 49% to 41% lead on the generic congressional ballot, although that’s down a shade from December when it was 51% to 40%.

Beyond their overall lead, they’re also benefiting from an enthusiasm advantage: 65% of Hillary Clinton voters say they’re “very excited” to vote in the election this fall, compared to 58% of Donald Trump voters.

Gallup: “Congressional approval is now 15%, down slightly from an uptick to 20% last month after Congress passed tax reform in December. Positivity quickly faded this month as the government shut down twice in three weeks because of impasses over the federal budget.”

Sen. Elizabeth Warren (D-MA) “made a surprise appearance at the National Congress of American Indians Wednesday morning, forcefully responding to President Trump’s derisively calling her ‘Pocahontas’ and addressing her claims of Native American heritage more directly — and far more expansively — than she ever has before,” the Boston Globe reports.

“She did not apologize for her claims that her mother’s family had Cherokee blood… But she also planned to tell the gathered tribal leaders from around the country that she understood the distinction of being a member of a tribe, and that while it was part of her heritage, she was not a tribal member.

Spurs coach Gregg Popovich on why it's important for the NBA to promote Black History Month: "We live in a racist country… And it's always important to bring attention to it, even if it angers some people." pic.twitter.com/RCCs7rSJix

“The more frantically the White House tries to extricate itself from the Rob Porter scandal, the deeper it digs into a political hole,” CNN reports.

“Eight days in, it’s beginning to look like the storm set off by the surfacing of allegations by two ex-wives of the former presidential aide will never abate, absent a decisive intervention by President Trump in moment of accountability and self-criticism that seems alien to this White House.”

Multiple sources told CNN that Trump has not yet decided whether to replace chief of staff John Kelly “but that conversations about who could succeed him have heated up.”

“In a year when the party is deploying all their other big guns and trying to appeal to precisely the kind of voters Clinton has consistently won over, an array of Democrats told Politico they’re keeping him on the bench. They don’t want to be seen anywhere near a man with a history of harassment allegations, as guilty as their party loyalty to him makes them feel about it.”

“After booting Sen. Al Franken precisely because they wanted to draw a clear contrast with Trump, Democrats across the party’s ideological and geographical spectrum acknowledged the political trouble that any appearance with Clinton would cause.”

President Trump “is refusing to budge from his immigration framework, and he and his allies on Capitol Hill are laying the groundwork to heap the blame on Democrats if the Senate fails to reach a deal this week,” Politico reports.

“In Trump’s view, according to administration officials and GOP senators, he’s already compromised beyond where he and his staff felt comfortable by offering 1.8 million young undocumented immigrants a pathway to citizenship. And if Democrats want to step up this week and sink the president’s proposal, that will be on them.”

Playbook: “At this point, it does not look like the Senate is going to approve any immigration bill. If it doesn’t the focus will turn to the House. House Majority Whip Steve Scalise (R-LA) told his whips last night that they will canvas support for Rep. Bob Goodlatte’s (R-VA) immigration bill — legislation that doesn’t stand a chance of passing the Senate. But the House will clear that, and Democrats will try to force Speaker Paul Ryan to put centrist legislation on the floor. If anything were to happen, the best bet at this point would be a one-for-one trade: DACA protections for beefed up border security. It’s completely feasible, though, that nothing happens at all, or until the summer after further court action.”

James Hohmann: “Anti-immigration hard-liners are staking out a firm position because most of them are not actually concerned about the plight of the dreamers. They have never thought these young people, whose undocumented parents brought them to the United States as children, should be here anyway. They agitated for Trump to end the program.”

“This means they’ll be fine if no bill passes, and they know that gives them way more leverage to demand wholesale changes to the entire legal immigration system.”

As Sen. Tom Cotton (R-AR) told Fox & Friends: “The president’s framework bill is not an opening bid for negotiations. It’s a best and final offer.”