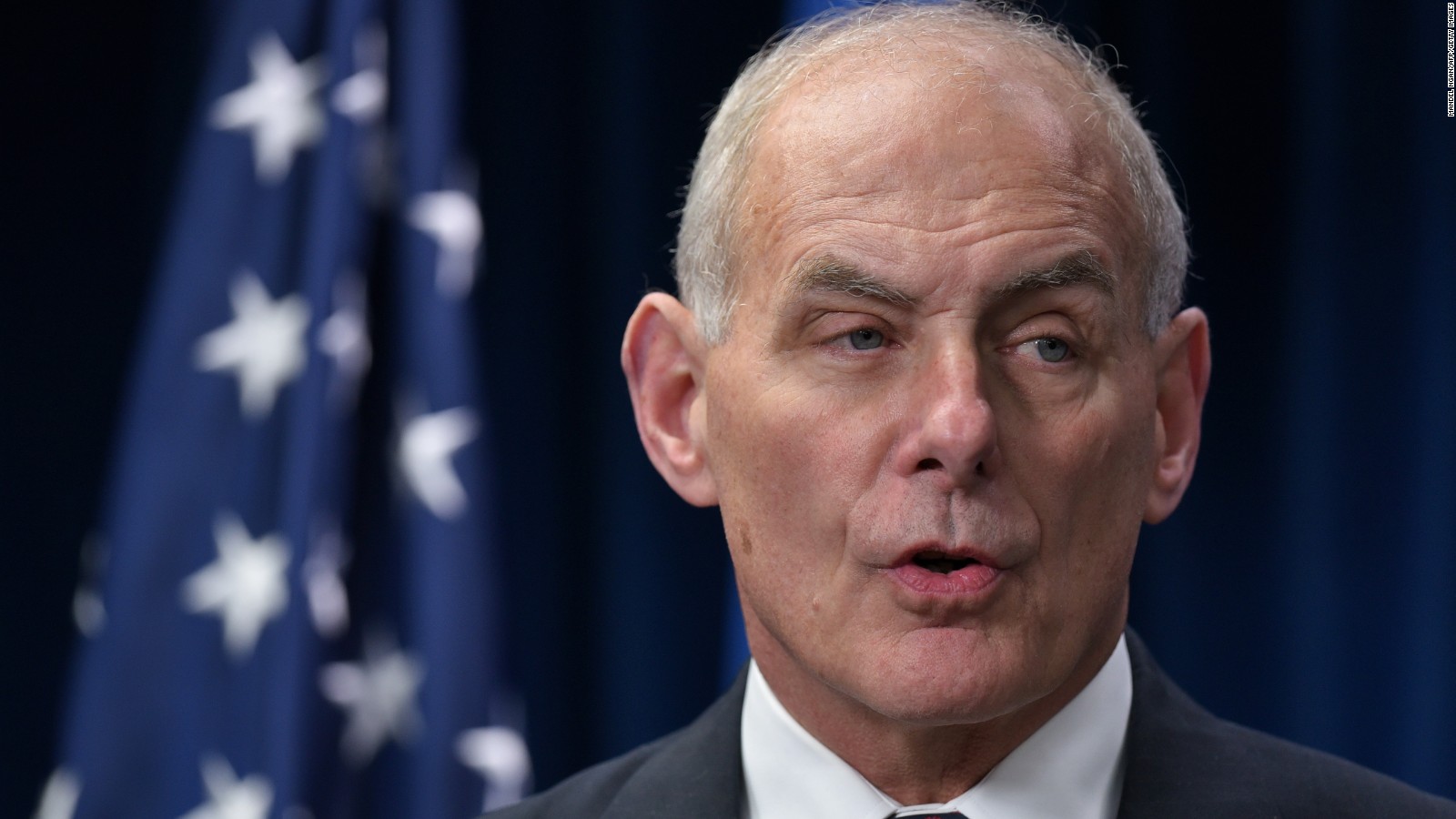 “Mr. Wray said that the bureau delivered to the White House a partial report on problems in Mr. Porter’s background in March, months earlier than the White House has admitted receiving the information.”

White House Chief of Staff John Kelly’s enemies are ready to use FBI Director Chris Wray’s testimony as a weapon, according to Jonathan Swan. Said one White House official: “Wray’s FBI timeline makes one thing clear: the Kelly coverup is unraveling right before our eyes.”

Politico: “While the president often makes a hash of the truth, aides took Kelly’s word at face value until they were confronted with zigzagging accounts of the events leading up to former staff secretary Rob Porter’s resignation—and Kelly’s role in them.”

“In the hours immediately after the Daily Mail published a photograph of Porter’s first ex-wife with a black eye, White House press secretary Sarah Sanders hastily arranged an off-the-record meeting in the West Wing with Porter and four reporters: the New York Times’ Maggie Haberman, the Washington Post’s Josh Dawsey, Axios’ Jonathan Swan, and the Wall Street Journal’s Michael Bender. In that meeting, which hasn’t previously been reported, Porter relayed his version of events and fielded questions from the group.”

“The White House declined to comment on Porter’s meeting with reporters, including whether or not Kelly was aware it took place. But two White House officials said the mixed messages are symptomatic of the extent to which the White House has left Kelly to shoulder the blame for the Porter mess.”

Meanwhile, CNN reports that “Rob Porter was involved in serious discussions to be promoted when he abruptly resigned from the White House last week amid allegations that he abused his two ex-wives.”

“Porter had been actively lobbying to take on new policy portfolios outside the traditional scope of the staff secretary, one person familiar with the matter said, which included speechwriting duties and a role in planning policy rollouts. Neither of those tasks is traditionally carried out by the staff secretary.”

Phillip Bump: “Trump mocked Clinton for going 235 days without giving a news conference. As of Friday, it will have been 365 days — a year — since he has given one as president.”

As an immigration debate starts in the U.S. Senate, Roll Call notes that Slovenian-born Melania Trump’s own immigration history “has never been fully explained by the Trump camp. ”President Trump and his aides have “never thoroughly addressed the curious case of then-Melanija Knavs, who at 26 moved to New York City in the mid-1990s to pursue a professional modeling career. It would be two years before she met and began dating businessman Donald Trump. And still unresolved is whether she and her modeling agency properly handled her immigration status during that window.”

Ratings of U.S. leadership fell in nearly every part of the world in the first year of Donald Trump’s presidency, dragging median approval to a record-low 30%, according to Gallup.

“The Israeli police recommended on Tuesday that Prime Minister Benjamin Netanyahu be charged with bribery, fraud and breach of trust, casting a pall over the future of a tenacious leader who has become almost synonymous with his country,” the New York Times reports.

“The announcement instantly raised doubts about his ability to stay in office.”  The BBC has a good backgrounder on the scandal.

Pennsylvania Gov. Tom Wolf (R) “is rejecting a Republican-drawn map of Pennsylvania’s congressional districts to replace the GOP-drawn map struck down in a gerrymandering case, leaving him to make a different recommendation to the state’s high court,” the AP reports.

Sean Hannity Gets Caught in a Lie That Even He Can’t Spin https://t.co/MoJfNhNLvC

Bloomberg: “Kagan and Roberts are part of a quartet of relatively centrist justices, along with Anthony Kennedy and Stephen Breyer, who at times can turn their chemistry into a consensus and avert a sharp divide.”

“The group will be tested during what could be a divisive stretch starting next week, when the court reconvenes after a month-long recess. Between now and the end of June, the court will rule on partisan gerrymandering, voter-database purges, mandatory union fees, Trump’s travel ban and possibly his effort to rescind a deferred-deportation program.”

“The four justices are hardly ideological soulmates… But as a group they stand in contrast to their five less compromising colleagues — Ruth Bader Ginsburg and Sonia Sotomayor on the left and Clarence Thomas, Samuel Alito and Neil Gorsuch on the right.”

“Mr. Hunter is now one of five former federal prosecutors who are running for House seats as Democrats this year, compared with zero in 2016. The Wall Street Journal couldn’t identify any similar Republican candidates.”

Forbes has assembled a list of who is currently paying rent to President Trump.

The Trump Organization has ongoing deals with law firms that lobby the federal government, banks controlled by foreign states and big media companies that cover Trump. Taken together – more than 150 tenants and some $175 million a year – they represent the greatest opportunity for conflicts of interest in a presidency full of them.

The FBI does background checks, but the White House can do whatever it wants with those, and is under no obligation to follow the FBI's recommendation https://t.co/nhMBAktX8j

“U.S. forces killed scores of Russian contract soldiers in Syria last week in what may be the deadliest clash between citizens of the former foes since the Cold War,” Bloomberg reports.

“More than 200 mercenaries, mostly Russians fighting on behalf of Syrian leader Bashar al-Assad, died in a failed attack on a base and refinery held by U.S. and U.S.-backed forces in the oil-rich Deir Ezzor region, two of the Russians said. The U.S. official put the death toll at about 100, with 200 to 300 injured.”

Politico: “Senators on Monday kicked off an open-ended immigration debate that promises to test their rusty skills at bipartisan legislating, with no guarantee of success. The Senate voted 97-1 to proceed to a legislative shell bill that’s designed to serve as a vehicle for votes on competing immigration proposals, with Ted Cruz (R-TX) the sole ‘no’ vote.”

“All eyes are now on which — if any — idea can clear a 60-vote hurdle that requires both parties to look across the aisle. But as debate began, Republicans and Democrats alike acknowledged that it’s anyone’s guess as to whether such an immigration plan exists. President Donald Trump’s immigration framework is on track for a Senate floor vote and got endorsed Monday by Majority Leader Mitch McConnell (R-KY), but it’s unlikely to win 60 votes without significant changes.”

The old GOP "starve the beast" strategy is back, as Trump and Republicans gear up to push deep cuts to social programs, argues @paulwaldman1:https://t.co/OhDLmo7t3k

A Vox analysis of hiring records for seasonal workers at three Trump properties in New York and Florida revealed that only one out of 144 jobs went to a US worker from 2016 to the end of 2017.

Foreign guest workers with H-2B visas got the rest.

Said Coats: “We assess that the Russian intelligence services will continue their efforts to disseminate false information via Russian state-controlled media and covert online personas about U.S. activities to encourage anti-U.S. political views.”

Just days after President Trump signed a $300 billion budget hike, Coats also warned that the national debt is “unsustainable” and a “dire threat” to national security.

New York Times: “In a year of controlling power in Washington, President Trump and Republicans in Congress have run up federal spending, approved deficit-swelling tax cuts and presided over a marked increase in ‘policy uncertainty’ in the economy. They still talk about the importance of fiscal discipline, but they have yet to enforce it.”

“The $4.4 trillion budget Mr. Trump released on Monday spends as much over 10 years as any budget offered by President Obama, whose policies Republicans blamed for ballooning the size of the federal government and hobbling the economy. It does not attempt to achieve balance at the end of that time, despite optimistic economic growth projections that far exceed what most economists say is possible.”

“Instead, it projects that deficits will grow $7 trillion over the next decade as the United States continues borrowing huge sums of money — a number that could double if the administration turns out to be overestimating economic growth and if the $3 trillion in spending cuts the White House has floated do not materialize in Congress.”