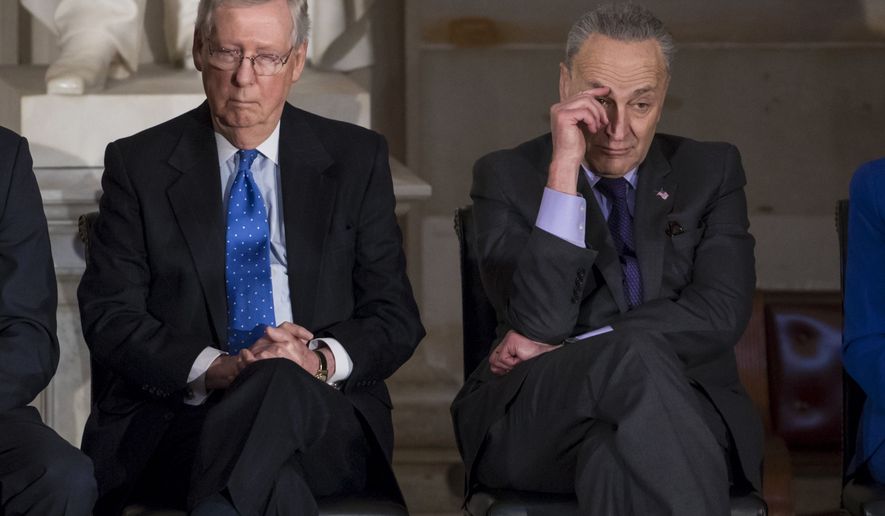 “Heading into an open-ended immigration debate, some of the Senate’s most conservative members are offering a package heavy with border security and provisions aimed at quickly deporting unauthorized migrants,” the Wall Street Journal reports.  “The plan also includes cuts to family-based immigration and the elimination of the diversity lottery that would ultimately reduce total legal immigration to the U.S. by about a third, as well as a path to citizenship for young undocumented people brought to the U.S. as children.”

CNN: “The proposal is expected to be one of several amendments the Senate will consider this week as it debates immigration. Senate Majority Leader Mitch McConnell has used a bill unrelated to immigration as the starting point for the debate, which will allow senators to offer proposals that can compete for 60 votes to advance.”

“White House officials have begun floating a possible compromise idea — a pledge to maintain legal immigration at current levels, about 1.1 million people a year, for more than a decade,” the Los Angeles Times reports.  “The shift shows the White House is feeling out the contours of a possible compromise as lawmakers prepare for marathon immigration debates on the Senate floor next week over how to protect from deportation — and possibly provide legal status for — the estimated 1.8 million people brought to the country illegally as children.”

Jonathan Swan: “It’s been five days since domestic violence allegations toward Rob Porter surfaced. Within 24 hours, Porter was out of a job. The scandal has rocked the White House and one of its most astonishing components is that Chief of Staff John Kelly and the White House press shop are still providing conflicting stories about what happened.”  “This is crazy. Even in a White House that’s famous for chaos, I’ve never seen anything like this.”

More Jonathan Swan: “Behind closed doors: The president has told multiple people that he believes the accusations about Porter, and finds him ‘sick.’”  “Four sources who have spoken directly with Trump tell me his private comments about ex-aide Porter — whose two ex-wives accused of violent attacks — have been brutal.” “But his public comments don’t reflect that, at all. This is the strongest indicator yet that Trump will reflexively defend his male allies from any and all accusations, even when he thinks those accusations are true.”

“In light of the President’s and the White House’s continued dismissal of me and Colbie, I want to assure you my truth has not been diminished. I own my story and now that I have been compelled to share it, I’m not willing to cover it up for anyone. And for any men, women, or children currently in situations of abuse, please know: It is real. You are not crazy. You are not alone. I believe you.” — Jennie Willoughby, ex-wife of former White House staff secretary Rob Porter, writing in Time about President Trump’s skepticism that she was a victim of domestic abuse.

I thought the Hunger Games franchise was done? pic.twitter.com/vYT6fP32hF

White House budget chief Mick Mulvaney told CBS News that the two-year budget bill — passed by Congress and signed into law by President Trump — is a “very dangerous idea” and explodes the deficit.  He added he would “probably not” have voted for it as a congressman.

“Republicans started the election cycle with designs on expanding their Senate majority, but the GOP’s candidates are far behind Democrats in fundraising going into 2018,” Politico reports.  “The numbers are stark: No Republican running for a Democratic-held seat raised more than $1 million from contributors in the fourth quarter of last year, but two Democrats running for seats held by Republicans did. By contrast, of the 10 vulnerable Democrats up for reelection this year in states President Donald Trump carried in 2016, all but West Virginia’s Joe Manchin raised more than $1 million.”

Gillibrand on Trump: "I think he should resign, and if he's unwilling to do that, which is what I assume, then Congress should hold him accountable. We are obligated to have hearings." https://t.co/Dzy9H2YHai

A Catholic high school in Greenwich, CT told Sophomore Kate Murray that “if she does not remove a Planned Parenthood sticker from her laptop, she cannot attend the school next year,” the Greenwich Time reports.  “Murray was told by the private Catholic school’s administrators Tuesday she has a choice: If she keeps the sticker, she can leave the school now or leave at the end of the academic year, her parents said. If she removes the sticker, she can continue to attend the school.”

“The sticker states ‘I stand with Planned Parenthood’ and is one of many on Kate’s laptop.” In response, more than 2,500 people have signed a petition saying  “I Stand with Kate Murray.”

House Intelligence Committee Chairman Devin Nunes (R-CA) “has found a way around the often unflattering coverage of his role in the Trump-Russia investigation — by operating his own partisan news outlet,” Politicoreports.

Resembling a local, conservative news site, The California Republican is classified on Facebook as a “media/news company” and claims to deliver “the best of US, California, and Central Valley news, sports, and analysis.”

Sen. Kirsten Gillibrand (D-NY) slammed President Trump for his tweet questioning a lack of “due process” in abuse claims, saying that Congress could hold hearings about sexual misconduct allegations against him if he wanted due process, The Hill reports.

Said Gillibrand: “If he wants due process for the over dozen sexual assault allegations against him, let’s have Congressional hearings tomorrow. I would support that and my colleagues should too.”

“President Trump is expected to renew his call for drastic reductions to nondefense programs in rolling out his budget request Monday, even with hundreds of billions in new cash at hand,” Politico reports.

“While Congress busted strict spending caps last week — allowing for an extra $300 billion to be spent over the next two years — the Trump administration is still urging severe austerity for some arms of the federal government. Trump’s budget will lay out ‘an aggressive set of spending reforms’ to reduce the deficit by $3 trillion over a decade, according to a preview released by the White House on Sunday.”

Playbook: “The White House’s budget is especially irrelevant this year. In most years it’s treated with an eye roll. But this year, the president just signed a two-year spending framework into law.”

Politico: “No one knows the GOP leader’s endgame, nor how he personally prefers the stalemate over Dreamers be resolved. It’s highly unusual for a Senate majority leader, particularly one as calculating as McConnell, to bring a divisive issue to the floor with no clearly intended result in sight. Even his top lieutenants aren’t sure whether McConnell would ultimately support a final immigration deal that can clinch the 60 votes needed to clear the Senate.”

Mike Allen: “President Trump today will unveil a $1.5 trillion infrastructure plan that his own aides don’t think will pass, and a $4 trillion budget that reads like ‘science fiction.’ It’s the strangest of year-ahead plans for a party that controls the White House and both chambers of Congress: Top Republicans see Job 1 for this year as promoting the tax cut they passed last year.”

“A source close to the White House tells me that with an eye to getting Republicans excited about voting for Republicans in midterms, the president this year will be looking for ‘unexpected cultural flashpoints’ — like the NFL and kneeling — that he can latch onto in person and on Twitter.”

The source said Trump “is going to be looking for opportunities to stir up the base, more than focusing on any particular legislation or issue.”

Fiscal irresponsibility at a time of near full employment has begun to rock the markets @Morning_Joe pic.twitter.com/EZf6yA09Fv

“President Trump, who has pushed out a string of senior aides since taking office, is upset with Chief of Staff John F. Kelly and would like to replace him, but Republican congressional leaders and strategists are strongly counseling him against feeding the perception of an inner circle in nonstop disarray,” the Los Angeles Timesreports.

“President Trump on Monday will propose offering $100 billion in federal incentives to encourage cities and states to invest in road, bridge and other building projects, the centerpiece of a plan to spur $1.5 trillion in infrastructure spending over the next decade without devoting significant federal money,” the New York Times reports.

“The proposal, to be unveiled the same day as Mr. Trump’s 2019 budget, faces long odds on Capitol Hill, where members of both parties — particularly Democrats — are skeptical of any plan that fails to create a dedicated new funding stream to address the nation’s crumbling infrastructure. Lawmakers are also doubtful that such a small federal investment will be sufficient to spur an infrastructure spending boom.”

Trump promised he would donate his presidential salary. But in two cases, the government programs he donated to help don’t seem to exist, WaPo reports — at least, not yet. https://t.co/PrRldhT59u