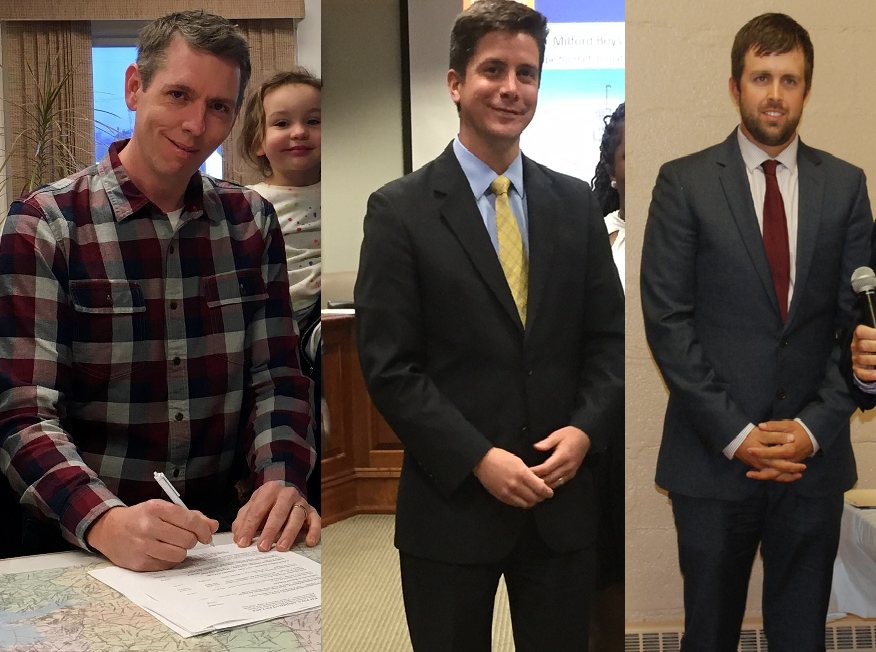 For the first time since 2010, Republican Rep. Harvey Kenton garnered a Democratic opponent in carpenter Don Allan, Jr., who was encouraged to run for office through one of the groups leading the Democratic Blue Wave in 2018, Run For Something.   And just like that, Mr. Kenton announced his retirement.  Given that his last contested election against Russ McCabe in 2010 was a close contest, and given that Democratic enthusiasm would out pace Republican enthusiasm this year, Kenton was not up for the race.   I don’t blame him.

“I will be 77 years old by the time election day rolls around,” he said in a statement. “After discussing it with my wife and colleagues, I’ve decided that it is time for me to pursue other interests.”  The chosen Republican successor is 33-year old Milford Mayor Bryan Shupe.  He has been Mayor since 2014.  Shupe started the online media outlet Milford Live and together with his wife own a doggy daycare business.

Allan noted the generational change with Shupe getting in the race to the News Journal. “I guess we’re going to have our first face-off among millennials for this seat,” Allan said. “I think what I offer voters is a chance to be represented by a blue-collar worker. I’m not a political science major, an attorney or an accountant. I go to work and get my hands dirty every day.”   That’s a great pitch.

As shown above, the 36th RD consists of northeastern Sussex, from Milford down to Georgetown over to Milton and the coast.  Demographically, Democrats hold the registration edge, but this a Republican district, or at least, has been since 1984.  Here are the details from First Map:

Meanwhile, now that State Representative Dave Wilson is seeking a promotion to the Senate, his 35th RD seat is now open, and Sussex County Farm Bureau President Jesse Vanderwende, a Republican, is seeking it.   Vanderwende is a farmer on his family farm, as seen below:

“Agriculture is Delaware’s top industry, and I want to be a part of boosting Delaware’s economy by not only focusing on ag, but all areas important to the 35th,” Mr. Vanderwende said in a statement. “Jobs, the education system, infrastructure and public safety just to name a few. One of the reasons I decided to run is to be a voice in Dover that reflects the conservative values of the constituents in the 35th District.”

The 35th RD covers northwest Sussex, from the county line down to Georgetown and Seaford, including the towns of Greenwood and Bridgeville.  It is one of the few districts where Republican voters actually outnumber Democrats, as shown in the demographics provided by First Map below:

There is no word yet on who the Democratic candidate(s) will be in the 35th.