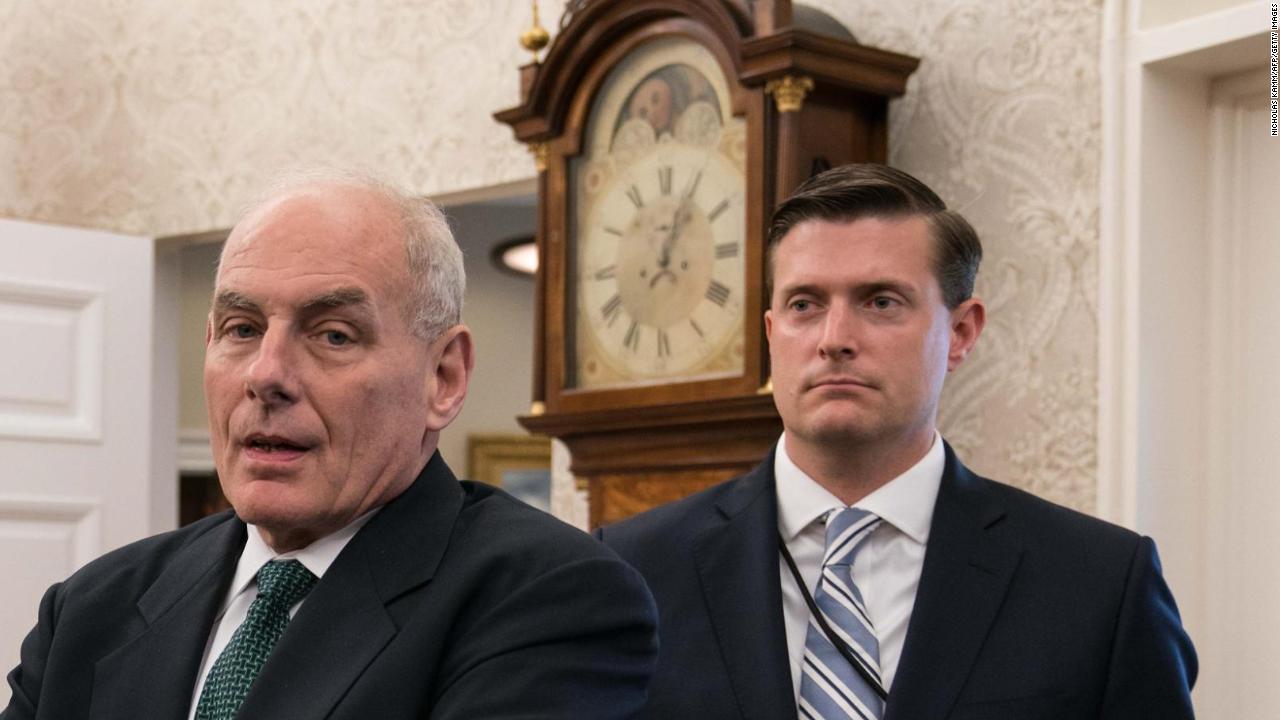 “Allegations of domestic abuse levied against top White House staffer Rob Porter by his ex-wives were known among senior aides to President Donald Trump for months, even as his stock in the West Wing continued to rise,” CNN reports.  “A scramble ensued inside the West Wing to defend him when the claims became public this week, the sources said. That effort continues even after his resignation.”

“A day after White House Staff Secretary Rob Porter resigned amid allegations he physically abused his ex-wives, the Trump administration is still struggling to contain the fallout. The question of who knew what, and when, is being hotly debated in the West Wing. Chief of Staff John Kelly, whose relationship with Trump has been strained in recent weeks, is taking the lion’s share of the blame.”

“The crisis also raises questions about Hope Hicks’s decision-making, and whether her romantic relationship with Porter clouded her judgment.”

Jonathan Swan: “The West Wing couldn’t have handled it worse, including over-the-top statements of support for Porter before all the facts had come out. The big question: Who in the West Wing knew about Porter’s past, uncovered months ago by the FBI while investigating Porter for a security clearance?”

The Dow Jones Industrial Average plunged more than 1,000 points during trading Thursday, the latest major swing in a volatile week for the market.

Politico: “The Senate will go first and is expected to pass the bill with relative ease. One wrinkle emerged Thursday afternoon with Sen. Rand Paul blocking speedy consideration of the measure until he gets a vote on an amendment to keep Congress under strict budget caps. Still, Senate GOP leaders believe they can work things out with Paul.”

“But the plan could unravel in the House, where conservative opposition is forcing Republican leaders to lean on Democrats for votes as House Minority Leader Nancy Pelosi digs in with immigration demands.”

Washington Post: “Ryan suggested in a radio interview Thursday that he would be able to deliver a majority of Republicans — about 120 votes — meaning about half of the 193 Democrats might be necessary to pass the deal. That could be a tough sell among House Democrats, who are livid that their demands for protections for ‘dreamers’ — immigrants brought to the United States as children now living in the country illegally — were not made part of the deal.”

USA Today: “With the clock ticking toward a midnight funding deadline, Senate leaders said they could not provide any update about the timing for a vote.”

Playbook: “When Paul Ryan was about to take the speakership from John Boehner, he railed against a package just like this. He took some heat yesterday in a closed Republican meeting from lawmakers who felt cut out by the process by which this bill was put together. He’s now putting this bill on the floor, and urging Republicans to vote yes. There’s a lot of chatter that a man seeking another term as speaker would never put this bill on the floor. At the moment, it’s just that — chatter. Ryan has said he’ll decide on his re-election in the spring after a conversation with his wife.”

“I was haunted by tweets every single day. Like, what is he going to tweet next?” — Omarosa Manigault, on Celebrity Big Brother, about life in the Trump White House.

Sen. Rand Paul (R-KY) “said he will vote against Marvin Goodfriend’s bid to become a member of the Federal Reserve board, a move that could sink the nomination on the Senate floor,” Politico reports. “Goodfriend, nominated by President Trump, was approved by the Senate Banking Committee in a 13-12 party-line vote, indicating that he is unlikely to receive any Democratic support. With Sen. John McCain (R-AZ) out for health reasons, any Republican ‘no’ vote could defeat his nomination.”

Stan Collender: “The House Freedom Caucus, the ultra-conservative group of 30-40 Republicans that pushed former Speaker John Boehner (R-OH) to resign and has often been the bane of current Speaker Paul Ryan’s existence because of its take-no-prisoners attitude, may be completely neutered by the budget deal announced in the Senate yesterday.”

“Indeed, all of HFC’s major reasons for existing at all could be eliminated if the deal is approved.”

“In a sign of increasing partisan hostilities, Republicans on the House Intelligence Committee plan to construct a wall – a physical partition – separating Republican and Democratic staff members in the committee’s secure spaces,” CBS News reports.

“For now, some Republican committee members deny knowing anything about it, while strongly suggesting the division is the brainchild of the committee’s chairman, Devin Nunes (R-CA).”

House Democrats are stepping on the gas, with plans to target 101 Republican-held congressional districts in the midterm elections, NBC News reports.

“The DCCC’s own polling of key districts has been more promising than national trends, showing President Donald Trump underwater not just in the 23 GOP-held districts Clinton won, but also in the more than 60 districts Trump won, and the 11 where retirements have left the seat open.”

“Democrats are now fielding candidates in all but 12 of the 238 districts held by Republicans… The idea is to expand the map as much as possible and hope to ride the potential wave.”

Though Republicans have closed the gap in the generic congressional ballot, the Cook Political Report notes that “most new district-by-district fundraising and polling numbers are downright terrible for Republicans, even in seats previously thought to be safe.”

“This week, we’re shifting our ratings in 21 races towards Democrats. If anything, that still understates Democrats’ potential in individual races. If Democrats win the national House vote by six points (as today’s polls indicate), House control would be a coin flip. But according to our new ratings, if each party were to win an even number of Toss Up races, Democrats would only win 13 or 14 seats — ten shy of the 24 they need.”

Mike Pence is having a full-blown meltdown over being called out for his homophobia https://t.co/TaouzKR44l pic.twitter.com/vTubO2ezDt

Washington Post: “Republican lawmakers in 2011 brought the U.S. government to the brink of default, refused to raise the debt ceiling, demanded huge spending cuts, and insisted on a constitutional amendment to balance the budget.”

“On Wednesday, they formally broke free from those fiscal principles and announced a plan that would add $500 billion in new spending over two years and suspend the debt ceiling until 2019. This came several months after Republicans passed a tax law that would add more than $1 trillion to the debt over a decade.”

“With all these changes, the annual gap between spending and revenue in 2019 is projected to eclipse $1.1 trillion, up from $439 billion in 2015. And they are expanding the deficit at an unusual time, when the economy is growing and unemployment is low, a dynamic that often leads to shrinking budget gaps.”

A new NBC News/Survey Monkey poll finds a majority of Americans — 55% — are not confident that the federal government is doing enough to prevent foreign interference in our elections. Additionally, 57% of Americans think it’s likely that Russia will try to influence this year’s midterms.

Matt Latimer: “At the same time, the president is overtly tying his administration to the most popular institution in our nation—perhaps the only popular institution left—the United States military. More to the point, he’s daring the Democrats, and their allies in the media, to stand apart and oppose it. By doing so, Democratic leaders appear either as killjoys complaining about excessive costs (as if frugality were a Democratic Party hallmark) or as diminishing the achievements of the military or the need to publicly extol them. All in all, it’s a pretty clever trap.”

A military parade is third world bullshit. We prepare. We deter. We fight. Stop this conversation.

O’Neill is the Navy Seal who killed Bin Laden.

“I think confidence is silent and insecurity is loud. America is the most powerful country in all of human history, everybody knows it, and we don’t need to show it off.” — Sen. John Kennedy (R-LA), quoted by Politico, disagreeing with President Trump’s idea of a military parade in Washington, D.C.

“The criminal investigation into Rep. Duncan Hunter (R-CA) is intensifying as a grand jury in San Diego questions multiple former aides about whether the California Republican improperly diverted political funds for personal use,” Politico reports.

“Federal prosecutors have subpoenaed Hunter’s parents, as well as a female lobbyist with whom many people close to the congressman believe he had a romantic relationship.”

“The Justice Department is trying to determine whether hundreds of thousands of dollars from Hunter’s campaign account were spent improperly on his family and friends. Hunter already sold his home to pay back what even he now acknowledges were improper charges, moving his wife and kids in with his parents while he mostly lives in his Capitol Hill office.”

You can measure how badly the White House is handling the Rob Porter abuse case by watching the incensed reaction of Amanda Carpenter, a former staffer to Sens. Jim DeMint (R-SC) and Ted Cruz (R-TX).

Jonathan Chait: “During the Obama era, Democrats frequently believed, but only rarely uttered aloud in official forums, that the Republican Party was engaged in economic sabotage. Not a coldly conscious plot, exactly. But it seemed just a little too convenient that the party had reversed its fiscal ideology at precisely the time when doing so would damage Democrats and thereby smooth the GOP’s return to power.”

“Now that Republicans have reversed their position once again, also in a way that happens to redound to their political benefit, the answer seems a little more clear. Republicans have used their control of government to virtually double the budget deficit, which had been hovering around half a trillion dollars per year, and will now likely run well over $1 trillion — during the peak of an economic expansion. There is no economic rationale for this behavior. Their policy is simply to support fiscal contraction under Democratic presidents and fiscal expansion under Republican ones. Cynicism is the only basis to explain their behavior.”

With any budget deal, one of my first questions is: what does @GreensteinCBPP think of it? The tl;dr is he's cautiously supportive, but his full thoughts and analysis are, as always, essential reading. https://t.co/a7yU5DOxmG

“For President Trump, Haiti may be a ‘shithole.’ But on the other side of the island is a country that he clearly thinks could be a goldmine — and a potential windfall for his family’s business empire. The Trump Organization is close to an agreement in the Dominican Republic with a developer to partner on a project on the east coast of the island,” Fast Company reports.

“That’s despite Trump’s promise to avoid any new overseas deals while in office, which was intended to avoid potential conflicts of interest such as foreign governments and companies attempting to win favor with the Trump administration.

If you think Trump is corrupt and authoritarian, then you have to reject not just the president but his party. https://t.co/ssOnkuzDTZ pic.twitter.com/4nmjG4w4wO