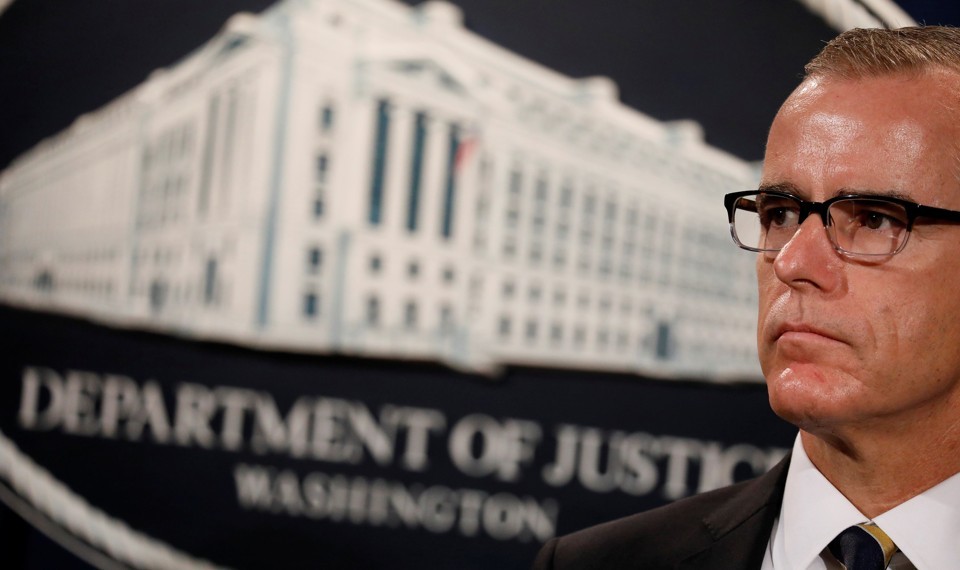 “Andrew McCabe abruptly stepped down on Monday as the FBI’s deputy director after months of withering criticism from President Trump, telling friends he felt pressure from head of the bureau to leave,” the New York Times reports. FBI director Christopher Wray “raised concerns about a forthcoming inspector general report examining the actions of Mr. McCabe and other senior F.B.I. officials during the 2016 presidential campaign… In that discussion… Mr. Wray suggested moving Mr. McCabe into another job, which would have been a demotion.”

The day after Trump fired Comey, he called McCabe to vent over the TV coverage, NBC reports.

Trump demanded to know why Comey was still able to fly on an FBI plane. Trump eventually turned on McCabe, suggesting he ask his wife how it feels to be a loser.https://t.co/yCPcVS8d1w

“The day after President Trump fired James Comey, he became so furious watching television footage of the ousted FBI director boarding a government-funded plane from Los Angeles back to Washington, D.C. that he called the bureau’s acting director, Andrew McCabe, to vent,” NBC News reports.

“Trump demanded to know why Comey was allowed to fly on an FBI plane after he had been fired… McCabe told the president he hadn’t been asked to authorize Comey’s flight, but if anyone had asked, he would have approved it.”

“The president was silent for a moment and then turned on McCabe, suggesting he ask his wife how it feels to be a loser — an apparent reference to a failed campaign for state office in Virginia that McCabe’s wife made in 2015.”

“Republicans on the House Intelligence Committee, disregarding Justice Department warnings that their actions would be ‘extraordinarily reckless,’ voted Monday evening to release a contentious secret memorandum said to accuse the department and the F.B.I. of misusing their authority to obtain a secret surveillance order on a former Trump campaign associate,” the New York Times reports.

“The vote, made along party lines, threw fuel on an already fiery partisan conflict over the investigations into Russia’s brazen meddling in the 2016 presidential election. Republicans invoked a power never before used by the secretive committee to effectively declassify the memo that they had compiled.”

Washington Post: “The vote, which proceeded along party lines in the Republican-controlled committee, now means that President Trump will have up to five days to review the material and decide whether to keep it secret. If he does nothing, the committee can release the memo publicly. The committee also voted along party lines against releasing a rebuttal memo from Democrats, who denounced both moves upon leaving the closed-door hearing.”

Republicans may have to recall all State of the Union tickets because they say "Uniom" not "Union," per two Dem aides. pic.twitter.com/FosSnznIHp

President Trump’s “frustrations with the Russia investigation boiled over on Air Force One last week when he learned that a top Justice Department official had warned against releasing a memo that could undercut the probe,” Bloomberg reports.

“Trump erupted in anger while traveling to Davos after learning that Associate Attorney General Stephen Boyd warned that it would be ‘extraordinarily reckless’ to release a classified memo written by House Republican staffers. The memo outlines alleged misdeeds at the FBI and Justice Department related to the Russia investigation.”

“For Trump, the letter was yet another example of the Justice Department undermining him.”

“I regret things that I did that brought embarrassment to myself, my family, friends of mine who have been very big supporters.” — Former White House press secretary Sean Spicer, quoted by The Hill, on working for President Trump.

Trump will spend the SOTU reciting economic indicators that are the same or worse than Obama’s last years and then list companies that gave one-time bonuses while pocketing billions in profit from his tax cut.

For this, the punditry will declare him the next Reagan.

“The Kremlin said that a new U.S. sanctions report expected to be released imminently was an attempt to influence Russia’s presidential election in March, but predicted it would fail to impact the vote,” Reuters reports.

“The United States could release reports as early as Monday detailing the possibilities for expanding sanctions against Russia, including a list of oligarchs and potential restrictions on the holding of Russian government debt.”

So the big secret behind #ReleaseTheMemo is that the man who Trump selected as his Deputy Attorney General had reason to believe that a former Trump campaign official might be acting as an agent of Russia? And Republicans want this to come out?

Rep. Rodney Frelinghuysen (R-NJ), the chairman of the powerful House Appropriations Committee, announced that he will not seek reelection, The Hill reports.

Cook Political Report: “The burden of proof will be on Republicans to unite around a new nominee and catch up with Democrats in a very challenging political environment. For now, we’re keeping this open seat in the Toss Up column, but Democrats may now be ever-so-slight favorites.”

A new NBC News/GenForward survey finds that 63% of millennials think things in this country are off on the wrong track. Only 18% think the country is generally headed in the right direction, and another 18% aren’t sure.

Sixty-three percent of millennials also disapprove of the way President Trump is handling his job, with 46% saying they strongly disapprove. Only 19% approve of Trump.

Even among those millennials who said they voted for Trump in the 2016 presidential election, 22% disapprove of him now.

“An analysis by Bloomberg Government of historical data, election maps and public polling points to sweeping Democratic gains in the November election, when all 435 House seats and one-third of the Senate are on the ballot.”

“Since the end of World War II, the party in control of the White House has, on average, had a net loss of 26 House seats in midterm elections. Democrats can win control of the House with a net gain of 24 seats in November. They’d need to win two seats to gain a majority in the Senate.”

“Adding to that, Trump’s approval rating at this stage of his presidency, 36 percent, is lower than any of his predecessors going back to Harry Truman, according to Gallup polling data. The less popular the president, the more seats his party tends to lose.”

"We are two tweets away from an extraordinary constitutional crisis. We are at a very dangerous moment in American political life."

I interviewed a historian of Watergate and the FBI about our current moment.

Greg Sargent points out “an important way that the current moment is different from Watergate — a difference that may point to the possibility of a more alarming endgame. The Nunes memo shows there is a massive propaganda apparatus out there — one that reaches deep into right wing media and into the Congress that has been pushing the alt-narrative and would back up Trump if he does take drastic steps — that didn’t really exist in Nixon’s time.”

He quotes journalist Tim Weiner: “You certainly had very influential columnists who were diehard Nixon men. But you did not have a Devin Nunes. You did not have a Sean Hannity. And you did not have an alternate universe of conspiracy theories, in which the FBI was painted as the equivalent of the Weather Underground.”

“It’s the second time O’Rourke has out-raised the Republican favorite in a single fundraising quarter. Following O’Rourke’s news, the Cruz campaign announced it brought in $1.9 million in the final quarter of 2017.”

Also interesting: “O’Rourke has sworn off the help of political action committees. According to the campaign, more than 70 percent of the last quarter’s donations came from Texas, and none of the funds came from loans.”

The real state of the union, as Asawin Suebsaeng and Sam Stein point out, is utter exhaustion: “Trump’s presidency has proven to be a uniquely overwhelming experience, one that’s strained America’s political institutions, stressed its governing officials, and produced a never-ending series of five-alarm political controversies.

It is, in many ways, the polar opposite of the no-drama Obama ethos of the last administration. And those who know the president say that’s by design. Trump has thicker scar tissue than most and his modus operandi has been to claw, scrape, and nag the opposition until they finally acquiesce. It defined his business life and it’s followed him into politics.”

David Leonhardt: “There are good reasons to be wary of impeachment talk. Congressional Republicans show zero interest, and they’re the ones in charge. Democrats, for their part, need to focus on retaking Congress, and railing about impeachment probably won’t help them win votes.”

“But let’s set aside realpolitik for a few minutes and ask a different question: Is serious consideration of impeachment fair? I think the answer is yes. The evidence is now quite strong that Donald Trump committed obstruction of justice. Many legal scholars believe a sitting president cannot be charged with a crime. So the proper remedy for a president credibly accused of obstructing justice is impeachment.”

Gerald Seib: “That might seem like a contradiction, but it actually isn’t. The distinction is important, and is woven through Mr. Trump’s operating style during his first year in office.”

“He relishes stirring up controversy, and, in fact, believes stirring the pot advances his reputation as an outside agitator and improves his position by keeping adversaries off balance. But he usually keeps controversy at arm’s length, using his Twitter feed or offhand comments to attack and posture.”

“By contrast, when he finally comes face-to-face with both friends and foes, his actual positions are often less contentious and rigid than his public posturing suggests. His Twitter bark is worse than his personal bite.”