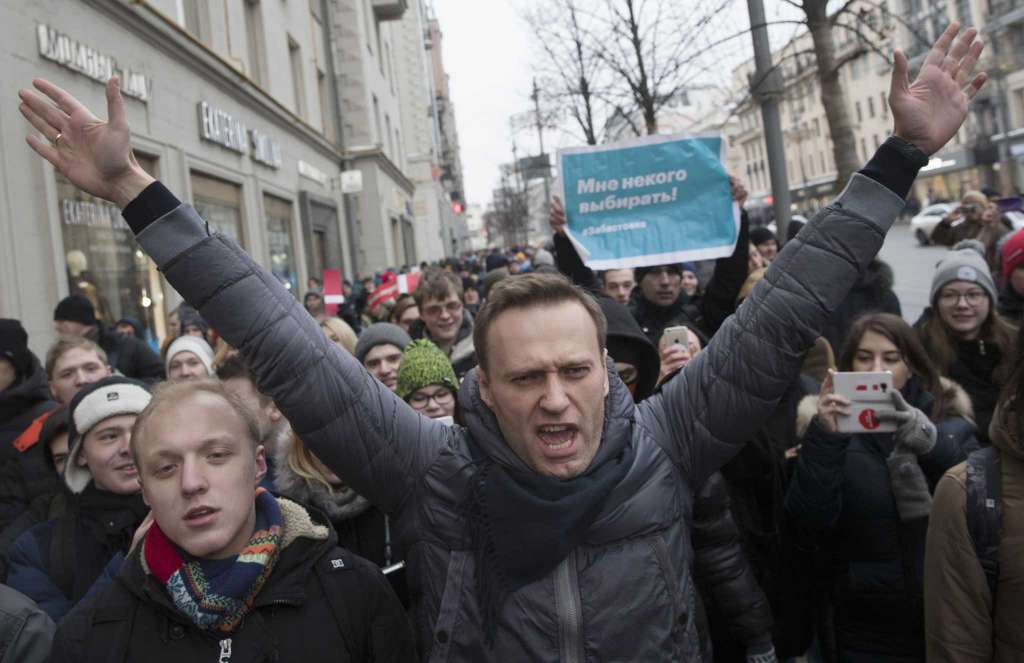 WHAT TRUMP WANTS TO DO.  “Russian opposition leader Alexei Navalny has been arrested in Moscow as protest demonstrations called by him took place across the country,” the AP reports.  “He has called on supporters to continue the demonstrations despite his arrest Sunday.”

REPUBLICAN PUSHBACK ON THE ANTI-MUELLER ATTACKS. “Everybody in the White House knows it’d be the end of President Trump’s presidency if he fires Mr. Mueller.”  — Sen. Lindsey Graham (R-SC), in an ABC News interview.   Looks like the Anti-Trump Lindsday is back.  He also said he would be “glad to pass” legislation shielding Mueller.

Rep. Trey Gowdy (R-SC) said on Fox News yesterday that Mueller is a “fair” investigator and prosecutor, and urged his traitorous Republican colleagues to “leave him the hell alone.”

But, even among the pro-Mueller anti-Trump Republicans, there is “little sense of urgency to advance long-stalled legislation to protect the special counsel despite a report that Mr. Trump had tried to remove him last June,” the New York Times reports.  Said House majority leader Kevin McCarthy (R-CA): “I don’t think there’s a need for legislation right now to protect Mueller. Right now there’s not an issue. So why create one when there isn’t a place for it?”

GRIDLOCK WORSE THAN EVER. “As lawmakers recover from a dispiriting government shutdown and prepare for President Trump’s State of the Union address on Tuesday, Capitol Hill is absorbed with concern that Mr. Trump’s presidency has pushed an already dysfunctional Congress into a near-permanent state of gridlock that threatens to diminish American democracy itself,” the New York Times reports.

“The sense of gloom is bipartisan. A group of Republicans in the House and the Senate are warning of a secret plot in the F.B.I. to overthrow the Trump government. Democrats speak of corruption and creeping authoritarianism, unchecked by a Congress that has turned into an adjunct of the executive.”

“And few lawmakers can muster a word of pride in their institution.“

Trump likes to take credit for the low unemployment rate among blacks, writes @gillianbwhite, but those declines are more a reflection of the sound economic policy of the past decade — they are still much higher than the rate for white Americans: https://t.co/BEw7hKNvY1 pic.twitter.com/8ORFwuPWvk

When Jay-Z called out Donald Trump’s hateful comments about Africa, Haiti, and El Salvador, Trump predictably lashed out in response, and in so doing, he actually dared to take credit for the hard work of another black man, President Barack Obama.

PERJURY PANIC AT THE WHITE HOUSE. Jonathan Swan: “I can’t overstate the level of anxiety among sources close to Trump after the president told the NYT’s Maggie Haberman last week he was willing and eager to submit himself to a live interview under oath with Special Counsel Robert Mueller.”

“One source, who knows Trump as well as anyone, told me he believes the president would be incapable of avoiding perjuring himself.”

Said the source: “Trump doesn’t deal in reality. He creates his own reality and he actually believes it.”

Young, energetic Democratic candidates want to use marijuana legalization as a campaign issue. The moribund party establishment is literally petrified at the prospect despite the immense popularity with voters (and they're afraid of voters too). https://t.co/n6Bm7i7tGD pic.twitter.com/pwa0mX3PGO

The Atlantic has a must-read profile of former Trump campaign chairman Paul Manafort: “When Paul Manafort officially joined the Trump campaign, on March 28, 2016, he represented a danger not only to himself but to the political organization he would ultimately run. A lifetime of foreign adventures didn’t just contain scandalous stories, it evinced the character of a man who would very likely commandeer the campaign to serve his own interests, with little concern for the collective consequences.”

The unemployment rate among African Americans is indeed at a low point but it’s a continuation of an eight year trend that has little or nothing to do with @realDonaldTrump. pic.twitter.com/fSJKLamxcM

“Interns in the Kansas Statehouse are required to sign a sweeping confidentiality agreement that employment law attorneys warn could have a chilling effect on their willingness to report harassment or illegal activity,” the Kansas City Star reports.

“Anything that takes place or is said in a lawmaker’s office stays there, the document says, under threat of immediate termination.”

NBC News: “Travel to the U.S. has been on the decline ever since President Trump took office, and new data from the Commerce Department shows the slump translates to a cost of $4.6 billion in lost spending and 40,000 jobs, according to an analysis by the U.S. Travel Association.”

“The latest data shows a 3.3 percent drop in travel spending and a 4 percent decline in inbound travel.”

A surprise appearance from Hillary Clinton reading Fire & Fury at the Grammys pic.twitter.com/VAYk70pqAj

A year after Trump’s inauguration, the mere appearance of Hillary Clinton at the Grammys in a skit (see above) poking gentle fun at Trump by reading an excerpt of “The Fire and the Fury” is enough to get the Tweeter-in-Chief and his munchkins, including the humorless U.N. Ambassador Niki Haley, all bent out of shape. This presents a potentially useful tactical option for Democrats.  It’s SOP when Trump distracts the press and the public from major issues with inane tweets and comments designed to provoke off-topic storms of outrage. Clinton, who drives Republicans into splenetic rage just by showing up, can throw Trump and his minions off their game with surprise media appearances. In this way, ‘Clinton derangement syndrome’ can be a useful tool for Dems. To drive Trump to total distraction, she should be identified as the “popular vote winner of the 2016 election.”

Speaking to kindred spirit Piers Morgan on the British network ITV, Trump said that, despite what you may have heard, the polar ice caps are actually thriving. “The ice caps were going to melt, they were going to be gone by now, but now they’re setting records,” he said.

The Trump administration is preparing to end support for the International Space Station program by 2025, according to a draft budget proposal reviewed by The Verge.

Without the ISS, American astronauts could be grounded on Earth for years. https://t.co/pNmLcaV9Ja

President Trump says he would take a “tougher” attitude toward Brexit negotiations than the approach now being used by British Prime Minister Theresa May, the AP reports.

Said Trump: “Would it be the way I negotiate? No, I wouldn’t negotiate it the way it’s (being) negotiated… I would have had a different attitude.”

He added: “I would have said that the European Union is not cracked up to what it’s supposed to be.”

"How many of Trump’s early self-inflicted wounds, caused by his impulsive decisions, might have been avoided if someone had simply told him no?" @GrahamDavidA on the impetuous president: https://t.co/VvvqfD7BQe pic.twitter.com/ecaOaOV3sz

“Lawmakers in both parties said Sunday that the immigration debate should focus narrowly on efforts to legalize young immigrants known as “dreamers” and beef up border security, suggesting that President Trump’s demands to slash legal immigration levels are likely to sink a deal,” the Washington Post reports.

STRONG OBAMACARE NUMBERS ENCOURAGE DEMOCRATS. ABC News: “Both parties are paying attention, especially after a better-than-expected enrollment season under the health care law. Democrats especially have used health care to go on the attack, and the issue is coming up in congressional races in California, Colorado, Michigan, Washington and elsewhere. A Kaiser Family Foundation poll released Friday found health care as the top issue voters want congressional candidates to address…Enrollment was especially robust in many of the states that operate their own insurance marketplaces, where enrollment periods were longer than on the federal exchange and promotional budgets were beefed up. Strong sign-ups came despite Republican attacks against the law and President Donald Trump’s administration taking several steps to undermine it, including cutting the federal sign-up period in half and slashing advertising…California, Colorado, Connecticut, Idaho, Maryland, New York, Vermont and other states with their own exchanges saw enrollment approach or surpass 2017 levels. Minnesota’s health insurance exchange set a record for private plans with an enrollment period that was more than two weeks shorter than in 2017.”