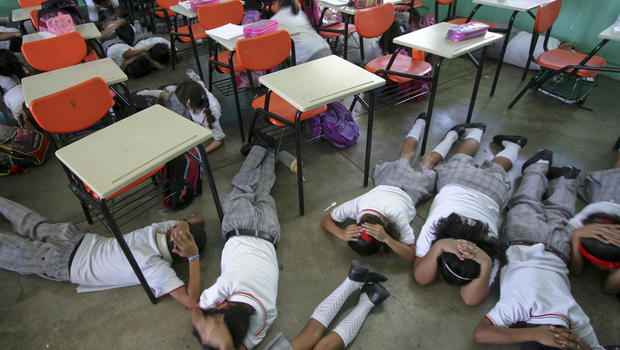 There was a time when mass shootings garnered mass media attention. Those days are gone.

A shooter at Marshall County High School in Kentucky opened fire on Tuesday morning, killing at least two people and injuring at least 17 others.

The suspect, a 15-year-old male student, is in custody, Kentucky Gov. Matt Bevin said, and will be charged with murder and attempted murder. Federal, state, and local police are investigating the shooting.

“It is unbelievable that this would happen in a small, close-knit community like Marshall County,” Bevin said in an earlier statement. “As there is still much unknown, I encourage people to love each other.”

Two students were killed, according to Kentucky Gov. Matt Bevin. A 15-year-old girl, Bailey Nicole Holt, was killed at the scene, and a 15-year-old boy, Preston Ryan Cope, later died at a hospital, police said.

Seventeen others were injured, 12 with gunshot wounds, Bevin said. All the victims are believed to be students.

*The number of injured appears to be higher than 17.

The Governor said: “It is unbelievable that this would happen in a small, close-knit community like Marshall County.”

No. That’s wrong. It always happens there. Schools, Country Music Festivals, churches, movie theaters, etc.. And it’s ridiculous that every time it happens you can rely on someone saying, “It’s unbelievable that this would happen here.”

It happened the day before in Italy, Texas.

In fact, it’s happening a lot:

The scene in Benton, Ky., on Tuesday was the worst so far in 2018: Two 15-year-old students were killed and 18 more people were injured. But it was one of at least 11 shootings on school property recorded since Jan. 1, and roughly the 50th of the academic year.

There have been approximately 14 school days since January 1st. There’s been 11 shootings. That’s almost one per day.

I’d like to propose that we start holding the people, whose unsecured guns are being used in these (and other types) shootings, accountable. If your child gets your gun then you are not a responsible gun owner. You should be charged.

We are becoming desensitized to this, and that must stop. Two children died yesterday. 17+ were injured. America shrugs, and mumbles something about their Constitutional rights and how they are responsible gun owners… until they’re not.