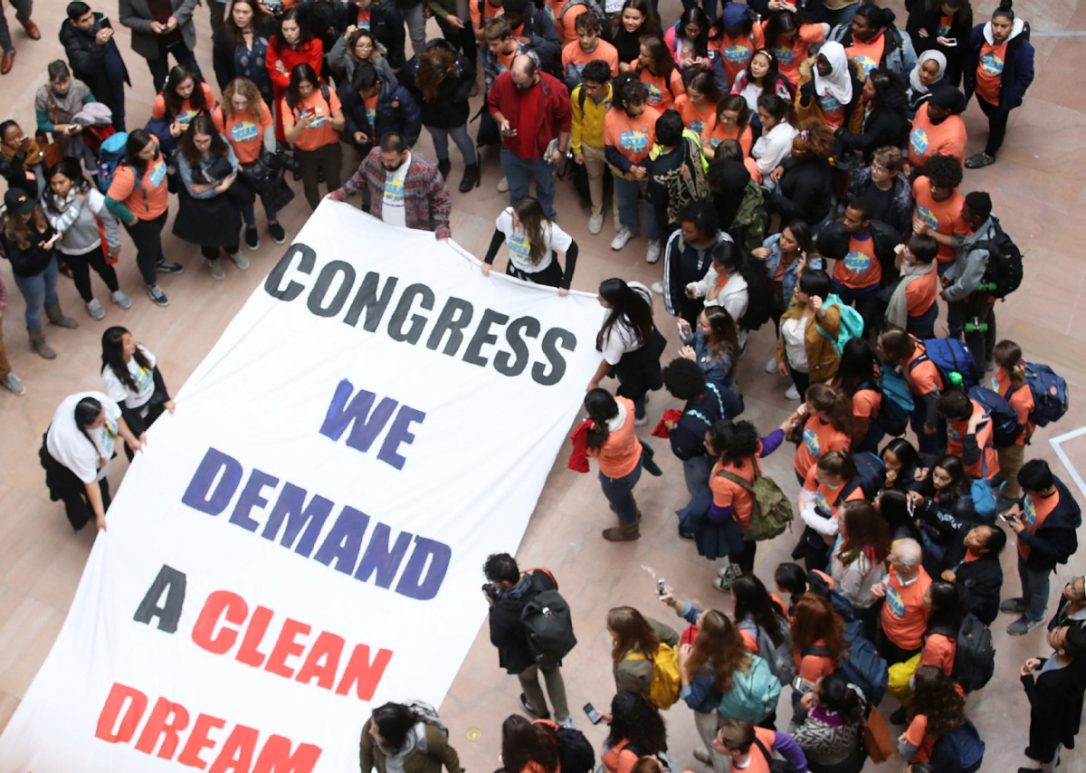 So I think we all need to acknowledge some things.  Did the Democratic Leadership cave?  Yes.   But was it a strategic fold that sets us up to win later on a DACA deal?  That remains to be seen.  But he fight is not over.  More on that below.

You can argue that we have freed the CHIP hostage, and that is true. CHIP is now funded for 6 years and is no longer a bargaining chip that they GOP can threaten us over.   You can argue that we have garnered a very visible commitment by McConnell to take up a DACA bill by February 8.  So if McConnell does not take up a DACA bill by then, then the government shuts down again and everyone knows it is his fault.  So in other words, this DACA fight is not over.  Liberal, progressive, and immigration activists should be pissed but they must not give up.  What we all must do know is up the pressure on everyone. Every Democrat.  Every Republican.   Make their life a living hell.  Giving up and going home now guarantees that the Democrats will cave on February 8.  But if we apply pressure to them now, and give them hell now and between now and February 8, then not only do we persuade them to our side, but we also give them cover and incentive to fight.

But once McConnell gave that inch, and once Lindsey Graham and Jeff Flake accepted it as a good compromise offer, enough Democratic senators lost their cover to continue to oppose the bill.  Those are the red state Senators up for election in 2018, and the bipartisan cover lovers like our own Tom Carper and Chris Coons.    According to the Daily Beast, the two truths that emerged from the Senate deal to reopen the government is 1) the Democrats caved, and 3) Democrats “find themselves somewhat better positioned for what is likely to be another, far more bitter, shutdown battle in the coming weeks.” “McConnell is on the spot to follow through on his pledge to resolve the standoff over the Deferred Action for Childhood Arrivals (DACA) program.”  So if any of the roughly 700,000 Dreamers are deported when the program ends on March 5, Democrats have made clear it’s President Trump and the Republicans who are to blame. And we have also revealed that their pro-DACA statements were all lies.

You can argue that a temporary shutdown would be worth a permanent solution for Dreamers.

But I don’t think Democrats voting to keep government shuttered today would have brought Dreamers closer to a deal. https://t.co/D0anQSWvGq

A BAD HAND. Playbook: “Senate Minority Leader Chuck Schumer (D-NY) was roundly panned in the press and by many Democrats for leading the Senate into a shutdown without a strategy and for being unable to extract any sort of promise from Republicans. Pelosi and other Democrats are vowing not to vote for a spending deal until a DACA compromise is reached. It’s hard to see Democrats having the political fortitude to try to shut down the government again in a little more than two weeks after getting nothing this time around.”

“Schumer had a bad hand here. The base was itching for a conflict, and he gave them one. But he really didn’t have an easy or clear way out. Democrats also misjudged how Trump would react. They thought he would blow up, which would’ve made the shutdown all about him. He didn’t. That strengthened the GOP’s hand.”

Remember this for next time: support for shutting down the government over DACA *grew* during the shutdown.

DACA/DREAM is an issue that benefits from exposure.

Important to remember that on 2/8. https://t.co/EcwZB0skjj

THIS IS A PAUSE IN THE SHUTDOWN/DACA BATTLE.  NOT A LOSS FOR THE DEMS OR A VICTORY FOR THE GOP.  Politico: “Washington will be back on the brink in less than three weeks. Lawmakers may have pulled themselves out of a debilitating government shutdown Monday, but the fight over immigration and spending that’s ground virtually all congressional business to a halt is far from over. And the fundamentals of the debate haven’t changed at all.”

“Republican leaders are under increasing pressure from their own members to reach a long-term budget agreement by Feb. 8, when the government next runs out of money. Their defense hawks are desperate to increase defense spending, a key 2018 priority for President Donald Trump. And their members are sick of voting on short-term funding bills that they say cripple the military.”

“But in order to strike any long-term budget accord, at least nine Senate Democrats are needed for passage. And while Democrats’ strategy of shuttering the government until securing relief for Dreamers blew up in their faces Monday, they can still withhold support for a long-term budget deal to get what they want on immigration.”

Democrats got 6 years of CHIP, kept their shutdown leverage, and created some chance of resolving this through normal legislative channels. It’s a good deal, at least for now. https://t.co/ff0mb2UYwD

WORKING FOR THEIR OWN BENEFIT. McClatchy: “A year into Donald Trump’s presidency, records show five of his top staffers still have not secured final approval of their financial reports — disclosures that are required by law to ensure Americans that these senior officials aren’t personally benefiting from their White House jobs.”

Just a few months on the job and Trump’s second FBI Director is already threatening to resign in the face of overwhelming and inappropriate political interference by the president and his toady AG. https://t.co/Q4xy9xuLID

“Attorney General Jeff Sessions — at the public urging of President Trump — has been pressuring FBI Director Christopher Wray to fire Deputy Director Andrew McCabe, but Wray threatened to resign if McCabe was removed,” Axios reports.  “Wray’s resignation under those circumstances would have created a media firestorm. The White House — understandably gun-shy after the Comey debacle — didn’t want that scene, so McCabe remains.”

I"m skeptical that Schumer blinking will cost D's support/energy of D base in '18. The biggest motivator of D enthusiasm is Trump. https://t.co/OPYxShu1JD

“In buying nearly 50 million records from the state with the nation’s second-largest Hispanic population, a researcher for the Presidential Advisory Commission on Election Integrity checked a box on two Texas public voter data request forms explicitly asking for the ‘Hispanic surname flag notation,’ to be included in information sent to the voting commission, according to copies of the signed and notarized state forms.”

Republicans may have won the government shutdown battle, but there is still no winning strategy for the party on immigration. https://t.co/6GfLSwIORu

HUGE WIN IN PENNSYLVANIA: The Pennsylvania Supreme Court “struck down the boundaries of the state’s 18 congressional districts, granting a major victory to plaintiffs who had contended that they were unconstitutionally gerrymandered to benefit Republicans,” the AP reports.  “The order from the Democratic-controlled court gives the Republican-controlled Legislature until Feb. 9 to pass a replacement and Democratic Gov. Tom Wolf until Feb. 15 to submit it to the court.”

Stephen Wolf estimates that Democrats could gain several House seats with a new nonpartisan map.  Pennsylvania’s congressional delegation is controlled by Republicans, 13 to 5, even though Democratic voters outnumber registered Republicans.

Democrats are allowing Republicans to have it both ways on the Dreamers https://t.co/88avdhRnQo

“The U.S. will impose duties of as much as 30 percent on solar equipment made abroad, a move that threatens to handicap a $28 billion industry that relies on parts made abroad for 80 percent of its supply… The tariffs are just the latest action Trump has taken that undermine the economics of renewable energy.”

It's hard for me to see how the tactical costs of postponing a shutdown fight – for three weeks – outweigh the substantive benefits of immediately ending a months-long children’s healthcare crisis.https://t.co/ktkfExsb2u

TRUMP WANTS TO FIRE KELLY.  Vanity Fair: “Donald Trump’s relationship with John Kelly, his chief of staff, fraught from the beginning, may finally have gone past the point of no return. Two prominent Republicans in frequent contact with the White House told me that Trump has discussed choosing Kelly’s successor in recent days, asking a close friend what he thought about David Urban, a veteran Washington lobbyist and political operative who helped engineer Trump’s victory in Pennsylvania. Ivanka is also playing a central role in the search, quietly field-testing ideas with people.”

“But the prospect of a Trump-Kelly rupture became more probable as news of their clashes over immigration leaked. Last week, Kelly reportedly infuriated Trump when he told Fox News that Trump had ‘evolved’ on his position to build a southern border wall. Kelly further catalyzed Trump’s ire when he told Democratic lawmakers that Trump was ‘uninformed’ when he made his campaign promise to build the wall.”

With this very short shutdown, it’s hard to imagine even a short-term impact on the standing of Trump or the two parties. https://t.co/xdSFydMvW8

TRUMP IS A WEAK NEGOTIATOR. Josh Barro: “The president’s shifting positions are a problem that has contributed to the shutdown. But there’s another, related issue: Members of Congress in both parties believe the president is a weak negotiator. This discourages them from compromising, even among themselves, because they believe they’ll eventually be able to roll Trump closer to their own position.”

“Why cut a deal now when you believe you’ll eventually be able to get Trump alone in a room and he’ll agree to give you more?”

MORE RACISM FROM TRUMP: Senior administration officials told the Washington Post that Trump has been known to “affect an Indian accent” to quote Indian Prime Minister Narendra Modi, who last year condemned U.S. activity in Afghanistan during a private meeting with Trump.

The government shutdown shows just how powerful John Kelly has become—and how he's bringing chaos, not order, to the White House. https://t.co/Zl73HRxdTP pic.twitter.com/QJxHFZFBma

DEMOCRATS CONTINUE WIDE LEAD IN GENERIC BALLOT.  A new Washington Post-ABC News poll more voters prefer a Democratic candidate for Congress than a Republican one, 51% to 39%.

“The poll finds Democrats holding a 57% to 31% advantage among female voters, double the size of Democratic presidential nominee Hillary Clinton’s margin in the 2016 election. Nonwhite women favor Democrats by a 53-point margin, somewhat smaller than Clinton’s 63-point advantage over Trump in 2016. But white women have moved sharply in Democrats’ direction, favoring them over Republicans by 12 points after supporting Trump by nine points in 2016 and Republican candidates by 14 points in the 2014 midterm election, according to network exit polls.”