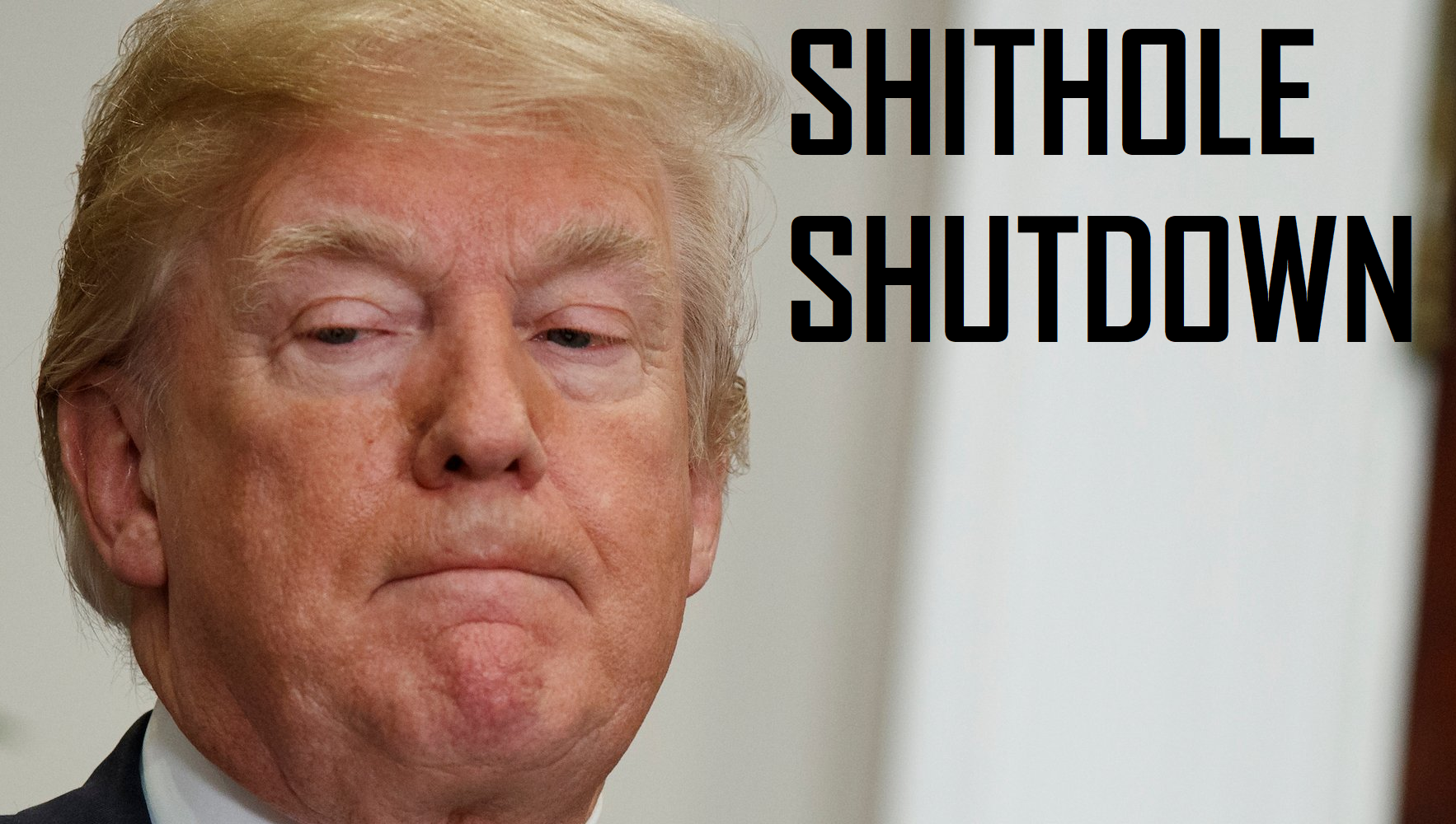 SHUTDOWN. “The House approved on Thursday night a stopgap spending bill to keep the government open past Friday, but Senate Democrats — angered by President Trump’s vulgar aspersions and a lack of progress on a broader budget and immigration deal — appeared ready to block the measure,” the New York Times reports.

“The successful 230-to-197 vote in the House, where the bill’s chances had appeared in question until shortly beforehand, provided only a faint glimmer of hope that a crisis could be averted before much of the government exhausts its funds at midnight on Friday.”

“But in the Senate, at least a dozen Democratic votes will be needed to approve the measure on Friday, and there is little chance those will materialize. Democrats are intent on securing concessions that would, among other things, protect from deportation young immigrants brought to the country illegally as children, increase domestic spending, aid Puerto Rico and bolster the government’s response to the opioid crisis.”

Conservative columnist Jennifer Rubin says “[t]he Republican gambit to blame Democrats — who control neither the House, Senate nor White House — for failure to keep the government running was always a long shot. They are, as they keep reminding us, in charge and have the majorities to keep the government funded. Nevertheless, they’ve tried to convince dubious voters that Democrats are creating a shutdown because of that party’s desire to protect “dreamers” under the Obama-era Deferred Action for Childhood Arrivals, or DACA, program. That’s daft since, once again, a majority of Republicans are available to vote for a spending bill with no DACA fix…What is apparent for all to see is that Democrats have no responsibility to concoct a solution to address the Republicans’ abject incompetence. When a majority party cannot decide what it wants, and cannot find the votes, they are admitting they cannot govern. There is a solution to that: putting the other party in charge.”

Ella Nilsen: “It’s not just some red-state Senate Democrats [who are saying they are not voting for the CR]; others in safer seats who voted for past continuing resolutions said they wouldn’t vote for this one, including Sens. Jeanne Shaheen (NH), Tom Carper (DE), Tom Udall (NM), and Martin Heinrich (NM). Maine Independent Sen. Angus King is reportedly leaning “no” because he’s frustrated with the lack of a long-term spending plan.  And Republicans can’t be assured their caucus will all vote in line; Sens. Mike Lee (R-UT) and Rand Paul (R-KY) have voted against previous short-term funding bills. Graham and Sen. Mike Rounds (R-SD) added their names to the list of “no” votes on Wednesday, saying they were fed up with the stalling from the Trump White House.  “We don’t have a reliable partner at the White House to negotiate with,”  as he walked into the Capitol Thursday morning. “This has turned into an s-show for no good reason, and the only way out of this thing is to grow up a little bit — and I think that’s going to happen.” But at least one red-state Democrat is holding firm and voting for a CR on Friday; as reporters surrounded West Virginia’s Joe Manchin on Wednesday, he had one thing to say.

Tara Golshan says Republicans have always punted on Immigration, so the Dems have no reason to believe them.  “Congressional Republicans are asking Democrats to trust them. Vote to keep the government open and an immigration deal will come soon, they say. […] Congress has until midnight on Friday to avert a government shutdown, and Republicans keep pushing Democrats to leave immigration out of this round of government funding talks. Yet they’ve shown no tangible evidence for Democrats to believe them.  “If I were a Democrat,” one GOP lawmaker said on Wednesday, “depending on promises of what will happen tomorrow is not a wise move.”

Playbook: “As of right now, GOP leadership plans to bring the 28-day stopgap funding bill to the floor late today. Reminder: The measure contains a six-year extension of a key children’s health program, and a delay of a host of Obamacare taxes. The idea: attract some support from Democrats, and make it a bit sweeter for Republicans.” Key thing to watch: “If House Democrats jump in and support the bill after it gets across the finish line, it would be hard for Senate Democrats to vote no.”

The Republican Party’s treatment of CHIP and the children who depend on it has been abhorrent. They could pass a clean CHIP extension today if they chose. To choke the program for four months then hold it hostage against Dreamers is unspeakable. https://t.co/kaFjTDWNFc

Jonathan Swan: “Late last night, a few hours after Fox News aired Bret Baier’s interview with John Kelly, a source close to the president told me Trump would explode when he saw what his chief of staff said. The source — who has spent a lot of time with Trump — predicted the president would hate the interview because Kelly came off as the mature professional who patiently educated an uninformed Trump, and helped him see the light and evolve on The Wall.”

“Sure enough, a few hours later Trump tweets his displeasure.”

Said the source: “Kelly has finally ventured into Steve Bannon territory when it comes to trying to create the perception that he’s the ‘great manipulator,’ saving the country from Trump’s ignorance. The difference is, Steve tried to develop that reputation in off-the-record conversations with reporters. Kelly did it openly on the country’s most-watched cable network. It’s the subtle difference between hubris and arrogance.”

The question isn’t whether Trump is racist (he is) it’s whether harping on that is a good way to defeat racism. https://t.co/dq32PAX6Ns

THE NRA IS A TREASON TUNNEL CONNECTING TRUMP AND RUSSIA. “The FBI is investigating whether a top Russian banker with ties to the Kremlin illegally funneled money to the National Rifle Association to help Donald Trump win the presidency,” McClatchy reports. “FBI counterintelligence investigators have focused on the activities of Alexander Torshin, the deputy governor of Russia’s central bank who is known for his close relationships with both Russian President Vladimir Putin and the NRA.”

Republicans are already turning on Mueller. Worth thinking about how they'll react if he goes after the NRA. https://t.co/1iuU57qqtG pic.twitter.com/JOtQgvVCFg

ANOTHER SPECIAL ELECTION WARNING SIGN.  “Republicans are scrambling to save a heavily conservative House seat in western Pennsylvania, dispatching President Trump to the district on Thursday while preparing a multi-million-dollar advertising campaign to stave off another embarrassing special election defeat in a district that was gerrymandered to stay Republican,” the New York Times reports. “Holding just a 24-seat majority, with retirements of veteran lawmakers piling up, House Republicans can scarcely allow Democrats to snatch a seat they have not even competed for in recent elections.”  “And Mr. Trump is loath to suffer another electoral humiliation, particularly in a district that he carried by 19 percentage points in 2016.”

To wavering Democrats: The choice isn’t between a shutdown fight now and a DREAM Act fight later; it’s between the DREAM Act now or not at all.

Me on the true stakes of this fight. https://t.co/VZjfvp7QhT pic.twitter.com/PBORE4vItd

TRUMP IS A HORRIBLE DEAL-MAKER.  Jill Lawrence wrote an article back in April titled, “Trump is a nightmare negotiating partner.”  “The only constants with Trump are unpredictability and expediency. These are not, suffice it to say, the traditional cornerstones of getting to yes in politics. The real pillars are trust and discretion… Fragmentation in Washington, between Republicans and Democrats but also among Republicans themselves, means we’re in for months of intensive negotiation to get anything done…  But no amount of talking will get anyone anywhere if members of Congress can’t trust Trump to stick to a position, forgo revenge and threats, and demonstrate convincingly that he’s interested in more than his own polling, branding and wealth.”

"The stability of American society depends on conservatives’ ability to find a way forward from the Trump dead end," writes @davidfrum in an excerpt from his latest book. https://t.co/bNb3veUyaO pic.twitter.com/dGWVO2utPU

The educational divide is particularly interesting: “A substantial majority (70%) of registered voters with a postgraduate degree say they would vote for or lean toward the Democratic candidate. A smaller majority (58%) of those with a college degree say the same. By contrast, those with a high school degree or less education are more divided (45% support the Democratic candidate, 48% the Republican candidate).”

“Among whites, the education divide is even wider. By roughly two-to-one, a majority of whites with a postgraduate degree say they support the Democratic candidate over the Republican candidate (65% vs. 29%). Among whites with a high school degree or less education, the reverse is true: 65% support the Republican candidate, compared with just about a quarter (28%) who prefer the Democratic candidate.”

Republican Sen. Tom Cotton is sending cease and desist letters … to his own constituents to keep them from voicing their concerns. https://t.co/wLfOrsLLSZ pic.twitter.com/DsiKrMXY3v

OBAMA TO BE ACTIVE IN MIDTERMS. Politico: “Since leaving office, Barack Obama has struggled with how to do what no previous president has: take on his successor. Over the past year, he’s appeared at rallies, done a robocall, made a few endorsements. His office in Washington’s West End neighborhood, about a mile from the White House, has become a destination for Democrats looking to tap the former president for advice.”

“But with the midterms approaching, people close to him say he’ll shift into higher gear: campaigning, focusing his endorsements on down ballot candidates, and headlining fundraisers. He’ll activate his 15,000-member campaign alumni association for causes and candidates he supports — including the 40 who are running for office themselves.”

SIMILAR TO 2006. Amy Walter: “In fact, when you look more closely at the kinds of districts Republicans are defending in 2018, they don’t look much different from those they had to defend in 2006. For example, there are about as many competitive GOP-held seats in play today in districts with a slight GOP lean (PVI of R+1 to R+5) (23) as there were right before the election in 2006 (22). And, while it’s true that there are few “low hanging fruit” type of districts for Democrats to pick-off (just 23 districts held by Republicans voted for Hillary Clinton), there weren’t many easy lay-ups in 2006, either. Back in 2006, Republicans held just 18 seats won by Democrat John Kerry in the previous presidential election. By the election of 2006, just 15 GOP-held seats (or 27 percent of the total number of GOP-held competitive districts), were in districts that had a slight Democratic lean (a PVI of Even to D+8). Today, of the 40 most competitive seats held by Republicans, 10 (or 25 percent), have a slight Democratic lean (Even to D+5).”

“The 2018 map is not easy for Democrats, but it’s not any more challenging than the one Democrats faced in 2006. Midterm elections are a referendum on the party in power, not the party out of power. However, the dislike for the Democratic party among GOP partisans is more intense today than it has ever been. The question is whether that antipathy to Democrats will be enough to match the anger and opposition to Trump among Democrats and Democratic-leaning voters.”

TODAY’S EDITION OF INSTANT KARMA. Former Gov. Chris Christie (R) was blocked from a VIP entrance he had used for eight years at Newark International Airport and directed to stand in Transportation Security Administration screening lines like anyone else, Bloomberg reports.

An affair is an affair but the problem with secret hush money payments is it’s an invitation to blackmail. https://t.co/Q5AncxEnh8

President Trump’s lawyer “used a private Delaware company to pay a former adult-film star $130,000 in return for her agreeing to not publicly discuss an alleged sexual encounter with Mr. Trump,” the Wall Street Journal reports.

“To further mask the identities of the people involved in the agreement, the parties used pseudonyms.

Trump appointee resigns as public face of agency that runs AmeriCorps after KFile review of racist, sexist, anti-Muslim and anti-LGBT comments on the radiohttps://t.co/uZ3BaFSXZU

“Trump administration appointee Carl Higbie resigned Thursday as chief of external affairs for the federal government’s volunteer service organization after a CNN KFile review of racist, sexist, anti-Muslim and anti-LGBT comments he made on the radio.”