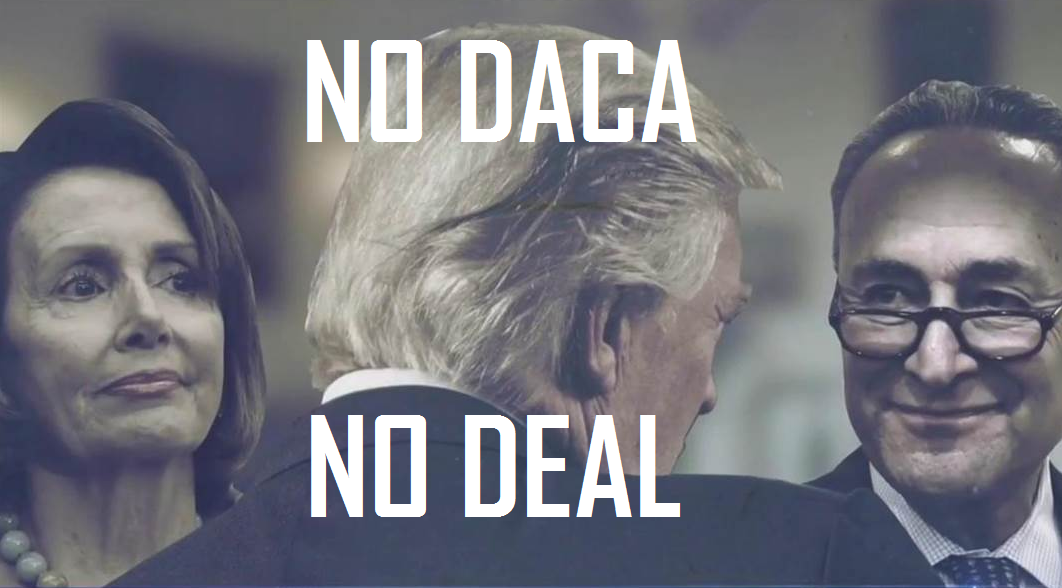 President Donald Trump—with the quiet, but strong support of congressional Republican leaders—has rejected the lone bipartisan proposal on the table to address the expiring Deferred Action for Childhood Arrivals program.  Republicans fully plan to move forward on a short-term funding bill without a DACA deal or resolution.

Nobody wins a government shutdown battle but I do know one thing: If it happens it will be because a bipartisan compromise was rejected by Republicans. Anyone who says they want to avoid a shutdown should be asking for a vote on that compromise legislation.

As Joe Scarborough says this morning on his and Mika’s show, no Democrat should provide a single vote for any short term spending bill unless there is a clean DREAMER/DACA bill attached to it.   Any Democratic effort to give Republicans what they want now, as they are lying to cover for an obviously racist President, will forever disqualify the Democrats from ever governing again because it will prove them weak and spineless.

Meanwhile, Stan Collender seems to think Trump will veto that and shut down the government himself.   Please proceed, Mr. President.

“Technically, a shutdown will occur because the legal authority for the government to spend money will expire. In reality, however, the real reason will be that someone involved in the negotiations will view this as an opportunity to be seen as a political badass by his, her or their base.”

“This week, Donald Trump is most likely to be that person.”

Here's how we can get a bipartisan immigration/shutdown compromise: pretend Donald Trump doesn't exist. https://t.co/RgWUNhvzXf

David Leonhardt and Ian Prasad Philbrick: “The media often falls back on euphemisms when describing Trump’s comments about race: racially loaded, racially charged, racially tinged, racially sensitive. And Trump himself has claimed that he is “the least racist person.” But here’s the truth: Donald Trump is a racist. He talks about and treats people differently based on their race. He has done so for years, and he is still doing so.”

“Here, we have attempted to compile a definitive list of his racist comments – or at least the publicly known ones.”

Former Defense Secretary Chuck Hagel told the Lincoln Journal Star that President Trump “an embarrassment” and said he “is doing great damage to our country internationally.”

If you think Republicans will stop Trump from firing Mueller, you're living in the past. https://t.co/rFvxPGcGzC pic.twitter.com/9jn8B7IdDA

David Frum: “The Trump presidency has been a disorienting moment in American political life. Imagine a time traveler starting in the year 1990. He steps forward 25 years to 2015. Who are the leading candidates for president? Bush and Clinton — again! What are the top issues? Iraq and healthcare — again! Now step backwards 25 years from 1965. The most powerful men in Washington are the head of the AFL-CIO, a federation of 55 unions across the US, and J. Edgar Hoover. There’s a draft and a telephone monopoly and urban riots and liberal Republicans. It’s a different world.”

“I sometimes feel that what Trump has done is restore motion to a political system that froze in place when the baby-boomers reached middle age. What’s coming next? Something radically different. The baby-boomers will keep ageing, and their dependence on government will grow. Trump discovered and confirmed that ethnocultural resentment mobilizes conservative voters better than economic issues ever did.”

“The Republicans seem to be heading for heavy losses in this year’s elections — making Trump even more important as a single remaining focal point for party identity and party loyalty. Voters who cannot stomach Trump, especially college-educated women, are quitting the GOP. What will be left is a party that no longer commands a national voting majority. Only one Republican has done that since 1988 — George W. Bush in 2004 — and then only barely. But what Republicans are also discovering is that with sufficiently ruthless methods, a national voting majority may not be needed to wield national power. That’s part of the meaning of Trumpocracy, and it’s more disturbing than Trump’s fast-food diet.”

"In King’s wake, the effort to dismantle many of the policies he’d fought for became a binding tie for strains of American conservatism." Here's @fivefifths on white backlash to King, and how it culminated in Donald Trump: https://t.co/2OsMClikbm pic.twitter.com/cVuFR4MEfI

Jonathan Swan: “Last year, the head of the White House Domestic Policy Council, Andrew Bremberg, told senior administration officials and Hill staff about an idea he had to tie the hands of future Democratic presidents. The idea would be for Trump to introduce a series of hardcore left-wing regulations — e.g. on climate change, the environment, labor and health care. Then, the Republican-controlled Congress would disapprove of these regulations using a law called the Congressional Review Act. That would bar future administrations introducing ‘substantially similar’ regulations.”

“Trump administration officials are no longer seriously entertaining this idea, largely because Bremberg and others have recognized that it’s politically infeasible. Republicans only have a one-vote margin in the Senate, and there’s no way Mitch McConnell would waste precious floor time on such a moonshot.”

Washington Post: “On Tuesday, when he is sworn in, New Jersey will become one of just eight states where Democrats run every branch of government. If Murphy has his way, New Jersey will become a proving ground for every liberal policy idea coming into fashion, from legalized marijuana to a $15 minimum wage, from a “millionaire’s tax” to a virtual bill of rights for undocumented immigrants.”

“Undergirding all of it: automatic voter registration, early voting and the right to register with a political party as late as Election Day.”

“Murphy’s moves could resonate in other states. Republicans, who control 33 governor’s mansions, are defending 26 of them in this year’s midterm elections. The prospect of New Jersey shifting to the left, smack in the middle of the nation’s largest media market, strikes Republicans as an opportunity to warn voters in swing states of what could happen if Democrats take power.”

A new Gallup survey finds that 61% of Republicans are satisfied with how things are going in the country.  Overall, just 29% are satisfied.

Sen. Linsdey Graham (R-SC) declined to directly confirm President Trump’s “shithole countries” comment last week but told the Charleston Post and Courier, “My memory hasn’t evolved. I know what was said and I know what I said.” Graham privately told Sen. Tim Scott (R-SC) that Trump made the comments.

During a church service attended by Vice President Mike Pence and his wife, a pastor denounced the “shithole country” remarks made by President Trump, WUSA-TV reports. Pastor Maurice Watson called the president’s comments “hurtful” and “dehumanizing” and called for the president to be held accountable for his words. Pence reportedly became “visibly red-faced” at times throughout the speech.

Donald Trump is at his private golf club for the third consecutive day, his 95th day as president at his golf clubs. pic.twitter.com/XOqOxGshew

Washington Post: “From talks about the midterm elections at Camp David to a strategic interjection at a bipartisan immigration meeting, McCarthy, 52, has sought to position himself as Trump’s indispensable man in Congress, an easygoing Republican who gets him — and likes him.”

“Trump has showcased the relationship and appears to enjoy the fidelity of a high-ranking GOP leader. Before having dinner together Sunday… Trump took questions from reporters under the club portico’s ornate arches, with McCarthy standing beside him. McCarthy — who was in the Oval Office Thursday when Trump used a vulgarity to disparage immigrants — stood stone-faced and quiet as the president declared that he is ‘not a racist’ and asserted that those comments weren’t made.”

“McCarthy is aggressive but hardly alone in his embrace. Many Republicans once thought of Trump as a crude intruder but have since developed relationships with the president to try to guide and influence him.”

Fox & Friends host Brian Kilmeade came down on President Trump for his reported “shithole” comments in an Oval Office meeting on immigration, according to Axios. Said Kilmeade: “Bottom line is, unfortunate comments were exchanged.”

On MLK Day, ICE deports Jorge Garcia, a married father of 2 kids in metro Detroit who has lived in the U.S. for 30 years. He was brought to the U.S. when he was 10-years-old by undocumented family members. He's too old to qualify for DACA.https://t.co/de9vpKefmb

“President Trump’s vulgar comments disparaging Haiti, El Salvador and African countries reverberated across the country Friday — including in one immigrant-rich state central to the GOP’s political fortunes where the party was already facing head winds: Florida,” write Sean Sullivan and Lori Rozsa in “Republicans in immigrant-rich Fla. scramble in wake of Trump’s remarks” at PowerPost. “Trump’s reference to “shithole countries” in an Oval Office meeting with lawmakers Thursday sent Florida Gov. Rick Scott, a close ally the president is courting to run for the U.S. Senate, scrambling to distance himself from the controversy. Republican lawmakers issued strongly worded statements condemning what the leader of their party said. And GOP strategists and activists worried about the fallout in a battleground that is home to one of the country’s largest populations of Latin Americans…According to a 2010 Census publication, of the estimated 830,000 people in the United States in 2009 with Haitian ancestry, about two-thirds lived in Florida…”

Brett Samuels reports at The Hill: “A CBS News poll, released Sunday, found 48 percent of Americans say the country is doing well economically, compared to 22 percent who say it’s doing poorly. Another 30 percent said it is neither doing well or poorly, according to the poll…Another 49 percent of respondents indicated they believe the U.S. is run for the benefit of a few elites. By comparison, 28 percent said they believe the country is run for the benefit of the people, while 22 percent said neither, according to the poll, which was conducted Jan. 10-12. As for who gets credit for the economy, bith good and bad, Samuels also notes that “A recent Quinnipiac poll showed 49 percent of respondents gave Obama credit for the current economy, compared to 40 percent who gave Trump credit.”