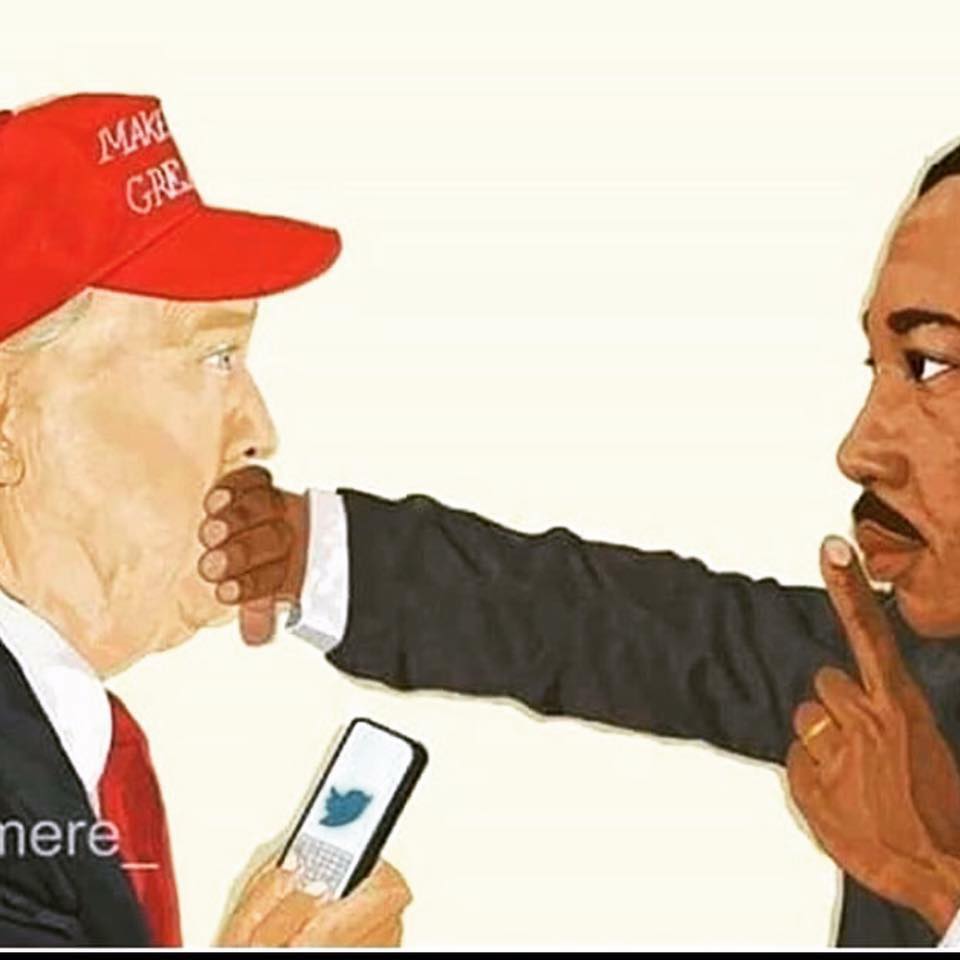 You want to know how we know Trump said the racist things he said, even though he and two integrity-less Senators now deny he said it?  Because conservative radio host Erick Erickson reports Trump himself called friends to brag about it afterwards.  Said Erickson: “I spoke to one of those friends. The President thought it would play well with the base.” He is only denying it now because it did not go over well in any media, including his Fox bubble.

The word “shithole” along with a “poop” emoji was projected onto President Trump’s hotel in Washington, D.C. Saturday night.

Politico: “The GOP is forced to defend 13 states that former President Obama won — from Maine to New Mexico to Wisconsin — while Democrats are protecting just one — Pennsylvania — that fell to Trump. Republicans now admit that a handful of once-competitive battlegrounds are nearly out of reach for them in 2018. Meanwhile, Democratic hopes are rising in a handful of conservative strongholds.”

“When the wave comes, it’s always underestimated in the polls. That is the reason that Republicans are ducking for cover.”  — A conservative political strategist, quoted by the Washington Post.

“A raft of retirements, difficulty recruiting candidates and President Trump’s continuing pattern of throwing his party off message have prompted new alarm among Republicans that they could be facing a Democratic electoral wave in November.  The concern has grown so acute that Trump received what one congressional aide described as a ‘sobering’ slide presentation about the difficult midterm landscape at Camp David last weekend, leading the president to pledge a robust schedule of fundraising and campaign travel in the coming months.”

“But the trends have continued, and perhaps worsened, since that briefing, with two more prominent Republican House members announcing plans to retire from vulnerable seats and a would-be recruit begging off a Senate challenge to Democrat Heidi Heitkamp of North Dakota despite pressure from Trump to run.”

"The evidence for Trump’s racism is so abundant and explicit that the claim shouldn’t even be controversial. And yet, in the wake of the president’s recent comments, our most prominent news outlets are still hedging their bets." https://t.co/brfwdUTuyF via @slate

Said Nyhan: “The group that visited fake news websites the most frequently was the 10% of Americans with the most conservative information diets. These are people who are visiting a lot of websites that are disproportionately consumed and shared by conservatives relative to liberals. It’s not that fake news is a substitute for political news, it’s being added on to a diet of like-minded political news of a more conventional variety.”

He added: “They’re a subset of Americans who follow politics extremely closely. For all the saturation coverage that politics receives, its still a pretty small part of the news diet for most people.”

Also interesting: “Facebook stands out in our data as the site people visited most disproportionately prior to visiting a fake news website. We don’t observe the same pattern with Google, Twitter, or web mail platforms. Journalists love to talk about Twitter, but it just doesn’t compare in reach to Facebook.”

Grassley gets hammered at a town hall in rural Iowa – a county where Trump won 65% of the vote – for “protecting” Trump in Russia probe, among other things, per this report https://t.co/uuZVEyKCnz

“One strategist close to Republican leaders believes that a loss of the House is ‘baked in,’ and said top Republicans don’t see a way to avoid it.”

“It would take a flip of 24 seats for Dems to take over. The average loss for the president’s party in his first midterm is about 32 seats, and we’re hearing forecasts of 40+ losses.”

President Trump tweeted that the Deferred Action for Childhood Arrivals program that he terminated last year is “probably dead” because he claims Democrats aren’t negotiating in good faith.

Said Trump: “DACA is probably dead because the Democrats don’t really want it, they just want to talk and take desperately needed money away from our military.”

However, the Wall Street Journal reports the Trump administration said that it would “resume accepting renewal applications for the Deferred Action for Childhood Arrivals program, bowing for now to a federal court ruling that blocked an effort to end the Obama-era policy.”

Bret Stephens: “I’m not alone. America is a nation of holers. It is an improbable yet wildly successful experiment in the transformation — by means of hope, opportunity and ambition — of holers into doers, makers, thinkers and givers. Are you of Irish descent? Italian? Polish? Scottish? Chinese? Chances are, your ancestors did not get on a boat because life in the old country was placid and prosperous and grandpa owned a bank. With few exceptions, Americans are the dregs of the wine, the chaff of the wheat. If you don’t know this by now, it makes you the wax in the ear.”

Stan Collender: “McConnell said his plan not to do a fiscal 2019 budget was based on a soulless political calculation that his new 51-49 majority will make it hard, very hard or impossible for the Senate GOP to pass its own budget resolution this year, let alone to adopt one that will be acceptable to the House.”

“But what McConnell didn’t say was that the fiscal 2019 budget resolution will be the first that will show the bottom line impact of all the GOP policies: a $1 trillion or higher annual deficit every year of the Trump administration and beyond. Even if Congress and the Office of Management and Budget again choose to ignore the facts, the Congressional Budget Office, Wall Street and other private sector analyses will project annual trillion dollar deficits. McConnell doesn’t want his Republican members to face the political repercussions of having to vote for that.”

For 38 minutes, I felt a combination of helplessness & absolute dread bc I thought a nuclear missile was heading for my hometown. w/ the help of @ahofschneider, I reported on what that moment was like for those on the islands and why it was so significant: https://t.co/cgdMe5tTEB

A new Minnesota Poll finds voters are sharply divided on President Trump’s job performance, 45% to 47%, even as a majority believe he lacks the right temperament for the office and is not always truthful.

“Just 36% said he has the right temperament for the presidency while 58% said he does not, slightly higher than what the Minnesota poll found last April. Meanwhile, 53% of voters said they don’t think Trump generally speaks the truth.”

Sen. Jeff Flake (R-AZ) “is planning to slam President Trump’s attacks on the press on the Senate floor this week in a speech that will compare the president’s use of the term ‘enemy of the people’ to describe the media to Soviet dictator Josef Stalin,” NBC News reports.

From excerpts: “When a figure in power reflexively calls any press that doesn’t suit him ‘fake news,’ it is that person who should be the figure of suspicion, not the press.”

Tomorrow is #MLKDay, and according to @MsPackyetti, if Martin Luther King Jr was still alive, he'd be kneeling with @Kaepernick7, protesting at #StandingRock and fighting for US immigrants. Dr. King may have been nonviolent, but he was still controversial. pic.twitter.com/uq1TPpsHZ9

Following the example of the actresses who wore all black at the Golden Globes this weekend, woman Democrats say they will be doing the same at Trump’s State of the Union address on January 30. They will be wearing black in protest of sexual violence’s prevalence and in solidarity with the many victims who have suffered in silence, according to the Huffington Post.

Margaret Hartman on the problems with the GOP strategy of blaming a government shutdown on Democrats wanting to help illegal immigrants: “First, not every Republican is on board. Senator Lindsey Graham seemed to confirm Durbin’s account, saying “following comments by the president, I said my piece directly to him yesterday.” On ABC’s This Week, Senator Jeff Flake said he talked to the lawmakers immediately after the “shithole” incident and, “They said those words were used before those words went public.”  Flake defended his Democratic colleagues even further, denying that they just want a shutdown.

Convincing people that Democrats deserve most of the blame might be difficult too. In an NBC News/Wall Street Journal poll from mid-December, 62 percent of respondents said Congress should extend protections for DACA recipients, and 19 percent said they should let the program expire. When asked who they would blame if the government shut down, 31 percent said congressional Republicans, 29 percent said congressional Democrats, and 18 percent said Trump. Presumably Trump disparaging “shithole” countries won’t improve those numbers for Republicans.”