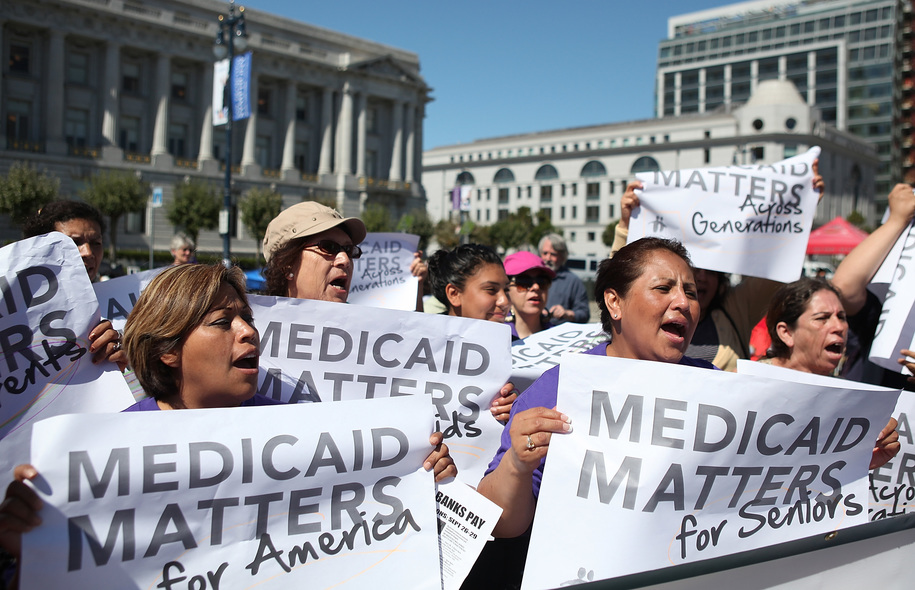 TRUMP ENDS MEDICAID.  “The Trump administration issued guidance to states early Thursday that will allow them to compel people to work or prepare for jobs in order to receive Medicaid for the first time in the half-century history of this pillar of the nation’s social safety net,” the Washington Post reports.  “The new rules come as 10 states are already lined up, waiting for federal permission to impose work requirements on able-bodied adults in the program. Three other states are contemplating them. Health officials could approve the first waiver — probably for Kentucky — as soon as Friday, according to two people with knowledge of the process.”

Under the laws Trump would like to institute, proving libel would be less about meeting a high legal standard than about pleasing him https://t.co/2aNQ9Y7UlA

REPUBLICANS, EVEN THOUGH THEY CONTROL ALL LEVELS OF GOVERNMENT, MIGHT NOT PASS A BUDGET.  “Republican leaders are considering skipping passage of a GOP budget this year — a blow to the party’s weakened fiscal hawks that would squash all 2018 efforts to revamp entitlements or repeal Obamacare,” Politico reports.

“White House and Hill GOP leaders discussed the possibility of forgoing the painful budget process during last weekend’s Camp David legislative summit… Senate Majority Leader Mitch McConnell has argued that he cannot pass controversial deficit-reduction legislation using powerful budget procedures with his new 51-vote majority — and wasn’t even sure he could find the votes for a fiscal blueprint in the first place.”

“But more importantly, it would mean the GOP’s 2018 agenda would be sharply limited: Only with passage of a joint House-Senate budget can Republicans deploy reconciliation tools, which allow them to circumvent the Senate filibuster and bypass Democrats, as they did on last year’s successful tax bill and failed Obamacare repeal push.”

Sometimes the right to vote depends on the right not to vote, as the case before SCOTUS today illustrates. https://t.co/BKC5tbd1bY

REPUBLICANS GO HARD RIGHT ON IMMIGRATION PROPOSALS. “Prominent House Republicans stepped forward with a vision of immigration policy that clashed fiercely with President Trump’s recent overtures of bipartisanship and highlighted how difficult it will be for Congress and the president to reach accord in the coming weeks,” the New York Times reports.

“The proposal, championed by the chairmen of the House Judiciary and Homeland Security Committees, would crack down on illegal immigration and sharply reduce the number of legal immigrants to the United States. Coming one day after Mr. Trump held an extraordinary meeting in which he laid out the parameters for a bipartisan immigration deal, the House proposal highlighted the uncertainty surrounding negotiations that are supposed to coalesce before the government runs out of money on Jan. 19.”

The online @SurveyMonkey polled over 600k Americans in 2017 about Trump's performance. W/previously unpublished data, here's what they found. https://t.co/53FyfPgkMh

TRUMP IS LOSING THE WHITE WORKING CLASS. Ron Brownstein: “Previously unpublished results from the nonpartisan online-polling firm SurveyMonkey show Trump losing ground over his tumultuous first year not only with the younger voters and white-collar whites who have always been skeptical of him, but also with the blue-collar whites central to his coalition.”

“Trump retains important pillars of support. Given that he started in such a strong position with those blue-collar whites, even after that decline he still holds a formidable level of loyalty among them—particularly men and those over 50 years old. What’s more, he has established a modest but durable  beachhead among African American and Hispanic men, even while confronting overwhelming opposition from women in those demographic groups.”

“Together, the results crystallize the bet Trump is making for his own reelection in 2020, and for his party’s chances in November’s election: that he can mobilize enough support among older and blue-collar (as well as rural and evangelical) whites to offset the intense resistance he’s provoked from groups that are all growing in the electorate: Millennials, minorities, and college-educated whites—particularly the women among them

Here's why Trump will kill NAFTA. Also, why he won't. https://t.co/U5uruBaXlV

CANADA FEARS NAFTA DECISION. Canada is increasingly convinced that President Trump will soon announce that the United States intends to pull out of the North American Free Trade Agreement, Reuters reports. “The sources said they expected Trump would make his move at about the same time that negotiators from the United States, Canada and Mexico meet in late January for the sixth and penultimate round of talks to modernize the treaty.”

“Senate Republicans have strategically revved up their attempt to convince President Trump to not withdraw from NAFTA. Some senators and aides say he may not have understood how popular it was with the caucus until recently, and are encouraging him to focus instead on improving it,” Axios reports.

“This is Congress’s clearest shot at saving the trade agreement. If Trump decides to withdraw, Congress probably couldn’t stop him, and both the legal and economic consequences are extremely unclear.”

DONALD FOLLOWS OBAMA’S LEAD ON IRAN.  President Trump “is expected this week to extend relief from economic sanctions to Iran as part of the nuclear deal, citing progress in amending U.S. legislation that governs Washington’s participation in the landmark accord,” the AP reports.  “But Trump is likely to pair his decision to renew the concessions to Tehran with new, targeted sanctions on Iranian businesses and people.”

The fact that Sneaky Dianne Feinstein, who has on numerous occasions stated that collusion between Trump/Russia has not been found, would release testimony in such an underhanded and possibly illegal way, totally without authorization, is a disgrace. Must have tough Primary!

THIS IS NOT THE TWEET OF AN INNOCENT MAN.  Martin Longman: “If, as he keeps telling us, there was no collusion between his campaign and the Russians, and the Steele Dossier is a made-up hatchet job, then he shouldn’t be worried about the release of Glenn Simpson’s testimony. If he’s confident that Diane Feinstein agrees that there was no collusion, then he shouldn’t question her motives. And if he’s legitimately worried, he shouldn’t let us know he’s worried.

On every level, this tweet is a mistake. It demonstrates a complete consciousness of guilt and reveals open irritation that his efforts to misconstrue the dossier have been so solidly undermined. It shows that he was depending on Chuck Grassley to keep the testimony hidden from the public even as he and Sen. Lindsey Graham made a criminal referral against Steele to the Department of Justice.”

I read Glenn Simpson's testimony chronologically, then again as discrete interviews by Grassley's staff and Feinstein's staff. The contrast is extraordinary. https://t.co/fXHH7fKont pic.twitter.com/pTQuJrUD9y

TRUMP FEARS INTERVIEW WITH MUELLER, AS WELL HE SHOULD. President Trump declined to say whether he would grant an interview to special counsel Robert Mueller and his team, deflecting repeated questions on the topic by saying there had been “no collusion” with the Russians during the 2016 presidential campaign and attacking his former opponent Hillary Clinton, the Washington Post reports.  Said Trump: “We’ll see what happens.”  Trump then questioned why he would be interviewed, arguing again there had been “no collusion” between his campaign and Russia: “It seems unlikely you’d even have an interview.”

MUELLER ADDS A CYBER PROSECUTOR. Special counsel Robert Mueller “has added a veteran cyber prosecutor to his team, filling what has long been a gap in expertise and potentially signaling a recent focus on computer crimes,” the Washington Post reports.  “Legal analysts have said that one charge Mueller might pursue would be a conspiracy to violate the Computer Fraud and Abuse Act, if he can demonstrate that members of Trump’s team conspired in Russia’s hacking effort to influence the election.”

Marshall: "In our current system, the concerted actions of one bad-acting political party coupled with the media imperative to enforce ‘balance’ even when it means false equivalence can be highly, highly distorting" https://t.co/WQ3kyIqJdv pic.twitter.com/nv7hGCbAD9

DEMOCRATS FINALLY FIGHTING LIKE REPUBLICANS.  “Some Democratic House members are planning to invite victims of sexual assault to President Trump’s State of the Union address later this month to highlight the issue,” NBC News reports.

HILLARY IS NOT RUNNING AGAIN, DONALD.  President Donald Trump on Wednesday called Hillary Clinton his “opponent” and deflected questions about his administration by invoking Clinton’s stated positions, though it is nearly a year since Clinton last participated in politics.

I think a very likely endpoint of the Mueller investigation is a report arguing that Trump obstructed justice and a GOP Congress that simply refuses to do anything about it. https://t.co/Ts1KQzYW7d

A new Quinnipiac poll finds Democrats with a massive 17-point lead over Republicans in the generic congressional ballot, 52% to 35%. Also interesting: Voters disapprove of the recently enacted Republican tax plan, 52% to 32%.

At best, the decision to spare Florida (and only Florida) from offshore drilling is a political stunt. At worst, it’s a gift to Mar-a-Lago. @EricLevitz writes https://t.co/ZHwb7T0NF2

Jonathan Chait: “During his morning Executive Time, President Trump took a well-deserved break from his long hours of document study to watch Fox News. The segment featured one of the talking heads urging Trump to oppose the House bill reauthorizing the Foreign Intelligence Surveillance Act (FISA). The president immediately tweeted out his alarmed confusion that the House was apparently on the verge of approving the very law the sinister Deep State had used to ‘tapp’ his phones.”

Jonathan Swan reports that sources in the GOP leadership “were horrified.”

Lawfare: “When the history of President Trump’s use of Twitter is written, there will be a stiff competition for his most destructive, most irresponsible tweet. A strong contender for that less-than-august honor came Thursday morning.”

Washington Post: “The number of House Republicans planning to forgo reelection bids this year is on track to outpace majority-party retirements in any recent election where control of the chamber flipped — an ominous sign fueling GOP fears of a political wave that could shift power to Democrats in November’s midterm elections.”

Politico: “The 44 House members not seeking reelection this year — 29 in Republican-held seats and 15 in Democratic-held seats — puts 2018 in the company of past wave-year elections when control of the House changed hands.”

David Wasserman: “I don’t think people have fully priced in how much worse things could get for House Republicans in the next 300 days.”

We're at a crossroads in our Democracy https://t.co/vyFgyiAsoP

TRUMP IS STILL GUTTING OBAMACARE.  Politico: “Early last year as an Obamacare repeal bill was flailing in the House, top Trump administration officials showed select House conservatives a secret road map of how they planned to gut the health law using executive authority. The March 23 document, which had not been public until now, reveals that while the effort to scrap Obamacare often looked chaotic, top officials had actually developed an elaborate plan to undermine the law — regardless of whether Congress repealed it.”

““The blueprint, built off the executive order to minimize Obamacare’s ‘economic burden,’ that Trump signed just hours after taking the oath of office, shows just how advanced the administration’s plans were to unwind the law — plans that would become far more important after the legislative efforts to repeal Obamacare failed.”