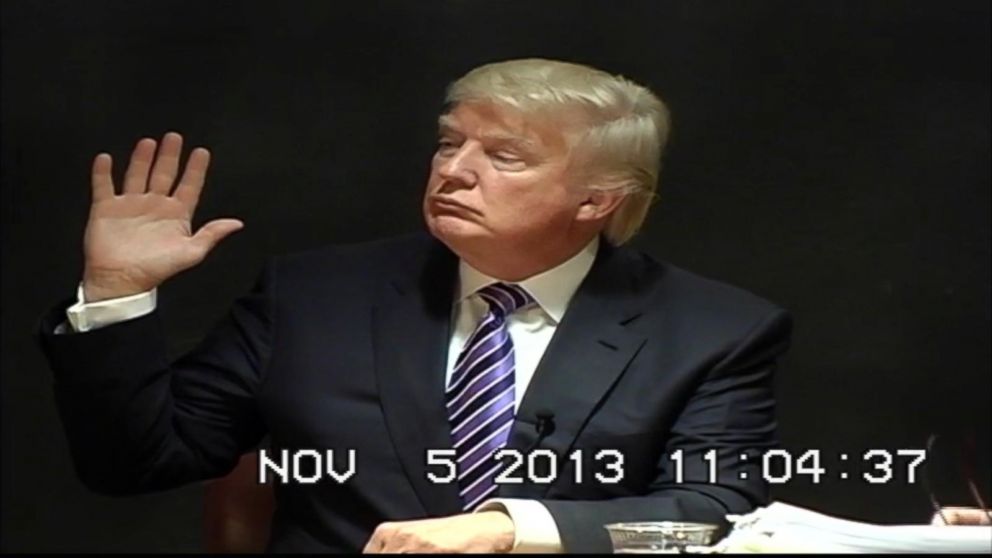 Special counsel Robert Mueller “has raised the likelihood with President Trump’s legal team that his office will seek an interview with the president, triggering a discussion among his attorneys about how to avoid a sit-down encounter or set limits on such a session,” the Washington Post reports.  Said one source: “This is moving faster than anyone really realizes.”

“However, the president’s attorneys are reluctant to allow him to sit down for open-ended, face-to-face questioning without clear parameters.”  That is quite wise.  If Trump were put under oath in a sworn deposition in this circumstance, it is guaranteed that he would perjure himself.  And even if this is an unsworn interview, lying to the FBI and the Special Counsel is still a crime, one he would undoubtedly commit.

Not to mention, in Atlanta, Georgia, in a game between Alabama and Georgia, all Trump country, at least in the last election, boos definitely outnumbered the cheers at the introduction of the President.

“Before Donald Trump and Steve Bannon were enemies, they were allies. And not long before that, Bannon was part of an effort to sink Trump’s presidential hopes — even if Trump didn’t know it,” CNN reports.

“A conservative watchdog group led by Bannon tried to discredit Trump in the early stages of the 2016 Republican presidential primary by shopping a document alleging that Trump had ties to mobsters.”

Get a grip, people: Oprah should not run for president: https://t.co/fy8e3Jtaxt

Nate Cohn: “The stock market has surged. Unemployment is at 4.1 percent. ISIS has largely been vanquished from Iraq and Syria.”

“But despite it all, Donald J. Trump’s approval ratings are mired in the upper 30s. No president has had worse ratings at this stage of his term since modern polling began more than three-quarters of a century ago.”

“Setting aside the question of how much credit first-year presidents deserve for a strong economy — they have less influence than you might think — President Trump’s ratings should be much better. A 4.1 percent unemployment rate, the lowest in 17 years, is more typically associated with a 60-plus-percent approval rating for a first-term president.”

Ben Smith: “So the case against Oprah is just that: She may, in fact, be what Trump pretends to be — a self-made business success story whose words resonate across the country. But Democrats don’t want to improve on Trump. They want to reverse him. And that’s where governors and senators with deep experience, proven political chops, and an unglamorous sense of normalcy come in.”

“Trump has also made a strong case to Oprah on why she shouldn’t run. To run for president is to ensure, demand even, that at least 40% of Americans hate you. The one recent political poll on Oprah hints at this: She had a surprisingly high, 33%, unfavorable rating. Who dislikes Oprah? When you put her in a political context, Republicans do, it turns out. And Oprah has had her ups and downs, and would be signing on for the sort of hostile examination of her own career that nobody would welcome.”

CNN: Six times Oprah stoked — or shot down — 2020 speculation.  Two of her close friends told CNN that Oprah is “actively thinking” about running for president.  “One of the sources said these conversations date back several months. The person emphasized that Winfrey has not made up her mind about running.”

Playbook: “She has said she’ll never run for public office but, why not? We bet she has pretty high approval ratings among, well, everyone. She’s universally known. She’d raise the money quite easily. She’s a billionaire, so she could say she has business chops. Imagine Donald Trump talking trash about Oprah! Quite frankly, there isn’t any clear Democratic favorite that would clear the field at the moment. Don’t count someone like her out.”

What does the Oprah boomlet say about Democrats? Among other things, writes @GrahamDavidA, that they still haven't decided whether Trump is a dangerous anomaly or just a particularly extreme Republican: https://t.co/NxM2H5LwRS pic.twitter.com/Om8EynCkkN

“Democratic donor Tom Steyer, who has spent more than $100 million since 2016 on political campaigns, will forgo any run for office this year and focus instead on ending Republican control of the House of Representatives,” the Washington Post reports.

Said Steyer: “I’ve said all along, the question I always ask is: Where can I make the most differential impact? And when I look at the jobs I can run for in California, they all have reputable Democrats running for them already.”

“Steyer’s decision removes some of the drama from California’s races for governor and U.S. Senate, which had attracted ambitious Democrats who had been wanting to move up for years.”

“The Trump administration has canceled the provisional residency permits of about 200,000 Salvadorans who have lived in the country since at least 2001, leaving them vulnerable to deportation,” the Washington Post reports.

“The administration will notify the Salvadorans they have until Sept. 9, 2019 to leave the United States or find a new way to obtain legal residency.”

New York Times: “Salvadorans were by far the largest group of foreigners benefiting from temporary protected status, which shielded them from deportation if they had arrived in the United States illegally. The decision came just weeks after more than 45,000 Haitians, the second largest group, lost protections granted after Haiti’s 2010 earthquake, and it suggested that others in the program, namely Hondurans, may soon lose them as well. Nicaraguans lost their protections last year.”

What "Fire and Fury" tells us about Trump’s foreign policy is terrifying https://t.co/27ajFdWcFJ

“Steve Bannon, like his onetime brother-in-arms President Trump, is known as someone whose instinct is to double down, not kiss up. That made his belated attempt on Sunday to de-escalate mounting tension with the commander-in-chief — who has been publicly and privately raging about his former chief strategist all week — notable to many of his allies, one of whom called it a ‘huge step for Steve, one of the most stubborn people on Earth,’” Politicoreports.

“But inside the White House, Bannon’s 297-word statement of contrition about comments he made in Michael Wolff’s Fire and Fury: Inside the Trump White House was seen as too little, too late for an operative unaware of the self-inflicted damage his hubris could cause. It did nothing to quell Trump’s rage at his former chief strategist or the anger of Bannon’s former West Wing colleagues, according to multiple administration officials, who said the vibe in the president’s circle was that people were unmoved by the statement.”

New York Times: “A prominent donor to the Democratic Party says she is considering withdrawing support for senators who urged their colleague Al Franken to resign after he was accused of sexual misconduct. The donor, Susie Tompkins Buell, has been one of the Democratic Party’s most generous supporters for decades.”

Oprah has many strengths but Democrats as a party tend to prefer experience pols. https://t.co/lll4bgwDfT

Washington Post: “President Trump expressed misgivings about his administration’s infrastructure plan Friday at Camp David, telling Republican leaders that building projects through public-private partnerships is unlikely to work — and that it may be better for the government to pursue a different path. Then on Saturday morning, Gary Cohn, the president’s chief economic adviser, delivered a detailed proposal on infrastructure and public-private partnerships that seemed to contradict the president. He said the administration hoped $200 billion in new federal government spending would trigger almost $1 trillion in private spending and local and state spending, according to people familiar with his comments.”

“The federal probe into a 2010 land deal orchestrated by former Burlington College president Jane Sanders, wife of U.S. Sen. Bernie Sanders (I-VT) has deepened. VTDigger has confirmed that a grand jury has been empaneled and has taken sworn testimony in the case.”

Gallup: “Last year, 42% of Americans, on average, identified as political independents, erasing the decline to 39% seen in the 2016 presidential election year. Independent identification is just one percentage point below the high of 43% in 2014. Twenty-nine percent of Americans identify themselves as Democrats and 27% as Republicans.”

Officials hope to utilize the footage to track citizens’ activity and beliefs, eventually assigning everyone a “social credit” score representing whether the government can trust the person.

President Trump “gets his first physical since taking office on Friday, but Americans may not find out much about the health of the 71-year-old chief executive with a taste for McDonald’s and an aversion to exercise beyond golf,” Bloomberg reports.

“Trump, like all Americans, has the right under federal law to keep health information from public disclosure. The White House has pledged, though, that physician Rear Admiral Ronny Jackson will issue a public report on the exam, scheduled for Jan. 12 at Walter Reed Medical Center in Bethesda, Maryland.”