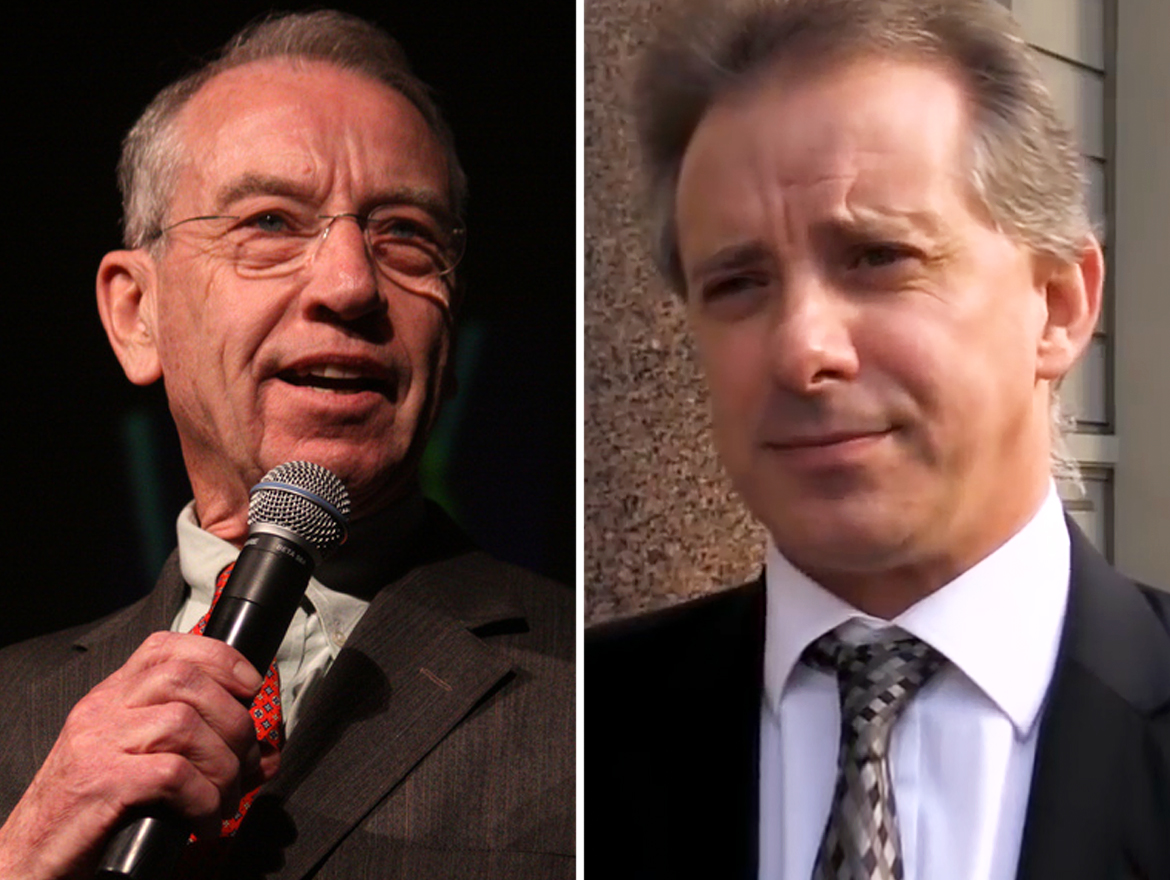 “The Republican chairman of the Senate Judiciary Committee recommended that the Justice Department investigate for possible criminal charges the author of the now-famous ‘dossier’ alleging the Trump campaign coordinated with the Kremlin during the 2016 election,” the Washington Post reports.

“The move by Sen. Charles Grassley (R-Iowa) marks a major escalation in conservatives’ challenges to the FBI’s credibility as the agency investigates whether any Trump associates committed crimes.”

Good point from @brianbeutler: Bannon was excommunicated from the GOP in part for pointing out that Trump collusion with Russia is a legitimate topic of inquiry:https://t.co/d0Ce1lnDQq

“Speaker Paul Ryan backed his fellow congressional Republican, House Intelligence Chairman Devin Nunes (R-CA), during a meeting over the Russia investigation Wednesday, capping off a months-long dispute between the committee and the Justice Department, CNN reports.

“Over the summer Nunes served subpoenas seeking a broad range of documents connected to the dossier of compromising allegations about President Trump’s connections to the Kremlin… While Ryan had already been in contact with Rosenstein for months about the dispute over documents, Rosenstein and Wray wanted to make one last effort to persuade him to support their position… During the meeting, however, it became clear that Ryan wasn’t moved and the officials wouldn’t have his support if they proceeded to resist Nunes’ remaining highly classified requests.”

Politico: “White House staffers are poring over copies of Michael Wolff’s forthcoming book, scanning the index for their names and crossing their fingers that they aren’t mentioned… The book is also reviving frustration with other former aides whom the president’s close advisers have long suspected of leaking to the press. Former White House deputy chief of staff Katie Walsh, who was quoted in the book saying that managing the president was ‘like trying to figure out what a child wants,’ is under fire from some in the administration for her apparent role in the book.”

“Or put another way, while Donald Trump’s first year as president has been pretty good overall for job creation, Americans nevertheless saw the slowest job growth in six years.”

Matthew Gertz: “Everyone has a theory about Trump’s hyper-aggressive early morning tweetstorms. Some think they are a deliberate ploy the president uses to distract the press from his administration’s potential weaknesses, or to frame the public debate to his liking. Others warn his rapid shifts from one topic to another indicate mental instability.”

“But my many hours following the president’s tweets for Media Matters for America, the progressive media watchdog organization, have convinced me the truth is often much simpler: The president is just live-tweeting Fox, particularly the network’s Trump-loving morning show, Fox & Friends.”

Donald Trump's closest aides have reached the same conclusion in private that scores of mental-health professionals have made in public https://t.co/LsGPltdGsN

Mike Allen and Jim Vande Hei: “There are definitely parts of Michael Wolff’s Fire and Furythat are wrong, sloppy, or betray off-the-record confidence. But there are two things he gets absolutely right, even in the eyes of White House officials who think some of the book’s scenes are fiction: his spot-on portrait of Trump as an emotionally erratic president, and the low opinion of him among some of those serving him.”

“In the past year, we have had many of the same conversations with the same sources Wolff used. We won’t betray them, or put on the record what was off.”

Janice Min, who was one of six people at the Steve Bannon-Roger Ailes dinner at Michael Wolff’s townhouse in January 2017, told MSNBC that every word from the evening detailed in Michael Wolff’s new book, Fire and Fury, is accurate.

Wall Street Journal: “The Trump administration is asking Congress for nearly $18 billion to construct more than 700 miles of new and replacement barriers along the southwest border, offering its most detailed description yet of the president’s vision for a border wall with Mexico.”

So.  Americans are paying for the pay if Trump has his way.  Not Mexico.  Another lie.

The Democrats have rejected this proposal in its entirety.  “President Trump has said he may need a good government shutdown to get his wall,” Durbin said in a statement. “With this demand, he seems to be heading in that direction.”

Key context from @DavidCornDC: The latest push on Steele is only the latest in a series of smokescreens that Rs have thrown up to discredit the ongoing Russia probe:https://t.co/iizQNDQjcS

“The briefing will be part of a broader slate of meetings between the president and Republican congressional leadership to take place at Camp David through the weekend, when they are scheduled to discuss the legislative agenda for this year. Also attending will be House Speaker Paul Ryan (R-WI), House Majority Whip Steve Scalise (R-LA) and Senate Majority Whip John Cornyn (R-TX).”

Andrew Sullivan: “Just because a drunk driver hasn’t crashed for a quarter of his journey home carries no assurance that catastrophe isn’t still eminently possible. But it seems possible, after a year of this insanity, to entertain some measure of hope that it will some day be over, and the country and the world not irrevocably damaged in the process. There may even be hope that the confirmation of everyone’s darkest fears about this president’s functionality may at some point break through, and perhaps after a drubbing in the fall elections, the GOP might even begin to reassess its reckless gamble. No, I’m not optimistic about this, but hope flickers in the distance. Reality at some point could finally intrude upon the reality show.”

Josh Marshall: “Through all this, remember a simple point: on the big question of actions between Russia and the Trump campaign, they are certainly guilty as charged. As I explained yesterday, how far it went, how high it goes, whether Trump himself crossed a line that can be proven, all of those questions are yet to be determined. But fundamentally, Trump and his associates have grave misdeeds to cover up. All the chaos of the last 48 hours is merely a continuation of that. The idea that a sitting President can seek to silence critics and silence dissent using the civil courts is as monstrous as it is comical and is entirely in keeping with the practice of broken democracies that slip into autocracy. (And yes, even though it’s Steve Bannon, it’s still dissent.) But it’s chaos and impulse and incompetence at the core.

Have you ever seen a coiled hose that suddenly has hugely pressurized water run through it? We all have. It swings and jerks violently this way and that. It gets everyone wet. There’s violence and chaos but no real plan. It’s reflex. That’s our President. But it’s not water. It’s fire. This instinctive, peristaltic kind of chaotic action is the way to understand him. Not any theory. That’s what’s happening today and will continue for every day of his Presidency, albeit with lulls of lethargy and torpor here and there.

He is likely the most reviled and mocked man in the entire world today. He is also the most powerful, because of the unique attributes and powers of the American presidency. He’s tossing around nuclear threats with another man on the other side of the globe who has power similarly because he was born into it. Another legacy kid with nuclear weapons. The whole situation is comical, mind-boggling and deeply dangerous.

Rick Wilson: “Steve Bannon’s spectacular fall from grace in Trump World is a big, salty, delicious bowl of schadenfreude from the political gods in celebration of the new year.”

“Bannon wasn’t just one of Trump’s most senior aides and an architect of the destruction of the Republican Party; he was the multi-shirted, red-eyed White House troll, leaking tales of his brilliance to a constellation of reporters in the ostensibly hated mainstream media. His house organ Breitbart and a host of Trump-right websites and news outlets sang praises to his dank genius. Bannon, they proclaimed, was Trumpism in its distilled essence: revanchist, ahistorical, racially inflected, and consumed with an imaginary war on the media and America’s broader society.”

“Now, like two rats in a bag, Trump and Bannon are tearing at one another in a delicious public spat that has every possible bit of drama, except Bannon drunkenly bellowing for a round of fisticuffs with all comers and Trump offering to compare the length of their relative manhoods on live television. They deserve one another in so many ways.”

James Hohmann: “With the proposed expansion of offshore drilling and a crackdown on marijuana, the Trump administration created huge political headaches Thursday for scores of Republicans who were already facing a tough environment in 2018.”

“Both moves are unpopular with voters, especially key people in places that are likely to determine whether the GOP holds the House. In practice, these two stories probably pose bigger challenges for the president’s party in the midterms than any book about White House dysfunction.”

Trump wants to use law enforcement to harass his political enemies. It's working. https://t.co/5x7WqBwWtF pic.twitter.com/wDRSEDrZP2

Jonathan Chait: “There are two ways for a president to corrupt the vast powers of federal law enforcement. The one that has commanded the greatest attention so far is the defensive corruption of curtailing investigations into the administration and its allies (by, say, firing Robert Mueller). The other is offensive, by directing investigations into the administration’s political critics. And while this form of corruption has attracted less attention, Trump appears to have made far greater headway here.”

“A year ago, the prospect that law enforcement would be investigating Hillary Clinton, the Clinton Foundation, and Christopher Steele would have been unthinkable. At the moment, it seems hard to imagine the Republican Party raising any objection.”

Jeffrey Toobin: “You heard it here first. There will be calls for a criminal investigation, and probably an actual F.B.I. investigation, of the Democratic nominee for President in 2020. Doesn’t matter who it is.”

“Republicans are launching an aggressive ground game in Pennsylvania’s 18th Congressional District more than three months before voters head to the polls for the special election,” WPXI reports.

“This is a race to replace Rep. Tim Murphy (R-PA), who resigned after revelations that he asked his mistress to have an abortion during a pregnancy scare.”

“Republicans, though publicly supporting state Rep. Rick Saccone, have fears  about their candidate’s chances against Democratic nominee Conor Lamb. A Republican campaign strategist described the race as a ‘D-candidate’ versus an ‘A-candidate,’ indicating he did not see the Republican as the strongest candidate in the race.”

“The FBI has been quietly investigating the Clinton Foundation for months, reviving a probe that was dialed back during the 2016 election amid tensions between Justice Department prosecutors and FBI agents about the politically charged case,” the Washington Post reports.

“The investigation is being run out of the FBI’s field office in Little Rock, where the foundation has offices in the William J. Clinton Presidential Center, the people said. Agents are trying to determine if any donations made to the foundation were linked to official acts when Hillary Clinton was secretary of state from 2009 to 2013.”