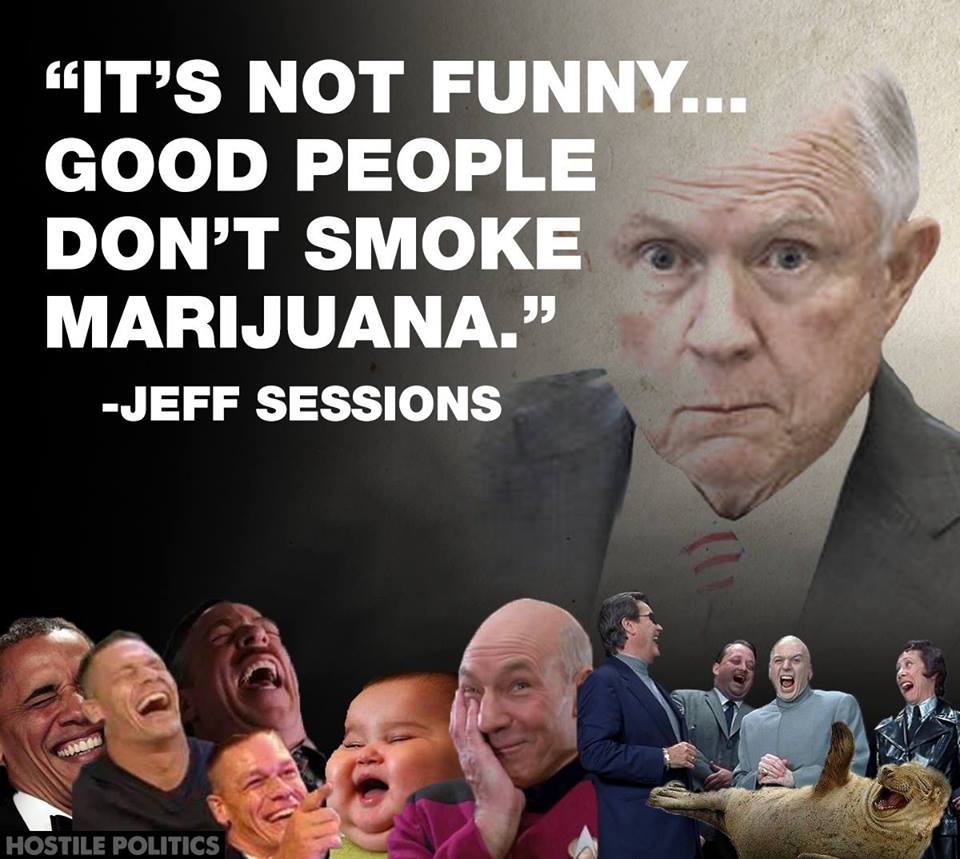 *Size may vary.  **Rights subject to change without notice.

Attorney General Jeff Sessions is rescinding a policy that allowed legalized marijuana to flourish in states across the country without federal intervention. https://t.co/cCSBb2uFwb

If you have found it difficult to understand what States have rights to do or not do with this current administration, you aren’t alone.  AG Jefferson Beauregard Sessions has decided that since pot = heroin,

Sessions’ policy will let U.S. attorneys across the country decide what kinds of federal resources to devote to marijuana enforcement based on what they see as priorities in their districts, the people familiar with the decision said.

Ah yes. People accountable to only the Federal DOJ, rather than a State’s DOJ, get to determine what’s in a State’s “best interest” regarding marijuana laws that disproportionately affect minorities even if said State’s voters and/or legislators have legalized medical and/or recreational pot.

“There is no more safe haven with regard to the federal government and marijuana, but it’s also the beginning of the story and not the end,” said Kevin Sabet, president and CEO of Smart Approaches to Marijuana, who was among several anti-marijuana advocates who met with Sessions last month. “This is a victory. It’s going to dry up a lot of the institutional investment that has gone toward marijuana in the last five years.”

First of all. An organization that calls itself “Smart Approaches” to anything loses all credibility the moment it advocates outdated, regressive, and racist modalities as a means to make something better. Secondly, this “institutional investment” he refers to drying up has been funding schools, educational programs, *law enforcement*, and public works to name a few things. Lastly, such investment won’t “dry up” at all. It will shift it back over to the black market which is exactly where it was before 8 states and DC legalized pot.

According to Wiki Anti-plant Activist Kevin Sabet is a graduate of University of California Berkeley, and Oxford University with a doctorate in social policy. He worked for the Obama administration and is an opponent of drug legalization at any level. He does support abolishing mandatory minimum sentencing laws related to drug use or possession and has argued for removing criminal penalties for low-level marijuana use (aka- decriminalization). I guess they skipped over the prohibition period for alcohol in the US during his social policy classes. Even so, he doesn’t really seem like a total idiot.

In September 2016, Sabet admitted lying multiple times to a forum at the Edward M. Kennedy Institute for the United States Senate, when he claimed to possess two bags of candy one of which was infused with marijuana.[14] After the forum concluded, Sabet left both bags of candy unattended, which were subsequently stolen. He was chastised for leaving a controlled substance unattended only to be caught lying about the contents of the bags.[15] The attendee of the forum who stole the bags submitted them to a laboratory for testing of their levels of marijuana content. Dr. Saunders’ report was conclusive that neither bag of candy contained any THC (the psychoactive compound of marijuana).[16] The story was reported in a news broadcast, which claimed that Sabet admitted there was never any marijuana in the props he presented to the forum.

Ok…so the jury’s still out on the whole idiot thing.

Anyway, it makes me wonder why exactly he’s cheering on Jefferson Beauregard Sessions rescinding the Obama order informing US Attorneys to shift their focus away from marijuana enforcement. Especially when we have no clue what Sessions’ boss thinks about marijuana and legalization.

Sessions and some law enforcement officials in states such as Colorado blame legalization for a number of problems, including drug traffickers that have taken advantage of lax marijuana laws to hide in plain sight, illegally growing and shipping the drug across state lines, where it can sell for much more.

Sure. That’s a problem. For the states where the marked-up sales are occurring, because it’s still illegal there. And where prohibition exists so does crime (duh) and violence.  My tiny violin for those Colorado law enforcement officials complaining is playing. The people you serve there already made this decision. Stop whining. You could do many things that are more productive, and might actually address the “problem” you’re noting. If we think this through, only one course of action is viable. Pot must be legalized in neighboring states. Bear with me here. If pot traffickers “hiding in plain sight” in states where pot is legal distribute their goods to neighbor states where it’s still illegal for jacked up prices are true problems:

So what’s the angle here? ANY item that is arbitrarily made legal or illegal will still flow following the same supply-demand relationship as any other good or service. I mentioned alcohol prohibition earlier. Did alcohol disappear during the prohibition? Hell no. It’s manufacture, distribution, and consumption went to the black market. Organized crime incorporated alcohol into their repertoire. And what makes our leaders believe re-enacting pot prohibition won’t produce exactly the same results it did last time? Drug gangs, violence between them, underground traffickers, black market sales. You know what, I don’t think that’s the reason for any of this.

“If Sessions thinks that makes sense in terms of prosecutorial priorities, he is in a very bizarre ideological state, or a deeply problematic one.”

How the War on Drugs Damages Black Social Mobility

Final thought, if George Carlin was still around today, I am struggling to imagine how damn well he’d be lambasting our government and more importantly the Trump administration. Warning, this is George Carlin. So he’s going to be very George Carlin-like.