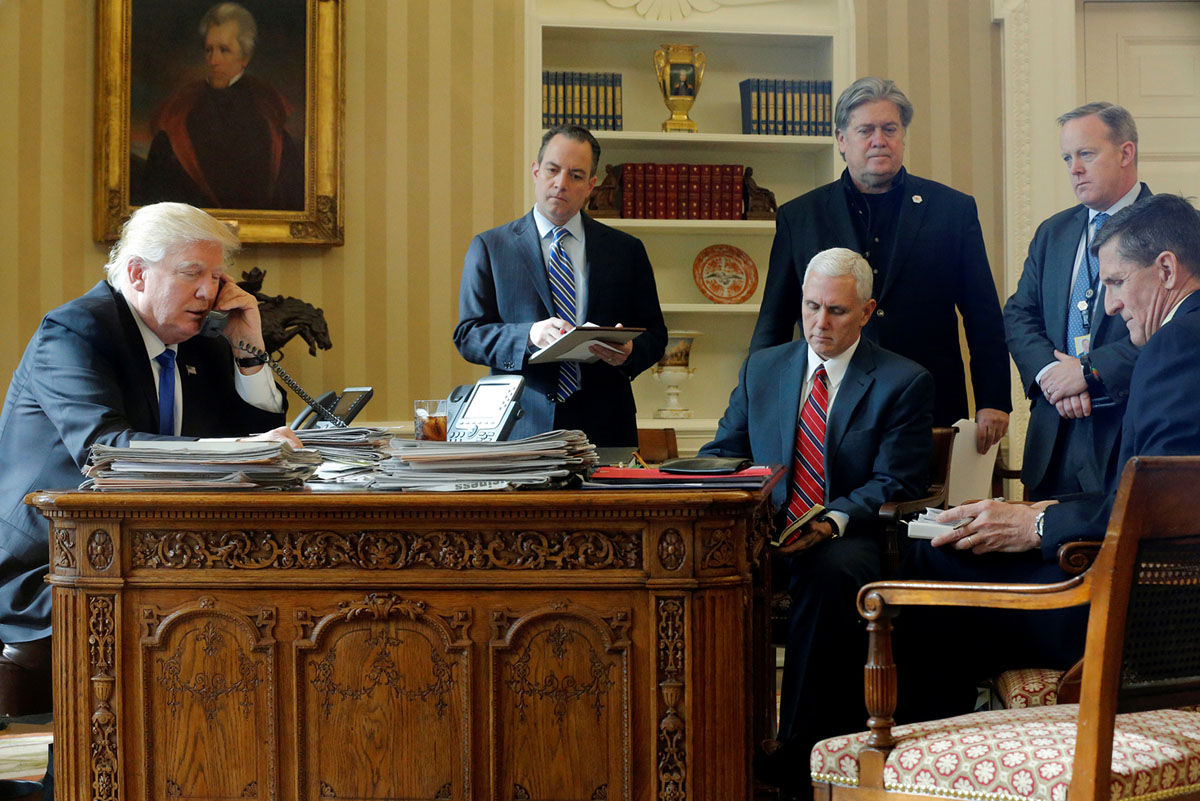 Foreign Policy: “The White House turned over records this fall to special counsel Robert Mueller revealing that in the very first days of the Trump presidency, Don McGahn researched federal law dealing both with lying to federal investigators and with violations of the Logan Act, a centuries-old federal law that prohibits private citizens from negotiating with foreign governments, according to three people with direct knowledge of the confidential government documents.”

“The records reflected concerns that McGahn, the White House counsel, had that Michael Flynn, then the president’s national security advisor, had possibly violated either one or both laws at the time, according to two of the sources. The disclosure that these records exist and that they are in the possession of the special counsel could bolster any potential obstruction of justice case against President Trump.”

“On the orders of Attorney General Jeff Sessions, Justice Department prosecutors have begun asking FBI agents to explain the evidence they found in a now dormant criminal investigation into a controversial uranium deal that critics have linked to Bill and Hillary Clinton,” multiple law enforcement officials told NBC News.

“Hillary Clinton has denied playing any role in the decision by the State Department to approve the sale, and the State Department official who approved it has said Clinton did not intervene in the matter. That hasn’t stopped some Republicans, including President Trump, from calling the arrangement corrupt — and urging that Clinton be investigated.”

Bannon says @RealDonaldTrump "has lost a step," is like "an 11-year old child" and probably won't finish his term. He's also weighing a run for President himself (perhaps Moore can return the favor and campaign for him) https://t.co/KpwaHUaoZP

“Speaker Paul Ryan and his top lieutenants plan to bring a short-term government funding bill to the House floor on Thursday despite internal resistance — in the hopes of averting a shutdown and then leaving town for the holidays,” Politico reports.

“GOP leaders are betting that their conference doesn’t want to trample on their tax victory by shuttering federal agencies. They plan to call up the bill, along with a separate $81 billion disaster package for hurricane relief. If the House passes the funding patch Thursday, the Senate will move on it as quickly as possible.”

Democratic leader Nancy Pelosi isn’t going to give House Speaker Paul Ryan any help in dealing with his squabbling children and making government work. She’s made it clear that he’s on his own in making his majority control of the whole government work and she’s whipping her Democratic conference to vote no on the continuing resolution.

The Trump Tax Cuts will make it easier for Democrats to expand the welfare state, not harder. https://t.co/DosfRRFfBD

Sen. Thad Cochran (R-MS), chairman of the powerful Appropriations Committee, “hasn’t presided over a hearing since early September. The Mississippi Republican has not given a speech on the Senate floor all year, and he’s introduced only two bills during that time, both of them minor,” Politico reports.

“The 80-year-old’s feeble performance has fueled expectations — among senators and aides who’ve witnessed his physical and mental decline firsthand — that Cochran will step down from the Appropriations chairmanship early next year, or resign from the Senate altogether.”

Said one GOP senator: “The understanding is that he will leave after Jan. 1, That’s what most of us believe will happen.”

Excellent.  I will look forward to welcome the new Democratic Senator from Mississippi.

As Nate Cohn notes, here are the generic congressional ballot results from polls conducted in this month using live interviewers (as opposed to an automated voice):

Patrick Murray: “Bookmark that photo of Republican lawmakers gathering at the White House today to celebrate their first major legislative victory of the Trump era. If history is any guide, many of them may be on their way out this time next year.”

“Importantly, fully half of the American public believes that their own federal taxes will increase because of this new tax reform package. Only 14% expect that their taxes will go down. In reality, many more than 1-in-7 taxpayers will see at least a nominal decrease. This reality is what GOP lawmakers are banking on when they face the voters next year.”

“But politics – and voters’ decision-making process – isn’t always based on reality. It is, however, always based on perception. And based on historical perception metrics, the short-term future doesn’t look quite so bright for the bill’s proponents.”

“Puerto Rico’s governor is warning that the sweeping tax plan passed by congressional Republicans on Wednesday could deliver a ‘crippling blow’ to the island’s already-fragile economy, still reeling from the effects of major hurricanes,” the Washington Post reports.

“The tax bill passed overwhelmingly in the House on Wednesday includes a new 12.5 percent tax on profits derived from intellectual property held by foreign companies — a move designed to compel those companies to move back to the United States. Puerto Rico is considered part of the United States in all realms except taxes — meaning that island residents don’t pay federal income taxes but do pay into Social Security. Companies based on the island are treated as if they were located in other Caribbean tax havens not under an American flag.”

House Democrats are preparing for possible impeachment of Donald Trump, should they regain the majority.

Good. That's exactly what they should be doing — right now.

Alabama’s secretary of state announced that his office had received 4,967 provisional ballots and that “no additional ballots are eligible to be received,” the Washington Examiner reports.  That figure is “well below the number needed to trigger a recount, let alone overcome the 20,715-vote lead of Doug Jones.”

McKay Coppins: “After months of quietly laying the groundwork for his own retirement, the 83-year-old Utah senator has signaled to Republican allies in recent weeks that he’s having second thoughts about leaving office when his term ends next year. Interviews with 10 people familiar with the situation—some of whom requested anonymity to speak candidly—suggest that President Trump’s efforts to convince Hatch to seek reelection have influenced the senator’s thinking.”

“This perceived about-face by the seven-term senator has enraged loyalists to Mitt Romney, who had been planning to run for Hatch’s seat (at the senator’s urging no, less). Meanwhile, many Utah Republicans have grown impatient and aggravated with Hatch as he repeatedly postpones announcing his reelection decision.”

The world just delivered a stinging rebuke to Trump over Jerusalem https://t.co/Xi1brsI1Md via @voxdotcom

President Trump “plans to sign the tax bill on Jan. 3 to ensure automatic spending cuts to Medicare and other programs don’t take effect,” Bloomberg reports.  “The White House informed House GOP members of the timetable, following the likely decision by House Republicans to leave the so-called PAYGO provision out of a year-end spending deal to avoid a government shut down before Friday.”

“Republicans want to channel momentum from the GOP’s victory on taxes into a push to overhaul the nation’s welfare programs, though some of President Donald Trump’s advisers prefer a less controversial infrastructure plan at the top of his agenda,” Bloomberg reports.  “House Speaker Paul Ryan regards 2018 as a chance to fulfill the ambitions he brought to Congress 20 years ago: reshaping the social safety net for the poor and disabled, as well as programs including food stamps and Medicaid.”

But, Senate Majority Leader Mitch McConnell (R-KY) crushed Ryan’s dream of making cuts to programs like Medicare, Medicaid, and Social Security in 2018 now that Congress has passed tax cuts.  McConnell said that the Senate would not be able to pass legislation making changes to those programs without support from Democrats, making it unlikely that his chamber would attempt to pass major legislation addressing those programs.

FiveThirtyEight: “The company, which processed 19.7 million American tax returns in 2016, exists because so many Americans would rather pay someone to do their taxes than perform all those calculations themselves. If filing were to become as easy as writing a postcard, then H&R Block stood to lose business. As Trump said when he met with Brady and Ryan: ‘The only people that aren’t going to like this is H&R Block. They’re not going to be very happy. That’s probably one of the only companies in the country that’s not going to be thrilled.’ The firm’s stock price dropped 2.6 percent that day to $23.86, the lowest since April 24.”

“Shareholders shouldn’t have panicked. H&R Block’s stock price has gained 14 percent since Nov. 2, as it became clear that postcard filing was more gimmick than revolution.”