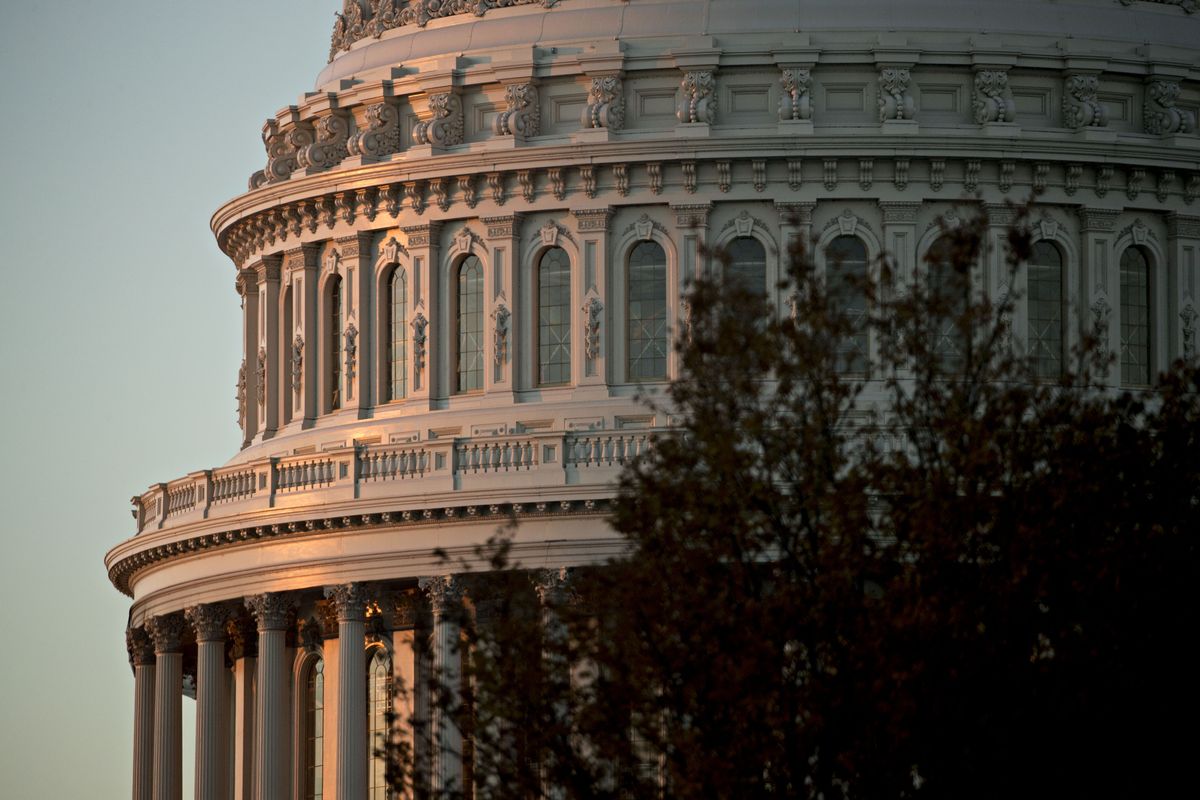 REPUBLICAN INCOMPETENCE FORCES SECOND VOTE. “House Republicans will need to pass their tax plan for a second time after the Senate parliamentarian ruled that provisions in the bill violated the rules governing the legislation,” The Hill reports.  A final vote is now expected today.  They are so incompetent that they can even vote right. The vote count in the first vote Tuesday afternoon was 227-203, with 12 Republicans voting with every Democrat in voting no.

DEMOCRATS GAIN TIE IN VIRGINIA HOUSE AFTER RECOUNT.  Washington Post: “A Republican seat flipped Democratic in a wild recount Tuesday – with the Democrat winning by a single vote – creating a rare 50-50 tie between the parties in the House of Delegates and refashioning the political landscape in Richmond.”

WATCH: Health care activist @AdyBarkan says Sen. Lindsey Graham "ran away" when he tried to confront him about the GOP tax bill.

"He doesn't have the heart to to look me in the eye and say 'yes, i am voting to cut your Medicare.'" pic.twitter.com/mHSyzney4k

DUPED SENATOR SAYS COVERAGE SAYING SHE WAS DUPED IS SEXIST.  Sen. Susan Collins (R-ME) blasted media coverage of her support for the GOP tax bill as “extremely discouraging” and “unbelievably sexist,” Politico reports.  Said Collins: “They’ve ignored everything that I’ve gotten and written story after story about how I’m duped. How am I duped when all your amendments get accepted?”   All you got was a letter from Mitch McConnell promising that which he cannot promise: that the House and Senate will agree to new healthcare legislation.  LOL. You unmitigated dupe.  You preposterous fool.

To wit: according to TPM, a host of House Republicans have told reporters that the promises made to secure the vote of Sen. Susan Collins (R-ME) have no chance of passing the lower chamber and becoming law.  Ma’am, you got duped, and it is not sexist to say so.

Former Director of National Intelligence James Clapper: Vladimir Putin "knows how to handle an asset and that's what he's doing with the President" https://t.co/KxXPcUNuSA pic.twitter.com/CXYiFBCHam

Former Director of National Intelligence James Clapper told CNN that Russian President Vladimir Putin appears to be handling President Trump like “an asset.”  Said Clapper: “I think this past weekend is illustrative of what a great case officer Vladimir Putin is. He knows how to handle an asset, and that’s what he’s doing with the president,” clarifying that he means this “figuratively.”  He added: “You have to remember Putin’s background. He’s a KGB officer, that’s what they do. They recruit assets. And I think some of that experience and instincts of Putin has come into play here in his managing of a pretty important account for him, if I could use that term, with our president.”

SHUTDOWN COMING ON FRIDAY. Speaker Paul Ryan “plans to pass a continuing resolution later this week to fund the government until Jan. 19, but there are major disagreements within the House GOP over the move. There are also disputes between House and Senate Republicans, as well as the ever-present struggle with Democrats,” Politico reports.

“Right now, no one on either side of the Capitol has any clear idea how this three-way funding fight will play out, but all the major factions are digging in. Lawmakers and aides said the House and Senate could end up ‘ping-ponging‘ a spending bill back and forth until the issues are resolved, although some worry that Congress could blunder into a shutdown. Ryan on Tuesday instructed lawmakers not to leave town, signaling how concerned leadership is about the Friday funding deadline.”

"The tax bill is a scam": Fox cuts away after correspondent Peter Doocy gets interrupted by a protester during a live shot pic.twitter.com/OgEie4En8q

The most shocking thing about this clip is that contemptible Fox & Friends host Steve Doocy procreated.

In addition, the survey finds that Democrats have overtaken Republicans on which party better handles the economy.

A new CNN poll finds opposition to the Republican tax bill has grown 10 points since early November, and 55% now oppose it. Just 33% say they favor the GOP’s proposal.  Meanwhile, President Trump’s approval rating has fallen to 35%, his worst mark yet in CNN polling.

GOP’S CHRISTMAS GIFT TO DEMOCRATS: AN ECONOMIC MESSAGE. First Read: “One of the common refrains after their defeat in 2016 has been: What’s the Democrats’ economic message? Well, this bill gives it to them on a silver platter.”

“Democrats, in 2018 and 2020, will likely campaign on putting the middle class before the wealthy and corporations (under this bill, the corporate tax cuts are permanent, while the ones for individuals are temporary). They will blame health care premium increases on the repeal of the individual mandate. And above all, they will say that Donald Trump doesn’t deserve a tax break, which he gets under the legislation.”

And it takes away the GOP’s credibility on the federal debt: “Well, this tax legislation has a price tag of about $1.5 trillion, and it isn’t fully paid for (even when you factor in assumed economic growth under the most favorable of analyses).”

“The top congressional committee investigating Russian interference in the 2016 presidential election has set its sights on the Green Party and its nominee, Jill Stein,” BuzzFeed News reports.  “Dennis Trainor Jr., who worked for the Stein campaign from January to August of 2015, says Stein contacted him on Friday saying the Senate Intelligence Committee had requested that the campaign comply with a document search.”

Many disgusting Sarandon-style leftists more than happily parroted the Russian-Trump line on Hillary.  I will gladly accept the indictment and imprisonment of Stein as a measure of contrition on their behalf.

DEMOCRATS HAVE A NEW SOUTHERN STRATEGY. Ron Brownstein: “Jones’ victory was centered on minorities, millennial voters and college-educated suburban whites, especially women. That’s exactly the formula Democrats now depend on in most states. But even with strong African-American support, Southern Democrats until recently come up short, largely because they haven’t attracted nearly as many college-educated whites as their party does elsewhere.”

“Now, with Democratic constituencies energized and suburban swing voters uneasy about Trump, Southern Democrats are suddenly finding it more possibe to assemble the coalition that the party relies on in other regions. And that could create new opportunities for Democrats across the South, most immediately in suburban House districts in 2018, but potentially also in statewide contests such as the 2018 governor’s race in Georgia and Senate battle in Tennessee.”

CONSERVATISM WON’T SURVIVE TRUMP.  David Frum: “Conservatism is what conservatives think, say, and do. As conservatives change—as much through the harsh fact of death and birth as by the fluctuations of opinion—so does what it mean to be a conservative.”

“The Trump presidency is a huge political fact. He may not be the leader of American conservatism, but he is its most spectacular and vulnerable asset. The project of defending him against his coming political travails—or at least of assailing those who doubt and oppose him—is already changing what it means to be a conservative. The word “conservative” will of course continue in use. But its meaning is being rewritten day by day by the actions of those who claim the word. It is their commitment to Trump that etches Trumpism into them. And while Trump may indeed pass, that self-etching will not soon be effaced.”

The international incidents sparked by Trump's twitter feed in 2017, as curated by @kcalamur: https://t.co/zPRytUeszD pic.twitter.com/065AXqQ15l

THANKS OBAMA!  A new Quinnipiac poll finds that 63% of American voters say the nation’s economy is “excellent” or “good,” while 34% say it is “not so good” or “poor.”  More think President Obama is mostly responsible for the state of the economy, 45% of voters, than President Trump, 43% of voters. In fact, voters disapprove 51% to 44% of the way Trump is handling the economy.

What to call this tax bill? @joshtpm suggests "The Big Heist." https://t.co/wtxgYoOFBw

Sally Yates: “We are not living in ordinary times, and it is not enough for us to admire our nation’s core values from afar. Our country’s history is littered with individuals and factions who have tried to exploit our imperfections, but it is more powerfully marked by those whose vigilance toward a more perfect union has prevailed.”

“So stand up. Speak out. Our country needs all of us to raise our collective voices in support of our democratic ideals and institutions. That is what we stand for. That is who we are. And with a shared commitment to our founding principles, that is who we will remain.”

First Read: “During the ’16 campaign, as well as in his first months in office, Trump called for raising taxes on the wealthy; he talked about giving power back to the people; and he promised that he wouldn’t benefit under the tax bill.”

“In fact, while most Americans would get a tax break in the legislation’s first year, more than 80 percent of the bill’s benefits would go to the Top 1 percent of taxpayers by 2027, according to the nonpartisan Tax Policy Center. And yes, the legislation’s provision to allow the super-wealthy to pass up to $22 million tax-free to their heirs (up from the current $11 million) would benefit Trump and his family.”

“Ask yourself: Does this legislation help or hurt Trump in Michigan, Pennsylvania and Wisconsin?”