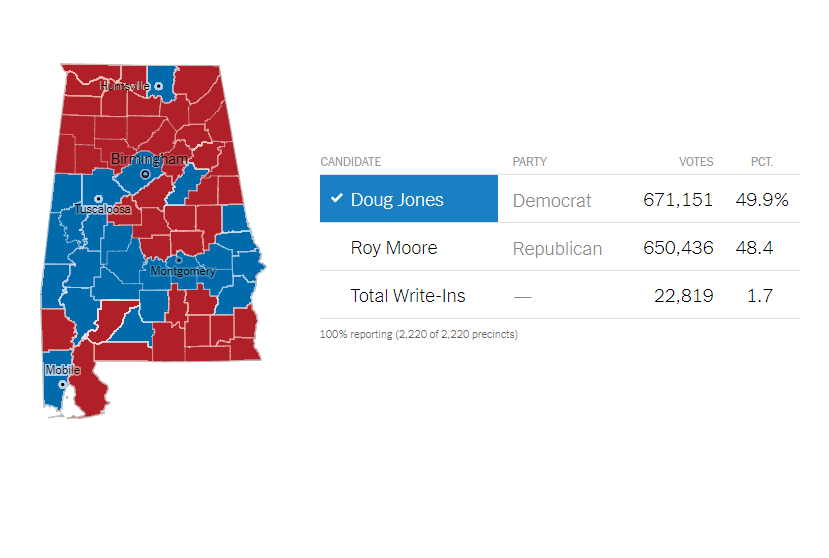 Doug Jones (D) has defeated Roy Moore (R) in Alabama’s special election U.S. Senate race.  The defeat is a massive blow to President Trump and costs Republicans what should have been a safe seat in a deep-red state.    The Senate Leadership Fund issued this statement: “This is a brutal reminder that candidate quality matters regardless of where you are running. Not only did Steve Bannon cost us a critical Senate seat in one of the most Republican states in the country, but he also dragged the President of the United States into his fiasco.”

President Trump congratulated Doug Jones (D) in a tweet for his Senate victory in Alabama: “Congratulations to Doug Jones on a hard fought victory. The write-in votes played a very big factor, but a win is a win. The people of Alabama are great, and the Republicans will have another shot at this seat in a very short period of time. It never ends!”

We’ll see how long this conciliatory (yet still excusatory (not really a word, but I like it)) Trump lasts.

Dan Balz: “Trump suffered mightily after fully embracing Moore in the final weeks of the campaign, despite credible allegations that Moore had engaged in sexually improper behavior with teenage girls when he was in his 30s.”

“It was the second such setback for the president in a state he won by 28 points just a year ago. In the GOP primary earlier this year, he had endorsed, with limited enthusiasm, Sen. Luther Strange, who had taken the seat of Jeff Sessions when Trump made Sessions his attorney general. For Trump, nothing good has come from that appointment — from a special counsel investigation into Russia’s role in the 2016 election to a pair of losses in the Alabama races.”

A new USA Today editorial:  “With his latest tweet, clearly implying that a United States senator would trade sexual favors for campaign cash, President Trump has shown he is not fit for office. Rock bottom is no impediment for a president who can always find room for a new low. A president who would all but call Sen. Kirsten Gillibrand a whore is not fit to clean the toilets in the Barack Obama Presidential Library or to shine the shoes of George W. Bush.”

You should read this editorial from @USATODAY https://t.co/BRmLDrba49

Washington Post: “Speaking to supporters at about 11:34 p.m. Eastern time, Moore said he thought the race might go to a recount, which state law requires when a race is within 0.5 percentage points.”  Said Moore: “When the vote is this close . . . it’s not over.”  “Jones’ lead, at that point, however, still exceeded 0.5 percent.”  It’s at 1.5%.  And may still grow as more provisional ballots come in (you know, provisional ballots filled out by the African Americans Alabama tried to disenfranchise).

Sore loser Roy Moore.   There is a phrase that applies to you and the horse you horribly rode in on (any equestrian worth their salt winced at Moore’s riding ability and style).

CNN: “The earliest the state could certify a winner would be December 26, but the secretary of state’s office does not expect the canvassing board to be able to do so until January 3, and it could be even later, delayed by slow canvassing by the counties and jam-packed holiday schedules between Christmas and New Year’s Day. Once it does, that certification would be sent to Washington immediately. Once the winner is certified, the Senate would likely in swear that person quickly.”

Scott Brown was sworn in 16 days after the 2010 special election. But no major votes occurred in that period. “We’re going to wait until the new senator arrives until we do anything more on health care," Harry Reid said the day after Brown was elected.

ATTENTION @SenateDems. SHUT DOWN THE SENATE UNTIL DOUG JONES IS SEATED. NO VOTES WHATSOEVER.

Matt Yglesias says Republicans lost because they are toxically unpopular, even in Alabama: “The easy thing for Republicans to tell themselves after the stinging loss of a Senate seat in Alabama is that they only went down to defeat because the party had the misfortune to nominate someone accused of preying on teenage girls. […] The larger issue is that the Republican Party is led by an unpopular president and unpopular congressional leaders who are pursuing an unpopular agenda, and it’s putting them in massive electoral peril.

It is entirely normal for the party that occupies the White House to lose ground down ballot during midterm elections. That said, the GOP’s results in 2017 have really been quite bad:

Republicans in Washington are aware of all these facts, but seem, strangely, a bit indifferent to them. The experience of watching Trump — whom they all expected to lose as late as 7 o’clock on the evening of the 2016 election — triumphing against the odds has them dazzled. And the fact that in office, Trump, despite considerable speculation that he wouldn’t, has pursued a very orthodox Republican Party agenda has them pleased.”

Source close to WH: "It's devastating for the president… this is an earthquake… Virginia but on steroids… the president has egg on his face" because of Bannon.

Dylan Matthews says Mitch McConnell is a big loser in last night’s results: “McConnell is in an unenviable position. He put his character on the line by failing to forcefully condemn Moore in the campaign’s final days, and it didn’t pay off. Now he has a weakened Senate majority, which could make confirming Trump’s judicial and executive appointees, and achieving favorable spending deals with Democrats, rather difficult. It could even endanger tax reform if Republicans’ plan to rush a bill through next week (before Jones takes office) doesn’t work out.  He’s one seat closer to losing the Senate, and he’s lost another chunk of his dignity in the process.”

Politico: “All the chatter across Alabama for the final week of the race focused on Democrats’ alleged problems turning out black voters. But after a blockbuster turnout operation designed by Jones’ campaign and national Democrats, African-American voters turned out in massive numbers for the former U.S. attorney.”

“His sweeping victories across the state’s so-called ‘Black Belt’ rivaled only his massive victories in the state’s largely African-American cities, like Birmingham and Montgomery. Relying on help from local surrogates like Rep. Terri Sewell and Birmingham mayor-elect Randall Woodfin, Jones relentlessly campaigned in those zones.”

“The result swept aside weeks of hand-wringing here and pointed to an optimistic future for a party that wasn’t sure it would be able to bring black voters to the polls in sufficient numbers without Barack Obama atop the ticket.”

Attention Democrats and purist Bernie-loving progressives: African Americans are the only reason you ever win elections.  You either speak to their issues and get their vote or you die.  So no, we will not be dropping social justice, civil rights and equality fights so we can attract the racist white worker who voted for Trump.  Instead, we get more organized and efficient at turning out the black vote and the millennials and whites and women that agree with us.

New York Times: “Voters in Alabama’s cities and most affluent suburbs overwhelmingly rejected Mr. Moore’s candidacy, an ominous sign for Republicans on the ballot next year in upscale districts. In Jefferson County, which includes Birmingham and some of the state’s wealthiest enclaves, Mr. Jones, the Democratic candidate, captured more than 68% of the vote. And in Madison County, home to Huntsville and a large NASA facility, Mr. Jones won 57 percent of the vote.”

“While these Alabamians, many of them women, may have been appalled by the claims of sexual misconduct against Mr. Moore, results like these were not isolated to this race. They mirrored returns in last month’s statewide and legislative races in Virginia, a state filled with well-heeled suburbanites.”

.@kevindliles took these portraits of Alabama voters, who explained their votes to him on Tuesday: https://t.co/9Jg3CjbcvD pic.twitter.com/Y6uEUZbbF9

Jonathan Chait: “Roy Moore is Donald Trump, but moreso. He is a buffoon, a racist authoritarian demagogue, a sexual predator. In all these qualities, save buffoonery, he exceeds Trump. His defeat in one of America’s reddest states signals deep trouble for the party that has given rise to both men.

Moore was indeed burdened with a unique political liability – a longstanding taste for underage girls – without which he would have been elected to the Senate. But Moore’s sexual history did not hurt him too much, because – as Moore and Donald trump have demonstrated – no personal failing can hurt a Republican nominee too much. The conservative media infrastructure creates an alternative information universe, in which any failing can be denied or whatabout-ed away. A large chunk of the party base stuck with Moore and believed him.”

And yet, Moore still lost.  And so will Trump:  “Almost every sign points to a Democratic wave election. Presidents almost always face midterm course corrections, but Trump’s dismal political standing, in the rapid time frame it has occurred, lacks any parallel. He lost the trust of the country before he even took office, and has continued to sink.”

Give Doug Jones a vote on the tax bill. https://t.co/qjc7DNuUrv