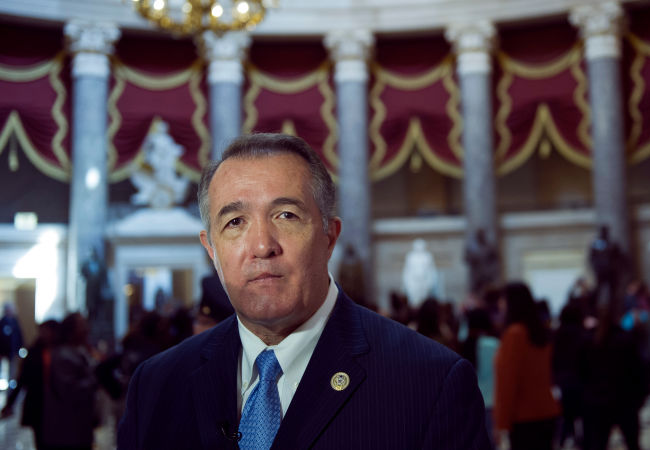 Rep. Trent Franks (R-AZ) issued a statement saying he would resign immediately, instead of staying on until January 31, 2018 as he said yesterday.  Politico has the background story: “Franks allegedly made unwanted advances toward female staffers in his office and retaliated against one who rebuffed him.”

“The sources said Franks approached two female staffers about acting as a potential surrogate for him and his wife, who has struggled with fertility issues for years. But the aides were concerned that Franks was asking to have sexual relations with them. It was not clear to the women whether he was asking about impregnating the women through sexual intercourse or in vitro fertilization. Franks opposes abortion rights as well as procedures that discard embryos.”

The AP reports Franks offered one staffer $5 million to act as a surrogate.

Roy Moore thinks America was greatest during slavery: “Our families were strong and our country had a direction.”

What direction is a nation headed when families are ripped apart, women are routinely raped & bodies viciously tortured and mutilated. https://t.co/zSTJGAbdTY

CHRISTMAS SHUTDOWN FIGHT LOOMS.  Playbook: “While House Democrats have toiled away in the minority, when it comes to government funding fights they have always been relevant because House Republicans haven’t been able to secure enough votes to pass stop-gap funding bills. That changed yesterday. Republicans stood together and passed the two-week bill without the help of Democrats.”

“Will it last? Doubtful. Conservative Republicans aren’t eager to vote for whatever funding bill comes next — they’re already freaking out about the budget cap deal. They will put up more of a fight when it comes to a massive package to keep government funded through 2018.”

Unprincipled Republicans may not hold Trump accountable. We must elect a Congress that will. https://t.co/KSFIKj0vxY

BELTWAY TRAFFIC IS NOT THAT BAD, ZINKE.   Interior Secretary Ryan Zinke “spent more than $14,000 on government helicopters this summer to take himself and staff to and from official events near Washington, D.C., in order to accommodate his attendance at a swearing-in ceremony for his replacement in Congress and a horseback ride with Vice President Mike Pence,” Politico reports.

DEMOCRATIC UNITY COMMISSION RECOMMENDATIONS.  “A Democratic Party working group will meet in Washington, D.C. today and tomorrow to finalize a formal list of recommended reforms for the party,” ABC News reports.  “Sources close to the commission who have seen working drafts of its current report tell ABC News the panel plans to recommend dramatic cuts to the individual voting power of superdelegates and new rules around caucuses and primaries to improve access for voters and recordkeeping.”

COLLINS GOT CONNED.  DOES SHE HAVE ANY SELF RESPECT LEFT TO VOTE NO? Sen. Susan Collins (R-ME) “is barreling toward yet another health care showdown with her own party. But this time, she might not have the leverage to get what she wants,” Politico reports. “Republicans who watched Collins lead the rebellion over the GOP’s Obamacare repeal effort just three months ago are playing tough on yet another high-stakes bill, wagering they can do without the Maine moderate’s swing vote and still claim a narrow year-end legislative win on tax reform.”

Sen. Susan Collins (R-ME) wouldn’t say whether she’ll support the final tax package in the absence of guaranteed passage of the health-care bills, Bloomberg reports.  “Collins’s promise came from Senate Majority Mitch McConnell — who can’t always deliver a vote in his own chamber, let alone the one across the capitol. It’s by no means clear that either of the health care bills Collins bargained for will get anywhere in the House, where conservatives regard at least one of the measures with disdain.”

Said Democratic lobbyist Jim Manley: “She got rolled. Despite the fact that she’s a veteran legislator, as far as I’m concerned she got rolled here. The promises she extracted from the Senate leadership aren’t worth the piece of paper they’re written on.”

THE LATEST ON ALABAMA: Kira Lerner reports at ThinkProgress that “The GOP for Doug Jones movement is real: Alabama Republicans are doing something they never thought possible: Voting for a Democrat.” Lerner notes that there is a “Republicans for Doug Jones” Facebook page with 2000 members.

“Jones will also need solid turnout among African-American voters to have any chance of winning,” writes Geoffrey Skelley at Sabato’s Crystal Ball. “If black voters make up about 25% of the electorate and Jones wins at least 90% of them, that would mean that Jones would probably have to win at least one-third of the white vote to have a chance of winning, assuming a small portion of the white vote goes for a write-in choice and accounting for a small percentage of other nonwhite voters who are Democratic-leaning. The most recent available exit poll in Alabama is from 2012, which found that Barack Obama won just 15% of the white vote. In 2008, the exit poll found Obama just won 10%, and in 2004, it found John Kerry won about 20%. Even when accounting for the potential error in such findings, it’s clear that it’s been a while since a Democrat won anywhere near one-third of the white vote in Alabama.”

Shutting down the government over DACA is a risky bet for Democrats. https://t.co/oxQIkqMJca pic.twitter.com/AqLJErmxLD

THE PARTY OF PREDATORS.  Frank Rich: “The Party of Lincoln is now the Party of Predators. Maybe it always was: Do recall the histories of such GOP congressional leaders as Denny Hastert and Mark Foley. It should also be noted that a tolerance for sexual predation may be well on its way to becoming a majority plank among the GOP rank and file. While a new Quinnipiac poll finds that 77 percent of Democrats believe elected officials should resign in the face of multiple sexual harassment accusations, only 51 percent of Republicans do.

Moore has the wholehearted support of the Republican president, and if he is elected on Tuesday in Alabama (the likely outcome, I’d guess), the Senate will seat him no matter the posturing to the contrary. Among Republican elites, the only naysayers to Trump are either out of power (Mitt Romney) or not likely to face another election. In that latter category, even John McCain violated his professed principles about deficits and a “regular” legislative process to sign on to the tax bill that extravagantly rewards Republican donors. He and his colleagues will shed crocodile tears about the new sexual miscreant in the Senate chamber all the way to the bank.”

“The president’s legal team has largely stayed quiet on the issue. But with Mr. Mueller’s investigation appearing to edge closer to Mr. Trump’s family and inner circle, the president is being urged to drop the mostly cooperative approach taken to date.”

Jonathan Chait: “Yes, “some conspiratorial quid pro quo between somebody in the Trump campaign and somebody representing Vladimir Putin” is “possible,” allowed Wall Street Journal columnist Holman Jenkins, but “we would be stupid not to understand that other countries have a stake in the outcome of our elections and, by omission or commission, try to advance their interests. This is reality.” The notion of a criminal conspiracy by a hostile nation to intervene in the election in return for pliant foreign policy has gone from unthinkable to blasé, an offense only to naïve bourgeois morality.

It is almost a maxim of the Trump era that the bounds of the unthinkable continuously shrink.”

Al Franken is gone. Roy Moore will likely be a U.S. Senator.

Because one party is changing with the culture on this issue, and the other isn't.

Washington Post: “Before Ronna Romney McDaniel took over as Republican National Committee chairwoman earlier this year, President Trump had a request: Would she be willing to stop using her middle name publicly? Though she had used her maiden name for years in Michigan, where her grandfather had been governor, McDaniel dropped ‘Romney’ from most official party communications and has rarely used it since.”

“The moment offers a window on Trump’s complicated and often tense relationship with Mitt Romney.”

“Those tensions were on display again this week, when White House aides scripted a trip to Utah with a single political goal in mind: to convince Sen. Orrin Hatch (R-UT) to run for reelection and thwart Romney from mounting his own bid for the seat, according to a senior White House official involved in the preparations.”

Video: Roy Moore: Putin may be right, America is the focus of modern evil in the world. pic.twitter.com/fOUZfygEgm

Marc Fisher tells the story of how this racist Trump presidency has affected African Americans in Mississippi.

“It’s hostile now, more hostile than in a long, long time,” said Pete McElroy, who employs three men at the auto repair shop that has been his family’s business for three generations. “People almost boast about it: ‘We got our man in the White House, and this is the way the ball’s going to roll now.’ ”…

Two miles away from the museum, as Priscilla Sterling recalled, a tense white man cornered her daughter on a street in Jackson. “Would you ever date a skinhead?” he asked, and it’s 2017 and she doesn’t know what she can say.

“White men following me, intimidating my daughter — this is the craziest time I’ve ever seen,” said Sterling, 49, a Jackson resident and a cousin of Emmett Till, the 14-year-old black boy who was lynched in Mississippi in 1955 after a white woman accused him of flirting with her at her family’s grocery store.

“I used to say I could never have lived in the 1950s or ’60s, that I couldn’t have taken the pressure,” Sterling said. “Now it’s 2017 and I’ve had people follow me and threaten me with vitriol. It’s vitriol like I never heard before Trump.”

A horrific video released on Thursday shows an Arizona cop killing an unarmed man who begged for his life in a hotel hallway in 2016 https://t.co/CK0gUsjnGL

Walter Shapiro: “The combination of GOP congressional majorities, a supine Republican Party and a truculent right-wing media culture have conspired to convince many liberals that Trump and all that he represents are indeed unbeatable.

This continuing sense of political impotence by liberals has placed undue weight on the Mueller investigation. Every indictment, guilty plea and rumor has been measured against Watergate and the need to discover impeachable offenses. Simply proving a pattern of corruption around Trump and a cavalier attitude to Russian meddling in the 2016 election won’t seem sufficient. Somehow the whole enterprise will be judged a failure if the investigation fails to prevent Trump from serving out his term in the White House.

But such a Mueller-centric worldview is shortsighted…

Trump may seem like a magician with his frenzied attempts at political distraction. But voters in the cheap seats remain unconvinced by the card tricks, especially since the marked decks keep spilling onto the floor. That’s why political remedies may ultimately prove more effective in taming Trump than Robert Mueller.”