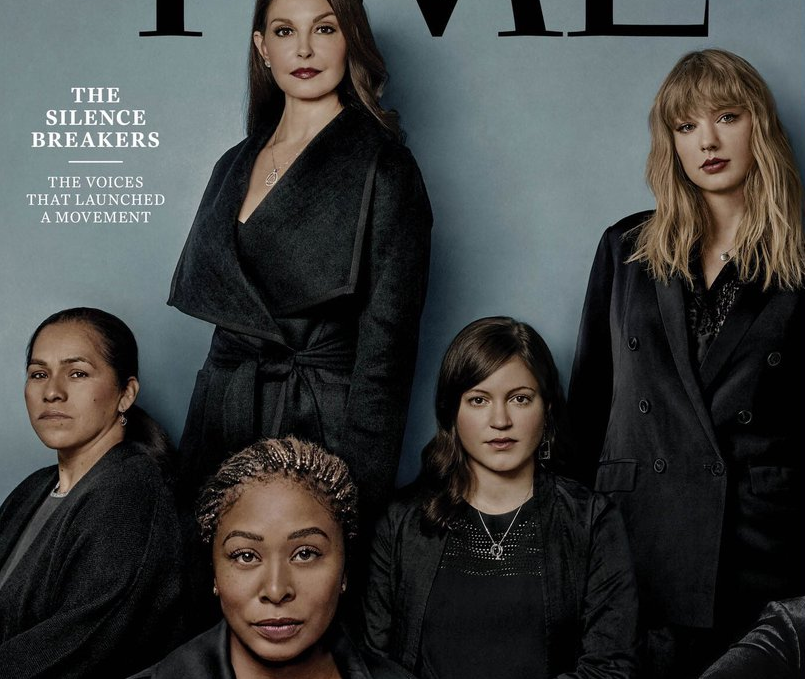 Time magazine has named “The Silence Breakers,” representing people who came forward to report sexual misconduct, as its Person of the Year. It’s a recognition of the cultural reckoning this year and the #MeToo movement, which represents the people, mostly women, who have fueled a worldwide discussion about sexual harassment and assault.

“This reckoning appears to have sprung up overnight. But it has actually been simmering for years, decades, centuries,” Time’s story said. “These silence breakers have started a revolution of refusal, gathering strength by the day, and in the past two months alone, their collective anger has spurred immediate and shocking results: nearly every day, CEOs have been fired, moguls toppled, icons disgraced. In some cases, criminal charges have been brought.”

I think this is a good choice, though I would have changed the title to “People of the Year.”   A minor quibble.   Thankfully, the choice was not Trump, though he came in 2nd place and Chinese President Xi Jinping came in third.

Sam Baker: “Just a few weeks ago, the Affordable Care Act stabilization bill from Sens. Lamar Alexander and Patty Murray looked like a common-sense fix with a decent shot at finding its way into Congress’ big end-of-the-year package. But that was before Republicans were on the cusp of repealing the individual mandate. Now the bill’s constituency is eroding — on every front.”

“Democrats liked Alexander-Murray on its own, but Sen. Susan Collins is now framing the bill as a trade-off to help her support repealing the law’s individual mandate, and Democrats can’t go for that deal.”

“Many Republicans never supported Alexander-Murray. The Wall Street Journal reports that it won’t be attached to the two-week spending bill Congress takes up this week, and that House Speaker Paul Ryan was never part of any agreement to pass the bill to help get Collins on board with Republicans’ tax overhaul.”

Playbook: “The government shuts down on Friday. Meadows — the leader of a bloc of more than 30 conservatives — says he does not like the GOP leadership plan. Democrats have no intent to help Republican leaders pass a stop gap measure. And the first serious talks between principals — Democratic and Republican leaders and President Donald Trump — is Thursday, the day before the funding deadline.”

McClatchy: “The GOP’s controversial dual effort to revamp the health care system and tax code has convinced Democrats they should bluntly assail Republicans as the defenders of out-of-touch plutocrats, a message party operatives have already begun to poll-test, include in attacks ads, and use against vulnerable incumbents even before Saturday’s passage of the Senate GOP bill.”

“And rather than wince at the inevitable retorts that the party is trying to instigate a class war, leading party strategists say they welcome the attack — confident the GOP’s legislative priorities make them a more likely culprit in the public’s mind.”

Said one party operative: “If we’re eating the rich, they bit first.”

“The RNC’s renewed support for Roy Moore comes with a peculiar caveat: No one at the RNC is actually defending the decision publicly,” BuzzFeed News reports.

“On Tuesday — as the national party took a beating for the decision — including from many fellow Republicans, the RNC remained silent. Several RNC committee members acknowledged frustrations but would not speak on the record. Senior party leaders punted questions to spokespersons who declined to comment.”

You’re retiring.  You could have maxed out at least.   And who writes a check?  Donate online so that they have the money now, not in a week.  But whatever, symbolism.

New York Times: “After a frenzy of congressional action to rewrite the tax code, salesclerks and chief executives are calculating their gains. Business was treated with the everyone’s-a-winner approach that ensures no summer camper goes home without a trophy.”

“Some got special prizes. Cruise lines, craft beer and wine producers (even foreign ones), car dealers, private equity, and oil and gas pipeline managers did particularly well. And perhaps the biggest winner is the industry where President Trump and his son-in-law, Jared Kushner, made their millions: commercial real estate.”

Politico: “Republicans’ tax-rewrite plans are riddled with bugs, loopholes and other potential problems that could plague lawmakers long after their legislation is signed into law. Some of the provisions could be easily gamed, tax lawyers say. Their plans to cut taxes on ‘pass-through’ businesses in particular could open broad avenues for tax avoidance.”

“Others would have unintended results, like a last-minute decision by the Senate to keep the alternative minimum tax, which was designed to make sure wealthy people and corporations don’t escape taxes altogether. For many businesses, that would nullify the value of a hugely popular break for research and development expenses. Some provisions are so vaguely written they leave experts scratching their heads, like a proposal to begin taxing the investment earnings of rich private universities’ endowments.”

Russia has been banned from the 2018 Olympics as a result of 'the systemic manipulation of the anti-doping rules' https://t.co/vgZbLsMOg5

Good. Ban Russia from everything. Fully isolate and sanction them to death.

Following the release of the Access Hollywood tape last year, Vice President Mike Pence made it clear to the RNC he was ready to take Trump’s place as the presidential nominee, The Atlantic reports.

“The furtive plotting, several sources told me, was not just an act of political opportunism for Pence. He was genuinely shocked by the Access Hollywood tape. In the short time they’d known each other, Trump had made an effort to convince Pence that—beneath all the made-for-TV bluster and bravado—he was a good-hearted man with faith in God. On the night of the vice-presidential debate, for example, Trump had left a voicemail letting Pence know that he’d just said a prayer for him. The couple was appalled by the video, however. Karen in particular was ‘disgusted,’ says a former campaign aide. ‘She finds him reprehensible—just totally vile.’”

“The Trump administration is considering a set of proposals developed by Blackwater founder Erik Prince and a retired CIA officer — with assistance from Oliver North, a key figure in the Iran-Contra scandal — to provide CIA Director Mike Pompeo and the White House with a global, private spy network that would circumvent official U.S. intelligence agencies,” The Intercept reports.

“The sources say the plans have been pitched to the White House as a means of countering ‘deep state’ enemies in the intelligence community seeking to undermine Trump’s presidency.”

Said one former intelligence official: “Pompeo can’t trust the CIA bureaucracy, so we need to create this thing that reports just directly to him,”

Federal prosecutors asserted that a longtime associate of Paul Manafort, the former chairman of President Trump’s campaign, has been “assessed to have ties” to Russian intelligence — the first time the special counsel has alleged a Trump official had such contacts, the Washington Post reports.

Meanwhile, “Robert Mueller may not be through with Rick Gates, a deputy Trump campaign aide and one of the four people who have been charged as part of the special counsel probe into Russian meddling in the 2016 election,” CNN reports.

“In a court appearance Monday in Manhattan, Gates’ attorney Walter Mack said that federal prosecutors have told him that more charges, called superseding indictments, may be coming.”

Trump is a weak president — struggling to set the agenda, confused by his own bureaucracy, deeply unpopular. But weak presidents can be dangerous leaders. https://t.co/zO72xsJR34

New York Times: “As the party prepares for a midterm election that could bring a fierce backlash against a historically unpopular president, Republicans are growing more alarmed that a difficult race could be made worse without some semblance of planning to avert more discord.”

“Some top party officials say they are worried that the political environment may prove punishing enough to cost Republicans control of the House.”

“But an organization that can fend off such a landslide does not appear in the offing. In a departure from every modern White House, Mr. Trump himself largely dictates whom to back and how to support his preferred candidates.”

Washington Post: “Since the spring, House Republicans have lived through a relatively calm seven months, a period lacking the drama and infighting that have come to define their majority.”

“That came to an abrupt end Monday night, when members of the Freedom Caucus tried to grind progress on tax legislation to a halt.”

“These hard-right conservatives had no quarrel with the tax plan — they almost all voted for it — but they were looking for a hostage to grab and knew that this one would get everyone’s attention. Their real target is the 2018 spending bill for federal agencies, along with a clutch of other must-pass items that conservatives oppose.”

John Cassidy: “Even if the Republican conferees can reach an agreement on these provisions, there are two explosive non-tax issues that need to be resolved: the fate of the individual mandate to purchase health insurance, and the legal protections afforded to people who were brought to this country as undocumented immigrants when they were children—the “Dreamers.” Senate Republican leaders, in their drive to get to fifty-one votes, made pledges regarding these issues to two key senators: Susan Collins, of Maine, who helped defeat the G.O.P. effort to repeal Obamacare; and Jeff Flake, of Arizona, who is a fierce critic of President Trump.”

“At this stage, it is by no means clear that the G.O.P. leaders will be able to deliver on the pledges they made to Collins and Flake, which are already coming under fire from some ultra-conservatives in the House… Getting the members of the Freedom Caucus and the likes of Collins and Flake to agree on anything won’t be easy, and, for procedural reasons, the members of the conference committee won’t have much freedom to maneuver.”

Important: Speaker Paul Ryan’s (R-WI) office said that Ryan “is not part of a deal to get Obamacare fixes passed before the end of the year,” according to The Hill.

Rep. John Conyers Jr. (D-MI) “retired Tuesday after facing multiple allegations that he had sexually harassed female aides,” the Washington Post reports.  From a hospital in Detroit, the 88-year-old congressman said he was “retiring today” and endorsing his son to replace him in Congress.

Good.  First, anyone who is 88 shouldn’t be in government, groper or not.   I say set a mandatory retirement age between 80 and 85.