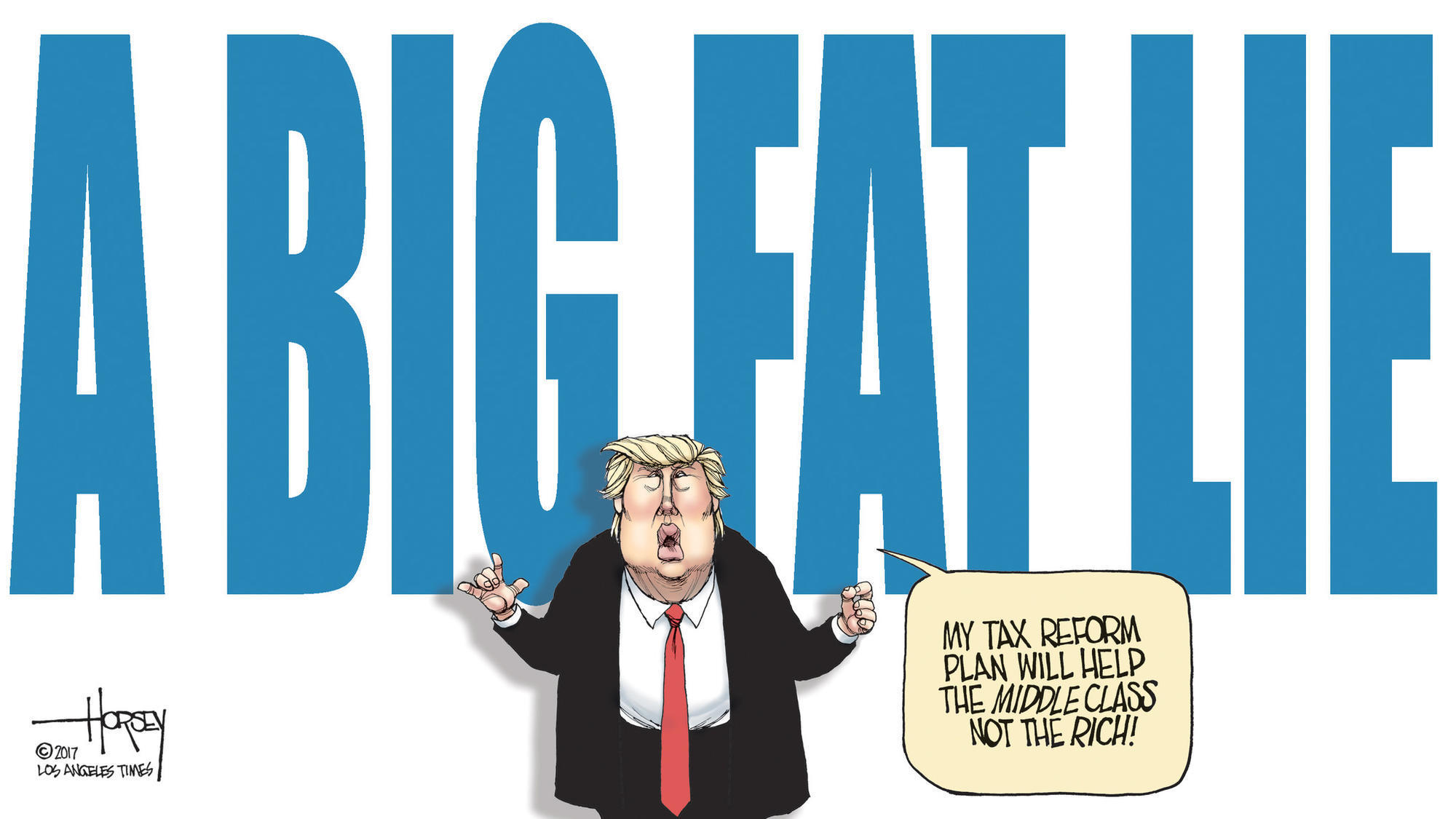 In selling their tax plan to lawmakers and the American people, President Trump and Republicans leaders have said 1) that the plan would lead to a huge increase in GDP and economic growth, which 2) would lead to higher tax revenues to offset the budget deficit the plan creates, and 3) all Americans will benefit in seeing their taxes go down.  Trump himself has gone a little further, by lying that he and the wealthy would pay more under his plan.

But the lies are not working this time.   The plan already garners 52% disapproval among Americans according to recent polling.  New Hart Research polling finds the Republican tax bill is very unpopular in some very specific and inconvenient places: Sen. Bob Corker’s home state of Tennessee (30% approve), Sen. John McCain’s and Sen. Jeff Flake’s home state of Arizona (26% approve) and Sen. Susan Collins’ home state of Maine (22% approve).   Further, small businesses are opposed to the plan by 51%, according to a new Public Policy Polling poll.  34% of small businesses support the GOP tax plan, while 52% agreed with the statement that current proposals favor large corporations over small businesses.  58% said it felt wealthy corporations would benefit the most.

Why are the lies not working.  Have all small businesses become Democrats?   Have Tennesseans, Mainers and Arizonans all become liberal?

I humbly submit, that in our current alternative-fact-non-truth world where nothing matters anymore, that facts and evidence actually do matter.   Perhaps its because the public can remember back to the halcyon days of the early 2000’s when they were sold the very same Trickle Down Laffer Curve bullshit as they are being sold today.  They remember what happened in the 2000’s, after the Bush tax cuts passed.  It did not lead to increased economic growth.  It did not pay for itself, instead leading to huge deficits and debt.  And every American surely did not benefit.  The wealthy benefited tremendously, but the average Americans remembers that they got a $300 rebate and then the Financial Crash of 2008 happened, which wiped out their savings, cost them their job and home, and left everyone but the top 1% horribly worse off.    So replaying the Tax Cuts Cures All playbook again so exactly was the wrong choice, but then again, it is all the GOP has.

Further, the facts actually do matter theory is bolstered by the fact that several recent studies and analyses from both sides of the aisle destroy the Trumpian Republican talking point.  The Tax Foundation, which uses an aggressive “dynamic scoring” to measure the effect of tax changes on the economy much to the delight of Republicans, found that the economy won’t reach 3 percent growth in a single year until 2027 under the House bill — far less than the claims of President Trump and GOP leaders.

A Penn-Wharton study, which was led by a former Bush administration economist, finds economic growth would actually be less than 1 percentage point larger by 2027.   A Tax Policy Center study, which was led by former Democratic budget officials, finds the House bill would boost the economy by just one-third of a percentage point.  Meanwhile, a University of Chicago Booth School of Business survey found that just 2 percent of economists agreed that the GOP tax cuts would substantially boost the economy by 2027, while a majority — 51% — disagreed.

Every one single of these aforementioned studies finds the Republican tax plan would substantially increase the deficit in the range of $1 trillion to $1.5 trillion over 10 years.  And as I mentioned in the Open Thread today, a new CBO report out this week shows that the Senate GOP tax plan would hurt most lower income people over the next decade.

But the GOP will likely pass this bill anyway, because, in the end, if you can’t vote for tax cuts for the wealthy there is no reason to be a Republican.  But these Congressional Republicans go into this vote knowing that their lies have failed this time, and that everyone knows the game they are playing, and that there will be consequences in the next election.  Before, the GOP could convince themselves that their lies worked.  Not this time.

19 comments on “The Republicans always lie about their tax plans. But this time it’s not working.”