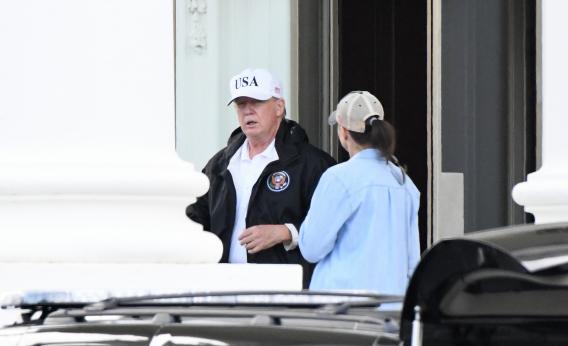 “Over a July dinner with Oracle CEO Safra Catz — who has been mentioned as a candidate for several potential administration jobs — McMaster bluntly trashed his boss… The top national security official dismissed the president variously as an ‘idiot’ and a ‘dope’ with the intelligence of a ‘kindergartner.’”

A sixth source said that McMaster “had made similarly derogatory comments about Trump’s intelligence to him in private, including that the president lacked the necessary brainpower to understand the matters before the National Security Council.”

Sen. Lindsey Graham (R-SC) said Alabama GOP candidate Roy Moore (R) “poses a threat to the Republican agenda, adding that he favors maneuvering that would trigger a new special election,” The Hill reports.  Said Graham: “We’re about to give away a seat that can determine the future of Trump’s agenda, and I hope the good people of Alabama on the Republican side will try to find a way to pick a nominee that can represent the conservative cause in an effective way.”

He added: “This Jones guy’s not going to help us on anything that Trump wants to do.”  Meanwhile, a source close to Senate Majority Leader Mitch McConnell (R-KY) tells the Daily Caller that a write-in campaign is “no longer viable.”

Hey Lindsey, cancelling an election because you are losing it is something dictators do.

Daily Beast: “Multiple sources in and out of the West Wing say that some of Trump’s closest advisers have recommended that he not criticize Moore publicly prior to the election in November. Among those privately encouraging him to stay mum have been Kellyanne Conway, the president’s counselor and former campaign manager, and Steve Bannon, Trump’s former chief strategist and current Breitbart chairman.”

“According to two sources—one a White House official and the other a Republican source close to both the White House and Bannon—Bannon has spoken multiple times on the phone to President Trump since late last week. At least one of those calls was devoted to discouraging the president from rejecting or criticizing Moore in public statements.”

The Republican plan is the opposite of tax reform https://t.co/tTUzuyouNG pic.twitter.com/UzIb2YylJm

Nate Cohn: “All considered, this year’s election results and the current national political environment are consistent with the possibility of a so-called wave election, like the ones that brought Democrats to power in the House in 2006 and swept Republicans into office in 1994 and 2010.”

“But Republicans have important structural advantages. They enter the cycle with the advantage of incumbency and a highly favorable congressional map, thanks to partisan gerrymandering and the tendency for Democrats to waste votes with overwhelming margins in heavily Democratic urban areas.”

“As a result, it’s not obvious that the building Democratic wave will be enough to flip control of the House.”

Washington Post: “Coming off Election Day wins from Seattle to Long Island, Democrats are starting to see the shape of a new majority, built on a potential suburban backlash to changes in the tax code.”

“Republicans have accused the minority party of demagoguery and bad math. In New Hampshire, Republican Gov. Chris Sununu has praised the tax plan for doubling the standard deduction and adding a property-tax exemption. Democrats have falsely claimed that the bill would raise taxes on ‘most working-class families’ — only 6.5 percent of lower-income households will take a direct hit, though many taxpayers making less than $100,000 would get little.”

“Yet Democratic wins, and polling about the tax bill, has led the party to think that it can cleave millions of voters from the GOP.”

In his new memoir, Joe Biden suggests he could have won in 2016. Does that mean he should run in 2020? https://t.co/ShfYmHUaom pic.twitter.com/1QbKHD3lGq

Jonathan Bernstein: “Yes, polls can be wrong. But there’s no particular reason to believe these are any more than a few points off, and they could just as easily be wrong in either direction. No, the 2016 election didn’t reveal major polling problems. The idea that national polls were wrong during the 2016 general election is simply a myth, although some state polls were off by several percentage points. And the polls predicted his nomination from early on; it was “experts” (such as myself) who were wrong. There’s no reason beyond wishful thinking among those who do support the president to believe that he’s actually popular and surveys are just missing it for some reason.”

David Frum: “As I write on November 19, it may see like the GOP tax plans are carrying all before them. A big tax cut has passed the House. A somewhat different plan passed late Thursday night through the Senate Finance Committee. The president is bellowing on Twitter his readiness to sign almost any work product that arrives at his desk.”

“But what is heading toward him is not the kind of reform that can command broad political support, and thus stand the test of possible electoral defeat in 2018 and 2020. It’s a scandalous expression of upper-class and Sunbelt chauvinism that will melt away within weeks of the next Democratic electoral success. Even if it becomes law, as still seems improbable in the face of the plan’s terrible poll numbers, what firm would venture a long-term investment based on tax changes so likely unsustainable?”

The values that "values voters" care about most are policies, not character traits. https://t.co/xqfEzKU9dl pic.twitter.com/XbpAAvfGH7

“Investigators working for special counsel Robert Mueller are scheduled to interview additional senior White House officials in the coming weeks, adding to their list of high-profile interviews and pushing the investigation closer to President Trump and his family,” CNN reports.

.@PressSec asks media to say what they're thankful for prior to asking question. @CeciliaVega: "I am thankful for the First Amendment." pic.twitter.com/vMeWTjx2mt

On Monday, the Tax Policy Center released a new analysis of the House tax bill that disproves claims from GOP leadership and the Trump administration that the deep tax cuts for corporations and the wealthy will create so much economic growth that the bill will pay for itself.  Treasury Secretary Steve Mnuchin recently insisted that “not only will this tax plan pay for itself, but it will pay down debt.” White House economic adviser Gary Cohn agreed, saying that “we can pay for the entire tax cut through growth over the cycle.”

Yet the new study by the Tax Policy Center finds that while the bill would somewhat boost the nation’s economic output, leading to more revenue for the government, it would not be enough to offset the revenue lost by the tax cuts. The net effect of the bill would be to increase the deficit by $1.27 trillion over 10 years.  The estimated growth would be lower than promised and the impact would diminish over time. The Tax Policy Center estimates that the tax cuts would increase the U.S. GDP by 0.6 percent in 2018, 0.3 percent in 2027, and 0.2 percent in 2037.  The revenue generated by the growth would be about $169 billion over 10 years—a drop in the bucket to the revenue the government would lose over that same period

“FCC Chairman Ajit Pai will reveal plans to his fellow commissioners on Tuesday to fully dismantle the agency’s Obama-era net neutrality regulations, people familiar with the plans said, in a major victory for the telecom industry in the long-running policy debate,” Politicoreports.

“The commission will vote on the proposal in December, some seven months after it laid the groundwork for scuttling the rules that require internet service providers like Comcast or AT&T to treat web traffic equally.”

By loading so many favors to big donors into bill, GOP is throwing away best chance in a generation for corporate tax reform. A lament https://t.co/jVWWANfa5y

“The settlement, which requires a judge’s approval, resolves what are known as ‘derivative’ claims against Fox officers and directors, including: Rupert Murdoch and his son Lachlan, who are Fox’s executive chairmen; James Murdoch, another son and its chief executive, and Ailes’ estate.”