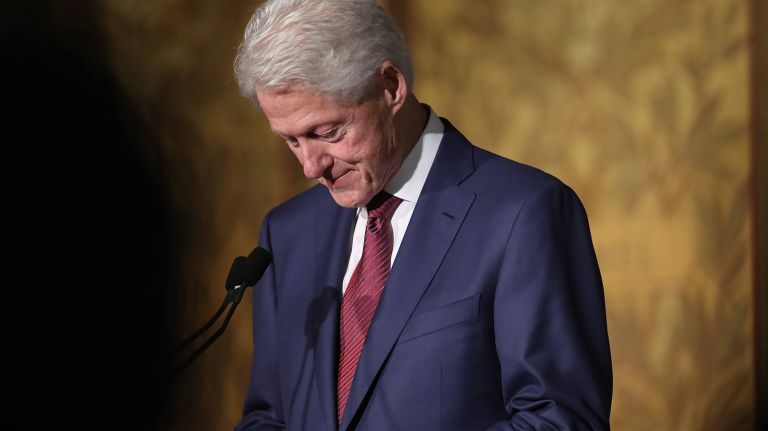 Once the #metoo floodgates opened giving voice to women who wanted some accountability for the bullies, the conversation found its way to politics via the vile pedophile Roy Moore, to the shock of Al Franken and suddenly veered to Bill Clinton.

Bill Clinton, of course, is a problematic figure in terms of sexual harassment.   He continues to be a conundrum for those who expected that he would be driven out of office just because the VRWC wanted that to happen.  But I am stunned that Bill Clinton is the issue that so many want to talk about in terms of “accountability” moments now.  I probably shouldn’t be stunned — if there is an opportunity to indulge in Clinton Derangement Syndrome, there is an element of the media (I am looking at you NYT) and the usual Clinton detractors who will take the opportunity.  What they won’t do is cycle back to the issues at hand — which doesn’t call for BothSidesism to deal with the very real injustice being addressed now.

I’ll repeat, that I do not doubt that Mr. Bill has issues with women.  But I am very wary of the calls to revisit his behavior in light of the #metoo movement.  And that wariness is in two things.  One is that when Bill Clinton was President, there really was a full court press by the VRWC to take him down.  As someone who lived through it, the thing I know is that it was very difficult to tell what was real and what was made up in this — the same people who were pushing the narrative that the Clintons had Vince Foster killed were the same who were pushing all of the abuse narratives.  Second is Ken Starr.  Starr had $70M of taxpayer money to get Clinton out of office.  And while he started with Whitewater, it expanded to pretty much any scandal they thought would fit the bill.  Starr investigated the claims of all of the women who accused Bill Clinton, immunized many of them and still could not come up with conclusive evidence of anything other than lying about an affair with Monica Lewinsky.  The third is false equivalency.  This is the attempt to ask Democrats why they were not as strident about Bill Clinton’s misbehavior as we are about Roy Moore — and utterly erasing the almost 2 term long investigations into various Clinton scandals.

Was Starr incompetent?  Could be.  But I do know that the claims of these women got a better hearing by the justice system than most homicides do.  If $70M could not produce conclusive evidence of misbehavior by Bill Clinton, why on earth are we still talking about this?

And the false equivalency is just stupid.  In the moment, it was difficult to know where the real stories were and the record is pretty clear that Ken Starr could produce a ton of smoke, but no indictments.

For now, it looks to me that we have entered a new phase of Clinton Derangement Syndrome — this one not so much focused on Bill Clinton as on his supporters at the time.  The effort now is less about Clinton (who, I will remind, is no longer in power and no longer an issue), than it is to get the Clinton supporters to admit that they were wrong.  The Gloria Steinem op-ed (and there were other examples of women going overboard to defend Clinton) that tried to exonerate Clinton back in the day was embarrassing then and embarrassing now.  And most women would not have subscribed to her rationalization and still don’t.  But the Steinem op-ed is a useful stand-in for Bill Clinton’s support.  It is galling to the Clinton Derangement Syndrome crew that this guy never got his comeuppance.  And he left office more popular than when he entered it.  And now it appears that Clinton supporters (read women PLUS Hillary) need to apologize for not helping to bring this guy to account.

You can read a million of these Clinton resuscitations (and listen to these interviews) and not one mentions Ken Starr or the effort to bring Clinton down.  But they *do* want Clinton supporters to provide a mea culpa.  When you read these accounts, you also hear about Hillary Clinton’s efforts to defend her husband.  And these folks are looking for her to don sackcloth and ashes too.  The entire effort is pretty much focused on trying to get someone, anyone to say that they made a mistake in ever supporting either Clinton.  Which has nothing to do with #metoo or the support of pedophilia that is engulfing the GOP right now, or any of the other instances of men who behaved badly with women and who have never faced their accountability moment.

On the other hand, Clarence Thomas still sits on the Supreme Court.  Anita Hill never got the hearing that Paula Jones, Gennifer Flowers, etc got.  She (and her corroborating witnesses) were shut down pretty handily by the Biden-led Judiciary Committee.  Thomas, unlike Clinton, still has his government job.  Of course, the Pussy Grabber In Chief still has a job and there is still nowhere near the effort to deal with his misogyny and assaults as there is in the effort to try to relive the Clinton past. Again.

Instead of fighting one more Clinton battle, it is time to deal with the injustice issues ahead of us.  Trying to force Clinton supporters to recant that support is another Clinton sideshow.  Unless someone figures out where Ken Starr screwed the pooch on his investigation, there is little to be gained except the media show of Democrats still fighting over the Clintons.  No injustices resolved, much less heard.  More Clinton scandal is good for clicks and ratings — especially when you can have Democrats at each other’s throats again for no good reason — but has precious little with dealing with the ongoing injustices highlighted by #metoo.

47 comments on “Bill Clinton Is Not The Problem”