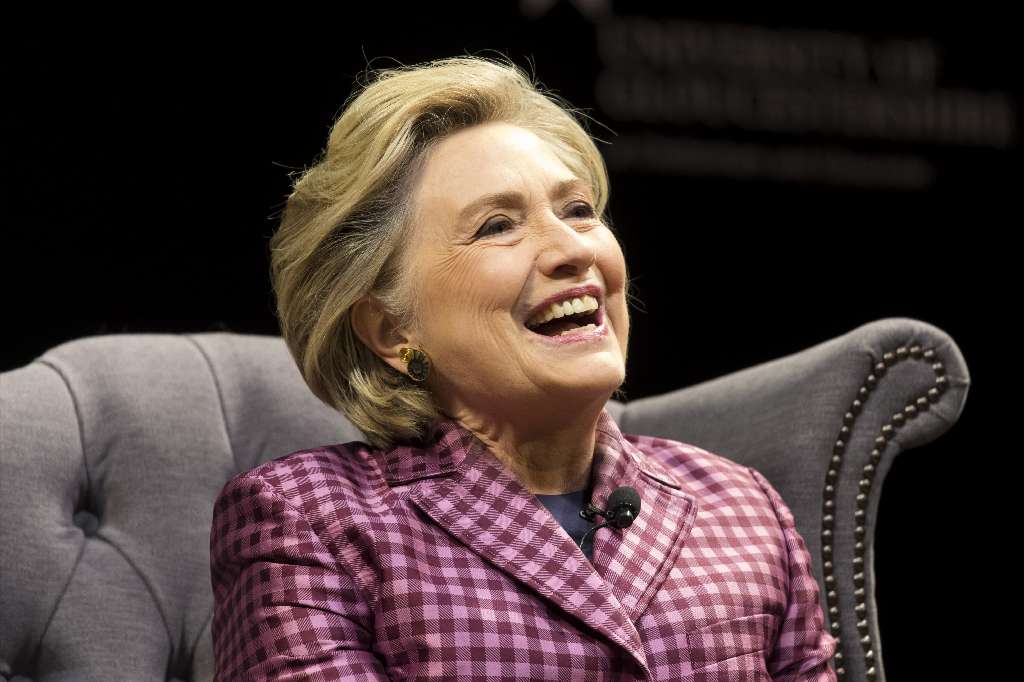 “Trump has tweeted or retweeted a message about Clinton approximately 837 times since 2012, and 56 times since the election.”

His tweet this morning: “Crooked Hillary Clinton is the worst (and biggest) loser of all time. She just can’t stop, which is so good for the Republican Party. Hillary, get on with your life and give it another try in three years!”

This was likely in response to Hillary saying Trump’s election has questions of illegitimacy, due to the Russian interference and voter suppression.  And perhaps due to this quote:

“I didn’t think he’d be as bad as he turned out to be.”  — as quoted by Politico. When asked if there was anything about him she admired, she said: “No. The answer is absolutely no.”

And then she waded into the Roy Moore-Al Franken controversy.   “Hillary Clinton slammed President Trump and Alabama Senate candidate Roy Moore over their alleged sexual misconduct, criticizing them for not ‘accepting responsibility’ and ‘apologizing’ for their reported transgressions as Sen. Al Franken did,” Politico reports.

“Clinton said that Franken, who was accused this week of groping a female broadcaster in 2006, acted responsibly by owning up to his actions and publicly apologizing for them — a far cry from the response given by Trump and Moore.”   I will concede that point.

AL. com endorses Doug Jones, delivers a scathing rebuke of Roy Moore: “A vote for Roy Moore sends the worst kind of message to Alabamians struggling with of abuse.” https://t.co/57KRhvCUjz

Adam Davidson: “If it gives us nothing else positive, the Republican tax plan—and, in its Senate form, the health-care repeal—at least provides clarity. There is no debate. The middle class will, in the long run, pay more in taxes than under current law, and the rich will pay less.”

“Just ask the very people who wrote it. The U.S. Congress Joint Committee on Taxation is run by the chairs of the House Ways and Means Committee and the Senate Finance Committee—Representative Kevin Brady and Senator Orrin Hatch, respectively. The Joint Committee’s reports of this week make startling reading, or as startling as a series of spreadsheets of tax revenue data can be. The report shows that this bill is much like a teaser rate on a new credit card: there are some goodies in the first couple of years, but those disappear fairly quickly, at least for those below the median income.”

“The report shows that the rich benefit and the poor are hurt in every way that it measures.”

Air Force Gen. John Hyten, commander of the U.S. Strategic Command (STRATCOM), told an audience that he has given a lot of thought to what he would say if President Trump ordered a strike he considered unlawful, CBS News reports.

Said Hyten: “I think some people think we’re stupid. We’re not stupid people. We think about these things a lot. When you have this responsibility, how do you not think about it?”

“As head of STRATCOM, Hyten is responsible for overseeing the U.S. nuclear arsenal. Hyten said he has been trained every year for decades in the law of armed conflict, which takes into account specific factors to determine legality — necessity, distinction, proportionality, unnecessary suffering and more. Running through scenarios of how to react in the event of an illegal order is standard practice, he said.”

Politico: “Aides in the White House often show Trump polls designed to make him feel good, according to aides and advisers. Usually they’re the ones that focus just on voters who cast ballots for him in 2016 or are potential Trump supporters —Trump’s base—but occasionally include public polls like Rasmussen, depending on what the numbers say.”

Said Gov. Chris Christie (R): “You know, I thought that he’d be a little less in campaign mode than he’s been. I think he’s never really kind of gotten out of campaign mode and I thought he might. I guess it’s his judgment that that’s what he has to do but that’s surprised me a little bit.”

Jack Shafer: “If we’ve learned anything from months of scandal reporting, the Russians set their sights on two types of people wandering the halls of Trump Tower. There were the self-promoters like Michael Flynn and Paul Manafort who they knew would cooperate based on direct or potential payouts. But the Russians also shopped a second group of Tower denizens, the over-their-heads strivers often compared to the hapless Fredo Corleone. These Fredos—George Papadopoulos and Carter Page—attracted Russian agents like magnets, and were easily manipulated by direct appeals to their stooped egos.”

“But of all the Fredos occupying Trump world, perhaps Donald Trump Jr. proved to be the easiest mark for the Russians.”

Politico: “Controlling potentially damaging tweets was a job left mostly to the legal team in the early days of the administration. Marc Kasowitz, a former Trump attorney, and Jay Sekulow, a current member of the president’s legal team, gave Trump one simple rule to guide his tweeting habit: Don’t comment online about the Russia investigation.”

“None of the advice seemed to have any lasting effect on a president who views acting on his own impulses as a virtue. And these days, the staff has basically stopped trying: There is no character inhabiting the West Wing who is dispatched to counsel the president when he aims the powerful weapon of his Twitter feed at himself.”

“GOP leadership is confronting mushrooming demands from individual senators with much more power to bollix up the tax plans, thanks to the party’s super-thin majority,” Politicoreports.

“Sen. Ron Johnson (R-WI) has already said he won’t vote for his colleagues’ proposal because of how it treats small businesses… Deficit hawks like Sens. Bob Corker (R-TN) and Jeff Flake (R-AZ) are worried the plan will cost far more than advertised thanks to its liberal use of “temporary” tax provisions that will likely be eventually extended.”

“Moderate Susan Collins (R-ME) has her own concerns, including with plans to repeal the Affordable Care Act’s individual mandate to have health insurance as part of tax reform. Others like Sens. John McCain (R-AZ) and Lisa Murkowski (R-AK) have been wildcards, avoiding taking a public position on the proposal.”

The news has dribbled out slowly, but the totals are striking: “the Trump campaign interacted with Russians at least thirty-one times throughout the campaign” and there were “at least 19 known meetings." https://t.co/w3Og2g0XGC

John Cassidy: “It is entirely conceivable that, in two weeks’ time, the Republican Party’s leaders will have largely succeeded in railroading through Congress an unpopular, regressive, and damaging tax reform. That was their plan from the beginning, and so far it has worked out much as they intended. On Thursday, the House, spurred on by Paul Ryan, voted to approve its version of the legislation. Now everything depends on what happens in the Senate.”

“To get their tax plan through this final legislative stretch, the Republicans will try to rely on speed, subterfuge, and diversion. McConnell and Ryan have read the opinion polls. They know that there is widespread opposition to their plan’s major elements, such as its big tax cuts for corporations, unincorporated businesses, and rich people (like the President), or its new limits on popular deductions for mortgage interest and state and local taxes.”

“That explains why the Republicans didn’t hold any hearings in the House, and why they are adopting similar blitzkrieg tactics in the Senate. The G.O.P.’s strategy is to rush this thing through before the other side has time to organize a defense.”

“White House senior adviser Jared Kushner told congressional Russia investigators that he did not communicate with WikiLeaks and did not recall anyone on the Trump campaign who had,” CNN reports.

“But Kushner did receive and forward an email from Donald Trump Jr. about contact Trump Jr. had with WikiLeaks, according to a new report this week and a letter from the Senate Judiciary Committee.”

CNN’s @Smerconish on the recent string of harassment allegations against powerful men: “We’re in the middle of a sexual rights revolution, the right of a woman to be left alone and the corresponding obligation of a man to leave her alone.” pic.twitter.com/wbMCcAIviA

“A senior Russian official who claimed to be acting at the behest of President Vladimir Putin of Russia tried in May 2016 to arrange a meeting between Mr. Putin and Donald Trump,” the New York Times reports.

“The news of this reached the Trump campaign in a very circuitous way. An advocate for Christian causes emailed campaign aides saying that Alexander Torshin, the deputy governor of the Russian central bank who has been linked both to Russia’s security services and organized crime, had proposed a meeting between Mr. Putin and Mr. Trump. The subject line of the email, turned over to Senate investigators, read, ‘Russian backdoor overture and dinner invite,’ according to one person who has seen the message.”

“Steve Bannon has vowed to lead a ‘season of war’ on Washington’s Republican establishment. But donors most likely to fund a disruptive campaign may be hard to win over,” the Wall Street Journal reports.

“In recent weeks, however, two of the biggest GOP donors who have funded disruptive campaigns in the past have distanced themselves from Mr. Bannon. And the turbulent Senate race in Alabama, where Mr. Bannon backs Republican candidate Roy Moore, who is facing sexual assault allegations, has energized Mr. McConnell’s defenders.”

WaPo has identified at least 30 times that members of the Trump campaign met or corresponded with Russians. https://t.co/xWbLuuQ1Bn