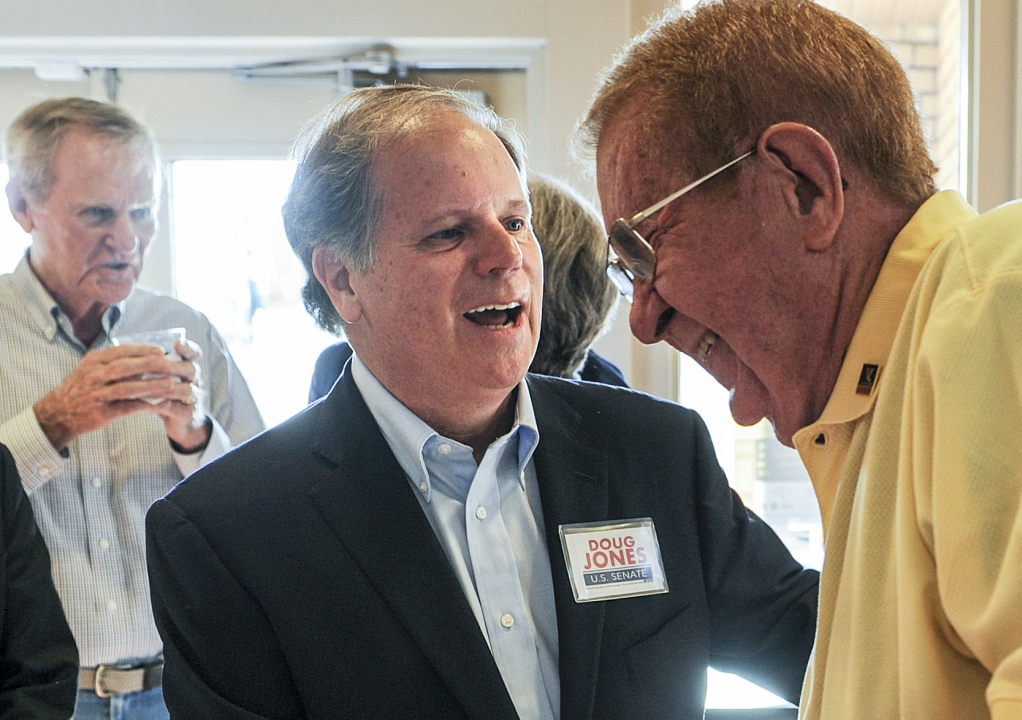 A former colleague of GOP Senate candidate Roy Moore said that it was “common knowledge” that the Alabama Republican dated high school girls when he worked in the Etowah County District Attorney’s Office in the 1980s, The Hill reports.

Said Teresa Jones: “It was common knowledge that Roy Moore dated high school girls, everyone we knew thought it was weird. We wondered why someone his age would hang out at high school football games and the mall… but you really wouldn’t say anything to someone like that.”

Two former top intelligence officials warned on Sunday that they think President Donald Trump’s efforts to downplay Russian meddling in the U.S. presidential election is putting the country at risk. “The threat posed by Russia … is manifest and obvious,” Former Director of National Intelligence James Clapper said. “To try to paint it in any other way is, I think, astounding, and in fact, poses a peril to this country.”

Former CIA director John Brennan spoke on CNN’s State of the Union alongside Clapper and said Trump is demonstrating to world leaders that he can be “played” with a little ego stroking. “By not confronting the issue directly and not acknowledging to Putin that we know you’re responsible for this, I think he’s giving Putin a pass,” Brennan said. “I think it demonstrates to Mr. Putin that Donald Trump can be played by foreign leaders who are going to appeal to his ego and try to play upon his insecurities, which is very, very worrisome from a national security standpoint.” Clapper agreed that Trump “seems very susceptible to rolling out the red carpet and honor guards and all the trappings and pomp and circumstance that come with the office, and I think that appeals to him, and I think it plays to his insecurities.” As a result of this dynamic, “both the Chinese and Russians think they can play him,” he added.

President Trump tried to walk back on his comments supporting Vladimir Putin https://t.co/JCCifWCdZ9

On the one hand, he is of the mind that if he admits it, his win is illegitimate.  He is correct on that.  On the other hand, he can’t admit it because that would be like admitting he is complicit.  And he is right on that too.   Because he was.

A Republican close to Senate Majority Leader Mitch McConnell (R-KY) tells Axios: “McConnell is a very pragmatic guy, but he’s very principled guy. And he’s willing to lose the seat to prevent someone who’s guilty of these things from taking it.”

Huffington Post: “The Democratic Party of James Buchanan, from 1855-1860, appeared ― on the surface ― to be ascendant in the American politics of the day. They controlled the presidency, majorities in the Congress and the majority of state legislatures and governorships. Their great rival party, the Whigs, had collapsed into internal factions after their 1856 electoral loss and the new Republican Party was nascent. They were so powerful that they controlled both the entire south and significant parts of the North ― and there was, of course, no ‘west coast blue wall’ in the 1850s.”

“Nonetheless, the supposed dominance of the Democratic Party in the late 1850s papered over and masked critical internal divisions that would destroy the party in 1860 and leave it nearly irrelevant at the presidential level for almost 70 years.”

“Basically, those critical internal divisions were between the Southern Democrats, who were unified behind slavery and ‘southern values’ and the Northern Democrats, who were much warier of slavery and were much more unified around economic concerns. Their uneasy alliance collapsed entirely in 1860, when the party actually split on the ballot between the Northern and Southern Democrats, handing Lincoln the election. The south seceded, Lincoln won the Civil War and the party didn’t recover until FDR. Indeed, the collapse of the party was so catastrophic that the only times the Democrats won the presidential election between 1856 and 1932 were typo non-contiguous terms for the idiosyncratic Grover Cleveland, and when Teddy Roosevelt split the Republican vote off Taft in 1912 and threw the election to Woodrow Wilson.”

“History repeats itself in inexact cycles, and the Republican Party of today bears remarkable similarities to the Democratic Party of the 1850s.”

“The implications of that are clear, as Gillespie found during the Virginia race. For Republican candidates, crossing the president risks the ire of the Trump base and depressed turnout. Embracing him too fully risks energizing the opposition. Trump won’t be on the ballot until 2020. In the meantime, he has made the GOP his party, and those who share the label are left to deal with the consequences.”

Stan Collender: “Individual members are at least hinting — and many are openly saying — that the Republican Party is no longer as important as their personal reelection prospects. That means the bill’s enactment may not be as important to them as preventing locally politically noxious individual provisions — like the deductibility of state and local taxes  — from becoming law.”

“With support for the Republican party no longer a guaranteed political lever, the leadership has little choice but to try to appease senators and representatives by changing proposed tax provisions so the recalcitrant members have something they can take back to their constituents to demonstrate their personal value. But in a tax bill of this size that has budget restrictions that limit what may be done, almost every modification made for one representative or senator typically will cause political pain for another and, therefore, no net increase in support.”

Today 60,000 neo-fascists marched openly in Poland under a slogan taken from a Donald Trump speech.

New York Times: “Nearly a year later, that plan is coming to fruition. Mr. Trump has already appointed eight appellate judges, the most this early in a presidency since Richard M. Nixon, and on Thursday, the Senate Judiciary Committee voted along party lines to send a ninth appellate nominee — Mr. Trump’s deputy White House counsel, Gregory Katsas — to the floor.”

“Republicans are systematically filling appellate seats they held open during President Barack Obama’s final two years in office with a particularly conservative group of judges with life tenure. Democrats — who in late 2013 abolished the ability of 41 lawmakers to block such nominees with a filibuster, then quickly lost control of the Senate — have scant power to stop them.”

Read.  This is a good news story.

Frank Bruni on Republicans driving off the sexual assault cliff.

“When Zeigler was asked by The Washington Examiner about an allegation that the Senate candidate Roy Moore initiated sexual contact with a 14-year-old girl when he was 32, Zeigler cited the biblical couple to say, essentially: No biggie! This is as old as Christianity.

“Take Joseph and Mary,” he explained. “Mary was a teenager and Joseph was an adult carpenter. They became parents of Jesus. There’s just nothing immoral or illegal here. Maybe just a little bit unusual.” He made it sound as if Moore were some religiously inclined analogue to those military-history enthusiasts who dress in the uniforms of yesteryear to travel back to the Revolutionary War. Moore was merely re-enacting the New Testament in the name of lust.

Are you really surprised? If so, you might want to see a doctor about your amnesia, because my memory is pretty spotty and still I can recall Jimmy Swaggart and Jim Bakker and Larry Craig and David Vitter, and with just a few minutes of Googling, I could fill the rest of this column with more names of more pastors and politicians who presented themselves as steadfast moral conservatives and were revealed to be agents of precisely the kind of behavior they so exuberantly condemned. These frauds and hypocrites are as legion now as lepers were in the days of Jesus.”

Before Mueller's indictments were unsealed, 3 sources told VF that Kushner worked the phones asking whether they thought the probe would amount to anything. "They're in a world of shit. He may seem cool, but he's sweating."https://t.co/lShBrlLdUP

Jennifer Rubin says the GOP cannot be rebranded.  It must be junked.

“How could one “rebrand” this, or trust these people again? I find it hard to imagine how. So the future of the GOP? It’s either a nationalist front party or a battleground mostly between Trumpists and strident ultra-right-wingers whose platform (repeal Obamacare; corporate tax cuts; reckless foreign policy that imagines war with Iran and/or North Korea are viable options) is unacceptable to the vast majority of the country. It’s not a civil war in which I’d have a favorite side.

In short, the GOP, I think, is kaput. The real question is what sprouts up to fill some of that space, the ground occupied by those who favor reform conservatism; responsible internationalism; free trade and robust immigration; tolerance and the rule of law; and market economics with an ample safety net. I don’t have the answer. I only know it cannot be the GOP.”

The GOP has already embraced a candidate who stands accused of sexual assault. He’s in the White House: https://t.co/9caKgDEApC