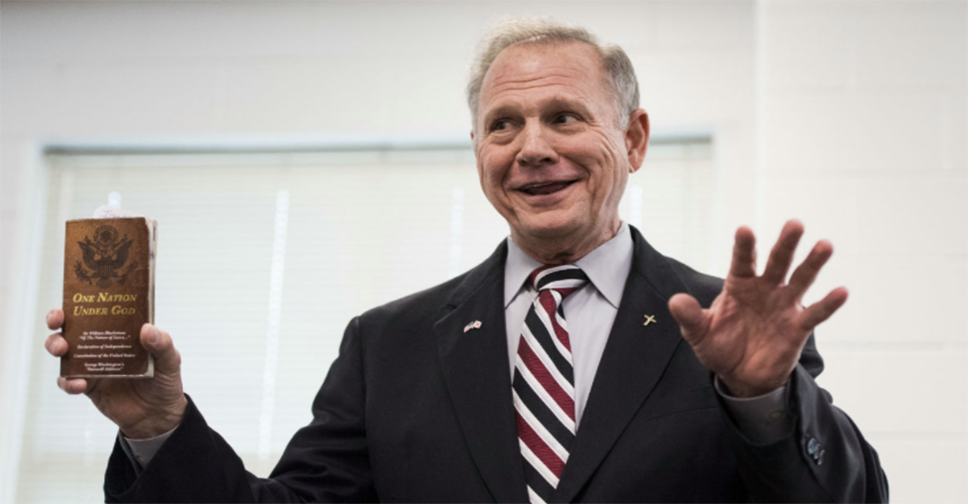 THE PARTY OF PEDOPHILES.   Roy Moore (R) “sent a fundraising email Thursday afternoon asking for donations to combat the ‘Obama-Clinton Machine’s liberal media lapdogs,’ hours after the Washington Post published accounts from four women who said that Moore pursued relationships with them when he was in his 30s and they were teenagers,” Politico reports.  Said Moore: “The forces of evil will lie, cheat, steal — even inflict physical harm — if they believe it will silence and shut up Christian conservatives like you and me.”  The email then asks for an “emergency contribution” to Moore’s campaign.

Jonah Goldberg: “I am one of those naïve fools who actually believed that the conservatives who often talked the loudest about the supreme importance of character were sincere. The last two years disabused me of that.”

“But just as a matter of cold realpolitik, I cannot grasp why so many people think it’s a good idea to stand by a man who, if elected, will serve as a negative campaign ad made flesh. I get the argument that it’s a ‘binary choice!’ But it’s a binary choice now, because a bunch of people who want to see the GOP burn down made it one. In the long run, a Senator Moore would cost Republicans more seats than the one he might give them. He’d be an albatross for every elected Republican, including President Trump, who will be asked to take a side on every scene in the clown show Moore would bring to Washington. And every conservative who ever denounces a Democrat for immoral behavior or insane views will be asked, ‘Oh yeah, why did you support Roy Moore then?’”

“Saving Steve Bannon’s reputation as the leader of some (doomed) movement certainly isn’t worth it, not for the cost to the GOP not to mention your own souls.

“1. Democrats win a Senate seat. Most polls have found Doug Jones (D) trailing Moore by single digits in a state that went for Donald Trump by 28 percentage points in 2016. It’s impossible to believe this story won’t close that gap. The emergence of Sen. Luther Strange (R-AL) as a possible write-in candidate in the special election on December 12 further changes the calculus and likely helps Jones. With a Senate majority of just two seats, a Democratic win imperils the entire GOP legislative agenda until at least next year’s elections.

2. Moore becomes the new Todd Akin. If Moore remains on the ballot — and if he wins the special election next month — he immediately becomes a walking political ad for Democrats in the 2018 midterm elections just like Todd Akin was after his “legitimate rape” comments in the 2012 Missouri Senate race. Republicans are already worried about how Donald Trump will weigh down the GOP ticket and they do not need to add Moore’s weight.”

How the Roy Moore Allegations Were Covered on the Right https://t.co/37QURrNYMg

“Under the alleged proposal, Mr. Flynn and his son, Michael Flynn Jr., were to be paid as much as $15 million for delivering Fethullah Gulen to the Turkish government.”

MUELLER TIME – HOLLYWOOD EDITION.  McClatchy: “Rick Gates, indicted last week with his former boss and mentor Paul Manafort in the special counsel investigation of Russia’s meddling in the 2016 presidential election, is best known as a political consultant and lobbyist. Less well known is his sideline as a Hollywood producer. Gates has been involved in a handful of films, including this year’s Walk of Fame, which starred Clint Eastwood’s son Scott.”

“Gates himself has not been sued or charged in connection with any movies. But given that his co-producers have been, and that film production is known for being forgiving when it comes to clouding the original source of funds invested, experts say it’s extremely unlikely that Mueller is not investigating this part of Gates’ finances.”

The exits polls from Virginia show how powerful the age gap has become in American politics.  Voters under the age of 30 backed Ralph Northam (D) for governor over Ed Gillespie (D) by a stunning 39-point margin, 69% to 30%. Voters aged 30-44 backed Northam by 24-points.  In contrast, Gillespie won voters aged 45-64 by one point and won those over the age of 65 by six points.  CNN points out that young people came out to vote in greater numbers too: “They made up 14% of the electorate — dropping off less than usual from the previous presidential election.”

MENENDEZ JURY HUNG? “The juror dismissed from Sen. Robert Menendez’s bribery case said they began deliberations on Monday with nine of them — including herself — prepared to find him not guilty of the most serious charges. By Thursday, they were still deadlocked,” the Newark Star Ledger reports.

The juror “described a tense, sometimes combative, atmosphere in the jury room. The disorganized deliberations at moments broke down, with jurors speaking over each other, and at least once using foul language.”

TAX CUT PANIC.  Jonathan Swan: “With the release of the Senate’s plan yesterday, tax cuts are off to a stronger start than health reform’s fraught debut earlier this year. You’ve got high top rates on wealthy people, a concession to the left — yet tons of loopholes and crony tax breaks. Even Republicans who have been skeptical all year about tax reform’s prospects say they see glints of momentum.”

One reason: “Sheer political panic: This may be Republicans’ only chance to hold onto the House. GOP leaders, especially Speaker Ryan, are under no illusions — particularly not after the results in Virginia.”

People who think about politics ideologically are weirder and more unusual than they realize https://t.co/m0YdkZBFn8

SENATOR ROMNEY.  Politico: “The former GOP presidential nominee is huddling with Utah’s class of GOP power brokers, contacting the state’s major political donors, and hitting the trail for candidates running in local races amid mounting speculation that the state’s longtime senator, Orrin Hatch, will retire. Romney is also raising money for House and Senate Republicans, winning him favor with GOP leaders ahead of a treacherous midterm election.”

“The Senate might seem like an unexpected landing place for the 70-year-old former Massachusetts governor and two-time presidential candidate. Yet those who’ve spoken with Romney in recent days are convinced he’s prepared to jump in. After falling short in his quest for the White House and then being passed over by President Donald Trump for secretary of state, friends say Romney still has unquenched political ambitions.”

GOP RETIREMENTS SKYROCKET AHEAD OF BLUE TSUNAMI.  “A retirement wave has hit House Republicans, emboldening Democrats who have become increasingly bullish about their prospects of winning back a majority in 2018,” The Hill reports.

OUR REVENGE.  Michelle Goldberg: “If you squint at Tuesday’s results, you can sort of see a synthesis emerging between Obama and Hillary Clinton’s theory of the emerging Democratic electorate — in which Democrats win by appealing to a coalition of white professionals and minorities — and Bernie Sanders’s focus on grass-roots organizing and economic populism.”

“In some ways the election was the revenge of the Obama coalition. Educated white liberals joined people of color to elect an amazingly diverse group of candidates. A Latina single mother, Michelle De La Isla, was elected mayor of Topeka, Kan. Wilmot Collins, a refugee from Liberia, won the mayoral race in Helena, Mont. Seattle elected its first lesbian mayor, Jenny Durkan. After a year in which liberals have been bludgeoned by demands that they abandon identity politics and empathize with resentful Trump voters, the election was a reminder that white men needn’t be the center of the political universe.”

“Disguised Russian agents on Twitter rushed to deflect scandalous news about Donald Trump just before last year’s presidential election while straining to refocus criticism on the mainstream media and Hillary Clinton’s campaign,” according to an Associated Press analysis of since-deleted accounts.

“The analysis illuminates the obvious strategy behind the Russian cyber meddling: swiftly react, distort and distract attention from any negative Mr. Trump news.”

Trump remains the biggest drag on Republicans heading into 2018. But it shouldn’t be overlooked just how much they’ve screwed themselves. https://t.co/9om32wTksR pic.twitter.com/4hceYBLoEN

Andrew Sullivan: “Partly because I was being dragged left and right, up and down, by Trump’s daily offensiveness, and because I was spooked by the reactionary wave across the West, I lost sight of something pretty basic and unique to the U.S. Trump and the GOP are now deeply identified with throwing millions of people off health insurance; this issue was the main one in the Congress this past year; and this direct threat to the welfare of millions was easily the most important issue in the eyes of Virginia voters. Obamacare, in other words, is now a real asset for the Dems, and an anchor sinking the GOP. The record surge in new enrollments and the vote for Medicaid expansion in Maine confirm the popularity of the law and its central place in voters’ minds.

More to the point, if the Democrats focus on health care next year, and make it the center of their campaign, they can appeal to both moderates and lefties at once, without opening up Democratic divides on race, gender, and culture more generally. If the GOP passes a massive and deeply unpopular tax cut for the super-rich, this advantage will intensify. The basics still apply: Trump is historically unpopular (by miles); and the GOP’s policies on health and taxation are widely despised. That should be enough to win at least one half of the Congress next year, especially with an improved ground game.”

“Make no mistake: The results Tuesday are fully consistent with a so-called wave election, like the ones that brought Democrats to power in the House in 2006 and back out in 2010,” writes Nate Cohn at The Upshot. “All of the conditions for a 2018 wave are in place. The president’s approval rating is stuck in the mid-to-high 30s. The Democrats hold nearly a double-digit lead on the generic congressional ballot. The president’s party nearly always struggles in midterm elections.”

“Democrats, Republicans, take note: A new era has begun” by E, J, Dionne, Jr. provides a call to arms for progressives: “Tuesday’s Democratic sweep obliterated a series of outdated story lines in American politics and opened a new era. Forget those repetitious tales about some piece of President Trump’s base still sticking with him. It’s now clear, from Virginia and New Jersey to Washington state, Georgia, New York, Connecticut and Maine, that the energy Trump has unleashed among those who loathe him has the potential to realign the country….A brief memo to Democrats: You’d be fools to descend into sectarian infighting between your moderate and progressive wings. The results on Tuesday showed that voters across a broad spectrum backed candidates of various ideological hues to demand a new political direction. Your first job is to rally what we now know is an American majority that sees Trump’s presidency as a disaster for our nation.”

The 4 GOP factions (plus Rand Paul) fighting out the tax bill https://t.co/pn9En0FcVg