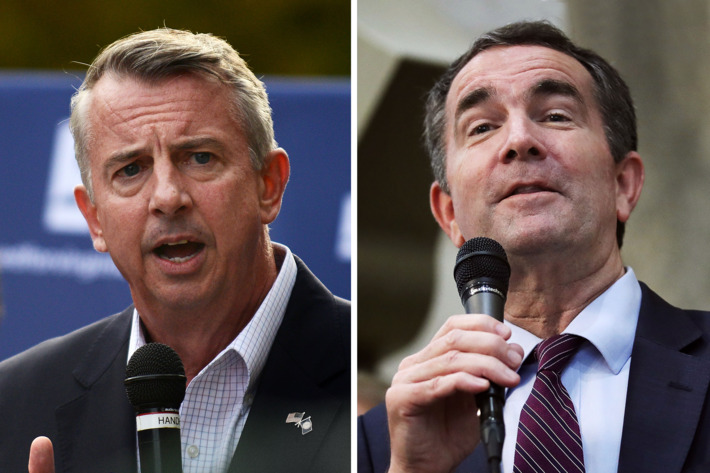 Today is election day in Virginia and New Jersey and New York City, and in some other parts of the country.  Democrats are expected to easily win election in NJ and NYC.  The close one is Virginia.  And it is disconcerting because the race has tightened as the Republican scumbag of a candidate named Ed Gillispie has employed a racist Trump strategy to win.  So it is giving us all some PTSD.   NBC News: “Democrats have been here before. They’re ahead in the polls, the Republican Party is divided and President Donald Trump’s flaws have been dominating the political landscape. And we all saw how that turned out for the party in 2016.”   “So as Virginia voters choose their next governor on Tuesday — either Democrat Ralph Northam or Republican Ed Gillespie — the central question has become: Unlike in 2016, can Democrats finally win with those advantages? Or will Republicans once again pull off the upset?”

First Read: “Those are the stakes, especially a year away from the all-important midterm elections in 2018, when control of the U.S. House is up for grabs and when Trump’s presence is sure to play another outsize role.”

Donnie Junior is going to prison.  The Russian lawyer who met with Donald Trump Jr. last June has changed her story and now says he asked for documentation of her Clinton allegations and said they could look at repealing the Magnitsky Act if his father won the election. Since it’s known the lawyer, Natalia Veselnitskaya,  has close ties to the Kremlin, an eyewitness story describing the offer of a quid pro quo will have legs.  Has Putin decided Trump is too hot to be useful?

Politico: “A prolonged absence by Paul could also complicate matters for Senate Majority Leader Mitch McConnell (R-KY) and the broader Senate GOP’s legislative agenda. Republicans control just 52 votes in the chamber, and absences can thwart the leadership from obtaining the simple majority needed to confirm nominees and pass some legislation. The Senate GOP is aiming to take up their own tax overhaul later this month, which they are trying to pass using a fast-track legislative procedure that undercuts a filibuster from Democrats. A bill could be released later this week.”

“Paul has already indicated that, like during the health care fight, he is preparing to use his leverage to push the Senate’s tax bill in a more conservative direction — pushing for more ambitious rate cuts and even repealing Obamacare’s individual mandate to purchase health insurance. He was the sole Senate Republican to vote against the GOP budget that set up the fast-track procedure for tax reform, called reconciliation.”

Meanwhile, Martin Longman has an interesting theory that I agree with on why Paul was attacked in the first place, and why he and the conservative media are not making a big deal about it, and why his attacked was only charged with a misdemeanor given the serious injuries suffered by a US Senator.

It's "Gaslight" meets "Spotlight" meets "All The President's Men." @RonanFarrow is beyond a tremendous journalist. https://t.co/C8HQc68h2J

President Trump said that guns were not to blame for the mass shooting at a church in Sutherland Springs, Texas, on Sunday.  Speaking to reporters in Japan during the first leg of his trip through Asia, Trump adopted a familiar GOP mass-shooting talking point.

“I think that mental health is your problem here,” Trump said. “Based on preliminary reports, a very deranged individual, a lot of problems for a long period of time.”  “This isn’t a guns situation,” Trump added.

Yeah, just like a hurricane is not a wind and water situation.

Mike Allen: “Here’s something unusual and refreshing: There are two highly ambitious Democrats who don’t even bother hiding their strong desire to run in 2020 — and to reshape the party: Los Angeles Mayor Eric Garcetti and New Orleans Mayor Mitch Landrieu, president of the U.S. Conference of Mayors.”

“When I asked top Dem donors and operatives about candidates like these, the consistent answer was that for the first time in our lifetimes, D.C. experience may be a vulnerability rather than an asset when running for president.”

Said one Democratic operative: “Mayors are fantastic. They actually do things, and that really energizes them. They don’t talk like D.C. types or cautious governors who have to wrangle with state legislatures. They tend to love their jobs and people really like them. It’s the one level of government in which Dems have a huge advantage and a deep well of talent.”

The richest 1% of America gets half the Trump tax cuts https://t.co/6aVUb3Rr0H pic.twitter.com/xH4X9FLG2K

“House Republicans’ tax bill would increase taxes for 12 percent of Americans next year, according to a new report from the nonpartisan Tax Policy Center. By 2027, at least 28 percent of Americans would see their taxes rise, the report says. Many of those taking a hit would be people who make less than $48,000 a year,” the Washington Post reports.

“The vast majority of Americans would get a tax cut if the bill becomes law… but the rich would benefit the most. The finding comes amid intense debate over whether this bill does enough to help the middle and working classes, a key promise of President Trump.”

A federal judge “ordered former Trump campaign chairman Paul Manafort and his associate Rick Gates to remain under house arrest with their movements tracked by GPS devices – until they offer up more bail money to assure their future appearances in court,” USA Today reports.  The judge said she was “inclined” to eventually “let both Manafort and Gates out of home confinement, and was even open to allowing them to travel within the United States so they could continue their consulting work, but not overseas.”

What I learned from three weeks of watching Fox News non-stop: https://t.co/2AtOJOOFGX pic.twitter.com/y3qCo161Pv

Jeff Flake: “I can say that reading these letters has been one of the most humbling experiences of my public life. To be clear: I don’t find them humbling because the people who wrote to me liked the speech. Indeed, some didn’t. I am humbled because until now I didn’t fully grasp the level of anxiety and real pain that exists across the country due to the state of our national leadership.”

“These writers despair not just for the chaos emanating from the White House, but for the moral vandalism that has been set loose in our culture, as well as the seeming disregard for the institutions of American democracy. The damage to our democracy seems to come daily now, most recently with the president’s venting late last week that if he had his way, he would hijack the American justice system to conduct political prosecutions — a practice that only happens in the very worst places on earth. And as this behavior continues, it is not just our politics being disfigured, but the American sense of well-being and time-honored notions of the common good.”

“A group of Democratic senators is set to huddle with a top White House official to discuss potential changes to the Republican tax plan Tuesday,” the Washington Post reports.

“What, if any, substantive change to the emerging proposals might come out of the meeting is unclear — but it will allow the White House and the moderate Democrats to claim they’re at least trying to forge bipartisan consensus.”

“A record number of people signed up for Obamacare in the first few days of open enrollment this year compared to the same period in previous years,” The Hill reports.

“The surge in sign-ups, which was confirmed by an administration official, comes despite fears from Democrats that enrollment would fall off due to the Trump administration’s cutbacks in outreach and advertising.”

Is this, then, the case for optimism? That we have installed a would-be autocrat in the White House, but luckily, he is too limited to achieve his goals, too distractible to pursue his ends? https://t.co/rG7aE9nicO

Washington Post columnist E. J. Dionne, Jr. explains the stakes in tommorrow’s election for Governor of Virginia: “A Northam victory would send a signal to the country that President Trump is a severe drag on the GOP, especially if it were combined with Democratic pickups in the legislature. This would bolster the forces trying to contain Trump’s abuses and give heart to those doing the organizing work against him at the grass roots…It would tell Republicans in Congress that coddling and imitating Trump carry a high cost while strengthening Democratic efforts to recruit strong candidates for the 2018 midterms…A win by Gillespie would convey exactly the opposite message. It would ratify the Republican candidate’s vile and dishonest campaign tying Northam to felons and criminal gangs. This, in turn, would lead to more ugly racial and anti-immigrant appeals by GOP candidates next year. The party would decide that playing around with a few of Trump’s more hateful themes was the way to go…Gillespie decided he could win only by injecting Trump’s poison into his campaign. The antidote to noxious politics of this sort is to defeat it.”

A new CNN poll finds just 36% say they approve of the way President Trump is handling his job, worse by one percentage point than his previous low of 37%, reached in October.

Disapproval has also reached a new high at 58%, with 48% saying they strongly disapprove of the way he is handling his job.

Also interesting: 59% say they think Trump himself knew that his campaign had contact with suspected Russian operatives.

Government funding fight gives Democrats the power to protect the DREAMers. They should use it, via @julissaarce: https://t.co/go3CV2IXDV