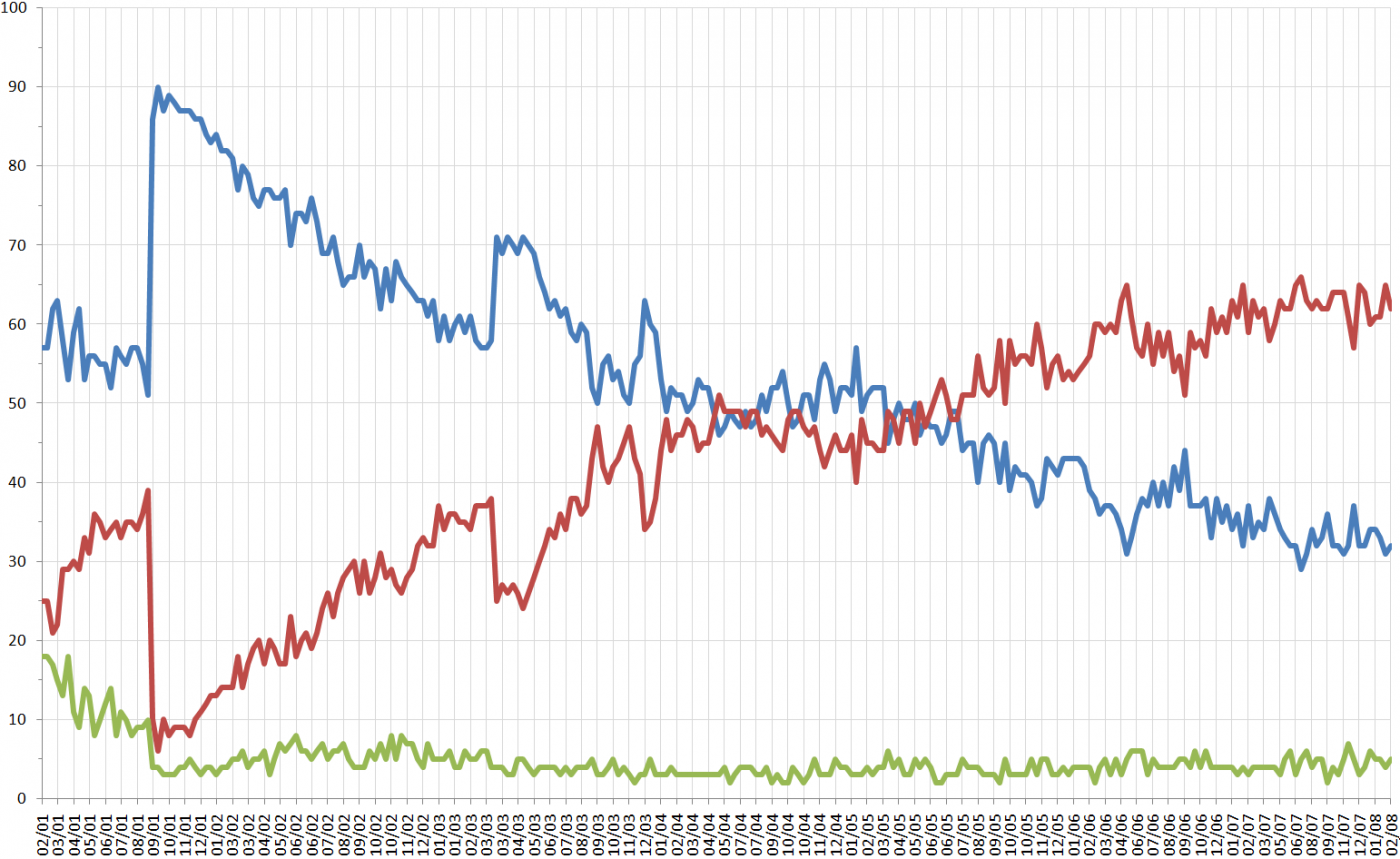 “Voters say they prefer Democratic candidates for the House of Representatives over Republicans by the widest margin in over a decade, according to a new Washington Post-ABC News poll — a fresh sign of trouble for the GOP majority one year before the midterm elections.”

“But Democrats’ effort to convert widespread disapproval of President Trump into victories in 2018 could be undercut by lower turnout, with Republicans expressing just as much motivation to vote in next year’s elections.”

“A slim 51% majority of registered voters say that if the election were held today, they would vote for or lean toward the Democratic candidate in their congressional district, while 40% say they would choose the Republican. That’s the biggest spread in a Post-ABC survey since October 2006, just weeks before a midterm in which Democrats won back control of the House and Senate amid deep dissatisfaction with then-President George W. Bush and the Iraq War.”

A new Monmouth poll in Virginia finds Ralph Northam (D) up a negligible two points against Ed Gillespie (R), 47% to 45%.

“The current results confirm a trend noted in last month’s poll: the race has become an appeal to each party’s base. The two candidates have solidified support in their regional strongholds leaving the Commonwealth’s central region as the kingmaker. At the same time, voters have soured on the tone the campaign has taken in the last six weeks.”

The RealClearPolitics polling average shows Northam with a three-point lead.

A careful reading of the new Washington Post/ABC News poll, conducted 10/29 to 11/1, indicates that a majority of “non-college,” white respondents say Trump’s tax bill favors the rich and he is trying to sabotage the Affordable Care Act. Further, they don’t believe Trump understands them. When you explore the data and clickable sub-topics, here are a few of the more revealing data nuggets you will find:

Responding to the question, “Do you think Trump understands people like you, or not?,” 44 percent of white, non-college adults say “Yes,” while 55 percent say “No.”

Clearly, the stereotype of white working-class voters as gullible Trump supporters is grossly over-stated, particularly with respect to women. Democrats don’t have to persuade a majority of white working-class voters that Trump opposes their interests; That is already accomplished. The challenge is doing all that can be done to get them to the polls and urging them to vote their convictions.

Nate Cohn: “A year after polls broadly overestimated Hillary Clinton’s strength in the decisive Rust Belt battleground states, top pollsters and analysts across the survey industry have reached a broad near-consensus on many of the causes of error in the 2016 presidential election. But so far, public pollsters — typically run by news outlets and colleges — have not changed much about their approach. Few if any of the public pollsters that conducted surveys ahead of Tuesday’s elections for governor in Virginia and New Jersey appear to have adopted significant methodological changes intended to better represent the rural, less-educated white voters who pollsters believe were underrepresented in pre-election surveys.”

“On the other hand, private pollsters — typically employed by campaigns and parties — have already begun to make changes. This is especially true among Democrats stunned by Donald Trump’s upset victory, but Republicans are making changes as well. The adjustments are already playing out in Virginia, where pollsters will have one of their first chances to put postelection shifts to the test.”