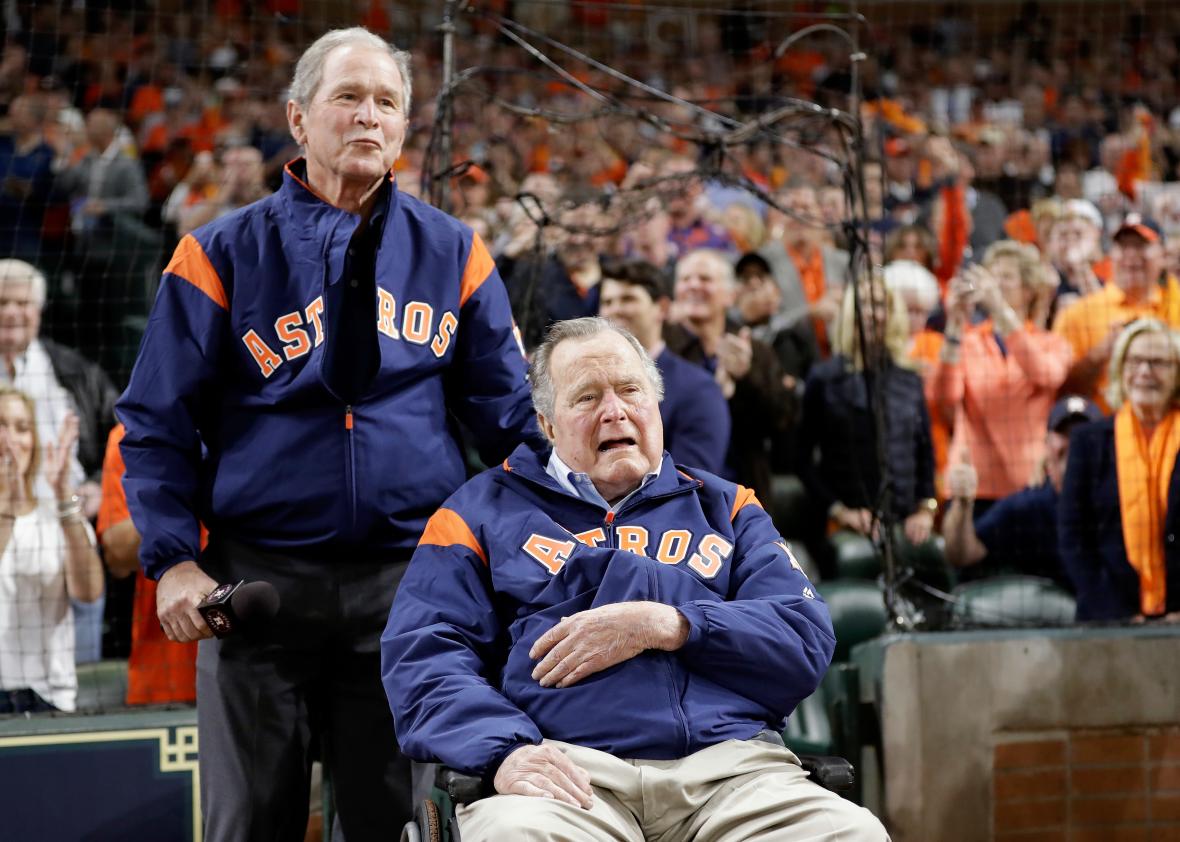 “And both worry that Mr. Trump has blown up a Republican Party that they spent two lifetimes building, a party that was once committed to removing boundaries to trade and immigration, promoting democracy and civil society and asserting a robust American leadership role in the world, according to an author who has interviewed them.”

The Trump White House didn’t stay quiet, saying that “[i]f one Presidential candidate [Trump] can disassemble a political party, it speaks volumes about how strong a legacy its past two presidents really had,” the White House wrote in a statement to CNN.  The White House went on to call Bush’s decision to invade Iraq, “one of the greatest foreign policy mistakes in American history.”

God.  I feel so unclean.  I agree with Trump in part (that last sentence there), and with both Bushes.

"The chant at the rallies was 'lock her up!' not 'allow multinational companies to repatriate foreign profits tax free!'” https://t.co/HN9mBzfkrA

Sen. Bob Corker (R-TN) said Friday that President Donald Trump’s lamentation that “I’m not supposed to be involved with the FBI,” and his implied threat to fire Attorney General Jeff Sessions if he did not do Trump’s political bidding, were “totally inappropriate.”  Corker was responding to Trump’s statement that “I don’t know” whether Jeff Sessions would be fired if the attorney general didn’t focus federal law enforcement’s energies on investigating Democrats.

“Like me, most Americans hope that our justice system is independent and free of political interference,” Corker said in a statement. “President Trump’s pressuring of the Justice Department and FBI to pursue cases against his adversaries and calling for punishment before trials take place are totally inappropriate and not only undermine our justice system but erode the American people’s confidence in our institutions.”

Bloomberg: ‘The draft House tax plan is going nowhere in the Senate as written.

The legislation to enact $1.41 trillion worth of tax cuts would run afoul of a Senate budget rule without substantive changes that would either raise more government revenue or scale back some of the benefits directed toward businesses and individuals, according to experts on Senate procedures.

“This bill would not become law as is,” said Marc Goldwein, policy director at the Committee for a Responsible Federal Budget.’

CBS: “Less than a week after two top former Trump campaign officials were indicted and another adviser to the campaign had already pleaded guilty to lying to the FBI, the pressure on others under scrutiny appears to be growing.  One source whose actions during the 2016 election are being examined by the special counsel’s office and who is reluctant to talk publicly tells CBS News, “It’s every man for himself.”

Trump promised to close the "hedge-fund loophole” during his campaign.
The Republican's tax bill doesn't touch it. https://t.co/8GTO32qONU

Dave A. Hopkins at Honest Graft asks “Why Do People Think Tax Reform Will Swing the 2018 Election?”

“If there is an actual iron law of politics, it’s that few benefits are unaccompanied by corresponding costs and that trade-offs and paradoxes abound. (Hence the seemingly oxymoronic title of this blog.)

Sometimes Congress does little and voters reelect its members anyway; sometimes it does a lot and voters respond by rebelling. Democrats produced a series of major legislative initiatives in 2009–2010 and were “rewarded” with the enduring loss of their congressional majority. Republicans adeptly harnessed popular resentment against Barack Obama to win control of the House of Representatives in 2010 and the Senate in 2014, but that same resentment led to the rise of a troublesome Tea Party movement and the installation of an unusually unpopular and ineffective president as party leader. And it is that president, not their own legislative record (or lack thereof), that represents the biggest impediment to Republican electoral success in 2018.”

This is just a sampling of the racist mailers Republicans are sending to voters across the country. Not a single Republican has repudiated. pic.twitter.com/w2q7m2WH7P

Robert Borosage at The Nation says The GOP Tax Bill Is an Attempt to Destroy Government:

“The House Republican tax bill has been introduced, packaged beautifully with lies. Now House Republicans will push to pass, in one week, a 500-page bill written in secret that transforms the tax code. Powerful special interests will spend millions for and against. Legions of lobbyists will fill congressional offices. Experts will duel over the effects. Trump is already boasting about “a great Christmas present” of the biggest tax cuts ever.

American corporations and American citizens are not overtaxed, compared with other industrial nations. The greatest impediment to corporate competitiveness isn’t what corporations pay in taxes; it is an inefficient, outdated, and increasingly dangerous infrastructure. It is time wasted in traffic jams, slow trains, and overcrowded airports. Our broadband is slower and costs more than that of other leaders in the industrial world. Nine percent of all bridges are rated “structurally deficient” and 40 percent are over 50 years old. Our energy and water systems are aged and fragile. A bridge falls every other day in America. The American Society of Civil Engineers estimates that our increasingly decrepit infrastructure will cost about 2.5 million jobs and $7 trillion in sales by 2025. For businesses, the best use of public dollars isn’t tax cuts for the rich and big corporations but investments in rebuilding America.Republicans hope that the fog of competing claims will cover their tracks. In the midst of the frenzy, remember one thing: this entire project is utterly wrong-headed. Few politicians dare say it, but the reality is Americans are not overtaxed. They are underserved by their government.

Similarly, America’s workers are gouged far more by inadequate and wasteful public investment than by high taxes. We pay about two times as much per capita for health care—with worse results and leaving millions of people still not covered. […]”

An incredible few grafs to digest, even if you've been closely following Trump's comments on the Justice Department: https://t.co/0uhzzEhB4J pic.twitter.com/oYe6WWpjFm

Dana Milbank runs down the menu of lies conservative billionaires are serving on on the tax plan.

“What’s in it for you?” asks a new ad, reportedly backed by $10 million, from the “45 Committee,” founded by Adelson and Ricketts. Axios, in a report “presented by Koch Industries,” says the 45 Committee will spend “at least $10 million” on the ad. “The Republican tax cut saves middle class families more than $1,200 a year, according to independent analysis. The first $24,000 of your income would be tax free,” the announcer says, over images of a factory floor. “It will simplify your taxes and close loopholes so everybody pays their fair share. More money in your pocket. A stronger economy. That’s what’s in it for you.”

Then there’s the Koch-funded Americans for Prosperity ad in which a young woman speaks earnestly. “The powerful, the well-connected, the politicians — they’ll stop benefiting from a rigged system,” says this ad, paid for by the powerful and well-connected. “It means everyday Americans will have more to spend on what’s important to them.”

The proposal cuts corporate taxes by $1 trillion, gives $200 billion to the richest Americans in the form of estate-tax repeal and tilts the other $300 billion in cuts in favor of the wealthy. And that doesn’t take into account the hit the working class would take eventually from reduced benefits — health care, education and the like — to pay for the up to $1.5 trillion the legislation would add in debt over a decade.”

You were expecting a qualified staff? With this president? https://t.co/Fm1vVTqFh5

Senator Bernie Sanders said he would not vote for a year-end budget deal unless it offers a legislative fix to the Deferred Action for Childhood Arrivals program, which President Trump has announced he is rolling back.  Sanders became the fourth Democratic senator to take that position, joining fellow progressives Kamala Harris, Cory Booker, and Elizabeth Warren. All four are seen as potential presidental candidates in 2020.

I've been thinking about these comments Trump made. What a fabulous tribute they are to the men and women of the DOJ and the FBI! https://t.co/5c8XMZg3SP