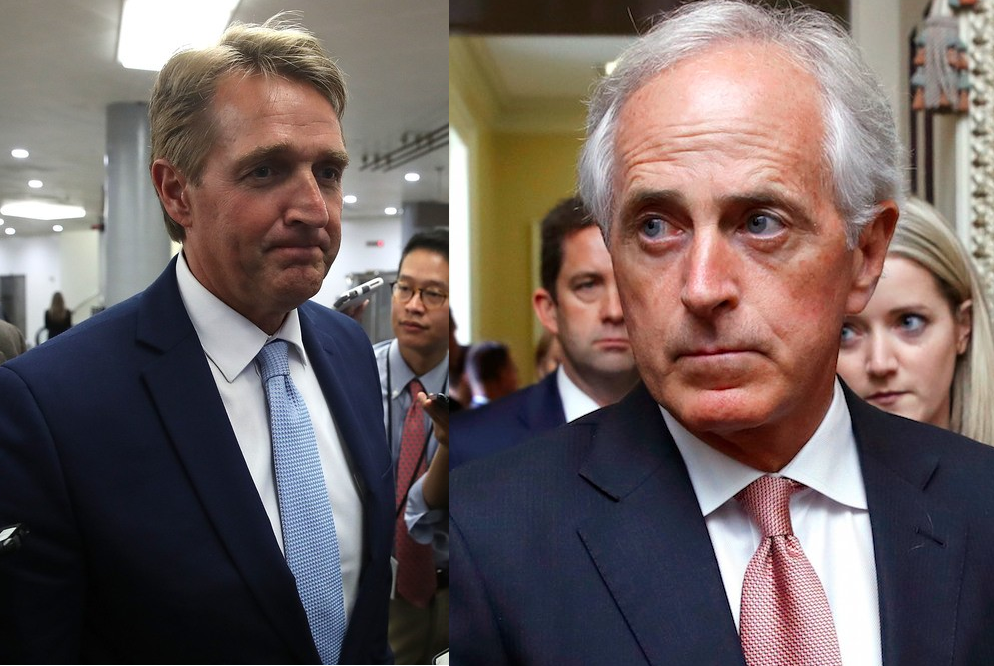 FLAKE FLAKES. “Condemning the nastiness of Republican politics in the era of President Trump, Sen. Jeff Flake (R-AZ) on Tuesday announced he will serve out the remainder of his term but will not seek re-election in 2018,” the Arizona Republic reports.  “The bombshell… will further roil Republican hopes of keeping the party’s 52-seat Senate majority in the midterm elections of Trump’s first term, when the president’s party historically loses seats in Congress.”   Flake then gave a very interesting speech in the Senate chamber.

If you want to fight against Trump and his hold on your party, why quit?   Why not go down fighting?   Ezra Klein makes the same point below, but first…

Jonathan Swan: “Flake was dead. Everybody knew it, including Republican leadership and the NRSC. The public polls showed he was going to lose badly to Kelli Ward and I’m told the internal polling wasn’t much better. The GOP has a commitment to defend incumbents but money is finite, and they’re not about to pour endless amounts of cash into a losing race. Some senior officials, including several people who considered themselves close to Flake, were blindsided by his anti-Trump book.”

In retiring, Flake is saying that the only Republicans who can speak out against Trump are those who have abandoned any hope of a political future. That's the worst message that can possibly be sent: https://t.co/yBVGL7CHi7

The Cook Political Report keeps the Arizona Senate race as a “toss up.”  “Right now, there are more questions than answers. The most important is whether an open seat will attract a first-tier candidate who is acceptable to both establishment and Trump Republicans. Other candidates will undoubtedly get into the race now, but Republicans need one who brings some gravitas and fundraising ability to the contest. Today, the identity of that candidate (or candidates) is not obvious.”

Josh Marshall:  “For all [Flake’s] criticism, he has been a very reliable vote for President Trump. But I’m still pretty stunned by this turn of events. We know Trump is a bull in a china shop. We know that he’s creating cross-cutting tensions within the GOP that are hard to navigate. We know that everyone around President Trump gets damaged. But Flake giving up his seat just makes the impact of Trump, the electoral carnage palpable and visible in an entirely new way.  […] The carnage and the stress and the destruction. There will be much more. Trump is poison. He arranges around himself, the worst and least principled sort of people. We’ll all be damaged more.

CORKER v. TRUMP, ROUND III.   Sen. Bob Corker (R-TN) gave an extraordinary interviews to various morning shows this morning, which all provoked Trump into another round of Twitter feuding with Corker.

WATCH: "Left to his own devices, do you think the president is a threat to national security?" @savannahguthrie asks @SenBobCorker pic.twitter.com/GxFFZvUTeU

Sen. Bob Corker (R-TN) unloaded on President Trump during a CNN interview, stating that Trump will be most remembered for “the debasement of our nation.”   He added: “I think at the end of the day, when his term is over. I think the debasing of our nation, the constant not truth telling, just the name calling, the things… I think the debasement of our nation will be what he’ll be remembered most for and that’s regretful.”   Corker also said that he “would not” support Trump again, though he stopped short of saying that Trump should be removed from office.

TN Republican Sen. Bob Corker on Pres. Trump: “The President has great difficulty with the truth on many issues.” https://t.co/wsl0PjVhSK pic.twitter.com/1LYS8R9VW8

President Trump tweeted that Sen. Bob Corker (R-TN) “couldn’t get elected dog catcher in Tennessee” and is now fighting the president’s tax reform plan.   He added: “Corker dropped out of the race in Tennessee when I refused to endorse him, and now is only negative on anything Trump. Look at his record!”  Corker responded: “Same untruths from an utterly untruthful president.”

Jonathan Chait: “Republicans have 52 votes in the Senate. Minus McCain and Corker, they have zero margin for error. They would need every other vote, including Susan Collins’s. Trump may believe that his social-media bullying campaign is an effective way to prod recalcitrant members of his party into line. It has certainly worked many times before — his crude insults of people like Ted Cruz and Marco Rubio resulted in their eventually submitting. But Trump may not be distinguishing between young pols on the make and retiring senators who have nothing to lose.”

From GOP, estab-friendly insider: "Many GOP senators friendly to Corker are furious at his latest comments, making tax reform harder"

Ezra Klein: “Establishment conservatives agree with virtually everything Corker is saying, but the devil’s bargain they’ve made is that debasing themselves to support Trump will be worth it if they can reform the tax code and unwind Obamacare. But if they support Trump and fail to pass their agenda — as has been the case thus far — then they will have mortgaged their souls for nothing, and that will truly be unforgivable.

Meanwhile, Corker will be remembered as one of the rare Republicans who spoke out against a president whom history will hold in abysmally low regard, and his example will make his colleagues’ cowardice look all the more craven. You can see why they’re pissed.”

GOP BELIEVES MAJORITY DEPENDS ON PASSING TAX CUTS.  Playbook: “Republicans in the House are increasingly bullish that they’ll pass their tax reform bill before the Thanksgiving recess. If everything goes right, it’s possible that can happen. They have 15 legislative days before Thanksgiving.”

“Republicans also says they believe that if they get tax reform through soon, they could stop a number of lawmakers from retiring out of frustration that Congress can’t get anything done. If a bunch of House Republicans head for the exits, it will make it that much harder for the GOP to keep control of the chamber.”

“Republican operatives and top GOP officials increasingly believe the 2018 midterm elections boils down to one simple data point: if the party does not deliver on a large-scale tax cut before the election, they will lose their House majority.”

Trump may not stumble into a nuclear war, but he's setting the stage for a new era of proliferation. https://t.co/tADPJhGcL2 pic.twitter.com/itOC1hpgMy

DREAMERS DEAL?  Politico: “Key Senate Republicans have begun privately discussing the contours of an immigration plan to shield the hundreds of thousands of Dreamers who will lose work permits and deportation protections starting early next year.”

“Preliminary talks show that influential GOP senators are eager to devise a legislative fix for Deferred Action for Childhood Arrivals that could pass muster with both Democrats and President Trump, who said he will start winding down the Obama-era program in March to force lawmakers to come up with a permanent DACA measure with significant border security and enforcement provisions attached.”

If you believe that inequality and middle class stagnation empowers Trumpist populists, tax policy like this creates a kind of doom loop: more inequality and stagnation leading to more resentment for the Trumps of the world to leverage: https://t.co/1wEx2GiDFC

ZINKE CORRUPTION.  “Interior Secretary Ryan Zinke has directed millions of dollars in political contributions since 2014 to a network of Washington operatives that prominent conservatives have accused of profiting by misleading donors,” Politico reports.

“Beneficiaries of Zinke’s largesse include groups linked to Washington-area political operative Scott Mackenzie, organizer of a Virgin Islands GOP political action committee that hosted the secretary at a St. Croix fundraiser in March. Before that, when Zinke was a Republican congressman from Montana, his political operation steered significant portions of its spending to a handful of Washington, D.C.-area consulting firms that also have had ties to Mackenzie and his associates.”

He was also responsible for this:

A tiny, two-year-old energy company from a small town in Montana won a $300 million contract to fix Puerto Rico’s hurricane-ravaged power grid, raising concerns about the decision-making behind the lucrative deal and the company’s ties to people connected to the Trump administration, as well as the company’s ability to fully meet Puerto Rico’s recovery needs.

“Fuck no, I’m not running for Senate. Are you kidding me?”  — Kid Rock, quoted by the Detroit Free Press, adding that fueling speculation has been “the most creative thing I’ve ever done.”

A discussion about where Trumpism comes from and how the Republican Party lost its mind https://t.co/ifo7lh22RT

Molly Ball follows members of the Third Way, a center-left think tank, on a postelection listening tour: “The trip was predicated on the optimistic notion that if Americans would only listen to each other, they would find more that united than divided them. This notion—the idea that, beyond our polarized politics, lies a middle, or third, path on which most can come together in agreement—is Third Way’s raison d’être. It is premised on the idea that partisanship is bad, consensus is good, and that most Americans would like to meet in the middle.

But these are not uncontested assumptions. And, three days into their safari in flyover country, the researchers were hearing some things that disturbed them greatly—sentiments that threatened their beliefs to the very core.”

Bill Browder is one of Putin's biggest critics. The US just revoked his visa. https://t.co/OlEbVCjidz

“Two powerful House Republican chairmen announced Tuesday that they would jointly investigate the Justice Department’s handling of its 2016 Hillary Clinton investigation — a potential counter-punch to the FBI’s probe of the Trump campaign’s Russia connections,” Politico reports.

“House Judiciary Committee Chairman Bob Goodlatte and House Oversight and Government Reform Committee Chairman Trey Gowdy said they have a host of questions about the FBI’s probe of Clinton’s treatment of classified information.”