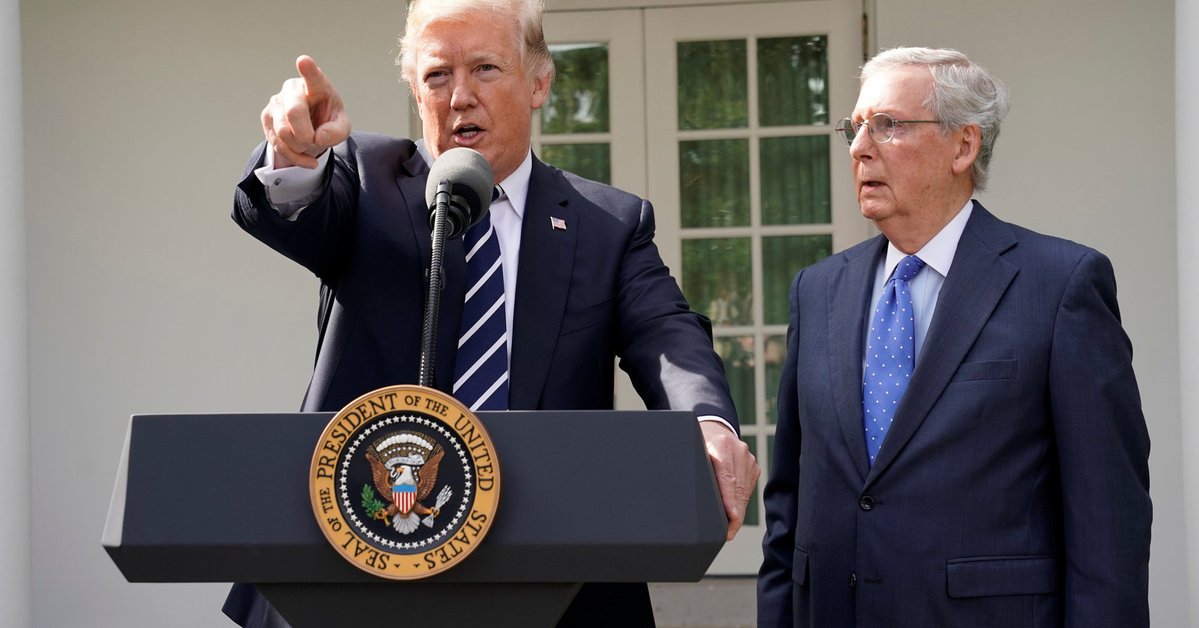 Caption contest!  The look of horror on McConnell’s face is just priceless.    “Friends say President Trump has grown frustrated that his greatness is not widely understood, that his critics are fierce and on TV every morning, that his poll numbers are both low and ‘fake,’ and that his White House is caricatured as adrift,” Politico reports.

“So on Monday, the consummate salesman—who has spent his 71 years selling his business acumen, golf courses, sexual prowess, luxury properties, and above all, his last name—gave the Trump White House a Trump-sized dose of brand enhancement.”

“With both the Roosevelt Room and Rose Garden as backdrops, he mixed facts and mirage, praise and perfidy in two head-spinning, sometimes contradictory performances designed to convince supporters and detractors alike that everything’s terrific, moving ahead of schedule and getting even better. His opponents were cast as misguided, deluded or even unpatriotic.”

President Trump falsely asserted that Barack Obama and other presidents did not contact the families of American troops killed in duty, the New York Times reports.

“Mr. Trump’s assertion belied a long record of meetings Mr. Obama held with the families of killed service people, as well as calls and letters. Mr. Obama regularly traveled to Dover Air Force Base in Delaware to greet the caskets of troops, a ritual that began early in his presidency before he decided to deploy 30,000 troops to Afghanistan.”

that's a fucking lie. to say president obama (or past presidents) didn't call the family members of soldiers KIA – he's a deranged animal.

Ben Rhodes, Obama’s former deputy national security adviser, called the statement “an outrageous and disrespectful lie.”  And Pete Souza, the former Obama photographer who has emerged as an epic troller of the liar Trump, posted this:

The President and First Lady console Paul and Janet, parents of Army Sgt. 1st Class Jared C. Monti, who had just been awarded posthumously with the Medal of Honor for his actions in Afghanistan. This was the first of 52 Medals of Honor, the nation’s highest award for military valor, that President Obama bestowed during his two terms. I also photographed him meeting with hundreds of wounded soldiers, and family members of those killed in action.

Josh Marshall asks why?  “Why did President Trump make up this lie about President Obama not calling the families of bereaved soldiers? […] It seems hard to believe that he didn’t come up with this because he had no good explanation for the fact that he’s gone more than a week without making any contact with the families or even making any public statement on what happened.”

The lying fucktwit of a dotard racist was cornered.  He is a narcissistic sociopath who has not called or written those families, so he lied and he blamed the person he hates the most to make himself look better.

“The Canadian man who was held hostage with his family by the Taliban for five years thought his captors were kidding when they told him Donald Trump was president,” the New York Post reports.  Said Joshua Boyle: “It didn’t enter my mind that he was being serious.”

President Trump said that he would try to talk his former top strategist, Steve Bannon, out of backing primary challenges against at least some incumbent Republican senators, the Los Angeles Times reports.  Said Trump: “Steve is doing what Steve thinks is the right thing. Some of the people that he may be looking at, I’m gonna see if we can talk him out of that.”

Wow. This :“They have an on-the-record ‘Dear Leader’ culture, and an on-background ‘This-guy-is-a-joke’ culture,” https://t.co/hfoY1WALzw

Washington Post: “When Sen. Bob Corker (R-TN) described the White House as ‘an adult day-care center’ on Twitter last week, he gave voice to a certain Trumpian truth: The president is often impulsive, impetuous and difficult to manage, leading those around him to find creative ways to channel his energies.”

“Some Trump aides spend a significant part of their time devising ways to rein in and control the impetuous president, angling to avoid outbursts that might work against him, according to interviews with 18 aides, confidants and outside advisers, most of whom insisted on anonymity to speak candidly.”

Gregg Popovich, coach of the San Antonio Spurs, was so outraged at Trump today that he called Dave Zirin to let off some steam.

“I’ve been amazed and disappointed by so much of what this President had said, and his approach to running this country, which seems to be one of just a never ending divisiveness. But his comments today about those who have lost loved ones in times of war and his lies that previous presidents Obama and Bush never contacted their families, is so beyond the pale, I almost don’t have the words…

This man in the Oval Office is a soulless coward who thinks that he can only become large by belittling others. This has of course been a common practice of his, but to do it in this manner–and to lie about how previous Presidents responded to the deaths of soldiers–is as low as it gets. We have a pathological liar in the White House: unfit intellectually, emotionally, and psychologically to hold this office and the whole world knows it, especially those around him every day. The people who work with this President should be ashamed because they know it better than anyone just how unfit he is, and yet they choose to do nothing about it. This is their shame most of all.”

“It must be cold and miserable standing in the shadow of someone greater and smarter, more loved and more admired. It must be infuriating to have risen on the wings of your derision of that person’s every decision, and even his very existence, and yet not be able to measure up — in either stratagem or efficacy — when you sit where that person once sat. This is the existence of Donald Trump in the wake of President Barack Obama. Trump can’t hold a candle to Obama, so he’s taking a tiki torch to Obama’s legacy. Trump can’t get his bad ideas through Congress, but he can use the power of the presidency to sabotage or even sink Obama’s signature deeds.

In fact, if there is a defining feature of Trump as “president,” it is that he is in all ways the anti-Obama — not only on policy but also on matters of propriety and polish. While Obama was erudite, Trump is ignorant. Obama was civil, Trump is churlish. Obama was tactful, Trump is tacky.  There is a thing present in Obama and absent from Trump that no amount of money or power can alter: a sense of elegant intellectualism and taste.”

Jonathan Chait: “The last time Republicans had control of government, they explained that cutting taxes would not get in the way of fiscal responsibility. Not only would tax cuts produce faster growth, they argued, they would also force Congress to restrain spending. Their strategy utterly failed. Not only did the tax cuts fail to produce higher growth, they also failed to encourage spending restraint…”

“And so there they are, back to the exact same policy they tried in 2001: Pass a huge tax cut and hope somehow it leads to cutting spending. That this policy is now being carried out by the same people who rose to power by denouncing the failure of the exact same policy last time tells you everything you need to know about the state of economic policy thought in the Republican Party now.”

“In more than a dozen interviews, Republicans inside and outside the White House told CNN conversations are ramping up behind the scenes about whether Trump fully grasps that his feuds with members of his own party and shortage of legislative achievements could soon put the fate of his presidency at risk.”

“Donors who trekked to Jackson Hole, Wyoming, in support of House Speaker Paul Ryan were treated to a slide show late this summer to fundraise off those very fears, according to multiple attendees. Among the slides: An overview of the Democrats who would be tapped to lead key committees if the GOP loses control, including Rep. Elijah Cummings as the head of the House Oversight Committee.”

“To some attendees, the subtext was clear. If Republicans forfeit the House, Democrats will almost certainly create a spectacle that will derail conservatives’ agenda and the remainder of Trump’s first term — a spectacle complete with a raft of new subpoenas, a spotlight on the Russia investigation and, many are convinced, impeachment proceedings.”

Forbes on Wilbur Ross’ missing billions: “What he left unsaid, however, was that between the November election and January inauguration, he had quietly moved a chunk of assets into trusts for his family members, leaving more than $2 billion off of his financial disclosure report—and therefore out of the public eye. Ross revealed the existence of those assets, and the timing of the transfer, when Forbes asked why his financial disclosure form listed fewer assets than he had previously told the magazine he owned.”

“The hidden assets raise questions about whether the Secretary of Commerce violated federal rules and whether his family owns billions in holdings that could create the appearance of conflicts of interest.”

“Federal law requires incoming cabinet members to disclose assets they currently own, as well as any that produced income during the current and previous calendar years, even if they no longer own the assets. Ross says he followed all rules. But how someone could apparently hold $2 billion in assets, without producing big income that would show up on a financial disclosure report, raises more questions than answers.”

New York Times: “Mr. Flake is perhaps the most endangered Senate Republican, with an approval rating in one recent poll of just 18 percent among Arizonans. Mr. Trump has savaged Mr. Flake as ‘toxic’ and a ‘flake,’ and has encouraged a primary challenge against him that has left the senator squeezed not only from the left but also the right. His fate is an object lesson for other Republicans who might consider voicing dire thoughts about the president’s fitness: Cross Mr. Trump, and your political career could well be over.”

I was recently sent a bill for a 3-year-old’s MRI.