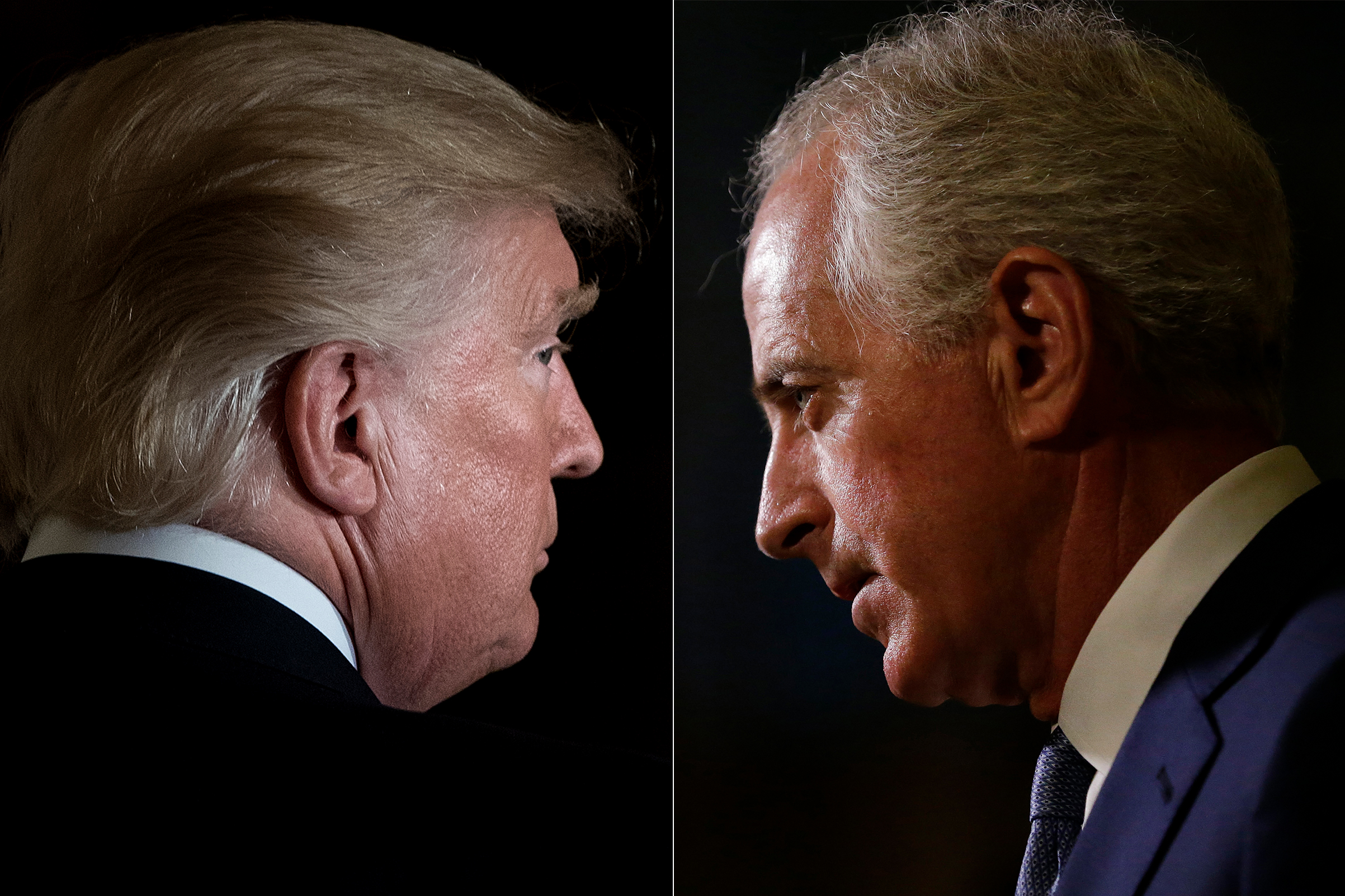 Sen. Bob Corker (R-TN), “who publicly laid into Trump earlier this week on Twitter by saying the White House had become an ‘adult day care center,’ slammed the president by saying he was undermining Secretary of State Rex Tillerson and creating scenarios in which the United States might be forced to choose between waging war on North Korea or Iran or allowing those countries to threaten the U.S. with nuclear weapons,” Politico reports.

Said Corker: “You cannot publicly castrate your own secretary of state without giving yourself that binary choice.”

He added: “When you jack the legs out from under your chief diplomat, you cause all that to fall apart. Us working with Beijing effectively is the key to not getting to a binary choice. When you publicly castrate your secretary of state, you take that off the table.”

Trump is bragging that he caused health care stocks to drop… after creating a lose-lose-lose situation. https://t.co/CgunZrpORA

President Trump “lit a fuse this week that will blow a hole in the Affordable Care Act, but the collateral damage could very well include fellow Republicans,” the Boston Globe reports.

“The step also heightens the risk that Republicans will be blamed for higher costs and other market disruptions stemming from Trump’s administrative assaults on the health care law, which was President Obama’s signature accomplishment.”

"In the face of his own unhappiness, the president is trying to raise the pain level wherever he can." https://t.co/4Fztye6CUX

“President Trump and Republican leaders have positioned a proposed repeal of the estate tax as a way to help farmers, ranchers and small business owners. But on Friday, Steven Mnuchin, the Treasury secretary, offered a significant concession about who would benefit the most if the so-called death tax disappears: the rich,” the New York Times reports.

“Mr. Mnuchin said the estate tax should be eliminated for both philosophical and economic reasons. He said that many taxpayers give the government half their income during their lives and that they should not have to give away a big chunk when they die — even if their families are wealthy.”

Today, @realDonaldTrump is playing golf while 91% of Puerto Rico is still without power and 36% still don’t have running water. pic.twitter.com/xbzgg7U6Gj

“A close associate of Donald Trump’s former national security adviser Michael Flynn arranged a covert investigation into Hillary Clinton’s use of a private email server when she was secretary of state, and through intermediaries turned to a person with knowledge of the ‘dark web’ for help,” the Guardian reports.

“Flynn is personally and ideologically linked to Barbara Ledeen, a longtime conservative activist who works for the Republican senator Chuck Grassley on the Senate judiciary committee – which is now investigating alleged links between the Trump campaign and Russia.”

“Ledeen’s name was redacted on the FBI documents describing the investigation, which were released last year in response to a Freedom of Information Act request. But a person who reviewed the unredacted documents confirmed to the Guardian that Barbara Ledeen was the subject. Her involvement was also confirmed by the Senate judiciary committee in response to the Guardian’s questions.”

Via @brianbeutler, if Rs truly believe Trump is unfit, that confers an obligation to do something about it: https://t.co/B2Ef3oMaLA

New York Review of Books: “After the racist violence in Charlottesville and Trump’s incendiary comments about it, the leaders of America’s five military services—that is, the individual members of the Joint Chiefs of Staff—published statements condemning racist hatred. They had strong and legitimate military reasons to do so, in order to make certain there was no racial upheaval among the troops. Nevertheless, it was a little unsettling. In the past, America did not have to rely upon its military leaders to calm passions or make soothing statements, because those are the sorts of things that usually come from presidents and top civilian leaders. Such statements raise, momentarily, the specter of countries like Turkey or Egypt or Thailand, where the military assumes an obligation to step in for the good of the country when civilian governments have collapsed.”

“For now, such comparisons seem remote. But what has been most disturbing this year is the subtle link that is being created in American consciousness between the phrases ‘military leaders’ or ‘generals’ and the phrases ‘adults’ or ‘grownups in the room.’ Having military figures act as ‘adults’ may somehow suggest that civilians lack the capacity to govern on their own, or even that civilians act like children. That, in Trump’s case, would be sadly accurate.”

“The NFL said it has no plans to mandate players stand for the U.S. national anthem, but will rather present a possible solution on how to end the controversial protests when it meets with team owners next week,” Reuters reports.

Said spokesman Joe Lockhart: “Commissioner Roger Goodell has a plan that he is going to present to owners about how to use our platform to both raise awareness and make progress on issues of social justice and equality in this country. What we don’t have is a proposal that changes our policy, we don’t have something that mandates anything. That’s clear. If that was the case I doubt the head of the NFLPA would have put a joint statement out with us.”

The Guardian: “What has now been made clear is that Russian trolls and automated bots not only promoted explicitly pro-Donald Trump messaging, but also used social media to sow social divisions in America by stoking disagreement and division around a plethora of controversial topics such as immigration and Islamophobia.”

“And, even more pertinently, it’s clear that these interventions are continuing now as Russian agents stoke division around such recent topics as white supremacist marches and NFL players taking a knee to protest police violence.”

“The overarching goal, during the election and now, analysts say, is to expand and exploit divisions, attacking the American social fabric where it is most vulnerable, along lines of race, gender, class and creed.”

Sen. Ted Cruz (R-TX) warned that Republicans could face a “Watergate-level blowout” in the midterm elections if they don’t make major legislative strides on taxes and health care, the Washington Post reports. Said Cruz: “If tax reform crashes and burns, if on Obamacare, nothing happens, we could face a bloodbath.”

Politico: “Twitter has deleted tweets and other user data of potentially irreplaceable value to investigators probing Russia’s suspected manipulation of the social media platform during the 2016 election… Federal investigators now believe Twitter was one of Russia’s most potent weapons in its efforts to promote Donald Trump over Hillary Clinton.”

“By creating and deploying armies of automated bots, fake users, catchy hashtags and bogus ad campaigns, unidentified operatives launched recurring waves of pro-Trump and anti-Clinton story lines via Twitter that were either false or greatly exaggerated.”

“As social democrats break through in "red" places like Birmingham, the nat’l media is getting the story all wrong” https://t.co/3rrB43dQ8Z

“House Republicans are moving closer to keeping some form of the state and local tax deduction, and President Donald Trump isn’t standing in the way, signaling a possible breakthrough in an early spat over tax reform. Several lawmakers who huddled with GOP leaders Thursday indicated that the talks were going well,” Politico reports.

Wall Street Journal: “The aim, lawmakers say, is to keep the break for middle-income households while repealing it for higher-income households. One idea is to cut off the deduction for households whose incomes exceed a certain level. The challenge will be finding agreement on where that dividing line should be.

Politico: “Republicans are worried about Thad Cochran. The Mississippi senator has been recovering the past several weeks from a urological procedure. And concern is growing on and off Capitol Hill over whether the 79-year-old lawmaker will return to work on Monday when the Senate comes back from recess — not to mention how long he’ll be able to continue leading a high-profile committee or even remain in the Senate. Multiple sources close to the senator said his staff and allies have received limited information from his family about his health status, further fueling questions about his future.”

“Cochran’s office maintains that the Mississippi Republican will return next week as planned, and Senate Republican aides said they expect him back as well. But several K Street sources and Cochran allies said he’s unlikely to be back next week. Multiple sources said there’s increasing worry his absence could stretch through the end of the year.”

How Elizabeth Warren became the soul of the Democratic Party: https://t.co/eEZSvy25C6 pic.twitter.com/YDaJIyLrDL

The Washington Post found that “17 teams from across the four major sports had stayed at Trump properties in recent years. Now, at least 16 are no longer customers.”

“The Post reached out to all 123 teams in the four major U.S. sports leagues to find out how many are still Trump customers. A total of 105 responded. Not a single team confirmed its players stay at Trump properties.”