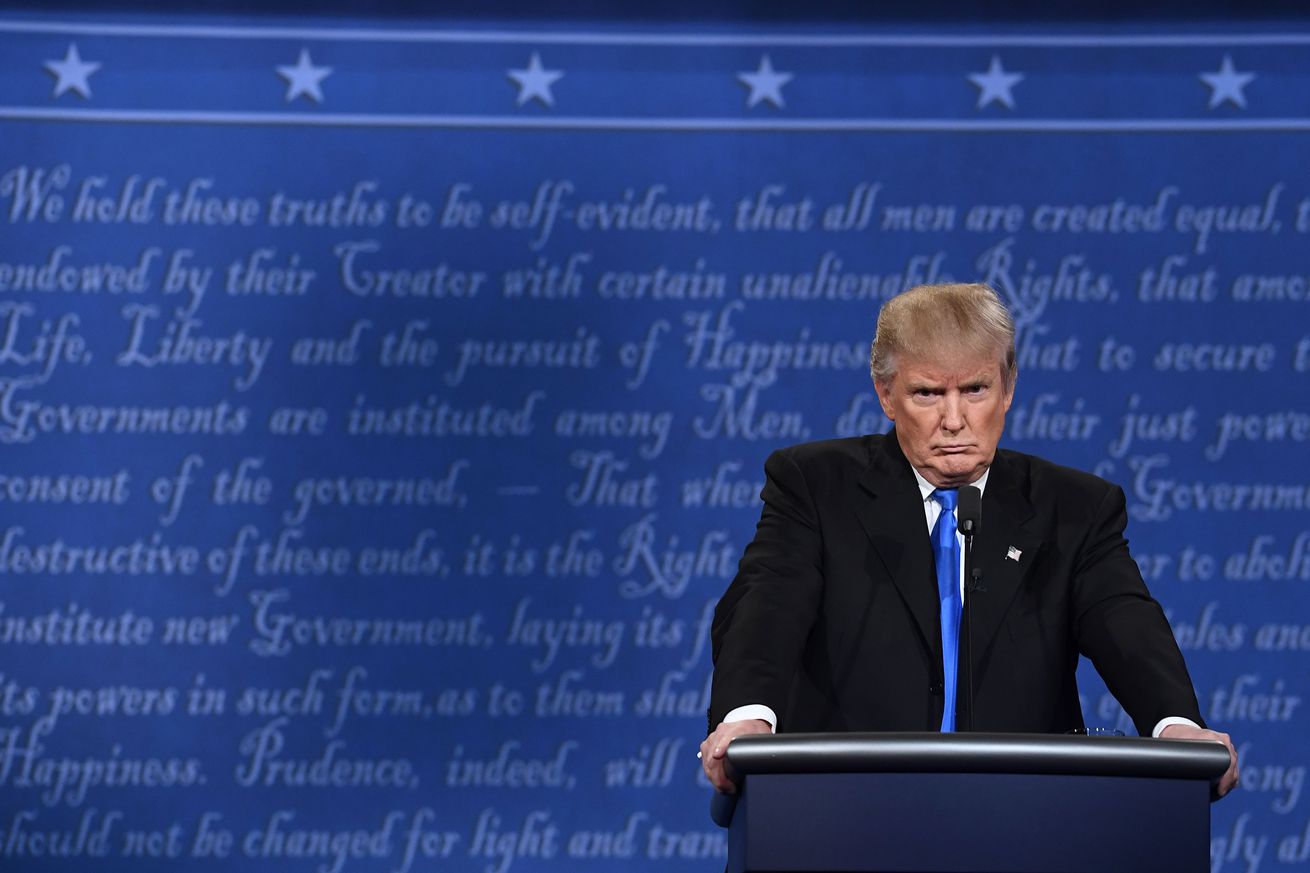 “The owners of the NFL are reportedly considering a rule change that would make it mandatory for players to stand during the national anthem,” CNBC reports.  “A league spokesman said that the owners would discuss the potential change during a meeting next week.”  Nice way to give into the demands of a fascist.

In a new feature, @jonathanchait tries to chronicle a presidency that feels like it cannot keep going on https://t.co/w5KYLvL1lf

TRUMP V. TILLERSON, DAY FIVE: He can’t let anything go:  “President Donald Trump is challenging Secretary of State Rex Tillerson to “compare IQ tests” if Tillerson did indeed ever call Trump a “moron” as reported.  Trump tells Forbes magazine: “I think it’s fake news. But if he did that, I guess we’ll have to compare IQ tests. And I can tell you who is going to win.”

Ok, first, a smart President would want to move the press on from an alleged spat between his highest ranking cabinet secretary, rather than keep it alive for another two to three media cycles.  Second, he called you a fucking moron, Donald.  A smart person would remember that.  Third, Tillerson would beat him.

TRUMP V. CORKER, DAY FOUR: President Trump tweeted that the New York Times set up Sen. Bob Corker (R-TN) up by recording his recent interview with the newspaper.  Said Trump: “Was made to sound a fool, and that’s what I am dealing with!”  However, reporter responded that Corker’s staff also recorded the conversation and were aware he was recording.

Trump also escalated his attack on Corker “by ridiculing him for his height, even as advisers worried that the president was further fracturing his relationship with congressional Republicans just a week before a vote critical to his tax cutting plan,” the New York Times reports.  “Trump gave Corker a derogatory new nickname — ‘Liddle Bob‘ — after the two exchanged barbs in recent days.”

“In labeling Mr. Corker ‘liddle,’ the president was evidently returning to a theme. He considered Mr. Corker for secretary of state during the transition after last year’s election but was reported to have told associates that Mr. Corker, at 5-foot-7, was too short to be the nation’s top diplomat.”

The trilemma from which no tax reform can escape https://t.co/WDZoGXqKrw

“The influential Judicial Crisis Network had planned on launching a $250,000 ad buy in Washington on Tuesday calling on McConnell to either change the Senate rules to jam through new judges or keep the chamber in session until Democrats relent out of fatigue, according to sources familiar with the plans. But before the ad campaign could begin, McConnell’s aides contacted the conservative advocacy group – a major ally for Senate Republicans on court battles – to defuse what a public intraparty confrontation over judicial confirmations.”

Meanwhile, “the next step in Steve Bannon’s scorched-earth war against Republican incumbents is an attempt to cut off money to those aligned with Senate Majority Leader Mitch McConnell,” CNN reports.  “The former chief strategist in President Trump’s White House spent the weekend in Connecticut meeting with top Republican donors, a source familiar with Bannon’s plans said, as he recruits financial support for enough candidates to nationalize an anti-establishment message in 2018 GOP primaries.”

SENATE MAJORITY IS NOW IN PLAY. Charlie Cook: “With 25 Democratic Senate seats up next year, ten in states Trump carried, five in states the former real estate developer won by 19 points or more, this should be a year for the GOP to expand its current narrow 52-48 majority. Under different circumstances, the GOP could hope to boost their Senate numbers by four to seven seats, perhaps even reaching the magic 60-seat Senate super-majority level that could break filibusters on party line votes. But given their current disarray, Republicans will need to fight hard to gain any new seats, and losing one or two of their own seats would put their majority in jeopardy.”

“The stakes are even higher in the House where their majority status is in real danger. The party needs to sublimate its divisions, get mainstream Republicans to the polls, and persuade the Trump base to cast ballot for non-Trump Republicans. That’s a tall order. And it’s why last week’s news reduced the odds of the GOP retaining its majority from a good bet to even money.”

Politico: “Something remarkable is happening in the halls of the Capitol: talk of a serious fight for the Senate majority next year. Senate Democrats, once all but resigned to staying in the minority until at least 2020, say the door to retaking the chamber in next year’s midterms has cracked — just barely — if everything breaks their way. And instead of boasting about how many more seats they’re about to pick up, Republicans are now pondering the once-unthinkable possibility of losing the Senate, and with it, the ability to confirm President Donald Trump’s nominees.”

Both Dems and Rs seem to think they have the leverage on DACA and White House is complicating things, explained https://t.co/RiIJFt1lzO

TRUMP THREATENS HIS OWN AGENDA. “Frustrated by his Cabinet and angry that he has not received enough credit for his handling of three successive hurricanes, President Trump is now lashing out, rupturing alliances and imperiling his legislative agenda,” the Washington Post reports.

“In a matter of days, Trump has torched bridges all around him; nearly imploded an informal deal with Democrats to protect the young undocumented immigrants brought to the country as children; and plunged himself into the culture wars on issues ranging from birth control to the national anthem.”

New York Times: “President Trump’s latest rupture with a Republican senator has widened the schism with his own party on Capitol Hill, potentially jeopardizing the future of his legislative agenda even as he presses lawmakers to approve deep tax cuts.”

Vanity Fair: “According to conversations with four prominent Republicans close to the White House, Trump has grown frustrated with Kelly in recent weeks at what he sees as Kelly’s highhandedness. ‘They’re fighting a lot,’ one source explained. The most recent flashpoint was Kelly’s decision late last month to reassign Peter Navarro, Trump’s nationalist trade adviser, to report to Gary Cohn, without first clearing it with Trump. According to two sources familiar with the matter, Navarro bumped into Trump in the West Wing and explained that Kelly had reassigned him to work for Cohn, which was news to the president. ‘Trump was like, what the fuck? He told Navarro, “You’re my guy and hang in there,”’ said a source briefed on the conversation. The source said Trump has taken up the matter with Kelly.”

“According to two sources, Kelly has developed a Mar-a-Lago strategy to prevent Trump from soliciting advice from members and friends. (In February, Trump turned his dinner table into an open-air Situation Room when North Korea test-fired a ballistic missile.) Sources briefed on Kelly’s plans said he will attempt to keep Trump ‘out of the dining room.’ The plan looks sound on paper—but, to his staff, Trump can be a formidable adversary.”

SOME CALL IT AVOIDANCE. OTHERS CALL IT COWARDICE. “Senate Republicans avoided weighing in on the fiery fracas between President Trump and Sen. Bob Corker (R-TN), and aides and allies of those lawmakers privately worried that a prolonged fight would hurt the GOP’s already threatened legislative priorities,” the Washington Post reports.  “Those who did speak did so obliquely — by praising Corker generally but steering clear of inserting themselves directly into the brutal clash.”

“The reaction highlighted the broader strategy Capitol Hill Republicans have adopted when it comes to the president’s tendency to wage rhetorical war against their own or incite other controversies: Don’t engage in public no matter how anxious they may be in private.”

“Matheson, a prominent conservative who currently runs the Salt Lake City-based Sutherland Institute think tank, would be a formidable contender should he decide to run. Matheson traveled to Washington last week, where he met with former White House chief strategist Steve Bannon and Citizens United President David Bossie. Both have emerged as leaders of an intensifying conservative campaign to oust Republican incumbents and replace them with bomb-throwing outsiders – an effort that is aimed at undermining Senate Majority Leader Mitch McConnell.”

6. I call for a larger repudiation of "dirty money" here: https://t.co/z3z2nn1tZu

CAN ANY DEMOCRAT BEAT TRUMP?: Steve Kornacki: “The narrow lens sees Clinton as a uniquely vulnerable candidate, one whose liabilities — whether deserved or undeserved — enabled Trump to win an election he had no business winning…”

“Then there’s the broader lens, through which Clinton becomes far from the only Democrat who could lose an election to Trump. In this view, Trump has pushed politics away from an ideological battleground and onto a cultural one, creating a new level of polarization that fortifies him in ways that traditional measures don’t fully capture.”

“Trump’s presidency dominates not only the news but all of popular culture, and the effect is tribalizing, a constant invitation to every American to choose camps. He antagonizes giant swaths of the country, but at the same time provokes heated reactions from his opponents that can have their own alienating effect. It’s a combination that practically ensures he has all the right enemies. Even if they have a low opinion of him, how many voters are ultimately with Trump because at least he’s fighting — the news media, Hollywood stars, activist athletes, elite culture?”

“This interpretation of Trump’s rise poses difficult questions for Democrats. It would mean that almost any candidate they run against him would be at risk of suffering Clinton’s fate.”

RAND PAUL MAYBE ANOTHER GOP NO ON THE BUDGET.  Sen. Rand Paul’s (R-KY) “outspoken opposition to a leadership-backed Obamacare repeal-and-replace bill and the backup Graham-Cassidy plan helped demolish the GOP’s health care agenda. And now Republicans are worried that the contrarian Paul is going to do the same on tax reform by coming out early and vocally against their work,” Politico reports.

Said one ally to Senate Majority Leader Mitch McConnell: “You have to assume he’s going to be a no on everything.”

“The Senate will consider the budget teeing up tax reform in mid-October, and Paul is privately sending signals he’ll vote against it, just as he did on the budget setting up Obamacare repeal in January, when he was the lone Republican senator to do so.”

TIME FOR CARTER PAGE TO SPEND SOME TIME IN JAIL FOR CONTEMPT.  “Carter Page, a former foreign policy adviser to the Trump campaign, informed the Senate Intelligence Committee that he will not be cooperating with any requests to appear before the panel for its investigation into Russian meddling in the 2016 election and would plead the Fifth,” Politico reports.

“A former naval-officer-turned-energy consultant, Page came under fire last year after reports emerged that he had met with high-level associates of Russian President Vladimir Putin in Moscow in 2016. While Page denied those meetings occurred, the Trump campaign distanced itself from the adviser not long after.”