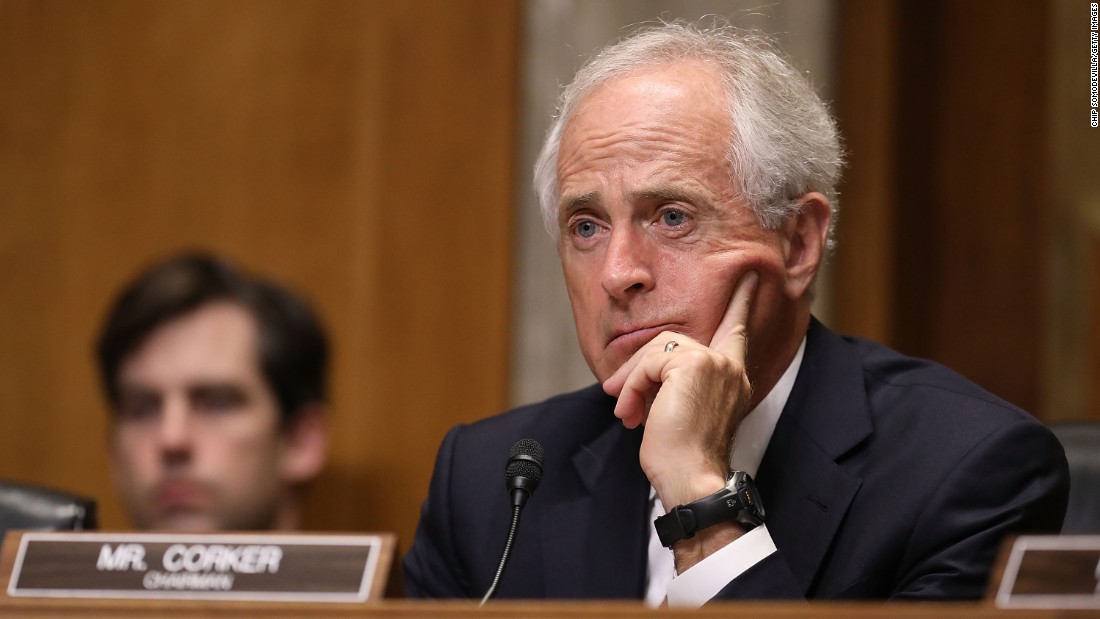 President Trump attacked Sen. Bob Corker (R-TN) in a Sunday morning Twitter tirade, alleging that the Tennessee Republican “begged” him for an endorsement, did not receive it and “didn’t have the guts” to run for reelection, the Washington Post reports.

“Trump’s public lashing of a fellow Republican comes after Corker made headlines last week when he starkly suggested that the national security team provides the president with needed adult supervision.”  Corker responded to Trump’s attacks by tweeting, “It’s a shame the White House has become an adult day care center. Someone obviously missed their shift this morning.”

CORKER (via @jmartNYT/@MarkLandler): "He concerns me. He would have to concern anyone who cares about our nation." https://t.co/gIBYFBfEsa

Sen. Bob Corker (R-TN) charged in an interview that President Trump was treating his office like “a reality show,” with reckless threats toward other countries that could set the nation “on the path to World War III,” the New York Times reports.  In an extraordinary rebuke of a president of his own party, Mr. Corker said he was alarmed about a president who acts “like he’s doing ‘The Apprentice’ or something.”  Said Corker: “He concerns me. He would have to concern anyone who cares about our nation.”

“The White House demanded that lawmakers harden the border against thousands of children fleeing violence in Central America before President Trump will agree to any deal with Democrats that allows the young undocumented immigrants known as Dreamers to stay in the United States legally,” the New York Times reports.

“Administration officials said that Mr. Trump would seek to slam shut what they described as loopholes that encouraged parents from Guatemala, El Salvador and Honduras to send their children illegally into the United States, where many of them melt into American communities and become undocumented immigrants.”

Josh Marshall: “Tonight the White House released a maximal set of demands for any deal to make DACA permanent. In fact, at least as Democrats understand the term, Trump is no longer even offering that. For that President Trump says he must have his wall funding, a crackdown on ‘sanctuary cities’, and a number of wholesale changes to the rules of immigration policy, specifically a new merit-based approach to issuing Green Cards and a focus on ‘ability to assimilate.’ There are at least half a dozen demands that are non-starters for a broad majority of Democrats – particularly Senate Democrats, which is where Trump will need some Democratic votes.”

Steve Bannon is targeting pretty much every Senate Republican up in 2018, except Ted Cruzhttps://t.co/LhzbvJq3gK

Jonathan Swan: “Steve Bannon and his allies are planning a hostile takeover of the Republican Party. And only one Senator running in 2018 will get a free pass: Ted Cruz.  Breitbart’s Washington Editor Matt Boyle writes today that conservatives are ‘running or actively seeking out’ serious primary challengers for every incumbent Republican senator running in 2018 except the Texan.”

“Erik Prince, the founder of the security contractor Blackwater, is seriously considering a Republican primary challenge for a Senate seat in Wyoming, potentially adding a high-profile contender to a fledgling drive to oust establishment lawmakers with insurgents in the mold of President Trump,” the New York Times reports.

“Mr. Prince appears increasingly likely to challenge John Barrasso, a senior member of the Senate Republican leadership, according to people who have spoken to him in recent days. He has been urged to run next year by Stephen K. Bannon, who is leading the effort to shake up the Republican leadership with financial backing from the New York hedge fund billionaire Robert Mercer and his daughter Rebekah.”

The Guardian: “Nine months after its first appearance, the set of intelligence reports known as the Steele dossier, one of the most explosive documents in modern political history, is still hanging over Washington, casting a shadow over the Trump administration that has only grown darker as time has gone by.”

“The fact that Steele’s reports are being taken seriously after lengthy scrutiny by federal and congressional investigators has far-reaching implications.”

And idiot Bernie loving leftists fell for it.

New Yorker: “In February, a few weeks after Tillerson was confirmed by the Senate, he visited the Oval Office to introduce the President to a potential deputy, but Trump had something else on his mind. He began fulminating about federal laws that prohibit American businesses from bribing officials overseas; the businesses, he said, were being unfairly penalized.”

“Tillerson disagreed… Tillerson told Trump that America didn’t need to pay bribes—that we could bring the world up to our own standards.”

This is a premeditated stunt.  Pence was in Vegas on Saturday, and was scheduled to be in California for a fundraiser for Putin’s favorite Congressman, Dana Rohrbacher, on Sunday night.  So Trump, realizing that his polling number were horrific, needed to juice his base again, conspired with Pence to set up this little stunt.  Trump ordered Pence to go to Indianapolis, where the Colts were playing the San Francisco 49ers, who have had multiple players kneeling every week since Colin Kaepernick started his protest last year.   So it was guaranteed that someone or many would kneel.   We taxpayers paid for this racist culture war stunt.  Trump and Pence have not said anything about the white Nazis demonstrating again in Charlottesville.  So white Nazis have rights, but black athletes do not.

Stan Collender: “The Merriam-Webster dictionary defines committing fraud as the ‘intentional perversion of truth in order to induce another to part with something of value,’ and a fraud as ‘a person who is not what he or she pretends to be.’”

“When it comes to the federal budget, both of these definitions fit the GOP perfectly.”

“Contrary to what it still wants you to believe, the GOP — the political party that once supported “pay-as-you” go rules and balanced budget amendments to the U.S. Constitution and still routinely excoriates Democrats for what it says is their profligate ways — today is not the political party of fiscal responsibility and reduced deficits.”

“Actually, it’s not at all clear this is anything new.”

“Republican leaders on Capitol Hill are signaling that they want the Trump administration to write new regulations for a gun accessory that may have allowed the Las Vegas shooter to fire hundreds of rounds per minute,” The Hill reports.

“While not explicitly ruling out legislation to outlaw bump stocks, the GOP leaders’ words and actions suggest they’d rather avoid a head-on fight with the National Rifle Association — which prefers a regulatory approach to passing a new law.”

“We filtered out the mayor a long time ago. We don’t have time for the political noise,” Long said on ABC News’ “This Week.” “The bottom line is, we are making progress every day in conjunction with the governor.”  Cruz on Tuesday said President Donald Trump’s remarks on a visit to the island were “insulting.”  “He really has a communication issue,” she said. “You know he’s sort of like the miscommunicator-in-chief, really.”

Trump’s golf clubs in Scotland lost more than $24 million in 2016, as revenues dropped. Our update on @ap scoop. https://t.co/FYdAP66XD4

“Voter-suppression efforts and the disenfranchisement of former felons in many states further skew electoral outcomes, as does the power of money in politics.

Constitutionally, representation in the Senate is difficult to change. But this week, the Supreme Court heard a case on which it could (and should) rule to make gerrymandering much harder. A renewed Voting Rights Act and universal voter registration could restore access to the ballot box to those who have lost it. The National Popular Vote Interstate Compact is trying to move us toward the popular election of the president. And our campaign finance system badly needs repair.

Our paralysis on guns reflects a looming legitimacy crisis in our system. In the short run, advocates of sane gun laws should keep up the pressure, particularly in election showdowns involving candidates who resist any steps to make our country safer. In the long run, we need reforms to make majority rule a reality.”