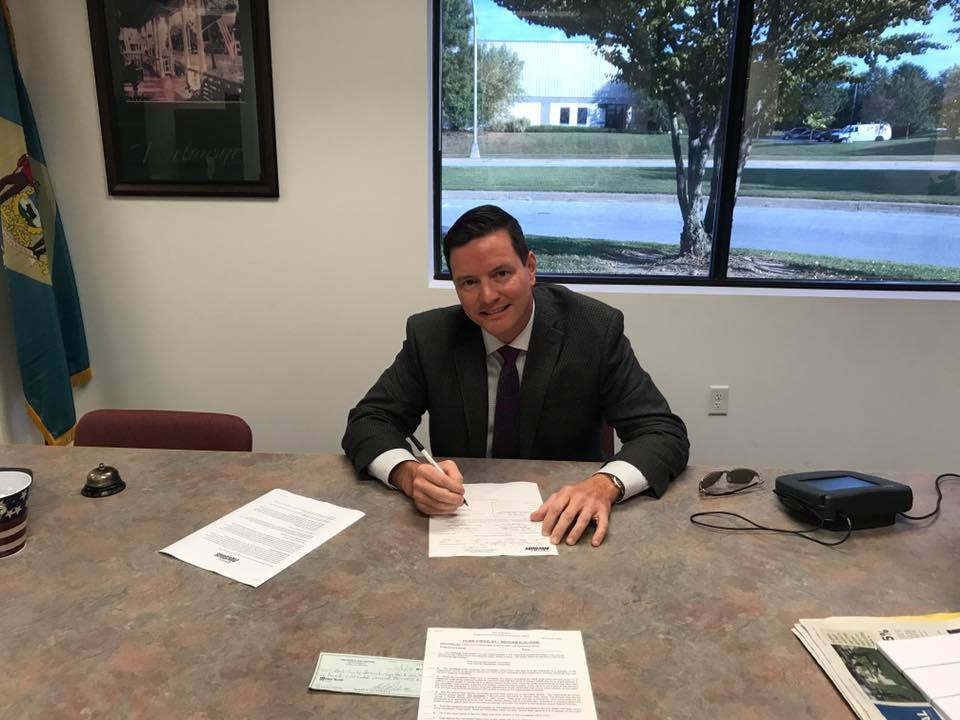 As expected and reported in these pages, State Rep. Trey Paradee will run for the State Senate in the 17th Senate District in Dover.  He will seek to succeed Senator Bushweller, who announced his retirement over the summer.  He’s committed, as he has already filed his candidacy with the Department of Elections on the first possible day to do so.

It’s no secret that Paradee has voted a little more conservatively than I would like on some issues in the past.  However, in his announcement statement, he did hit all the right notes on economic justice and said something that you don’t hear Democratic politicians say that much: that we are for Demand Side Economics.

“I am a proponent of demand side economics.  I support tax policies that favor middle class families and the working poor because every extra dollar that our families can keep is quickly spend on things like clothes, food, shoes, home improvements and household items.  This creates demand for products and services from our businesses, which allows businesses to pay higher wages and hire more workers.  Higher wages and more jobs lead to even more consumer spending, creating a ripple effect throughout our economy.”

Hear f-ing hear!  Every Democrat, copy and paste this and memorize it.  This is our answer to the idiot RNC talking point that “tax cuts for the rich create jobs.”  No, they don’t.  They just line the pockets of the rich.  Or sit unspent in a Swiss Bank Account.  They do not trickle down back into the economy.  Three failed experiments with Supply Side Economics have proven that tax cuts for the rich do not work, and instead do what they are designed to do: deprive the government of money so that they have to cut money from programs that benefit the working poor and the middle class, like Medicare, Medicaid and Social Security.

Paradee also gave a nod to the LGBTQ community by saying the following: “I will protect the civil rights of all our residents, regardless of race, color, religious preference, socio-economic background, or sexual orientation.  We must understand that we are all in this together, and, denigrating the rights or degrading the opportunities afforded to certain groups of people, only serves to weaken our society.  I would like my brothers and sisters in the LGBTQ community to know that I will not allow anyone to turn back the clock on the hard fought freedoms that you have achieved over the past decade.”

This statement was necessary given Trey’s history of anti-LGBTQ votes.  He voted no on gay marriage and no on banning discrimination against gays and lesbians in 2013.   Not so long ago (hence me saying he is a little more conservative than I would like).  I will take him at his word on that.  It appears that he accepts these issues as settled, and perhaps he and his district have finally evolved on these issues.   To be clear, though, Trey, no Democrat can support discrimination of any kind anywhere at any time.  I don’t care if you think your district does support it.  Democrats don’t, and we don’t care if we lose because of it.

Will Paradee face a primary for the Senate seat?  The strongest competitor, fellow Dover area State Representative Sean Lynn, has allegedly demurred. Lynn may run for reelection or for Attorney General.   Kent County Levy Court Commissioner Allan Angel may run for the Senate seat as well.   Here is the full statement from Paradee on his announcement.   Best of luck!