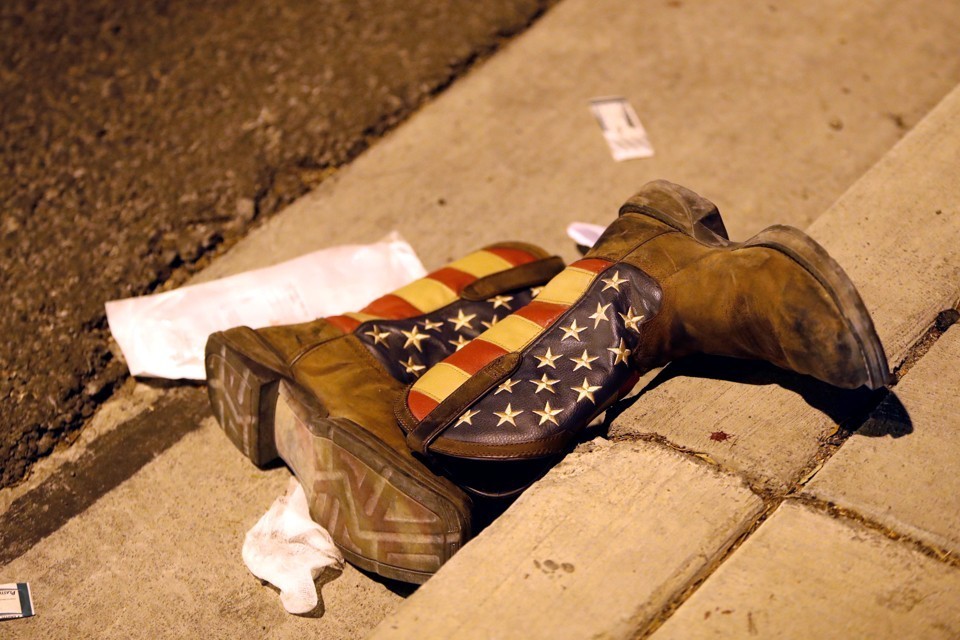 The gunman who killed at least 58 people and injured hundreds more Sunday night in Las Vegas had at least 18 weapons in his hotel room, according to multiple reports citing unnamed sources.  ABC News, the Wall Street Journal and the New York Times all reported similar information about the alleged shooter, Stephen Craig Paddock, a 64-year-old white man from Mesquite, Nevada who police say took his own life prior to their forcible entry into his hotel room.

Citing two unnamed sources familiar with the investigation, ABC News reported that there was “a combination of rifles and handguns at the scene.” One of the sources said there were 19 weapons found in Paddock’s room.  The New York Times, citing an unnamed law enforcement official, reported Paddock had more than 19 rifles and “hundreds” of rounds of ammunition. Two of Paddock’s rifles, the Times reported, had scopes and were mounted on tripods positioned out two separate windows.  And the Wall Street Journal, citing an unnamed law enforcement official, said “at least one” of Paddock’s weapons was fully automatic. The same source also said “some” of the weapons were fully automatic, according to the Journal.

Rick Klein: “This weekend would suggest that there is little or nothing exempt from the politics of division, as practiced by President Trump. Now comes a fresh test – the worst mass shooting in U.S. history, not to mention the Trump presidency, at a country-music festival in Las Vegas overnight. The ensuing days will test the president’s tone, and – depending on what’s learned about the shooter and his motivations – is very likely to involve the president’s name in some way. Can he resist the urge to punch – or counter-punch – in a time of national tragedy, compounded by an unfolding crisis in Puerto Rico?”

“These types of stories always wind up being political, whether it’s about gun control or the sources of the dark forces in a gunman’s life. There’s a numbing familiarity to it all. What’s new to the equation is Trump, whose instincts have rarely taken him in the direction of unity. The president spent the weekend being defiantly Trump, even down to his golf-course routine. This week will challenge him to recognize what this moment calls for.”

Sen. Rand Paul (R-KY) tweeted his disapproval of the Republican tax reform plan.  Said Paul: “This is a GOP tax plan? Possibly 30% of middle class gets a tax hike? I hope the final details are better than this.”

Axios: “Republicans can only afford to lose three votes on tax reform, and retiring Sen. Bob Corker has made it clear that he won’t vote for a bill that increases the deficit. Now, Paul’s tweet only complicates the matter further — and puts the pressure on Mitch McConnell to deliver a final bill that’s acceptable to his members.”

"The @potus rode a wave of white male paranoia and perceived lost power to the White House" –@joanwalsh https://t.co/rG7Oy8nZKf

A new USA Today/Suffolk University Poll finds that 68% of Americans believe President Trump’s call for NFL owners to fire the players and fans to boycott their games is inappropriate. That includes a third of Republicans as well as nine of 10 Democrats.   By 51% to 42%, those surveyed say the players’ protests are appropriate.

“This must stop. It is positively infuriating that my colleagues in Congress are so afraid of the gun industry that they pretend there aren’t public policy responses to this epidemic. There are, and the thoughts and prayers of politicians are cruelly hollow if they are paired with legislative indifference. It’s time for Congress to get off its ass and do something.” — Sen. Chris Murphy (D-CT), on Twitter, in response to the mass shooting in Las Vegas.

How Mexico Deals with Trump https://t.co/pXllMS525Z

Nate Silver finds that when President Trump stays away from Twitter, his approval rate ticks upward.

“If Trump never tweeted again, his approval rating would gradually rise to about 43 percent, the simulation estimates. Conversely, if he went on a Twitter bender and constantly tweeted at his maximum outrage level … it would eventually fall to 33 percent. Again, I wouldn’t take any of this too seriously. But Trump’s tweets often dictate news cycles and amplify controversies — and they can even help to spark diplomatic crises and put the president in legal jeopardy. It’s not crazy to think the tweets have had consequences — mostly negative ones — for Trump’s popularity.”

I could never figure out why Manafort would agree to work for Trump if he was so compromised. This story explains. https://t.co/2uOXMWXGN4

The Atlantic has obtained the full email exchanges between Paul Manafort and a former associate in Russia which show Manafort — at a time when he was deeply in debt and not earning a salary — attempting to use his role as Trump’s campaign manager to gain favor with Oleg Vladimirovich Deripaska, a Russian oligarch close to Vladimir Putin.

“They are part of a trove of documents turned over by lawyers for Trump’s presidential campaign to investigators looking into the Kremlin’s interference in the 2016 election. A source close to Manafort confirmed their authenticity.”

Beyond party ID, Jones will be hit hard on abortion

“But now Democrats are grappling with an all-too-familiar question of their own: how and even whether to confront a Republican Senate candidate whose views they find repugnant but who may be unbeatable in a deeply conservative state — no matter how much money liberal donors pour in to defeat him.”

Said Democratic strategist James Carville: “If you can’t run against Roy Moore, then what kind of party you got?”

Associates of President Trump “have turned over documents to federal investigators that reveal two previously unreported contacts from Russia during the 2016 campaign,” the Washington Post reports.

“In one case, Trump’s personal attorney and a business associate exchanged emails weeks before the Republican National Convention about traveling to an economic conference in Russia that would be attended by top Russian financial and government leaders, including President Vladi­mir Putin.”

“In the other case, the same Trump attorney, Michael Cohen, received a proposal in late 2015 for a Moscow residential project from a company founded by a billionaire who once served in the Russian Senate… The previously unreported inquiry marks the second proposal for a Trump-branded Moscow project that was delivered to the company during the presidential campaign.”

CHIP is now officially expired. Here is when states run out of federal money to cover kids if it's not renewed. https://t.co/MYmEBG7rsQ pic.twitter.com/E2LrNjWg6m

Josh Marshall on the first question he asks after every mass shooting: “Who was the suspect? I hoped it wasn’t a Muslim. I also hoped it wasn’t an African-American man. Obviously, the identity of the shooter doesn’t make anyone more dead or alive. For the particular crime, the identity and even the motive is basically irrelevant. As a journalist, I shouldn’t really ‘hope’ it is or is not anyone. It is whatever it is. Is this liberal guilt or race fixation? I don’t think so. I do so for a pretty simple reason: mass violence by Muslims or black men are immediately political – and wrapped into storylines they have relatively little connection to – whereas as mass violence by whites just is. They are individual acts and unfathomable, no more addressable by policy or societal action than the obvious and inevitable fact that we will all one day die.

If the shooter is a Muslim or even more a Muslim immigrant, the attack is “terrorism” and even more than that it becomes enrolled into the catalog of threats to justify immigrant bans, surveilling or expulsion of Muslim immigrants, various military actions in the Middle East, new wars, scraping the Iran nuclear deal.

If it’s a black man it’s only slightly less political. It’s part of the rising tide of crime (statistically slightly true though greatly exaggerated) Jeff Sessions and President Trump use to inflame racial division and reignite the drug war and 80s era policing. It’s a violent turn for the rising tide of African-American protest ranging from taking a knee to protests in Ferguson and other cities.

If it is a white man, seemingly without religious views of any particular relevance to the crime or targeting people of a particular race, it’s just … a thing that happened and not something we can do anything about. It’s original sin. A troubled, distraught person. Just a crazed individual, someone who seemed normal and then went horribly wrong. Critically, it’s an individual story, isolated and untouchable by anything we can do as a society.”

The evidence on Australia's gun buyback — implemented after its worst-ever mass shooting — is truly astounding https://t.co/Q94IHEkQCs

James Fallows on two dark American truths that Las Vegas reveals: “The first is that America will not stop these shootings. They will go on. We all know that, which makes the immediate wave of grief even worse.  […] I expect it to be true five years from now. I am an optimist about most aspects of America’s resilience and adaptability, but not about reversing America’s implicit decision to let these killings go on.  Decision? Yes. Other advanced societies have outbreaks of mass-shooting gun violence. Scotland, in 1996. Australia, in 1996 as well. Norway in 2011. But only in the United States do they come again and again and again.  […]

Here’s the other dark truth about America that today’s shooting reminds us of. The identity of the shooter doesn’t affect how many people are dead or how grievously their families and communities are wounded. But we know that everything about the news coverage and political response would be different, depending on whether killer turns out to be “merely” a white American man with a non-immigrant-sounding name.  […]

If they had Arab-sounding names, this would be a new episode of jihad. How often has Donald Trump invoked “San Bernardino” in his speeches, as shorthand for the terrorist threat in our heartland?  If they were Mexican, they would demonstrate the perils of immigration, and that Mexico is “not sending its best people.”  If they had been illegal immigrants, they’d dramatize the need to crack down harder, right now.  And if they had been black, I shudder to imagine the consequences.”

Read through to the third paragraph. The most egregious move by the NRA, Trump & the GOP. https://t.co/uA0DO3DW0S via @politicomag

“Facebook said it estimates 10 million people saw ads it has discovered on its platform paid for by Russian entities, but warned that it may not have uncovered all malicious activity that attempted to interfere in the American political process,” the Wall Street Journal reports.

“The revelation from Facebook quantifies for the first time the spread of the known Russian activity since the social network said last month it had identified 470 ‘inauthentic’ Russian-backed accounts responsible for $100,000 in advertising spending. Facebook presented congressional investigators with data on 3,000 ads bought by the Russian actors before and after the U.S. presidential election.”