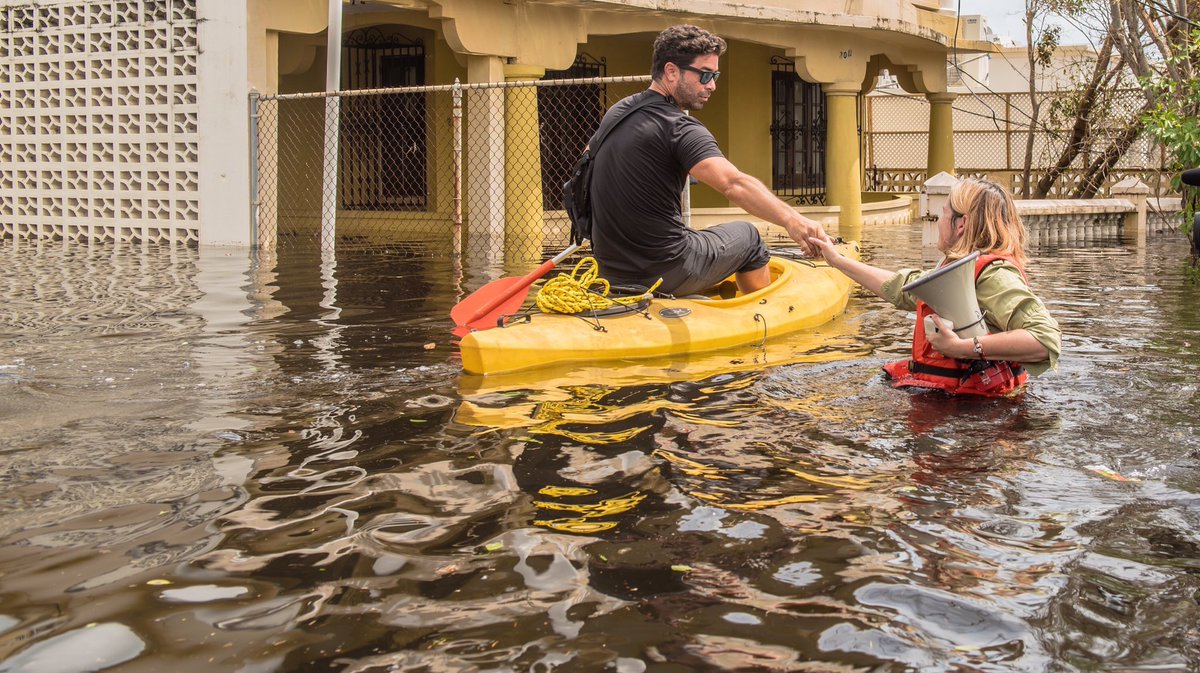 The piece of subhuman excrement currently and tragically serving as our President dared to attack the Mayor of San Juan for committing the unconscionable sin of begging for help so that people don’t die.  For you see, Mayor Carmen Yulin Cruz’s pleas disrupted Trump’s preferred narrative of an impeccable federal response in Puerto Rico where everyone is praising the Donald.

President Trump accused the mayor of San Juan, Puerto Rico, of demonstrating “poor leadership” amid the deepening crisis on the island that was devastated by Hurricane Maria, the Washington Post reports.   The tone deaf President launched this personal attack on the Mayor and then attack all Puerto Ricans in general, saying “they want everything done for them.”   He launched these racist attacks from the comfort of his golf resort in New Jersey, evidencing the complete darkness of his soul.

Aaron Blake: “Anybody who is surprised at this from a president who attacked a former prisoner of war for being a prisoner war, criticized a Gold Star family and made fun of a reporter’s physical disability has a short memory. This is who Trump is. He doesn’t accept criticism and move on; he brings a bazooka to a knife fight — even when those wielding the knife are trying to save lives.”

Josh Marshall says it was a true moment of national disgrace: “Thanks to reporting from the big papers, we now have a general understanding of how this all unfolded. For a critical three or four days after Maria made landfall in Puerto Rico, President Trump was away at his New Jersey golf resort, ranting about the NFL and generally not paying attention. It now seems that wasn’t merely a matter of optics and presidential statements. Critical time was lost and things didn’t happen. Once the scope of catastrophe began to become clear, Trump’s inaction began to generate criticism. Once that happened Trump proceeded to fold Puerto Rico into his comfort zone politics of grievance and narcissism. The focus shifted to Puerto Rico’s debt, ingratitude and – finally this morning – laziness and disorganization.

It does not discount or diminish Trump’s penchant for racist awfulness to note that a lot of this doesn’t seem to be by design or, perhaps better to say, forethought. It is more like reflex, in response to his own bumbling. Trump provoked his battle with the NFL out of a mix of personal, racist rage and desire to stoke up his supporters with a new white rights grievance controversy. This seems a little different. His own incompetence and indifference to his job responsibilities generated criticism and led him to make critical mistakes he could not undo. Once that happened, his own personality kicked in. The greased path to narcissistic injury, grievance and racist grievance political attacks was the inevitable reflex. It’s his comfort zone, his natural inclination.”

Mike Allen: “Long after people have finished talking about Tom Price’s flights or tax reform or NFL protests, they’ll remember how Trump handled Puerto Rico. So the stakes are massive for the hours ahead.”

Ret. Lt. Gen. Honoré: "The mayor's living on a cot and I hope the President has a good day at golf." (via CNN) pic.twitter.com/tpmniBKe1g

“You’re going straight to hell, Donald Trump. No long lines for you. Someone will say, ‘Right this way, sir.’ They’ll clear a path.”  — Lin Manuel Miranda, on Twitter, after President Trump attacked the mayor of San Juan, Puerto Rico.

“The National Security Agency warned senior White House officials in classified briefings that improper use of personal cellphones and email could make them vulnerable to espionage by Russia, China, Iran and other adversaries,” Politico reports.

“The briefings came soon after President Donald Trump was sworn into office on Jan. 20, and before some top aides, including senior adviser Jared Kushner, used their personal email and phones to conduct official White House business.”

Meanwhile, “a Russian hacker arrested in Spain on a U.S. warrant said he previously worked for President Vladimir Putin’s United Russia party and feared he would be tortured and killed if extradited,” Reuters reports.

"There's a medical center down here, and everyone that was in the Intensive Care Unit, died. Everyone. That's just one detail." 4/

In the next few days, we are going to start to get numbers on how many people have died, both during or as a result of the storm, and during the last 11 days of our indifference. The number is going to be high, rivaling Katrina. The number will be in the thousands.

President Trump “berated” Health and Human Services Secretary Tom Price “in the Oval Office on Friday afternoon for about two hours before heading out to meet with reporters, according to people informed about the meeting,” the New York Times reports.

After his tweets on Puerto Rico this AM, I don't want to hear anymore about Trump is a "master media manipulator"… https://t.co/IvZOJUC5df

Washington Post: “That populist rage in the base as Trump struggles to enact his priorities — which lifted former judge Roy Moore to victory on Tuesday against Trump’s ally, Sen. Luther Strange (R-Ala.) — now threatens to upend GOP incumbents in 2018 as the latest incarnation of Republican grievance takes hold.”

“Stoked by former White House chief strategist Stephen K. Bannon and his incendiary media platform, Breitbart News, a new wave of anti-establishment activists and contenders are emerging to plot a political insurrection that is with Trump in spirit but entirely out of his — or anyone’s — control.”

“Central command is the ‘Breitbart Embassy,’ a Capitol Hill townhouse where Bannon has recently huddled with candidates, from House prospects to Senate primary recruits. Hedge fund executive Robert Mercer and his daughter Rebekah — Bannon’s wealthy allies — have already pledged millions to the cause, said people briefed on their plans.”

“Word is certainly spreading” in PR on Trump’s tweets, @Boris_Sanchez says. “Several people telling me things that I cannot repeat" on TV. pic.twitter.com/DUUOsT3sTs

Politico: “Democrats have long been terrified that the Sanders-Clinton slugfest of 2016 would set off a prolonged civil war in the party, forcing incumbents to fight off primary challengers from the left in Senate and gubernatorial races. It hasn’t happened. In a surprising reversal of the post-2008 dynamic — when Republicans were shut out of power, then saw a raft of tea party primary challengers take on their incumbents — Democrats have largely been spared of that predicament.”

"So mad I could spit": a former disaster relief official on Trump’s response to Puerto Rico https://t.co/QPxJTQFkeo

“A day after announcing their ambitious tax plan, Republicans debated scaling back one of their largest and most controversial proposals to pay for lower tax rates: repeal of the individual deduction for state and local taxes,” the Wall Street Journal reports.

“Faced with the potential for defections by House Republicans from high-tax states such as New York and New Jersey, Republicans are exploring ways to satisfy those lawmakers without backing off the lower tax rates they promised.”

“The fight over the state and local deduction, with more than $1 trillion at stake over a decade, is an early signal of the bruising battle ahead for Republicans trying to pass a tax bill that hasn’t garnered Democratic support and that faces narrow GOP margins in the House and Senate. It is the most obvious case of a bloc of pivotal lawmakers holding a specific concern, but it won’t be the only one.”

A team of NYT reporters and photographers offers some ground truth from Puerto Rico. Please read this. https://t.co/lmI7KgmQiq

New York Times: “Republicans’ release of a sweeping plan to rewrite the tax code has set off a scramble among Washington lobbyists and trade groups to protect valuable tax breaks and other long-ingrained provisions. The plan’s scant details make it hard to know what, exactly, is on the chopping block. But within hours of the plan’s unveiling on Wednesday, flash points emerged over measures that supporters said could hurt the housing market, raise borrowing costs and increase the tax burden on families in high-tax states.”

The best way to helpfully channel your energy and outrage over Trump's Puerto Rico tweets: https://t.co/ybTsoCDGPr

Politico: “It’s not just Kelly who is uncertain of how to make the arrangement work. In recent months, according to multiple administration officials, the president has also been casually surveying people close to him about whether having his family members in the government is creating too much noise.”

“Since Kelly put his firm grip on the West Wing in July, however, the role of the Trump children has shifted. Aides claim the couple was eager for a more functional work environment, and have been happy to fall in line with Kelly’s rules.”

“But Kushner has also complained to friends and allies about his stunted status in the new regime. He can no longer simply float in and out of the Oval Office, or function in the freewheeling role he has grown used to since the campaign, he has told associates. That marks a change of status for the former real estate scion, who before working as a free-ranging agent for his father-in-law, served as the top dog at his family-owned real estate company in Manhattan.”