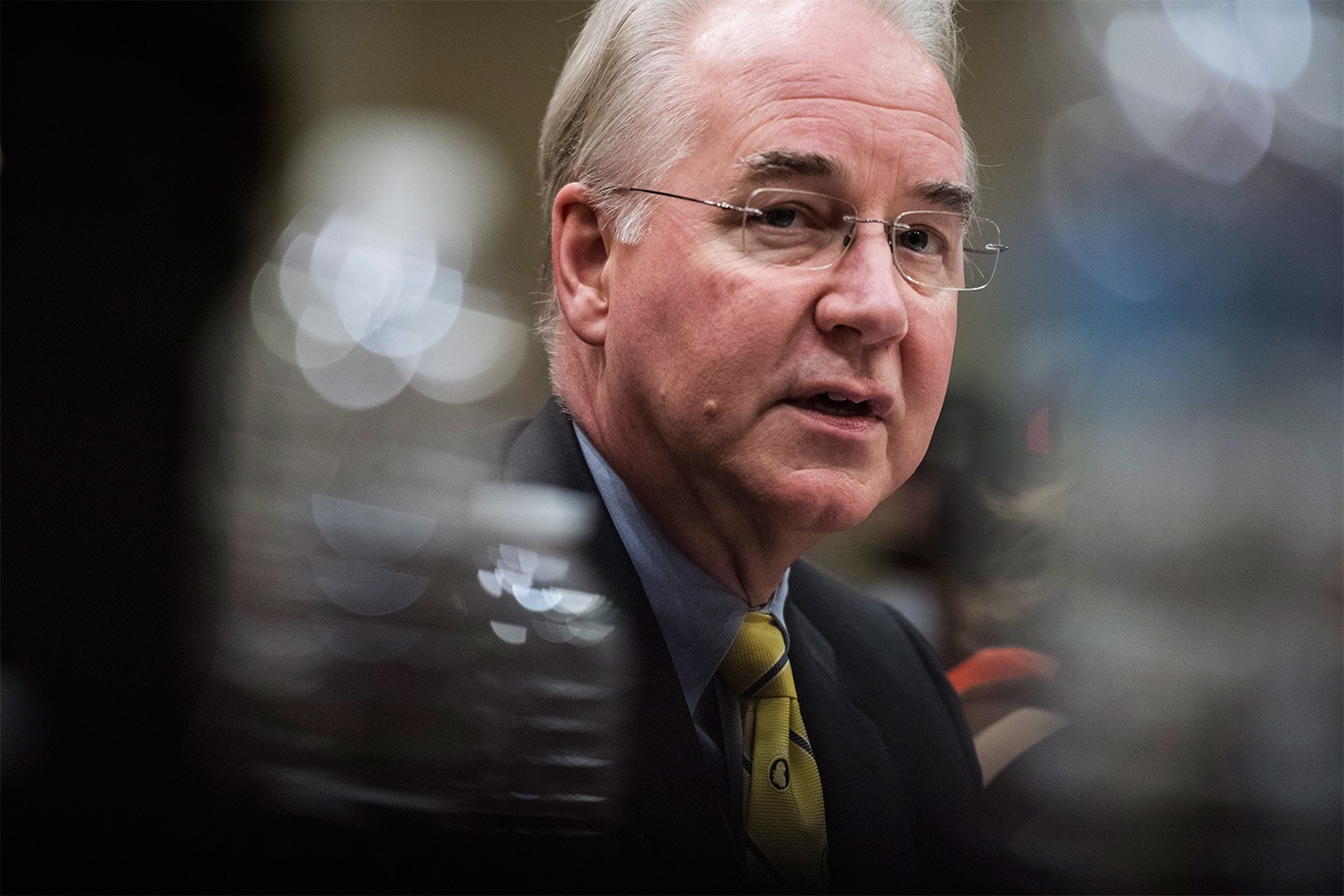 On Thursday, Secretary of Health and Human Services Tom Price apologized for spending an estimated $400,000 of taxpayer money on charter airfare for trips that he likely could have made for vastly less money by flying commercially. Just hours later, Politico reported that Price had also spent over $500,000 more on military jet trips to Europe, again on routes for which commercial flights were available. And now Tom Price is not the Secretary of Health and Human Services anymore.  He resigned just as Trump said he would “decide” what to do with Price this evening.  So now that Trump has his Friday night free relaxing in Bedminister when Puerto Ricans die in the streets, why doesn’t he also fire his Treasury Secretary, VA Secretary and EPA Administrator as well.  Both of them spent tax payer money on unnecessary personal trips or items.

BREAKING: The entire damn Trump White House exposed secrets through the use of private devices and emails. https://t.co/cyeoB4bwgO

The Senate Budget Committee “laid the groundwork for a party-line overhaul of the tax code, but not another attempt to repeal the Affordable Care Act,” Axios reports.

“Some conservatives had hoped to combine health care and tax reform. But many Republicans, especially in leadership, feared that would make it impossible to pass either one. The outline released this morning would delay another run at health care until the tax rewrite effort is finished.”

Washington Post: “The budget document is a key precursor for any tax bill, setting out procedures that will allow the legislation to pass with a simple 51-vote majority rather than the usual 60-vote supermajority. According to the draft released Friday, the Senate Finance Committee and House Ways and Means Committee will have until Nov. 13 to draft tax bills that cost no more than $1.5 trillion in lost revenue.”

Playbook: “If Congress can’t squeeze through a big tax reform package this year, there’s already talk among some about passing a smaller package of tax cuts before the end of 2017, with the promise of trying to complete a larger reform effort in 2018. This would be a way for Republicans to say they gave the tax relief they promised. With health care reform far off, tax is the ball game for Republicans as they head into the 2018 election. There is optimism — some would call it exuberance — that Republicans will be able to get a large-scale tax package through in the 36 legislative days before the year’s up.”

Ryan Lizza: “The Big Six… couldn’t agree on enough reforms to raise revenue. Paul Ryan had one idea, a so-called border-adjustment tax, which would have raised a trillion dollars to offset some of the rate cuts in the plan by taxing imports. But that was nixed by the White House and never replaced with anything as ambitious. In the end, the Big Six also couldn’t agree on as many details as the group originally proclaimed.”

“Instead of doing the hard work of crafting a revenue-neutral tax reform, which requires taking on powerful political constituencies and working with Democrats, Republicans will fall back on arguing that the economic effects of the tax legislation will be so powerful that it will pay for itself with growth.”

This is completely unacceptable. Money designated to take care of veterans should NEVER be used for personal perks. We fought for years to hold Phoenix VA employees accountable, and we won’t stop now. https://t.co/AyHqnRmQOf

“Nearly three days into a trip to Europe this past July, Veterans Affairs Secretary David Shulkin had attended a Wimbledon championship tennis match, toured Westminster Abbey and taken a cruise on the Thames. The 10-day trip was not entirely a vacation. Shulkin was in Europe for meetings with Danish and British officials about veterans’ health issues,” the Washington Post reports.

“Yet he and his wife spent about half their time sightseeing, including shopping and touring historic sites, according to an itinerary obtained by the Washington Post and confirmed by a U.S. official familiar with their activities.”

“Shulkin’s six-person traveling party included his acting undersecretary of health and her husband, his chief of staff and another aide, the itinerary says. They were accompanied by a security detail of as many as six people.”

A new Public Policy Institute of California poll finds that 50% of California’s likely voters think Sen. Diane Feinstein (D-CA) should not run for re-election in 2018, while 43% support another run.  Still, the poll found that Feinstein remains popular. More than half of likely voters — 54% — approve of the job she’s doing, compared with 38% who disapprove.

This is disgusting. Trump ignored the situation in Puerto Rico despite pleas from officials – until he SAW IT ON TV. https://t.co/YHWsC9M2f9

“The Republican tax plan would deliver a major benefit to the top 1 percent of Americans, according to a new analysis by a leading group of nonpartisan tax experts that challenges the White House’s portrayal of its effects,” the Washington Post reports.

“The plan would deliver far more modest tax cuts to most other households — an average cut of $1,700 for households in 2027… But the results would be unevenly spread, with 1 in 4 households paying more in taxes.”

Meanwhile, “[b]uried in the fine print of the newly released Senate Republican budget: language making it much easier to rush a tax cut through Congress,” Bloomberg reports.

“The budget would erase a Senate rule requiring a full Congressional Budget Office estimate of the cost of the legislation at least 28 hours before a vote. It would get rid of a provision that required a Senate budget reconciliation bill to reduce the deficit by at least as much as a House reconciliation bill. That language caused headaches for Republicans during their failed Obamacare repeal effort.”

Rick Klein: “The first two storms, it appears, were only wind-ups to the presidential moment that presents itself now. The crisis in Puerto Rico figures to define President Trump’s responses to this remarkable string of powerful storms. After first seeming to blame Puerto Rico’s poor infrastructure and fiscal crises, Trump is now praising FEMA and expressing his wish that the ‘press would treat fairly.’ But this is one where claims of ‘fake news’ will likely be subsumed by the images and realities.”

“Those realities include millions of American citizens in total crisis. Sen. Marco Rubio (R-FL) is warning that the lack of ‘clear command, control and communication’ will cause the situation to ‘deteriorate rapidly.’ The general who oversaw the federal response to Hurricane Katrina is calling the situation – yes – ‘like Katrina.’”

Nate Cohn: “The Republican structural edge in the House is fully realized only with the added advantage of incumbency. The Democrats would be overwhelming favorites to retake the House in this political environment if no incumbents chose to run for re-election, even with all of the burdens of gerrymandering and geography.”

“So far, four Republicans have announced they will not seek re-election in highly competitive districts.”

“My colleagues Jonathan Martin and Alex Burns reported recently that Republicans fear a wave of additional retirements. And Roy Moore’s victory over the establishment-backed Luther Strange in the Alabama Republican Senate primary this week could further embolden primary challenges to G.O.P. House incumbents, increasing the chances that they step aside.”

“But without a string of retirements, the Democratic path to control of the House is challenging. Incumbents are just that hard to beat.”

New directive from the White House to Cabinet: No private air travel without the W.H. chief of staff's approval https://t.co/bqNyvPGT7j

New York Times: “Republicans are confronting an insurrection on the right that is angry enough to imperil their grip on Congress, and senior party strategists have concluded that the conservative base now loathes its leaders in Washington the same way it detested President Barack Obama… Mr. Strange’s demise, senior party strategists and conservative activists said Wednesday, makes it likelier that Republican incumbents in the House and Senate will face serious primary challenges in 2018, fueled by anger at the party’s apparent ineptitude at wielding power in Washington.”

“Republicans increasingly worry that their base’s contempt for Mr. McConnell is more potent than its love for Mr. Trump. Mr. McConnell could be an anchor around incumbents in the same fashion as Representative Nancy Pelosi, the House Democratic leader, who is routinely used to undermine Democratic candidates.”

Mike Allen: “Some conservative Republicans worry about a ‘nightmare scenario’ for the party: no health care repeal, no tax reform — and the party’s top two accomplishments of this Congress are a ‘bailout’ for insurance companies (fixes to the Affordable Care Act), and ‘amnesty’ (Dreamer legislation).”

“That would depress Republicans and excite Democrats — the surest formula for the GOP to blow its majorities.”

“Trump is somebody who has instinctive sympathy with people who are like him,” – @JohnJHarwood https://t.co/JAjXCbWMJJ

James Hohmann: “More than 50 million ballots were cast by Floridians in the seven presidential elections from 1992 through 2016. If you add them all up, only 18,000 votes separate the Republicans from the Democrats. That is 0.04 percent.”

“Florida is rightfully considered the swingiest of swing states. Control of the White House in 2000 came down to a few hundred hanging chads – and one vote on the Supreme Court. The past four statewide elections – two governor’s races and two presidentials – were all decided by a single percentage point.”

“So it could be quite politically significant that tens of thousands of Puerto Ricans, maybe more, are expected to permanently move into Florida as the result of Hurricane Maria.”

Trump family's Aspen ski vacation cost taxpayers $330,000. Most Republicans in Congress were elected running against crap like this. https://t.co/Zg5pidlz7m

John Podhoretz: “If any figure in the United States bears watching over the next couple of years as our political culture continues the radical transformation that led to the election of Donald Trump, it’s Oprah. I believe she’s uniquely positioned, should she wish to commit herself, to seek the Democratic nomination for president and challenge Trump in 2020.”

“If you think that Trump can be beaten by a two-term governor of a Midwestern state with really good ideas about health care, or by a senator who really attracts young people, think again. The idea that a relatively conventional elected official will differentiate herself from Trump by dint of her seriousness or that an unconventional elected official can out-populist Trump is crazy.”