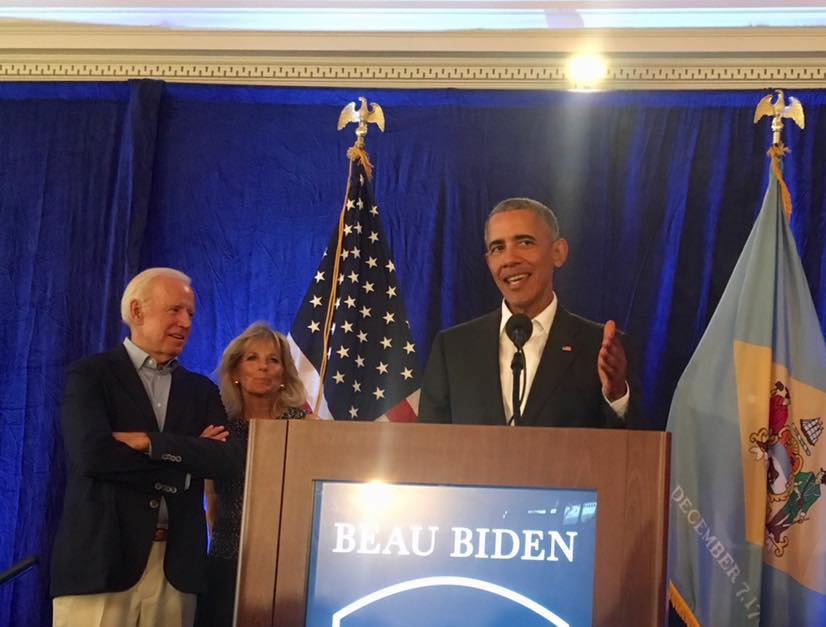 A surprise guest came out to a fundraiser for the Beau Biden Foundation being held at the Wilmington Country Club last night: the greatest living former President alive, Barack Obama.

“An audible gasp was heard when the former president, along with former Vice President Joe Biden, were introduced to the audience attending the cocktail reception and silent auction to raise money for the Beau Biden Foundation for the Protection of Children. “If I’d known that you were giving away a car on the hole-in-one, I would have played,” Obama joked. On a more serious note, Obama said he was there to lend his voice and support to a family that he cares deeply about. And “to honor a man that I thought the world of and to say thank you to all of you for supporting this wonderful cause.”

The annual Beau Biden Foundation Cocktail Reception and Silent Auction is a big fundraising for the Foundation, which works to expand and continue work training adults in child abuse prevention and kids and families in bully prevention.

Here is some video of his and the greatest living former Vice President, Joe Biden’s, remarks.

Beau fought to protect the most vulnerable among us. Thanks to my friend @barackobama for honoring his life’s work with the @BeauBidenFdn. pic.twitter.com/oHAb6mc6fT

More, thanks to Paul Baumback and Laura Sturgeon:

17 comments on “Obama is back in town”