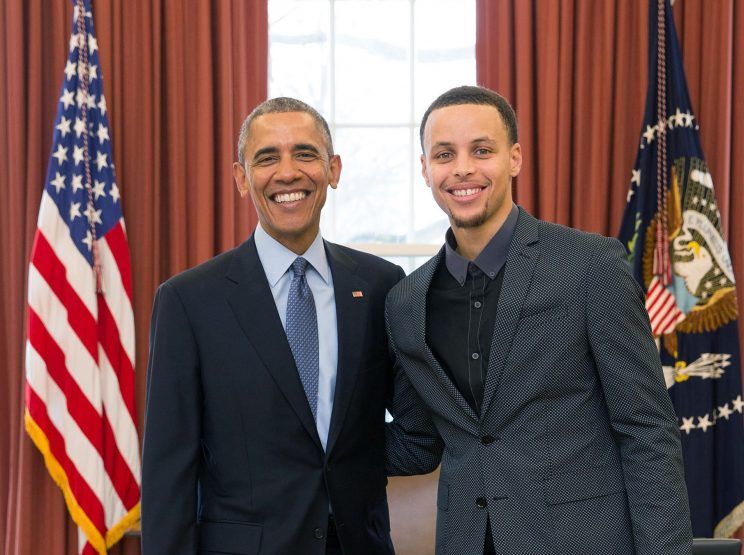 “President Trump turned professional sports into a political battleground Friday night into Saturday morning, directing full-throated ire toward African American athletes who have spoken out against him and prompting a response from the National Football League, its players and the best basketball player in the world,” the Washington Post reports.

“In a span of roughly 12 hours, as the sports world typically would be gearing up for college football and baseball’s pennant races, Trump ensnared and agitated the most powerful sports league in North America and perhaps the most popular athlete in American team sports. His comments set the stage for potential mass protest Sunday along NFL sidelines.”

New York Times: “Mr. Trump’s broadsides this time focused on some of the most prominent African-American athletes in the country, who have international followings and have called out the president for his lack of tolerance and divisive views on race.”

NFL commissioner Roger Goodell responded to President Trump’s excoriation of players who protest during the national anthem, saying the “divisive comments” show a “lack of respect” for the nation’s most popular sport, Politico reports.

Said Goodell: “Divisive comments like these demonstrate an unfortunate lack of respect for our great game and all of our players, and a failure to understand the overwhelming force for good our clubs and players represent in our communities.”

Pushback vs #Trump attacks on Kaepernick, Curry a sign of what we argue here: Democracy's defenders are mobilizing!https://t.co/3GFys4XpE9

You know, throughout this supposedly hoax of a Russian investigation, I always assumed that it may be proven that Trump campaign officials colluded with Russian officials.  But I did not assume, as others did, that the Russians hacked and changed the actual election results, thus nullifying the 2016 Election and requiring either a do over election or a full scale civil war/revolution.   But now the Department of Homeland Security “notified 21 states Friday that Russia attempted to hack their election systems before the 2016 election,” The Hill reports.

“In the majority of the states, the Department of Homeland Security only saw preparations for hacking, like scanning to find potential modes for attack. Voting machines are not connected to the internet and cannot be scanned in this way, but other systems, including those housing voting rolls, can be.

An HHS spokesperson told Politico that Secretary Tom Price “has been taking private jets because an unreliable commercial flight once forced him to cancel an important meeting.”  “But the flight in question — to a two-day industry conference at a Ritz-Carlton hotel in southern California — didn’t get off the ground on a day when storms virtually shut down air traffic in the Washington region, preventing even private jets from getting out.”

“The details cast into doubt HHS’ justification for Price’s use of private jets as he faces criticism from congressional Democrats and a review of whether he complied with Federal Travel Regulations from his department’s inspector general.”

“Senior aides to President Trump repeatedly warned him not to deliver a personal attack on North Korea’s leader at the United Nations this week, saying insulting the young despot in such a prominent venue could irreparably escalate tensions and shut off any chance for negotiations to defuse the nuclear crisis,” the Los Angeles Times reports.

“Trump’s derisive description of Kim Jong Un as ‘Rocket Man on a suicide mission’ and his threat to ‘totally destroy’ North Korea were not in a speech draft that several senior officials reviewed and vetted Monday.”

“Some of Trump’s top aides, including national security advisor H.R. McMaster, had argued for months against making the attacks on North Korea’s leader personal, warning it could backfire. But Trump felt compelled to take a harder line.”

Washington Post: “The no-task-too-small leadership style — dating to Kelly’s training in the Marine Corps, where he rose to a four-star general — has its benefits for a president who often sows chaos in his wake, implementing a sense of order and discipline in a White House known for lacking both.”

“But it also has prompted grumbling about micromanaging within the West Wing, where some staffers complain that Kelly may be growing his mandate too far and that his strict regimen stifles the creativity and spontaneity that have been hallmarks of Trump’s enterprises. As one of Kelly’s subordinates put it, the chief of staff sometimes becomes ‘a one-man choke point.’”

..@HHSGov plans to shut down @HHSGov for 12 hours during all but one Sunday during the upcoming 6 week open enrollment season pic.twitter.com/0d5WUtLc9G

A new Public Policy Polling survey finds that only 24% of Americans support the Graham-Cassidy health care bill being considering in the U.S. Senate.  Vox: “Majorities believe that Graham-Cassidy would instead both raise health care costs for most Americans and result in fewer Americans obtaining coverage. Only 20% said they thought the bill would cover more Americans.”

Trump is truly the first TV president, and a harbinger of the decline in intelligence to come in U.S. politics. https://t.co/G7fuZwGmMV pic.twitter.com/fxwVg4N7TL

“As more than 40 subdued Republican senators lunched on Chick-fil-A at a closed-door session last week, Sen. Cory Gardner (R-CO) painted a dire picture for his colleagues. Campaign fund-raising was drying up, he said, because of the widespread disappointment among donors over the inability of the Republican Senate to repeal the Affordable Care Act or do much of anything else,” the New York Times reports.

“Mr. Gardner is in charge of his party’s midterm re-election push, and he warned that donors of all stripes were refusing to contribute another penny until the struggling majority produced some concrete results.”

Said Gardner: “Donors are furious. We haven’t kept our promise.”

President Trump’s attorneys in the probe of Russian election interference “are being funded in part through a Republican Party account with a handful of wealthy donors—including a billionaire investor, a property developer seeking U.S. government visas and a Ukrainian-born American who has made billions of dollars doing business with Russian oligarchs,” the Wall Street Journal reports.

“The RNC and campaign’s payment arrangement for Mr. Trump’s lawyers is legal. But ethics experts cautioned that Mr. Trump’s decision to rely on party and campaign accounts to pay for his attorney fees can raise thorny political issues.”

A reminder that state and local policy can be much more important than federal. https://t.co/Btb4PQtn1R

From a Washington Post report on President Trump campaigning for Sen. Luther Strange (R-AL) in Alabama last night:  “Strange took the stage just before Trump and proudly put on a red “Make America Great Again” hat. Up in the stands, a veteran of the war in Afghanistan remarked: “I don’t know who this guy is. I’m here for Trump.”

“Are you ready to support our president tonight?” Strange asked. From the stands, a young Trump supporter shouted back: “You suck!””

Towards a structural explanation of the modern Republican Party: https://t.co/BX5wqFvjV1

Washington Post: “Republicans are targeting a corporate rate of 20 percent in their federal tax overhaul plan, according to three people familiar with the emerging blueprint — a number that represents a substantial cut from the current 35 percent rate but falls short of the 15 percent President Trump has long pushed for.”

“The plan remains fluid … But they said the template is taking a more definite shape ahead of a planned rollout next week by the ‘Big Six’ negotiators from the White House, Senate and House.”