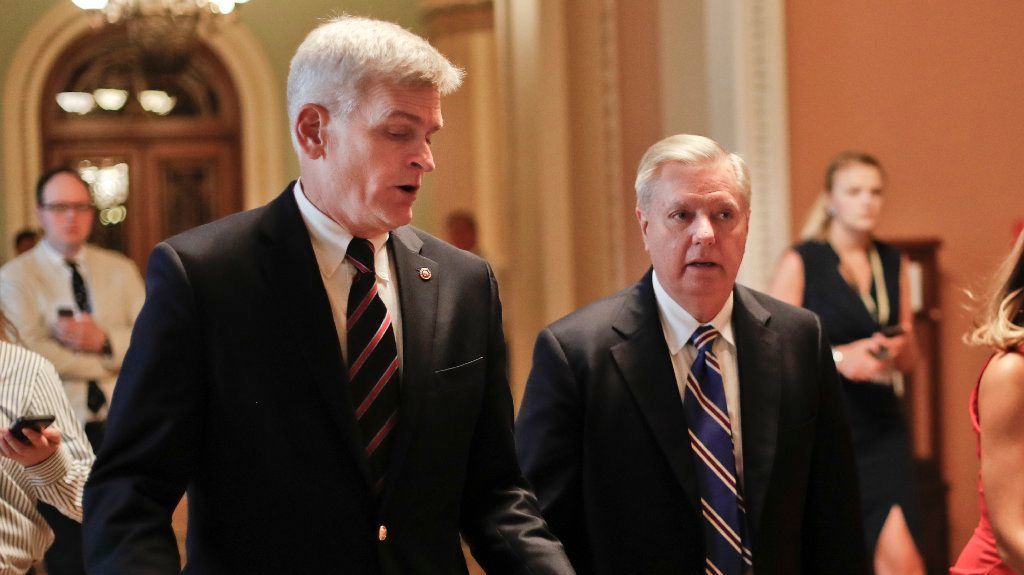 Before we get into all the latest healthcare news, I think we need to understand this: Republicans are bluffing.  They don’t have the votes.   As you will see below, McCain is back on the fence, but definitely leaning to the no side.  Collins is a no.  If you believe him, Rand Paul is a no.   And Lisa Murkowski sure sounds like a no.  That is 52 no votes. And then look at the body language in the video….

“The health insurance industry, after cautiously watching Republican health care efforts for months, came out forcefully on Wednesday against the Senate’s latest bill to repeal the Affordable Care Act, suggesting that its state-by-state block grants could create health care chaos in the short term and a Balkanized, uncertain insurance market,” the New York Times reports.

“In the face of the industry opposition, Senate Republican leaders nevertheless said they would push for a showdown vote next week on the legislation, drafted by Senators Lindsey Graham of South Carolina and Bill Cassidy of Louisiana.”

A new analysis finds the latest Republican bill to repeal Obamacare “would set the stage for a decade of new health care fights as states struggle to cover residents with less money and an unstable source of funding,” NBC News reports.  “Experts say the long and difficult process to implement Graham-Cassidy could create years of chaos in the insurance market, potentially hiking premiums and unsettling markets in 2018 and beyond.”  Said health care analyst Billy Wynne: “I don’t think it’s possible to overstate how disruptive this would be.”

In an interview with Politico, Sen. John McCain (R-AZ) sounded like he could end up tanking the latest GOP health care bill even though it was written by Sen. Lindsey Graham (R-SC), his close friend.  Said McCain: “Nothing has changed. If McConnell wants to put it on the floor, that’s up to McConnell. I am the same as I was before. I want the regular order.”

Politico: “The liberal activists roused into the streets by President Trump are revving up for one last campaign to save Obamacare. The sudden resurgence of Republicans’ repeal push appeared to catch Democrats and their base by surprise. But ahead of Senate Majority Leader Mitch McConnell’s plans to vote next week on a new bill to dismantle the health law, the Democratic grass roots is on what one leading activist called ‘full war footing.’”

“Less than two weeks before Donald Trump accepted the Republican presidential nomination, his campaign chairman offered to provide briefings on the race to a Russian billionaire closely aligned with the Kremlin,” the Washington Post reports.

“Paul Manafort made the offer in an email to an overseas intermediary, asking that a message be sent to Oleg Deripaska, an aluminum magnate with whom Manafort had done business in the past.”  Key detail: “The emails are among tens of thousands of documents that have been turned over to congressional investigators and Special Counsel Robert S. Mueller.”

As Republicans scramble to find the 50 votes they need to pass the latest Senate health care bill, CNN did some body-language analysis using video of the Senate floor last night.

Politico: “It’s still anyone’s guess whether the bill’s backers can get to 50 votes. One Republican senator suggested that McConnell may ultimately decide to bring the bill up for another failed vote, in part to show GOP donors and President Trump that the Senate GOP tried again.”

Sen. Lindsey Graham (R-SC) was quoted by the Associated Press: “We’re going to vote. Everybody will be held accountable.”

Special counsel Robert Mueller “has asked the White House for documents about some of President Trump’s most scrutinized actions since taking office, including the firing of his national security adviser and F.B.I. director,” the New York Times reports.

“In recent weeks, Mr. Mueller’s office sent a document to the White House that detailed 13 different areas that investigators want more information about. Since then, administration lawyers have been scouring White House emails and asking officials whether they have other documents or notes that may pertain to Mr. Mueller’s requests.”

“One of the requests is about a meeting Mr. Trump had in May with Russian officials in the Oval Office the day after James B. Comey, the F.B.I. director, was fired.”

Washington Post: “The requests broadly ask for any document or email related to a series of highly publicized incidents since Trump became president, including the firing of National Security Adviser Michael Flynn and Comey, the people said. The list demonstrates Mueller’s focus on key moments and actions by the president and close advisers which can address whether Trump sought to block the FBI investigations of Flynn and of Russian interference. His team is also eyeing whether the president sought to obstruct the earlier Russia probe.”

Mike Allen: “Now we can tell you about another potential honey pot for Mueller. Former colleagues of Sean Spicer tell Axios that he filled ‘notebook after notebook’ during meetings at the Republican National Committee, later at the Trump campaign, and then at the White House.”

“When Spicer worked at the RNC, he was said to have filled black books emblazoned with the party’s seal. Spicer was so well-known for his copious notes that underlings joked about him writing a tell-all.”

Said one source: “Sean documented everything.”

Preet Bharara, the US attorney who President Trump fired just three months into his presidency, said on his new podcast that he believes that if he had stayed Trump would have asked him “to do something inappropriate.”

Said Bharara: “I believe based on the information that we have on the president talking to Jim Comey relating to Michael Flynn, the information about the president talking to Jeff Sessions about the case of Joe Arpaio, and how he wanted both of those cases to go away — that had I not been fired, and had Donald Trump continued to cultivate a direct personal relationship with me, it’s my strong belief that at some point, given the history, the President of the United States would have asked me to do something inappropriate.”

Jeff Greenfield: “All through her public life, Clinton has been hobbled by the label ‘inauthentic.’ Her changing hairstyles, her choice of baseball teams, her circle-the-wagons approach to the press—they’ve all felt, to the public, like symptoms of the lack of a core…”

“Her book suggests, though, that the person we’ve seen over the past quarter-century, and the person we watched seek the presidency twice, is the authentic Hillary. In fact, to judge by her book, she may have been the most authentic person in the race. The lengthy analysis of why voters behaved as they did, the detailed accounts of the programs she intended to pursue as president, the ways in which racism and misogyny played out in blatant and subtle forms, all paint the picture of a very smart, deeply engaged self-described ‘policy wonk,’ who is consumed by the need to conquer problems with an army of data-driven policies, andwhose instinctive resistance to visionary politics proved to be one of her biggest handicaps in her (presumably) last run.”

“And if she seemed out of touch and unable to connect to voters in a changed America—unable to understand why a significant majority of voters saw her as untrustworthy—well, in a sense, What Happenedsuggests that that was ‘authentic’ too, the flaw of a person who still retains blind spots in trying to understand the limits of her appeal.”

“In a sharp departure from his predecessors, Health and Human Services Secretary Tom Price last week took private jets on five separate flights for official business, at a cost of tens of thousands of dollars more than commercial travel,” Politico reports.

“The travel by corporate-style jet comes at a time when other members of the Trump administration are under fire for travel expenditures… Price, a frequent critic of federal spending who has been developing a plan for departmentwide cost savings, declined to comment.”

Sarah Kliff: “I have spent the bulk of 2017 writing about the different Republican plans to repeal the Affordable Care Act. Graham-Cassidy, in my view, is the most radical of them all.”

“While other Republican plans essentially create a poorly funded version of the Affordable Care Act, Graham-Cassidy blows it up. The bill offered by Republican Sens. Lindsey Graham and Bill Cassidy takes money from states that did a good job getting residents covered under Obamacare and gives it to states that did not. It eliminates an expansion of the Medicaid program that covers millions of Americans in favor of block grants. States aren’t required to use the money to get people covered or to help subsidize low- and middle-income earners, as Obamacare does now.”

“Plus, the bill includes other drastic changes that appeared in some previous bills. Insurers in the private marketplace would be allowed to discriminate against people with preexisting conditions, for example. And it would eliminate the individual mandate as other bills would have, but this time there is no replacement. Most analysts agree that would inject chaos into the individual market.”

Sam Baker: “The Senate’s health-care overhaul would quickly pull $215 billion in federal funding out of the health care system, and those cuts could later grow as high as $4 trillion, according to a new analysis from the consulting firm Avalere Health.”

President Trump “is using targeted Facebook ads to reassure supporters that he still plans to build the border wall after his recent public comments caused many to question whether he would keep his promise,” BuzzFeed reports.

“The ads are not visible on the timelines of the Trump or Pence Facebook pages. They are therefore so-called ‘dark post ads’ because they can only be seen by people the campaign chose to target with the message. This is the same type of ad Facebook recently acknowledged was purchased by a Russian troll factory in order to target Americans during the election.”

Katy Tur: there are no protections for essential health care benefits in Graham-Cassidy

Sen. Barasso: There shouldn't be pic.twitter.com/eXYLoU5PNb

President Trump “is using money donated to his reelection campaign and the Republican National Committee to pay for his lawyers in the probe of alleged Russian interference in the U.S. election,” Reutersreports.

“The U.S. Federal Election Commission allows the use of private campaign funds to pay legal bills arising from being a candidate or elected official.”

“While previous presidential campaigns have used these funds to pay for routine legal matters such as ballot access disputes and compliance requirements, Trump would be the first U.S. president in the modern campaign finance era to use such funds to cover the costs of responding to a criminal probe, said election law experts.”

Bloomberg: “Four months as a communications adviser to Donald Trump’s campaign have turned Michael Caputo’s life upside down. Since congressional investigators decided they wanted to interview Caputo as part of an investigation into Russia’s interference in the 2016 election, he’s drained his children’s college fund to pay more than $30,000 in legal fees, he said. He bought guns for his home and office after receiving death threats. He worries about the stress on his wife and daughters.”

“Outside the spotlight, a large cast of peripheral characters are finding themselves drawn into the probe, incurring legal fees that can run up to $1,000 an hour and infecting the West Wing and Trump’s orbit with a deep paranoia.”

President Trump’s nominee for a federal judgeship in Texas, Jeff Mateer, once described transgender children as evidence of “Satan’s plan,” lamented that states were banning conversion therapy and argued that sanctioning same-sex marriage would lead to polygamy and bestiality, CNN reports.