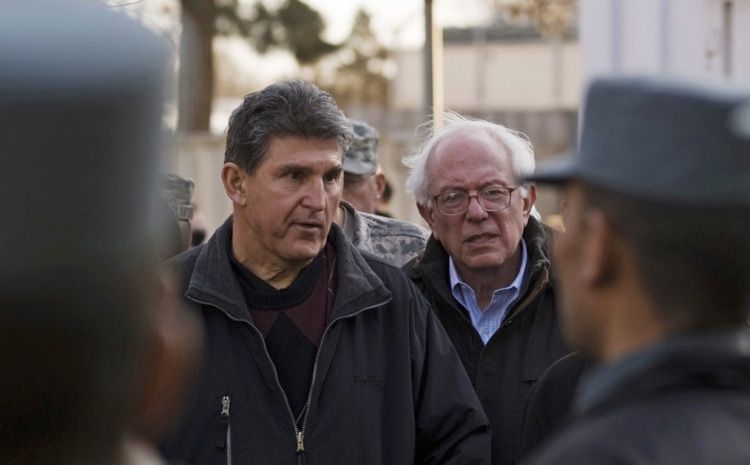 MANCHIN FOR SINGLE PAYER. “The Senate’s most conservative Democrat said Tuesday Congress should consider adopting a single-payer health-care system, a sign of how fast politics are shifting on what was once seen as a fringe issue on the left,” Bloomberg reports.  Said Manchin: “It should be explored. I want to know what happens in all the countries that have it — how well it works or the challenges they have.”

Bernie Sanders is introducing his Medicare for all bill today.  More coverage on the details of the bill tomorrow.  But the floodgates of support for Single Payer opened when former Senator Max Baucus, the chairman who managed the Obamacare bill but refused to consider single payer back in 2009, signaled that he was now in favor of it.

THANK YOU EDIE. Edie Windsor, whose name became synonymous with marriage equality after her landmark legal challenge of the Defense of Marriage Act, died Tuesday in Manhattan at the age of 88. Windsor’s 2013 victory at the Supreme Court eventually opened the door to marriage equality nationwide, by serving as a judicial stepping stone to the national constitutional right to marriage equality, which would come two years later.

TRUMP’S SALES PITCH FOR TAX CUTS FOR THE WEALTHY.  President Trump “plans an aggressive travel schedule, taking him to as many as 13 states over the next seven weeks, to sell the idea of a tax overhaul as the administration tries to avoid repeating the communications failures of its attempt to repeal Obamacare,” Bloomberg reports.

“With a make-or-break legislative battle looming on taxes, the White House is moving to clean up a disorganized communications operation, said four people familiar with the effort.”

Playbook: “Republicans have not yet passed a budget — a prerequisite for tax reform. There’s talk they’ll take it up in the House in the last week of September, but the support is not nearly firm enough yet. There’s a chance there is no final action on the budget until October or November. Without a budget, tax reform talks are just that, talk.”

A REVIEW OF WHAT HAPPENED. I am reading it now.  But Thomas Frank reviews Hillary Clinton’s What Happened:  “That Clinton might have done well to temper her technocratic style with some populist outrage of her own only dawns on her towards the end of the book, by which point it is too late.  Not to mention impossible. Hillary Clinton simply cannot escape her satisfied white-collar worldview – compulsively listing people’s academic credentials, hobnobbing with officers from Facebook and Google, and telling readers how she went to Davos in 1998 to announce her philosophy.

And then, in her concluding chapter, returning to her beloved alma mater Wellesley College and informing graduates of that prestigious institution that, with their “capacity for critical thinking” (among other things) they were “precisely what we needed in America in 2017.”   I wish it were so. I wish that another crop of elite college grads were what we needed. I wish Hillary’s experts and her enlightened capitalist friends could step in and fix this shabby America we inhabit today, where racists march in the streets and the Midwest falls apart and cops shoot motorists for no reason and a blustering groper inhabits the White House.  I wish it were all a matter of having a checklist of think-tank approved policy solutions. But I know for sure it isn’t. And voters knew that, too.”

The only problem in American politics is the Republican party https://t.co/BuJL1uQrlS pic.twitter.com/mqjmj558e0

THE CONSTITUTIONAL CONVENTION HORROR.  Hillary Clinton on Tuesday warned that if President Donald Trump were “left to his own devices,” he would take steps to emulate authoritarian leaders like Russian President Vladimir Putin.  Asked on the liberal podcast “Pod Save America” whether she thinks Trump might take steps to emulate Putin and his regime, Clinton said, “Yes.”

“I think Trump, left to his own devices, unchecked, would become even more authoritarian than he has tried to be,” she said. “I’m not saying he’s going to start killing journalists, but I am saying that he likes the idea of unaccountable, unchecked power. And we’ve never had to face that in a serious way in our country.”   She cited the Republican practice of gerrymandering “to control state legislatures, elect Republican governors and to call a constitutional convention.”

“And if you really get deep into what they’re advocating — limits on the First Amendment, no limits on the Second Amendment, limits on criminal justice — I mean, there is a very insidious right-wing agenda,” Clinton said.  She called it “a very clear agenda that is hard for Americans to really kind of wrap our heads around because we’ve never had to deal with anything like this before.”

“We’ve got to pay attention to it,” Clinton said. “Because the one thing we can do to reign it in, besides fulminating online or, you know, speaking or writing books, is to do everything possible to take back the House in 2018 and hold the line in the Senate. There is no more important mission.”

THE CDC HAS BEEN GAGGED.  According to an email obtained by Axios, staff at the Centers for Disease Control—an organization that’s vital to protecting public health—has been directed to not communicate with the public via the press.

“The message—sent by public affairs officer Jeffrey Lancashire and dated Aug. 31—instructs all CDC employees not to speak to reporters, “even for a simple data-related question.”

What it said: “Effective immediately and until further notice, any and all correspondence with any member of the news media, regardless of the nature of the inquiry, must be cleared through CDC’s Atlanta Communications Office,” Lancashire wrote. “This correspondence includes everything from formal interview requests to the most basic of data requests.””

“Mr. Bannon said he most recently spoke with Mr. Trump the previous night for an hour…White House press secretary Sarah Huckabee Sanders told reporters on Monday that she thought Mr. Bannon had spoken with the president once since leaving his role in the administration.”

CRACKING UP: “The Republican Party likes to think of itself as a big tent — not always a harmonious one, but full of all types,” the New York Times reports.  “In the minds of many, however, it’s grown too full, and badly needs an excision. Now more than at any point in its modern history, the party has reached such a breaking point that historians, political analysts and Republicans themselves say it faces the possibility of splintering and spawning a third party.”   Historian Michael Beschloss said the conditions were so ripe for a split: “I’ve been startled that this has not happened.”

MUELLER TIME: Mike Allen reports that special counsel Robert Mueller “is burrowing in hard on the obstruction of justice angle.”  “Republicans close to the White House say every sign by Mueller — from his hiring of Mafia and money-laundering experts to his aggressive pursuit of witnesses and evidence — is that he’s going for the kill.”

“Trump allies fret that the White House is ill-prepared for the public showdown with Mueller that will eventually come, and should be making legal, political and constitutional arguments for the president’s right to fire Comey. Statements by Trump lawyers tend to rattle, rather than reassure, White House allies.”

THE VOTER SUPPRESSION COMMISSION. Jeffrey Toobin: “The results of Trump’s voting commission are preordained. It will inevitably seek to impose measures that will have the effect of erecting barriers to voting for poor people, who generally vote Democratic. The commission will call for requiring more forms of identification to register, and the possession of photo identification to actually cast ballots. In addition, the commission will almost certainly pursue limitations on early voting and absentee balloting, all as part of a supposed effort to combat fraud. During the Obama Administration, the Justice Department, under Eric Holder and then Loretta Lynch, got courts to limit some of the worst voter-suppression efforts, especially those in Texas and North Carolina. But Attorney General Jeff Sessions has withdrawn from this undertaking, and, just as he did when he was a senator, he has embraced the vote-suppression agenda.”

“If the President had the slightest inclination toward bipartisanship, as some appear to think he displayed last week, he would disband the fraud commission. It exists solely to help the Republican Party, with no residual benefits for anyone else in the country. Trump, of course, will not disband it, and his failure to do so will be the clearest evidence (if any is needed) that there was no pivot last week, but at most a very slight detour on the road to an electoral future of Republican dominance.”

Your @ScottPruittOK, EPA-approved chart of the appropriate time to discuss climate change and its impact on major storms. pic.twitter.com/W2GVqNZ5Wc

RUSSIA WANTED A BROAD RESET WITH TRUMP.  “The proposal, spelled out in a detailed document obtained by BuzzFeed News, called for the wholesale restoration of diplomatic, military and intelligence channels severed between the two countries after Russia’s military interventions in Ukraine and Syria.”

“The broad scope of the Kremlin’s reset plan came with an ambitious launch date: immediately.”

“Besides offering a snapshot of where the Kremlin wanted to move the bilateral relationship, the proposal reveals one of Moscow’s unspoken assumptions – that Trump wouldn’t share the lingering US anger over Moscow’s alleged interference in the 2016 election and might accept a lightning fast rapprochement.”