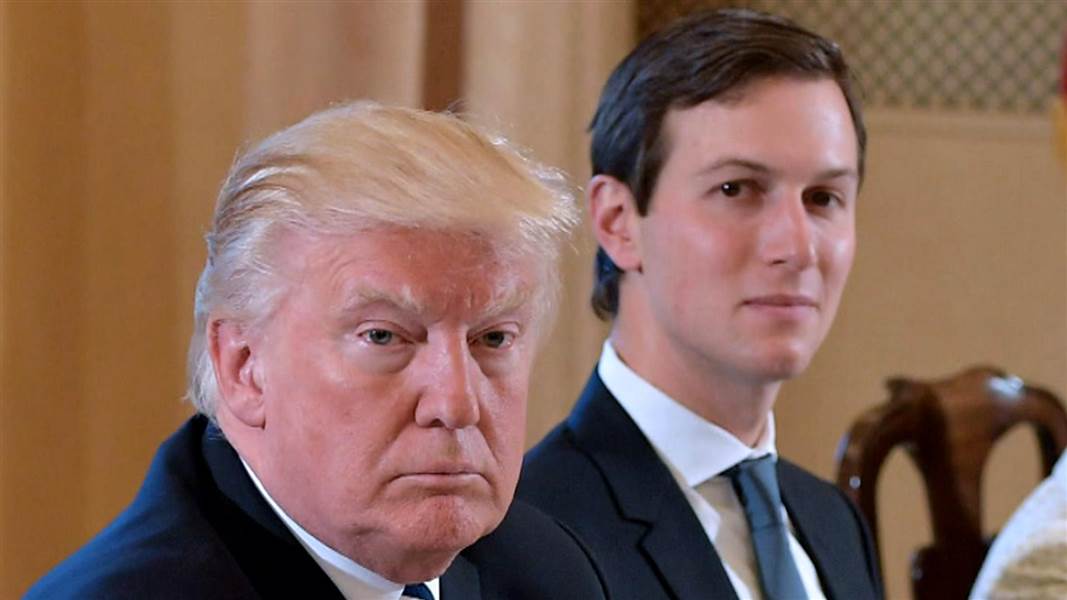 TRUMP LAWYERS WANT KUSHNER OUT: “Some of President Trump’s lawyers earlier this summer concluded that Jared Kushner should step down as senior White House adviser because of possible legal complications related to a probe of Russia’s involvement in the 2016 presidential election and aired concerns about him to the president,” the Wall Street Journal reports.

“Among their concerns was that Mr. Kushner was the adviser closest to the president who had the most dealings with Russian officials and businesspeople during the campaign and transition, some of which are currently being examined by federal investigators and congressional oversight panels. Mr. Kushner, Mr. Trump’s son-in-law and confidant, has said he had four such meetings or interactions.”

“Another issue was Mr. Kushner’s initial omission of any contacts with foreign officials from the form required to obtain a security clearance.”

My damage assessment of the Trump presidency. https://t.co/GlqIjbR5m4

Said McConnell: “Let’s put it this way. The deal is not quite as good as my counterpart thought it was.”  “The reason? Mr. McConnell said that he insisted the newly passed legislation preserve Treasury’s ability to apply ‘extraordinary measures’ and shift money within government accounts to pay off debt and extend federal borrowing power. That will delay the need for another increase in the debt limit well beyond the December deadline that Democrats have been trumpeting as their big moment of leverage.”

I don’t think we have been gleeful or exuberant.  We have been smugly laughing at the situation.   And Mitchy Poo, delaying the debt ceiling vote in an election year is even better for us.  Bad for you.   Toodles.

STEVE BANNON’S WAR ON THE GOP: President Trump’s closest allies “are planning a slate of primary challenges against Republican senators, potentially undermining the party’s prospects in 2018 and further inflaming tensions between GOP leaders and the White House,” Politico reports.

“The effort is being led by Steve Bannon, Trump’s bomb-throwing former chief strategist who is launching an all-out war against Senate Majority Leader Mitch McConnell and the Republican establishment. Bannon has begun holding private meetings with insurgent challengers, vowing his support. He’s coordinating with conservative mega-donor Robert Mercer, who is prepared to pour millions of dollars into attacks on GOP incumbents. Bannon has also installed a confidant at an outside group that is expected to target Republican lawmakers and push the Trump agenda.”

“Bannon, in an interview on CBS’s 60 Minutes, accused Senate Majority Leader Mitch McConnell (R-Ky.) and House Speaker Paul D. Ryan (R-Wis.) of ‘trying to nullify the 2016 election.’ … He blamed them for failing to repeal and replace former president Barack Obama’s signature health-care law and made clear that he would use his Breitbart perch to hold Republicans accountable for not helping Trump push through his agenda.””

NEW: Russian politician says US "intelligence missed it when Russian intelligence stole the president of the US" https://t.co/FEQhfqXLfn

Vyacheslav Nikonov,  a member of the Russian parliamentary body, said on Russian television that U.S. intelligence “missed it when Russian intelligence stole the president of the United States,” The Hill reports.  Nikonov was making the point about the superiority of Russia’s intelligence services over U.S. regarding knowledge of North Korea, Afghanistan and Syria.

SESSIONS WANTS LIE DETECTORS TESTS: “Attorney General Jeff Sessions has told associates he wants to put the entire National Security Council staff through a lie detector test to root out leakers. It’s unclear whether this will ever happen, but Sessions floated the idea to multiple people, as recently as last month,” according to Jonathan Swan.

“Sessions’ idea is to do a one-time, one-issue, polygraph test of everyone on the NSC staff. Interrogators would sit down with every single NSC staffer (there’s more than 100 of them), and ask them, individually, what they know about the leaks of transcripts of the president’s phone calls with foreign leaders. Sessions suspects those leaks came from within the NSC, and thinks that a polygraph test — at the very least — would scare them out of leaking again.”

THE CONSERVATIVE SEA CHANGE IN THE BUREAUCRACY: New York Times: “The aggressive regulatory effort, which runs counter to the Trump administration’s less-is-more credo about government meddling, has led to policy changes related to gun ownership, gay rights, reproductive choices, immigration and other divisive political issues, according to a New York Times review of government documents and court records, as well as interviews with more than four dozen people involved in or briefed on the efforts.”

“The overhaul is unfolding behind the scenes in Washington at agencies like the Health and Human Services Department, where new rules about birth control are being drafted, and in federal courtrooms, where the Justice Department has shifted gears in more than a dozen Obama-era cases involving social issues.”

A week after Trump announced his run for POTUS, he formed more biz entities than on any prev day, all in Indonesiahttps://t.co/SFWZak1Yl1

THIS WEEK IN “NO SHIT:” Stephen Bannon believes the firing of FBI director James Comey by President Trump was the biggest mistake “maybe in modern political history,” the Washington Post reports. Said Bannon: “I don’t think there’s any doubt that if James Comey had not been fired we would not have a special counsel.”

THIS WEEK IN “DO WHAT I SAY, NOT WHAT I DO:” McClatchy: “A major construction company owned by the Chinese government was hired to work on the latest Trump golf club development in Dubai despite a pledge from Donald Trump that his family business would not engage in any transactions with foreign government entities while he serves as president.”

16 years ago, today, Trump talked about how his building was now the tallest one since the World Trade Center fell. pic.twitter.com/Dcr8OLF695

HERE COMES THE WAVE: Sen. Bob Corker (R-TN), “the influential chairman of the Senate foreign relations committee who was once considered for a spot in President Trump’s Cabinet, is weighing whether to call it quits next year,” CNNreports.

Meanwhile, Rep. Dave Trott (R-MI) says he will not run for re-election next year, WILX reports. In a statement Monday, the two-term lawmaker says serving has been an honor but he has decided that the best course is “to spend more time with my family and return to the private sector.”  This is in addition to the retirements announced last week by Charlie Dent of Pennsylvania and Dave Reichert of Washington.

BOOKER’S RUNNING: Sen. Cory Booker (D-NJ) told NJTV News that he is co-sponsoring Sen. Bernie Sanders’ (I-VT) single-payer health care bill, called “Medicare for All,” which would expand the federal health care program that covers those over 65 to all Americans.

Said Booker: “This is something that’s got to happen. Obamacare was a first step in advancing this country, but I won’t rest until every American has a basic security that comes with having access to affordable health care.”

Sources tell UtahPolicy.com that former Massachusetts Gov. Mitt Romney is preparing to run for Senate in 2018 if Sen. Orrin Hatch decides to retire.  “Hatch’s reticence to make a definitive announcement is preventing other candidates from getting in the race, but Romney has the financial resources to mount a campaign no matter when Hatch decides.”

Hillary Clinton, whose book What Happened is out today, told USA Today she’s “convinced” that Trump allies colluded with Russia in the 2016 presidential election.

She added: “I happen to believe in the rule of law and believe in evidence, so I’m not going to go off and make all kinds of outrageous claims. But if you look at what we’ve learned since (the election), it’s pretty troubling.”