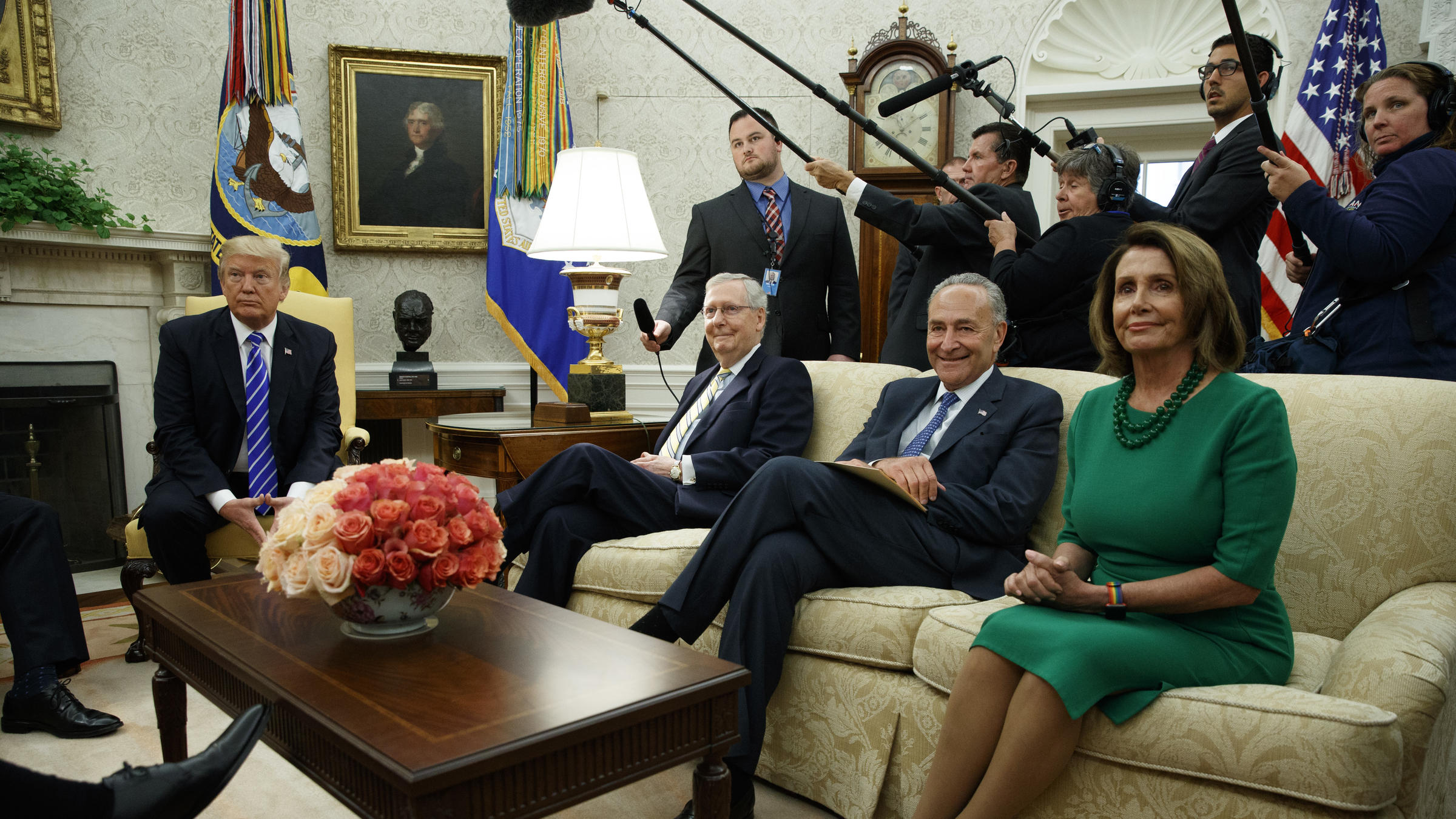 President Trump and congressional leaders “agreed to increase the debt limit and fund the government until mid-December, after the president sided with Democratic leaders over reluctant Republicans on a deal that would set up a fiscal showdown for year’s end,” the New York Times reports.

Republicans: Wait, wha—I mean, you did good, Donald! A+ for effort!https://t.co/4gAN8aILV8

Washington Post: “The president’s decision, confirmed by Republicans, came barely an hour after Speaker Paul Ryan (R-WI) panned the idea of a brief debt hike, accusing Democrats of ‘playing politics’ with much needed Harvey relief by trying to create pressure for their agenda. Democrats believe this extension into December would increase their leverage on Republicans to secure stabilization funds for health-care markets and resolve the legal status of undocumented immigrants brought to the United States as children.”

Said one Republican to Axios: “Dems bluffed their way into total victory. They win the politics of DACA and leverage on debt in the winter. The fate is sealed – DACA will be reauthorized without strings, Schumer has inserted himself into all negotiations in the winter, including tax, spending and immigration.”

Why Trump snubbed his party to side with the Democrats in the debt ceiling fight: https://t.co/gCGo0R0FUH pic.twitter.com/1Nx2Ss3S9a

Also, this is why Nancy Pelosi is still our leader.  It is because she is good, and knows what she is doing.   Meanwhile, her Berniecrat opponent in Ohio’s Tim Ryan is supporting Trump’s corporate tax cuts.

REPUBLICANS ARE FURIOUS. President Trump’s stunning deal with Democrats to extend the debt ceiling and keep the government open for three months — along with funding for a hurricane relief package — has really angered Republicans.  Politico says they are “seething”:

“Trump’s deal with Democrats doesn’t appear to help Republicans at all. While it averts a fall government shutdown and a default on the nation’s debt until at least December, it also emboldens Democrats to push for immigration changes or spending priorities without giving an inch to the right.

Congress will likely have to strike a major bipartisan fiscal deal in December to raise the debt ceiling long term and keep the government open for the remainder of fiscal 2018. And Republican lawmakers on both sides of the Capitol complained Wednesday that Trump probably just undercut leadership in those future negotiations, making it even harder for them to secure legislative wins.”

Jonathan Swan: “One top Republican described the move to me as the legislative equivalent of giving an entire stockpile of weapons to Democrats and inviting them to take the entire Republican Party hostage. Republicans are in a state of shock.”

“Sources inside and close to leadership have used the full range of expletives in text messages reacting to what Trump did this morning.”

“When the debt ceiling and government funding bills expire in December, Democrats will have all the leverage, because Republicans can’t pass a CR or debt ceiling without Democratic votes. That will also force Republicans to support a funding bill that legalizes the protection of illegal immigrants who were brought to the U.S. as children (the DACA program that Trump says he’ll end in six months if Congress doesn’t act.)”

The Fix: “It’s beginning to get ridiculous for GOP leaders. That bargain they struck with Trump was always a tenuous and uneasy one, and he’s now openly violating it.”

WHY DID TRUMP DO IT?  The Daily Beast reports: “Multiple West Wing sources told The Daily Beast how the president was looking to strike a quick and easy deal—and that his speed reaching this specific arrangement was in part ensured by his resentment towards Republican leaders, who Trump views as hostile, insufficiently loyal, and impotent. It was well-known within the White House that President Trump, going into the meeting, was “not looking to do [Ryan and McConnell] any favors,” as one White House official put it.

Simply put, the president made a “deliberate decision not to care about Ryan’s feelings” and did what he wanted, another White House adviser said.

“I think it was calculated, in his unique way. Republicans can’t get anything done, so maybe the other side will,” a senior Trump administration official said of the deal, which will forestall a government shutdown until mid-December and allow the government to continue borrowing money until around the same time. “At the very least,” the administration official added, “it says, ‘don’t take me for granted.’”

Trump really does not belong the Republican Party.  He has no conservative per se ideology. Sure, he is a racist, an authoritarian monster, a fascist, a tax cutter and a misogynist like most Republicans.  But those qualities are what endeared Republicans to Trump, and not the other way around.  Trump just wanted an easy win.  This gives him a short term easy win in that he  gets to sign a very popular hurricane relief bill while keeping the federal government open. But in the long term, he just screwed the entire legislative agenda for the GOP.

DINING WITH THE ENEMY. President Trump and Senate Majority Leader Mitch McConnell met privately on Tuesday before the joint bipartisan meeting with the Congressional Leadership on Wednesday “in a bid to repair their badly frayed relationship,” Politico reports.  “The meeting was an apparent attempt to clear the air after a contentious August recess between the two, mostly fueled by the Senate’s failure to repeal Obamacare.”  Playbook reports that “Trump is dining with Speaker Paul Ryan tonight, just a day after the president tossed Ryan, Senate Majority Leader Mitch McConnell, Treasury Secretary Steven Mnuchin, House and Senate Republicans under the bus.”

WaPo: Facebook told investigators that it sold ads during the election to a Russian biz seeking to target voters. https://t.co/jxmbcS6a5t

FACEBOOK PROVIDES MORE EVIDENCE OF COLLUSION. Facebook told congressional investigators that it has discovered it sold ads during the U.S. presidential election to a shadowy Russian company seeking to target voters, the Washington Post reports.

“A small portion of the ads, which began in the summer of 2015, directly named Republican nominee Donald Trump and Democrat Hillary Clinton, the people said. Most of the ads focused on pumping politically divisive issues such as gun rights and immigration fears, as well as gay rights and racial discrimination.”

In July, a Facebook spokesperson told CNN that “We have seen no evidence that Russian actors bought ads on Facebook in connection with the election.”

IVANKA THE MEETING ENDER. New York Times: “Mr. Trump often invites his daughter Ivanka Trump into meetings to signal their conclusion — or to keep his interlocutors off balance. When Ms. Trump entered the office toward the end of the discussion on Wednesday, ostensibly to discuss tax reform, Republicans in the room reacted with astonishment and annoyance.”

“Mr. McConnell, who is barely on speaking terms with the president, quietly seethed, according to two people familiar with the situation. He breezed past other lawmakers and staff members in purse-lipped silence when he returned to the Capitol.”

Republican leaders on the Hill were “visibly annoyed” that Ivanka Trump joined an Oval Office meeting to “say hello” during thei meeting with President Trump on a must-pass spending bill, The Hill reports.

FREEDOM CAUCUS TO RELEASE THEIR OWN TAX PLAN.  I am sure it will be sensible. Jonathan Swan: “The House Freedom Caucus — a group of around 35 ultra-conservative House Republicans who can block their party’s leadership on key legislation — is in the final stages of drafting its own tax plan.”

“Instead of raising new sources of money to ensure their tax cuts don’t add to deficits, the Freedom Caucus is planning to embrace a non-traditional idea to extend the budget window. The idea, pushed by some conservatives, including Sen. Pat Toomey, is to change budget rules so that tax cuts that add to the deficit can last for 20 years or longer, rather than expiring after 10 years.”

“It’s a move designed to unsettle Republican leaders Paul Ryan and Mitch McConnell, who’ve been working behind closed doors to craft a tax plan with the White House.”

“Leaders of the Freedom Caucus met with House Speaker Paul D. Ryan (R-WiI) on Wednesday to candidly express their frustrations with his leadership and his handling of the Republican legislative agenda, according to two people familiar with the discussion,” the Washington Post reports.

“The exchange comes as former White House chief strategist Stephen Bannon is having conversations with hard-line GOP lawmakers about how they should exert greater influence in the fall’s political fights and pressure congressional Republican leaders.”

Conservatives lawmakers “have begun to discuss who could replace Ryan as speaker, should conservatives rebel against him.”

Joshua Green: “The Republican bounty from Donald Trump’s unexpected presidential victory last November was the rare opportunity it afforded the GOP to enact an agenda without Democratic input. Because Republicans won control of the White House and both houses of Congress, nothing could inhibit them—in theory—from passing their preferred legislation. This happy scenario was the culmination of Republican fantasy: As the veteran conservative activist Grover Norquist once put it, Republicans needed only to elect a president ‘with enough working digits to handle a pen’ to sign those bills into law.”

“Under Trump, Norquist’s fantasy has given way to a sobering reality. Rather than sign off on a succession of Republican bills, President Trump has instead managed to exacerbate nearly every major division within the GOP, whether cultural or political.”

GOP leaders are furious with their president, and this photo shows why. https://t.co/I0fX1YiDvN pic.twitter.com/8hPUIgQzKx

CNN has learned that President Trump “will host the members of his Cabinet at the secluded government-owned retreat in Maryland starting Friday. They are expected to discuss a wide range of issues, spanning from the administration’s legislative strategy for tax reform to the growing nuclear crisis in North Korea.”

Sen. John McCain (R-AZ) told The Hill that he “supports a newer version of an Obamacare repeal-and-replace bill, throwing some support behind the last-ditch effort.”  “McCain said he backs a bill from Sens. Lindsey Graham (R-SC) and Bill Cassidy (R-LA) that would convert Obamacare spending into block grants for states.”

“Dozens of lobbyists, contractors and others who make their living influencing the government pay President Trump’s companies for membership in his private golf clubs, a status that can put them in close contact with the president,” a USA Today investigation found.

“Members of the clubs Trump has visited most often as president — in Florida, New Jersey and Virginia — include at least 50 executives whose companies hold federal contracts and 21 lobbyists and trade group officials. Two-thirds played on one of the 58 days the president was there, according to scores they posted online.”

“Because membership lists at Trump’s clubs are secret, the public has until now been unable to assess the conflicts they could create. USA Today found the names of 4,500 members by reviewing social media and a public website golfers use to track their handicaps, then researched and contacted hundreds to determine whether they had business with the government.”