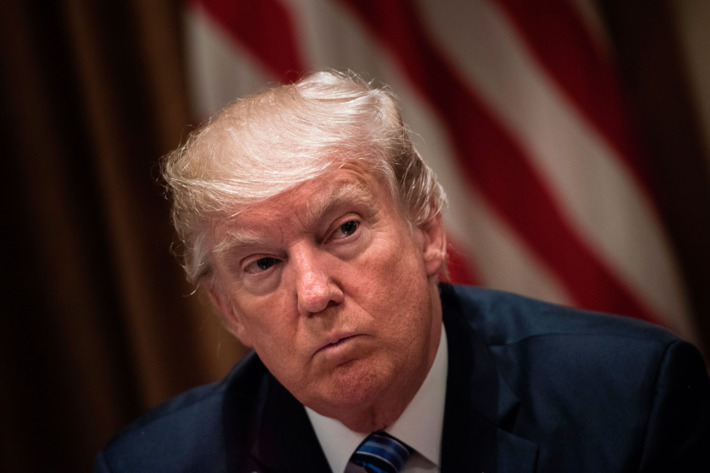 Associated Press: “Since the day he launched his presidential campaign, Donald Trump has talked tough on immigration, promising to take the kind of decisive action he accused other politicians of avoiding. This week, he waffled.”

“Trump passed off responsibility for the fate of the 800,000 young immigrants brought to the United States illegally as children to a Congress that has shown little ability to tackle politically fraught issues. He gave lawmakers six months to act, then said in a Tuesday night tweet that he would ‘revisit this issue’ if they didn’t. He sent Attorney General Jeff Sessions out to be the face of the controversial policy, effectively ceding one of the central roles of the presidency: explaining difficult decisions to the American people.”’

He is weak, weak, weak.  The most ineffectual president in all history.   It really is amazing.   And yet, he is still damaging the Republican Party for decades to come.

“President Trump’s decision to rescind a popular program that protected the most sympathetic of immigrants here illegally — those who were brought as children by their parents — poses a huge threat to his party, forcing Republican lawmakers to choose between the party’s nativist wing, which strongly opposes any move resembling amnesty, and those who favor a more flexible approach to minority communities,” the Los Angeles Times reports.

“The worst-case scenario for many GOP lawmakers: If Congress stalls again, next year’s midterm election campaigns could be accompanied by thousands of young people each week being fired from their jobs or kicked out of school, and ultimately by some being deported to countries they have not seen since they were toddlers.”

A White House memo distributed Tuesday guided legislators to stick to the talking points that DACA, or Deferred Action for Childhood Arrivals, recipients should prepare for deportation, according to the document obtained by ABC News.

The Department of Justice officially announced Tuesday that it would end DACA in six months. The program, which was created by former President Barack Obama through executive order, protects undocumented immigrants who were brought to the U.S. as minors from deportation.

And while the White House and President Donald Trump are urging Congress to come up with a legislative solution for the issue, the talking points from the administration told Congress that DACA recipients should “prepare for and arrange their departure from the United States.”

An entire country is being held hostage by a thin slice of the Republican electorate, who answer to no one: https://t.co/Cl019YSgY4

“The president and White House staff have continued to work with Sens. Lindsey Graham (R-SC) and Bill Cassidy (R-LA) over the summer on their proposal to block grant federal health care funding to the states. And though the bill is being rewritten and Congress faces a brutal September agenda, Trump and his allies on health care are making a last-gasp push,” Politico reports.

Playbook: “There is little chance the Senate will take up an Obamacare repeal vote. McConnell has moved on. Senate Republicans, for the most part, have too.”

To target hopeful young strivers who grew up here is wrong, because they’ve done nothing wrong. My statement: https://t.co/TCxZdld7L4

Said Obama: “To target these young people is wrong — because they have done nothing wrong. It is self-defeating — because they want to start new businesses, staff our labs, serve in our military, and otherwise contribute to the country we love. And it is cruel.”

“The lengthy statement is among Obama’s most forceful since departing office. He sharply criticized Trump’s motives and insisted rescinding the program — called DACA — was not legally required.

President Trump “is increasingly fixated on slashing the top corporate tax rate to 15 percent – a level that pretty much no one else working on the issue in the White House or Congress thinks is workable,” Politicoreports.

“In a White House meeting on Tuesday, Trump again expressed his strong desire to hit the 15 percent target, from today’s 35 percent.”

Said one senior official: “You can’t get to 15 percent and anyone who has a back of an envelope can make that calculation. And he may not like that truth, but it’s the truth. It’s just math.”

Politico: “President Trump’s White House will move Wednesday to quash growing GOP opposition to a strategy to raise the debt ceiling as part of a Hurricane Harvey relief package.”

“Administration officials will inform lawmakers that they will not be able to pay FEMA disaster claims for victims without a simultaneous increase of the debt ceiling, the sources said. House lawmakers are also being told by GOP leaders that Trump will give a full-throated endorsement to their plan to pair the two bills and send them to the Oval Office this week — without a penny worth of spending cuts long demanded by conservatives and even Republican leadership allies.”

Playbook: “The Senate plans to amend the Harvey relief bill with a debt-limit increase that will last through the end of 2018. Why? Most lawmakers would rather not have to vote to lift the debt limit more than once this Congress. There is talk of also attaching a continuing resolution, which would keep government open, but aides and lawmakers we spoke to say they do not think they’ll have enough time to get it ready this week.”

David Wasserman: “Almost exactly eight years ago, I argued that Democrats were in deep danger because 2010 could be the ‘Year of the Angry White Senior.’ The premise was simple: Midterm elections had always skewed toward older voters, but never before had there been such a generational divide. In 2008, Barack Obama carried voters 18 to 29 by 34 percentage points but lost seniors by 8 points — a whopping 42-point gulf. Sure enough, Democrats’ young base stayed home in the midterms, and they lost 63 House seats.”

“Eight years later, there’s an analogous dynamic working the opposite way. Midterms have always skewed toward college-educated voters, but never before has there been such an educational divide, particularly among whites. In 2016, exit polls found that Donald Trump carried white voters with a college degree by just 3 percentage points, but won whites without a college degree by 37 points — a massive 34-point gap. By contrast, this gap was just 14 points in 2008.”

‘If they deport all of us, who will rebuild?’ Undocumented workers could be key to Texas recovery. https://t.co/1AOwlDBzoY

A new Politico/Morning Consult poll finds voters overwhelmingly support allowing undocumented immigrants brought to the U.S. as children to stay in the country.

#Breaking: Students at Denver schools are walking out of classes in protest of #DACA announcement
WATCH: https://t.co/fYKBG4jvCA pic.twitter.com/ErH0Hz86oq

Now here is an interesting twist on Trump’s decision to re-negotiate NAFTA: “Canadian negotiators are demanding the United States roll back so-called “right to work” laws – accused of gutting unions in some U.S. states by starving them of money – as part of the renegotiation of the North American free-trade agreement. The request is part of a push by Ottawa to get the U.S. and Mexico to adopt higher labour standards under the deal.”

Inside Steve Bannon's meeting with Mark Meadows via @axios https://t.co/0t9kBI4w7A

Paul Krugman: “So this is a double blow to the U.S. economy; it will make everyone worse off. There is no upside whatever to this cruelty, unless you just want to have fewer people with brown skin and Hispanic surnames around. Which is, of course, what this is really all about.”

A Russian politician has threatened to “hit Donald Trump with our Kompromat” on state television, the Independent reports.  “Speaking on Russia-24, Nikita Isaev, leader of the far-right New Russia Movement, said the compromising material should be released in retaliation over the closure of several Russian diplomatic compounds across the US.”

When asked whether Russia has such material, Mr Isaev replied: “Of course we have it!”